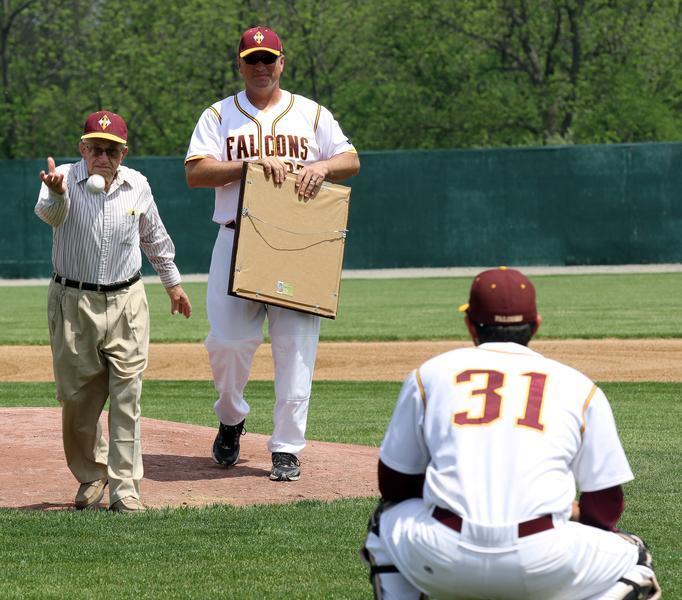 Bob Traxler throws out the ceremonial first pitch during a 2012 Indian Hills baseball doubleheader. Traxler will join former Indian Hills president Lyle Hellyer as the first two “Lifetime Contribution” award winners for the Indian Hills Athletic Hall-of-Fame next weekend. Traxler has been an ardent supporter of the Indian Hills baseball program for over three decades, spending countless hours working on the Falcons’ fields and other facilities while also working behind the scenes to make the IHCC program one of the finest in the Midwest.

OTTUMWA — Bob Traxler, a longtime contributor and supporter of the Indian Hills athletic department, passed away on Sunday at the Golden Age Care Center in Centerville. The native of Exline and IHCC Athletic Hall-of-Fame member was 103.

Traxler was ardent supporter of the IHCC baseball program for over three decades, being honored in May of 2012 with “Bob Traxler Appreciation Day” at Pat Daugherty Field. In 1985, Traxler began helping with the project helping with grounds and building maintenance for the Indian Hills baseball at first before helping the facility grow in many different ways, building bleachers, installing lighting, scoreboards and fencing all while doing it all at no charge to the college.

Traxler also assisted with the construction of the press box, concession stand and the dugouts at Daugherty Field. Besides helping in building the home field of IHCC baseball, Traxler also helped the Falcons get to their games across the country driving the bus for both the IHCC baseball and basketball programs.

Traxler, a lifelong native of Appanoose County, was honored in 2014 as one of the first two “Lifetime Contribution” inductees into the Indian Hills Athletic Hall-of-Fame.

“The good Lord gave me the ability to do these things, and that’s what I’ve done,” he said about his lifelong commitment to using his talents to help others. “I have no regrets.”