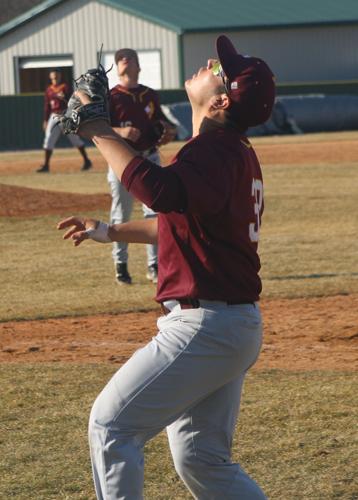 Indian Hills first baseman Sergio Chavez looks to make a catch in for territory in front of Warrior teammates Dade Hensley and Gerardo Villarreal during the ninth inning of a 3-1 home-opening win for the IHCC baseball team over St. Cloud State on Tuesday afternoon at Pat Daugherty Field in Centerville.

Indian Hills first baseman Sergio Chavez looks to make a catch in for territory in front of Warrior teammates Dade Hensley and Gerardo Villarreal during the ninth inning of a 3-1 home-opening win for the IHCC baseball team over St. Cloud State on Tuesday afternoon at Pat Daugherty Field in Centerville.

CENTERVILLE – Some teams live or die with raw emotion, using positive energy to propel them to incredible achievements.

With the Indian Hills baseball team, it's a double-edged sword according to head coach Matthew Torrez.

"They don't care and they don't care," Torrez said. "They don't care who's over there (in the opposing dugout). They don't care if it's game one at home. They just keep doing their thing and try to keep getting better. You wouldn't know if it's Game 7 of the World Series or a game in the middle of the year. That's both the good and bad with them. It's good that they don't let the opponent or the stage faze them, but it can also be bad at times when the energy starts going down a little bit."

Indian Hills started strong, then held on late to pick up a win over St. Cloud State in the home opener at Pat Daugherty Field on Wednesday. Thomas Emerich doubled in the first run of the season for the Warriors on their home diamond, scored the second run on a double steal and was part of turning two key double plays with shortstop Ricardo Van Grieken as IHCC earned a 3-1 victory over the Cyclones in the first of the three-game, two-day series between the schools.

"It's an exciting day to have our home opener. It was nice to help the team out a little bit," Emerich said. "We put a lot of work into getting the field ready trying to make sure this game could happen. We got it in."

The teams will return to Pat Daugherty Field on Wednesday for the doubleheader portion of the series that originally was scheduled to be played on Tuesday afternoon. The twinbill featuring a pair of seven-inning contest was pushed back a day with the single nine-inning game between the teams moved to Tuesday to allow for a later start time to help the spring-like conditions continue to dry a field that had been covered in snow less than a week ago.

"It was pretty wet when we got back from our 12-day road trip," Torrez said. "It's been pretty nice this week. We got some wind that helped us out. This is about the normal time of the year for us to get out here and get going."

The Warriors, however, failed to capitalize as an inning-ending double play kept Figueroa from scoring. Emerich would make sure IHCC didn't let a second chance to score go by in the following inning with a double to left-center that brought in Gerardo Villarreal with one out on what proved to be the only hit for either team with a runner in scoring poisition.

"The biggest thing is that, last year we were so experienced and this year we're pretty inexperienced," Torrez said. "We're really trying to learn, so there's a lot going on for a lot of these guys in their minds. We're playing good enough to win games. When we get it all going and we're truly playing up to our capabilities, we're going to have a chance to be a really good baseball team."

Some of the flaws of the Warriors were still on display, from the rally-killing double play in the first to a pair of base runners being thrown out trying to steal third base to end the second and eighth innings. Emerich, however, was able to steal home after advancing to third on an error and scoring as the Cyclones tried initially to throw out Diego Aragon on his steal attempt of second base.

"We were just trying to get some runs across early and give our pitching some help," Emerich said. "It just kind of worked out that was able to get home on that play."

Despite giving up a lead-off home to Brady Linn in the top of the third inning, cutting IHCC's two-run lead in half, Greg Campos gave the Warriors a quality start pitching six innings on Tuesday while allowing just two hits and countering five walks with nine strikeouts. Emerich and Van Grieken teamed up on a key double play later in the third, ending the hopes of the Cyclones to add any runs after Linn's blast, while Campos struck out four batters with a runner on base preventing St. Cloud State from completely erasing the early 2-0 Warrior lead.

"We've got some guys back there on the pitching staff that can do the things we like to do," Torrez said. "They all can throw three pitches for strikes during an at-bat, work inside and out. They all do what we ask. They all do a really good job. We're trying to get better behind them fielding our positions, because we've got 14 or 15 guys that pitch that have very few major college innings. It is a learning process for a lot of guys."

Fuchs would go the distance on the mound for St. Cloud State (3-2), retiring nine IHCC batters in a row at one point until a two-out single by Noah Butler opened the door for a two-out scoring rally as an infield single by Figueroa and a bloop by Vargas that was dropped at short allowed the Warriors to plate their third run of the game. That insurance tally would be big as St. Cloud State would put runners at second in each of the final two innings only for relief pitcher Dane Hensley to retire potential tying runs coaxing a foul out to Emerich by Dylan Haskamp to end the eighth before drawing a hard ground out to short out of Frank Fernandez in the ninth following a double off the fence in center by John Deschamps.

Indian Hills, now 6-4 on the season, will open Wednesday's doubleheader with St. Cloud State at noon. The Warriors also have single nine-inning home games scheduled on Friday with Ellsworth and Saturday with Southwestern, weather permitting on both counts.