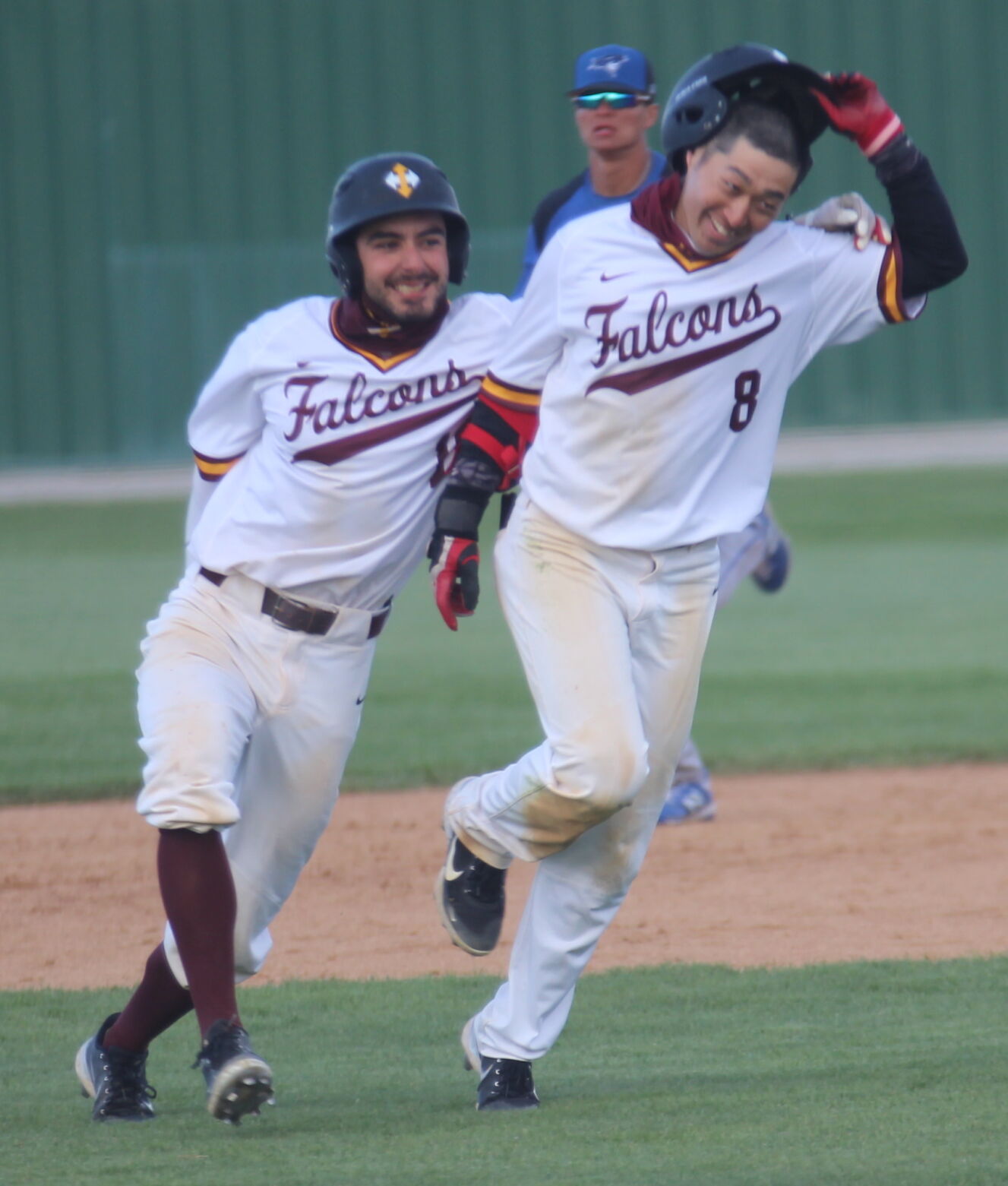 Indian Hills teammates Ricardo Van Grieken (left) and Ren Tachioka (8) celebrate after Tachioka's walk-off RBI single in the bottom of the 11th inning, lifting the Warriors to a 2-1 win in the second game of an Iowa Community College Athletic Conference baseball doubleheader at Pat Daugherty Field in Centerville on Wednesday. 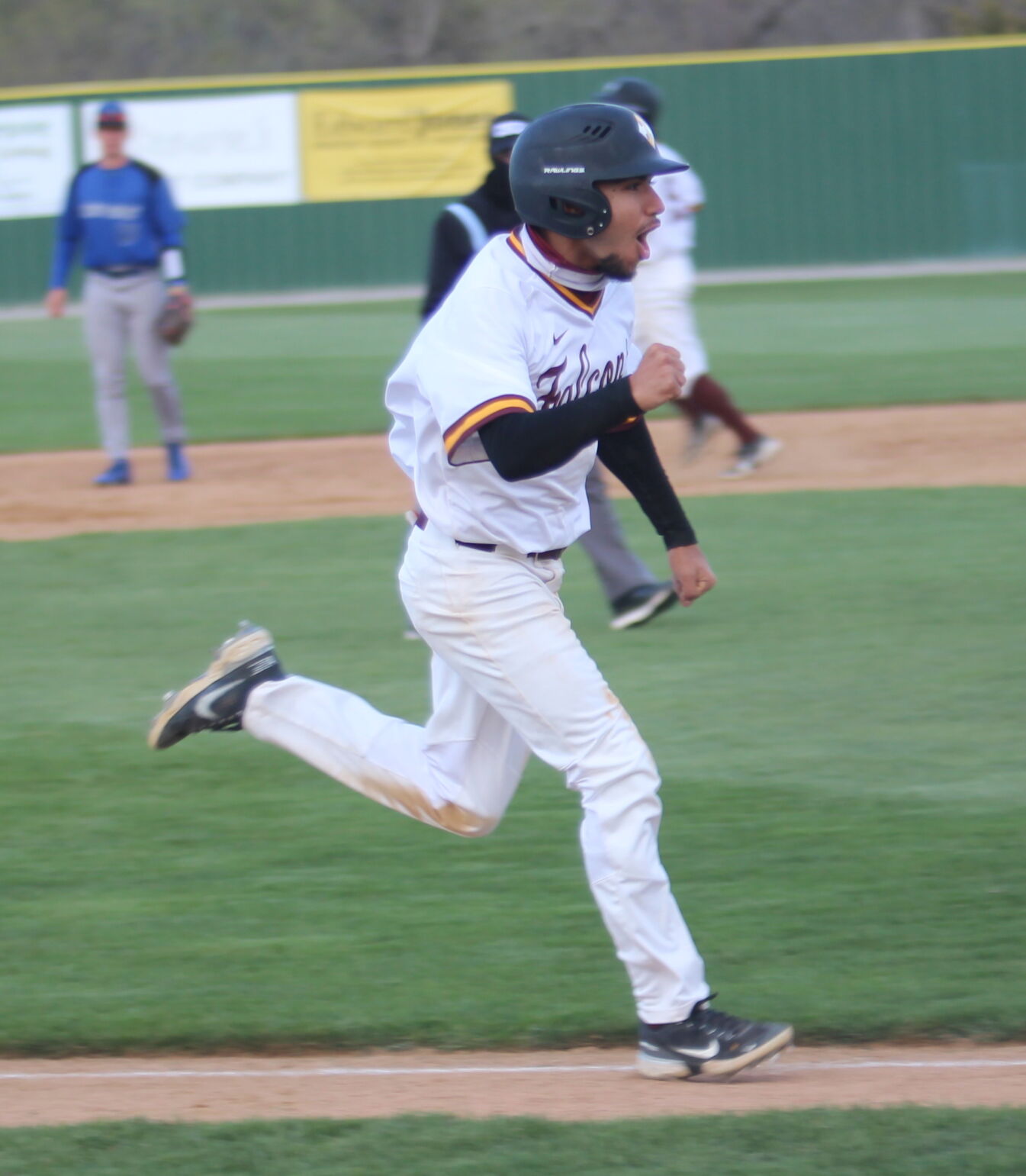 C.J. Castillo heads down the third-base line on his way to scoring his second game-winning run of an Iowa Community College Athletic Conference baseball doubleheader for the Indian Hills Warriors on Wednesday against Iowa Western at Pat Daugherty Field in Centerville.

Indian Hills teammates Ricardo Van Grieken (left) and Ren Tachioka (8) celebrate after Tachioka's walk-off RBI single in the bottom of the 11th inning, lifting the Warriors to a 2-1 win in the second game of an Iowa Community College Athletic Conference baseball doubleheader at Pat Daugherty Field in Centerville on Wednesday.

C.J. Castillo heads down the third-base line on his way to scoring his second game-winning run of an Iowa Community College Athletic Conference baseball doubleheader for the Indian Hills Warriors on Wednesday against Iowa Western at Pat Daugherty Field in Centerville.

CENTERVILLE – C.J. Castillo had been here before.

The Indian Hills freshman infielder was greeted a home plate by his teammates not once, but twice on Wednesday after scoring the game-winning run for the Warriors against seventh-ranked Iowa Western. After sliding into the dish in the bottom of the seventh inning of a 3-2 opening-game win over the Reivers, Castillo was able to pump his fist in the air once more while heading home standing up 11 innings later as Ren Tachioka's one-out RBI single to left clinched a 2-1 extra-inning triumph in game two for IHCC, completing an impressive Iowa Community College Athletic Conference sweep at Pat Daugherty Field.

"It was a big moment for us. We always talk about keeping things simple in the big moments," Castillo said. "The big part about this is we stayed within ourselves.

"In the first game, it was a do-or-die play. Before it even happened, Coach (Matthew) Torrez and I had a plan in place. As soon as I saw the ball in the dirt, I was going."

Indian Hills scored three of their five runs in Wednesday's doubleheader on misplays by the Iowa Western defense, including two runs in the seventh inning of game one that scored on pitches that got away from Reiver catcher Carter Wright. The Warriors were staring a frustrating opening-game loss right in the face after three miscues by the IHCC defense in the fifth allowed Iowa Western to take a 2-1 lead.

"If we play clean defense all day, it might have been a different story, but the guys came back after giving away a couple of runs," Torrez said. "We were tough enough to stay in the game and play all day. We use the word finish. We finished each game and we finished the day."

The Warriors collected one hit through the first six innings of game one, a Shane Morrow first-inning RBI single that brought home Ricardo Van Grieken. Dave Janssen changed that by bunting his way on with one out in the seventh, a small play that led to a big finish for Indian Hills.

"We've really been talking lately about whether or not we're fun to watch," Torrez said. "We've got a lot of little kids out here watching us. Is it fun for them to watch us? That's something we've trying to focus on lately."

Castillo, 0-2 with two strikeouts heading into the seventh inning of game one, coaxed a walk out of Reiver relief pitcher Grant Hubka giving the Warriors a chance to tie the game. Billy Rivera drew a walk of his own, loading the bases ahead of a wild pitch that brought Janssen home with the tying run.

Samuel Fortier reached on an error, loading the bases again with one out. Tachioka, in his first chance to collect a walk-off hit, struck out swinging moving the Reivers within one out of extending the game. Van Grieken stood in drawing a 2-1 count. The fourth pitch of the at-bat rolled away from Wright, bringing Castillo down the line where a throw back to Hubka was dropped at the plate.

"It was definitely a day to make a statement," Castillo said. "Teams see us and think we're small, but we make big-time plays in big-time moments."

Indian Hills (25-4, 20-4 ICCAC) and Iowa Western (30-7, 21-3 ICCAC) were just getting started with high drama on Wednesday. Billy Rivera doubled and scored on an error in the fifth inning of game two, answering a three-hit, two-out rally by the Reivers in the fourth that brought home Logan Jordan on an RBI single by Noah Hull.

The teams remained deadlocked at 1-1 over five straight scoreless innings. The Reivers stranded the potential go-ahead run at second base in the eighth, but had two more base runners thrown out trying to steal second by Janssen in the seventh and ninth.

Indian Hills, meanwhile, could not push the go-ahead run across the plate despite loading the bases in the fifth while leaving runners in scoring position in both the sixth and seventh. Two errors by Iowa Western in the 11th helped set up another one-out, bases-loaded opportunity for Tachioka, who didn't let a second chance slip away driving a pitch into left to clinch the regionals sweep.

"I felt very confident with Ren up there. He always makes contact and he's got great speed," Torrez said. "Ren was hitting ninth in the order for quite awhile this season. He's done a really good job to get himself up to the top of the line-up."

Indian Hills, now just one game behind Iowa Western in the ICCAC standings, heads to Cedar Rapids this weekend for a four-game series at Kirkwood. Action gets underway with Saturday's doubleheader starting at 1 p.m.