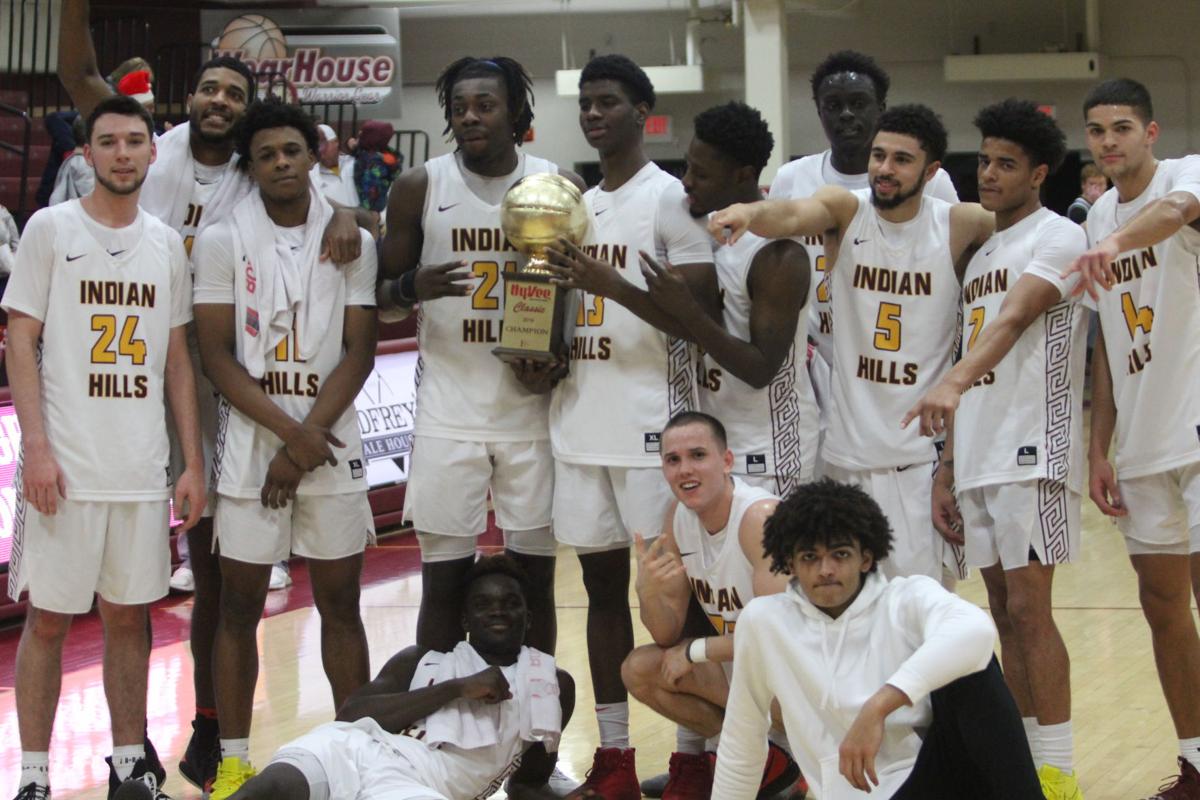 The Indian Hills men’s basketball team celebrates with the first-place trophy after winning the Hy-Vee Classic championship on Saturday, beating Ellsworth 102-57 at the Hellyer Student Life Center in Ottumwa. 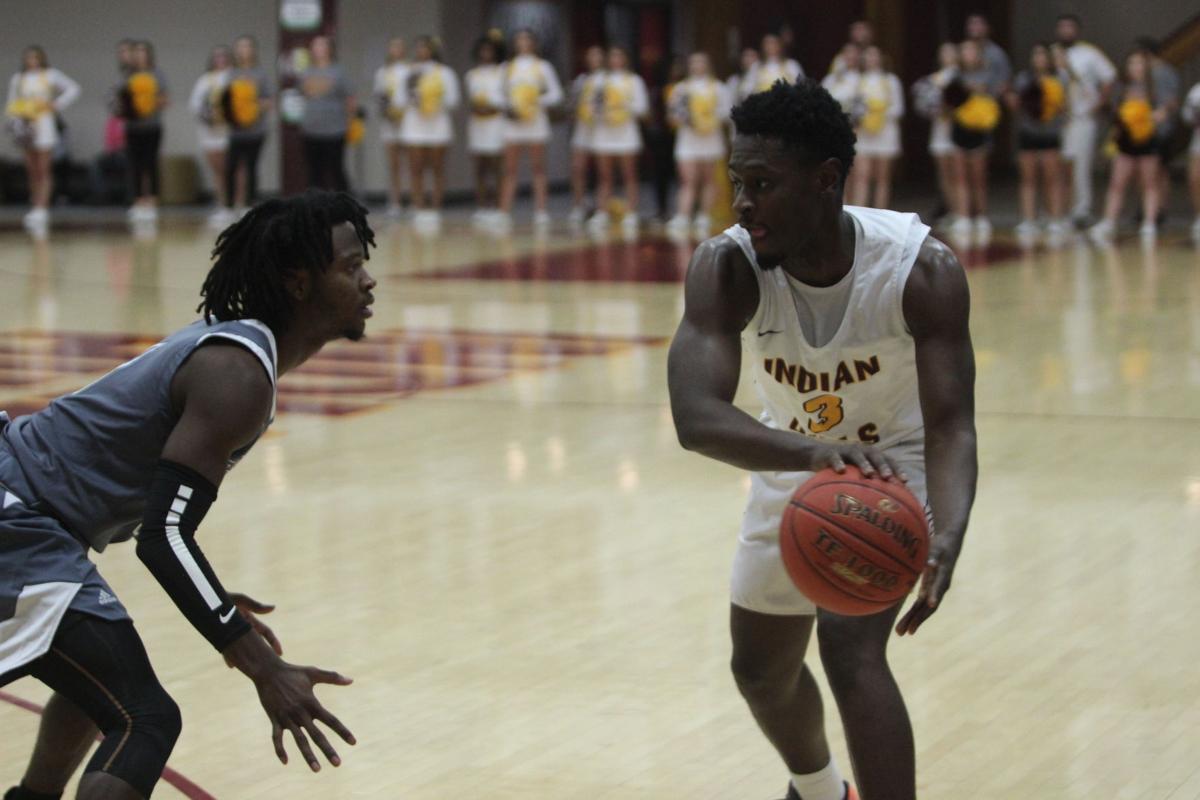 Indian Hills sophomore guard Loseni Kamara (3) looks to make a pass inside against Ellsworth on Saturday night during the championship game of the 2019 Hy-Vee Classic at the Hellyer Student Life Center in Ottumwa.

The Indian Hills men’s basketball team celebrates with the first-place trophy after winning the Hy-Vee Classic championship on Saturday, beating Ellsworth 102-57 at the Hellyer Student Life Center in Ottumwa.

Indian Hills sophomore guard Loseni Kamara (3) looks to make a pass inside against Ellsworth on Saturday night during the championship game of the 2019 Hy-Vee Classic at the Hellyer Student Life Center in Ottumwa.

OTTUMWA – Twas’ the night before Christmas...break for the Indian Hills men’s basketball team.

All through the house, or the Hellyer Student Life Center as it’s more commonly known to visitors, there was plenty of stirring. The ninth-ranked Warriors closed out the first half of the season scoring over 100 points for the second straight night winning the 2019 Hy-Vee Classic with 102-57 win over Ellsworth.

There were no stockings hung in care, but there was a gift waiting for the IHCC basketball team. It wasn’t delivered by Saint Nick, but instead earned through some of the best play of the season by the 2019-20 Warriors, who hoisted the tournament’s championship trophy after shooting 58 percent in the first half (21-36), building a 15-5 lead in the first five minutes and never looking back against the Panthers.

It was a happy holiday crafted over 40 minutes by the Warrior basketball team on a night that had a festive feel, from Christmas sweaters to a halftime teddy bear toss. Players even came back out to do some post game shooting wearing Santa hats and smiles after closing the calendar year on a seven-game winning streak.

“We made shots, got good shots, pushed the pace and our defense remained pretty good,” Indian Hills head men’s basketball coach Hank Plona said. “All in all, it was a pretty good day at the office for us.”

Chris Childs scored 20 of his game-high 23 points in the first half as the Warriors again came out firing early. Childs missed just one of his seven attempts from 3-point territory in the first half, the only shot Childs would miss in the first 20 minutes using the advice of Plona that isn’t quite in the spirit of the holiday season.

“Coach told me before the game that I was being a little too nice to the other teams. He told be not to be so nice,” Childs said. “He wanted me to be aggressive, take the shots I’ve practiced and taken my whole life. He doesn’t want me to turn down a good catch-and-shoot 3. I’ve been a little too indecisive, so I came out with the mindset to take the shots that are open and take the shots my teammates are looking to get me.”

Tyon Grant-Foster and Drake Jeffries each added 14 points for IHCC, Maurice Calloo scored 11 and Samba Kane followed up a career-high 17-point night against Missouri State-West Plains on Friday with 10 points including another late thunderous dunk for the Warriors against Ellsworth.

Indian Hills heads into the holiday break with a record of 13-2 on the season. The Warriors ended the first half of the season on a high note, winning five straight games at home averaging 100.4 points and 54-percent shooting from the field during the most recent home stand.

“We ended the first half the season just like we wanted to. Taking a seven-game winning streak into the break is always a good thing,” Childs said. “We did everything we needed to. I think, as a team, we’re in a good position.

“Everyone wants to do even better in 2020, whether it’s playing better defense or making more shots. We can all work on our games a little bit over the break, get a little rest and come back as an even better unit.”

Josh Donaldson led Ellsworth (8-7) with 18 points in the loss. Anthony Eddy added 14 points for the Panthers in the Saturday night championship game.

Earlier in the day, Missouri State-West Plains secured a split in Ottumwa and a third-place finish in the Hy-Vee Classic with a 102-83 win over Lake Region State. The Grizzlies (7-9) had three players reach 20 points, led by a 23-point effort from Quentin Jones. Alex Peterson added a 22-point, 10-rebound double-double.

Dion Ford led Lake Region State (7-10) with 23 points and 14 rebounds. MSU-West Plains will host No. 9 IHCC in the first games of 2020 as the Warriors will face Arkansas Baptist College on Friday, Jan. 3, at 5 p.m. The Warriors then face the Grizzlies at the West Plains Civic Center on Saturday, Jan. 4, at 7 p.m.