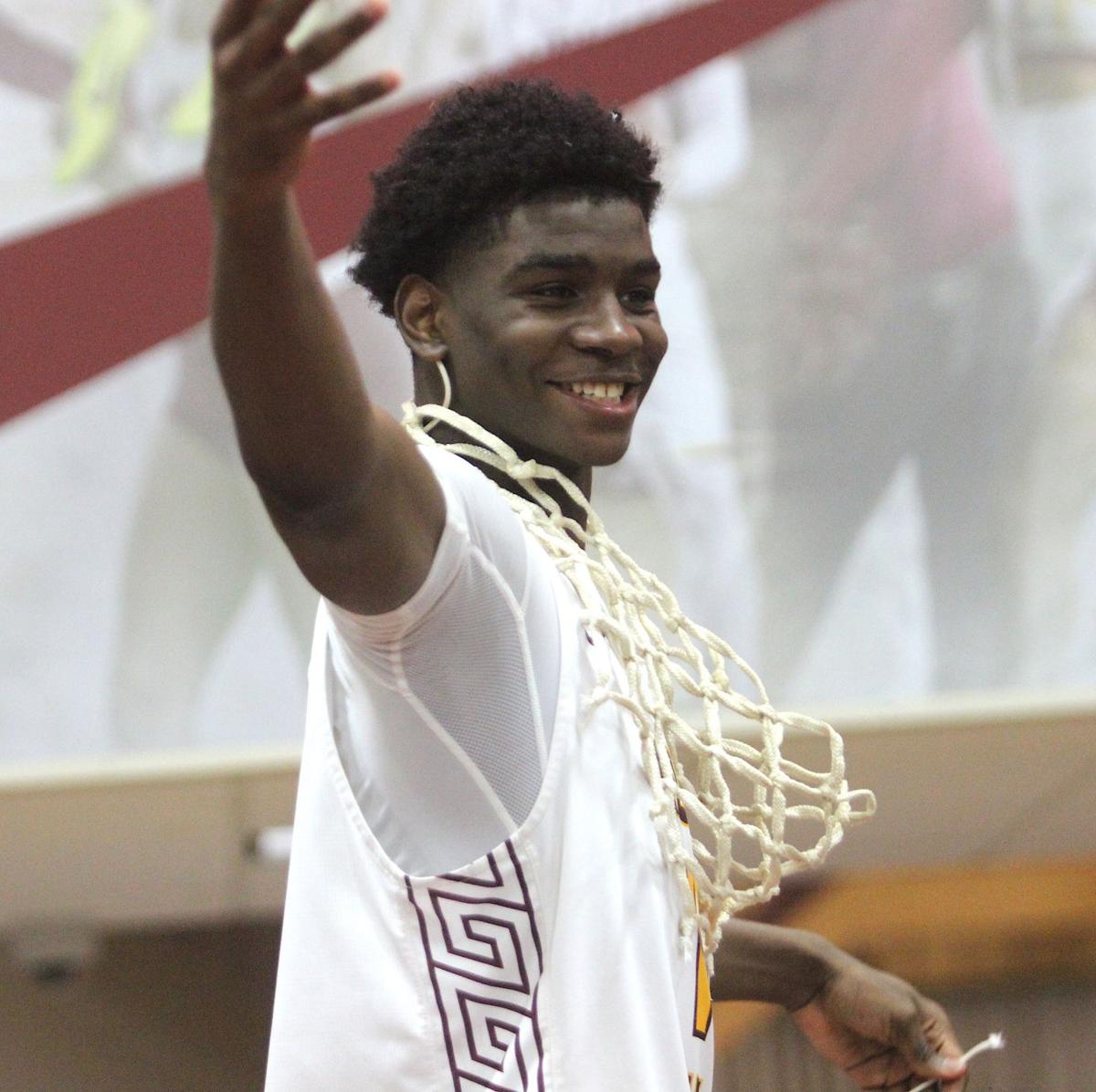 Indian Hills sophomore Tyon Grant-Foster raises his arms over his head in celebration with the net from the basket around his neck after IHCC’s 92-65 North Central District championship win over Dawson Community College on Thursday at the Hellyer Student Life Center in Ottumwa. 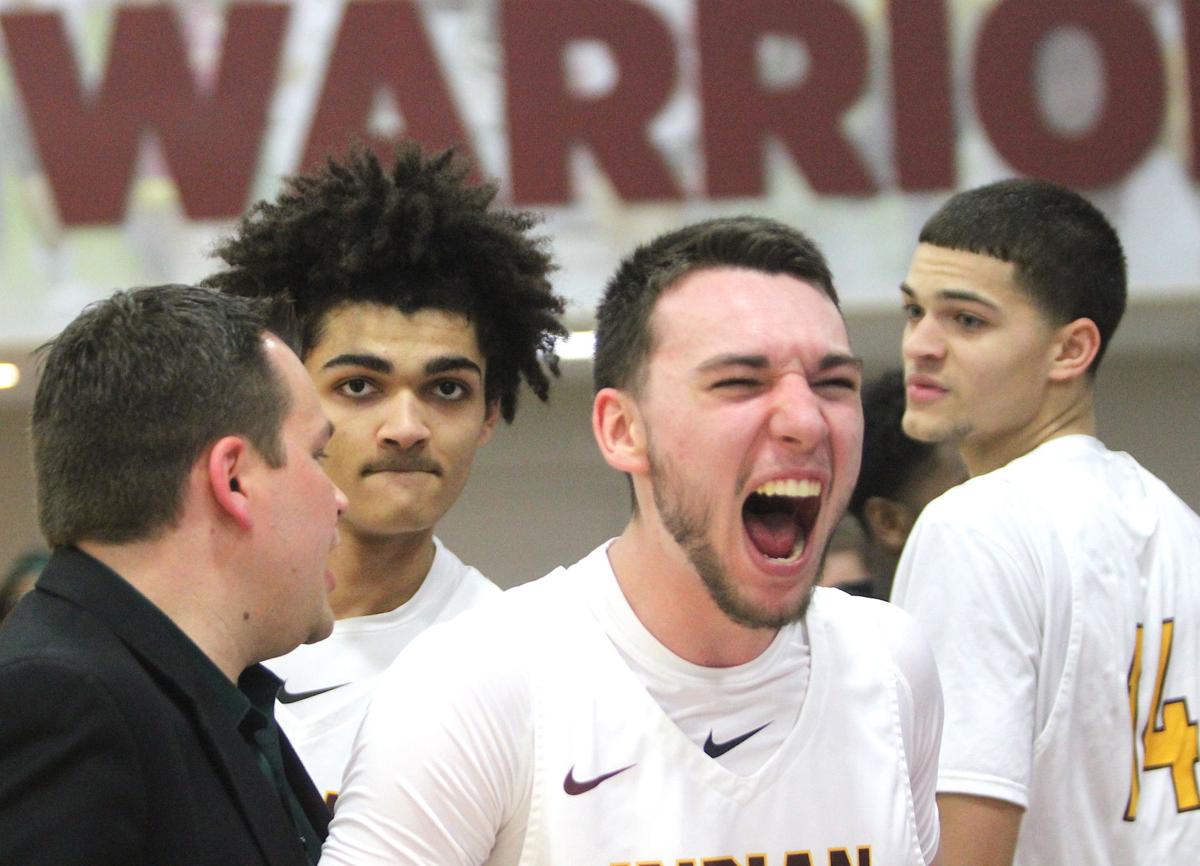 Indian Hills sophomore Tyon Grant-Foster raises his arms over his head in celebration with the net from the basket around his neck after IHCC’s 92-65 North Central District championship win over Dawson Community College on Thursday at the Hellyer Student Life Center in Ottumwa.

OTTUMWA — Tyon Grant-Foster still has the memories of stepping onto the floor at the Hellyer Student Life Center for the first time as a freshman at Indian Hills Community College in 2018.

Two years later, the Kansas City native couldn’t have scripted a better final game on the home floor of the Warriors. Not only did his 37th and final game at the Hellyer Center fall on his 20th birthday, but with it came an opportunity to earn one more chance to play in the NJCAA Division I men’s basketball national tournament.

“It doesn’t get a whole lot better than this,” Grant-Foster said. “Just being out there playing with brothers. The bond that we’ve built is crazy. I love every single one of these guys like they were my blood.”

Grant-Foster made the most of his first birthday spent on the hardwood, leading fourth-ranked IHCC with 29 points in a 92-65 North Central District championship win over Dawson Community College. The future Kansas Jayhawk slammed home a thunderous dunk in the final two minutes, giving the Warriors a 30-point lead, before checking out for the final time and sharing one final hug with Indian Hills head coach Hank Plona.

“He’s one of my favorite players that I’ve ever coached,” Plona said of Grant-Foster. Tyon and I are similar in a lot of ways in terms of what we want and how competitive we are. Because of that, we’ve kind of pushed each other and tried so hard to accomplish something together. We were not able to win the district last year, so to get it this year for both Tyon and JD (Muila), it’s been a great two-year journey so far that we’re hoping we can extend a little more.”

Moments after checking out of his final game at the Hellyer Center, Grant-Foster hoisted a trophy over his head, headed up a ladder and made the final snips to cut down the net on the west-side hoop at the Hellyer Center. The perfect birthday gift for IHCC’s top scorer was a net around his neck with arms hoisted high above his head, similar to the 2019 “Meet The Warriors” event in which Grant-Foster opened the season with arms outstretched celebrating with Warrior men’s basketball fans.

“It was exactly the same feeling. I loved that feeling,” Grant-Foster said. “It’s really a touching feeling being here for two years and finally coming to final game in this gym with something like a trip to Hutch on the line. It’s really crazy. I didn’t know it was going to happen on my birthday, but God has a plan for everything.”

The plan for the Warriors going into the night was to have the same look on their faces in both the pregame and postgame. In a game with so much at stake, Indian Hills ran onto the home court for the final time this season with a long line of fans waiting to high-five the Warrior players minutes before tipoff.

As the final seconds on the pregame clock wound down, Indian Hills players were smiling and laughing. The attitude seemed to carry over to the game as the Warriors were more than happy to match Dawson’s up-tempo pace, allowing IHCC to build an early lead and never look back.

“Coach Hank asked us after the Southeastern game (a 72-58 regional championship win over the Blackhawks on Saturday) what was the biggest thing we needed to do in that game? We were taking it so seriously, but Coach Hank told us the biggest key was to go out there and have fun,” IHCC sophomore Malique Jacobs said. “We’ve been having fun all year. Every game is important to us. We play every game like it’s a championship game.”

The Warriors went with the flow with a national tournament berth on the line, finishing Thursday’s district final shooting over 55 percent in the first half making 20 of 36 field goals on the way to building a 57-37 halftime lead. Indian Hills came within one made field goal of shooting over 50 percent for the game, finishing 35-71 from the field (49.3 percent) with 15 made 3-pointers.

Dawson, a team that averages over 91 points a game, saw a 17-game winning streak end as the Buccaneers struggled with the length of the Warriors. The Montana school finishing with just nine made field goals in the second half, helping IHCC not only maintain but steadily grow their 20-point halftime edge.

“It all starts with our confidence. It’s incredibly high right now,” Jacobs said. “The biggest difference in our team is that we trust each other. When we lost our first two games in Florida (back in November), we didn’t have the same level of trust that we share right now.”

Thursday’s win was another example of different players stepping up at different times for the Warriors. While Grant-Foster finished with 29 points, IHCC had four players reach double figures with Jacobs scoring 14, Chris Payton powering home 11 including an emphatic dunk of his own that served as the final field goal scored at Hellyer this season and Drake Jeffries scoring 10 including an early 3-pointer that quickly erased the 3-2 edge that would prove to be Dawson’s only lead.

“Chris Childs is one of the best shooters I’ve ever played with, so when you see him open, you have to get him the ball, but Drake can make some big shots,” Jacobs said. “Tyon knows every scouting report is going to have his name on it and all eyes on him, so when he drives and kicks the ball, it makes the defense scramble back. We’ve got guys all over the court that can make you pay for not covering them.”

Indian Hills is not locked into the national tournament with Thursday’s win, but is likely to receive a very high seed. With No. 1 Florida SouthWestern and No. 3 Ranger failing to win district titles, the Warriors may roll into the Hutchinson as a favorite to win the national title. IHCC players, coaches and fans can find on Monday at the Hellyer Center at noon exactly what the road looks like for the Warriors in the 2020 national tournament.

“It’s wide open. There’s a lot of good teams and everyone knows what they’re doing to make it this far in the season,” Plona said. “Someone said once that you could play a national tournament 10 times and get 10 different winners. Maybe eight or nine. There’s a lot of teams that have great game plans and know what to do, but I wouldn’t trade our roster for anyone’s. We’ll enjoy this over the weekend, find out where we stand Monday and get right back to work.”