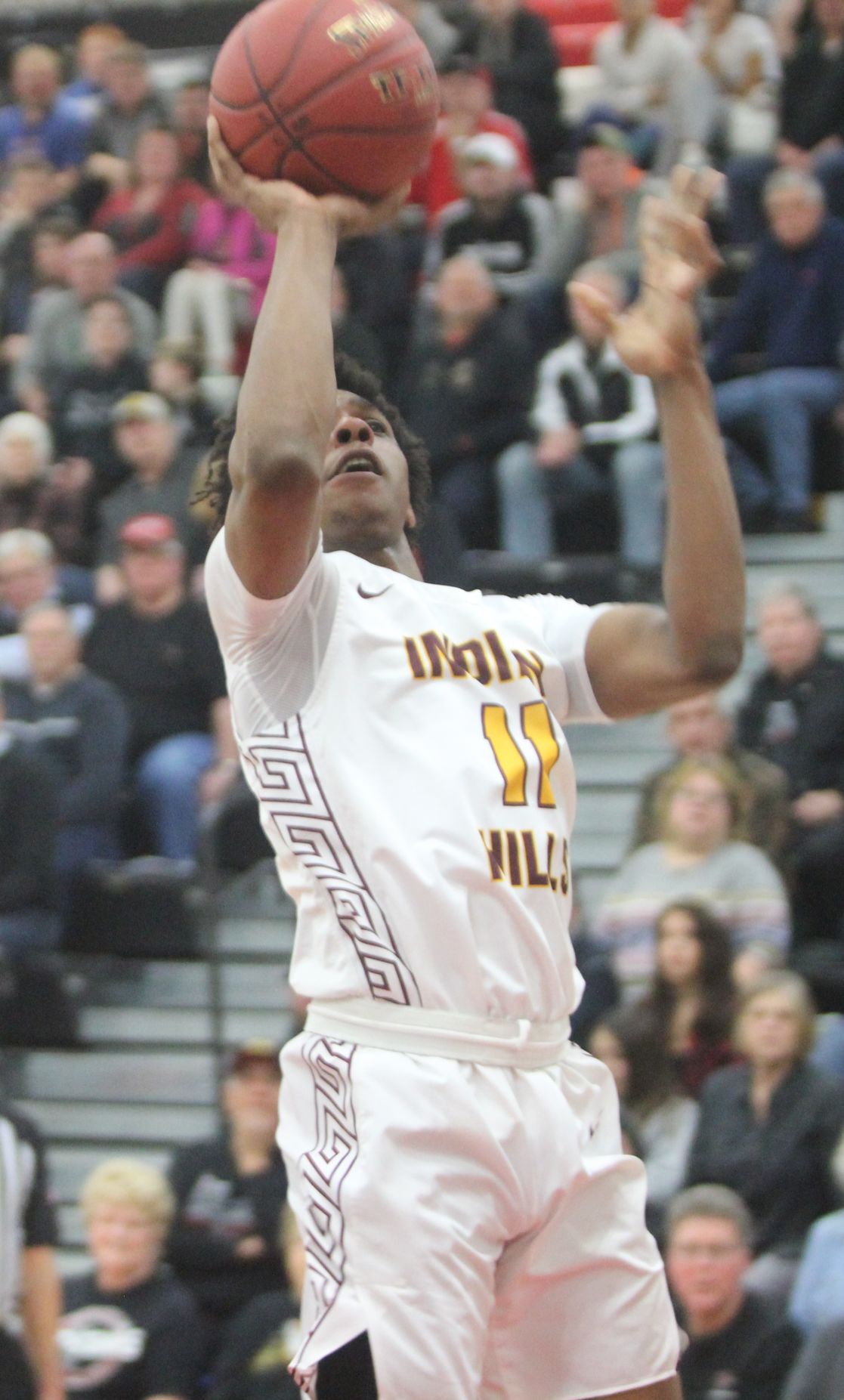 Indian Hills sophomore Malique Jacobs raises up for a shot late in the second half of IHCC’s 73-69 Iowa Community College Athletic Conference loss to Southeastern on Wednesday night at Loren Walker Arena in West Burlington. 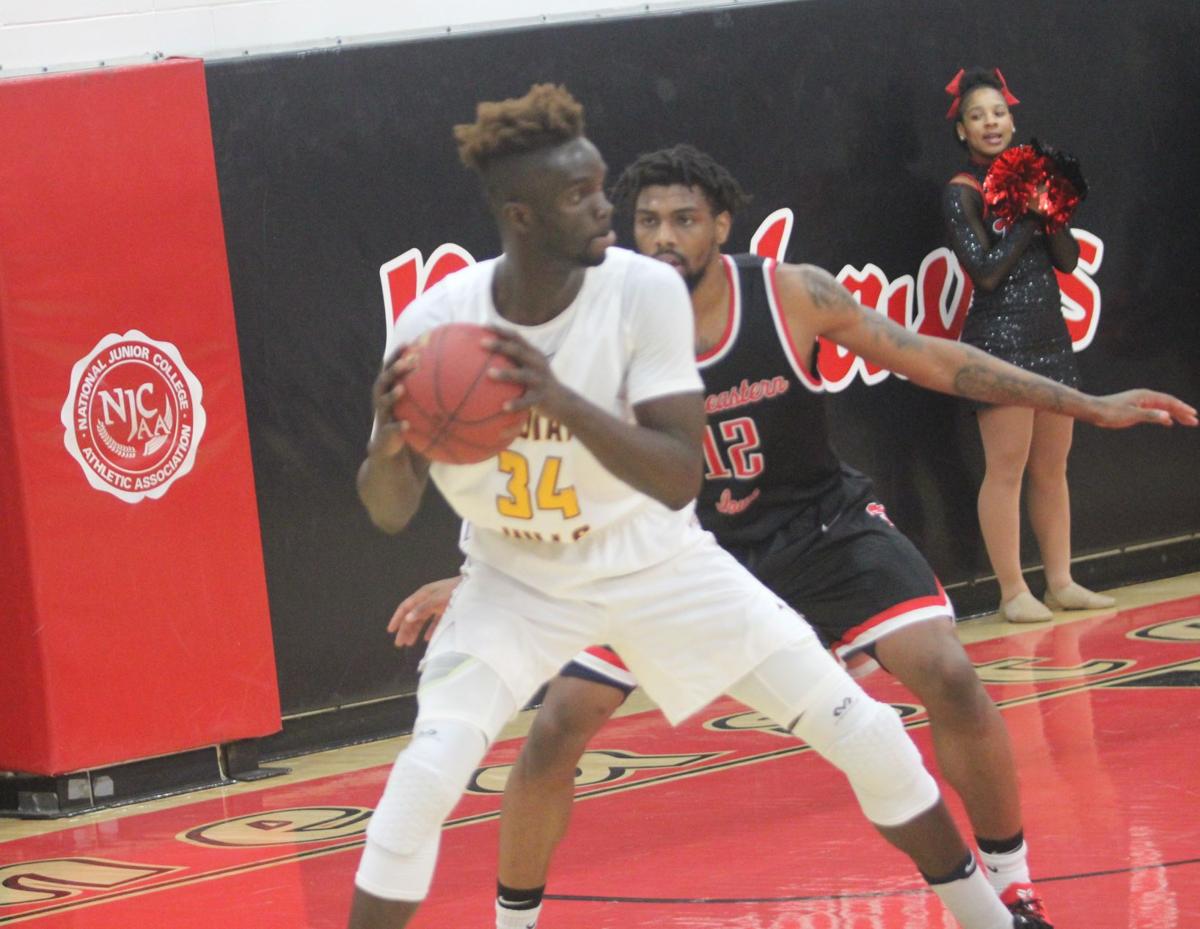 Indian Hills sophomore Malique Jacobs raises up for a shot late in the second half of IHCC’s 73-69 Iowa Community College Athletic Conference loss to Southeastern on Wednesday night at Loren Walker Arena in West Burlington.

“Actually, we owe them two.”

Make it three after Wednesday night. Camryn Weston sank four straight free throws in the final minute to put away a 73-69 win for the 22nd-ranked Blackhawks in an Iowa Community College Athletic Conference thriller at Loren Walker Arena. Southeastern made six straight free throws after Grant-Foster’s bid for a game-tying 3-pointer bounced off the back of the rim with 25.1 seconds left.

“Coaches told us at halftime to keep our composure. It’s still a 40-minute game,” Southeastern sophomore Diew Moses said. “We put in ourselves in a good situation coming out of halftime. We kept attacking the basket. It feels good to have this fan base supporting to us. Every time we made a play, you could hear the crowd getting louder and louder. They were a big part of this win.”

The win leaves Southeastern alone atop the Region XI standings as the first team to get to 2-0 this season in ICCAC play. The Blackhawks have won the last three against the Warriors, including the last two games played in West Burlington and last year’s regional championship game played in Ottumwa.

“I love Indian Hills and the team they have. They’re long, athletic and have guys that can shoot it,” Southeastern head men’s basketball coach Lorenzo Watkins said. “I told the guys I’ve been doing this a long time. I knew that if we didn’t come out in those first few minutes of the second half and show some resiliency, we were going to be down double digits really fast.

The loss snaps IHCC’s 11-game winning streak, leaving the Warriors with an 0-1 start to regional play. Indian Hills had momentum going into the locker room on Wednesday night, using a quick 11-3 spurt to build a nine-point lead and entered the second half leading 34-27 against the Blackhawks.

That lead was gone in less than three minutes. Elias Ezenekwe buried consecutive 3-pointers following a triple from Moses on the opening possession of the second half. Aaris Bonds tipped home a missed shot on Southeastern’s fifth possession of the half, giving the Blackhawks a sudden 40-36 lead.

“In these type of games, you can lose momentum really fast,” Watkins said. “It’s hard to fight back and sustain runs, especially the ones that Indian Hills put on us. I give our guys a lot of credit. We came out, got two or three stops and suddenly we’re up by four.”

“The first few minutes of the second half were definitely an issue,” Indian Hills head coach Hank Plona said. “Our focus, our defensive energy and our attention to detail was not there when we came out of the gate for the second half. That should never happen in this environment.”

Tyon Grant-Foster led all scorers with 24 points, including six straight in a two-minute span as Indian Hills caught Southeastern at 58-58. The Blackhawks responded on the next possession, taking the lead for good with four minutes to go on a tiebreaking 3-pointer by Carlos Lemus, Jr.

Grant-Foster scored four more points in the final four minutes, including a huge 3-pointer with 1:05 left that brought Indian Hills within 67-64. After Boubacar Kamissoko missed a lay-up for Southeastern, Grant-Foster grabbed his team-leading seventh rebound and brought the ball back down the floor with sights set on a tying 3-pointer. Instead, the future Kansas Jayhawk was caught out of rhythm and was slightly off balance on his shot that would have evened the score.

While Southeastern (17-4, 2-0 ICCAC) is off this weekend, Indian Hills (17-3, 0-1 ICCAC) will look to bounce back at home. Weather permitting, the Warriors are scheduled to host Iowa Western Saturday night at 7 p.m.

OTTUMWA [mdash]Phillip Dirk Peck, 61, of Ottumwa, died April 9, 2020 of a heart attack at his home. He was born August 20, 1958 in Ottumwa to Max Edward and Mary Lou McCoy Peck. A graduate of Ottumwa High School in 1977, he worked as a truck driver for Alexander Trucking and Norris Asphalt, …