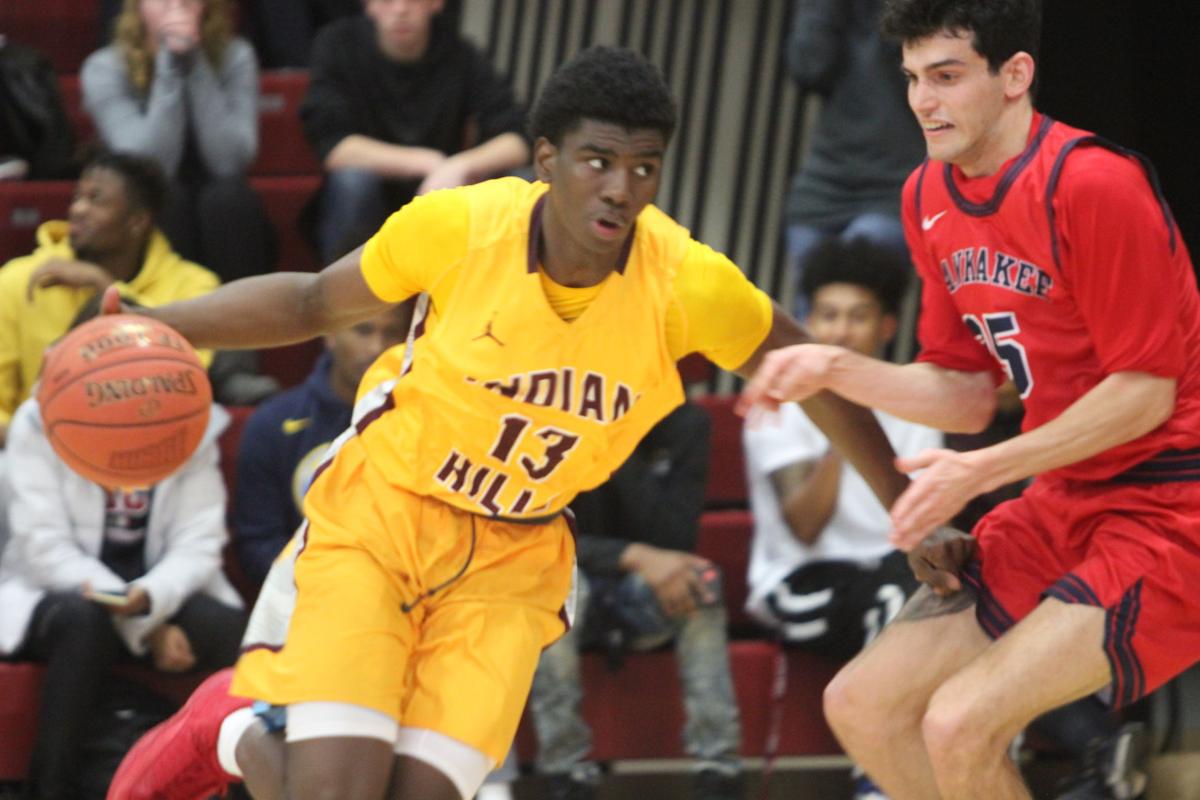 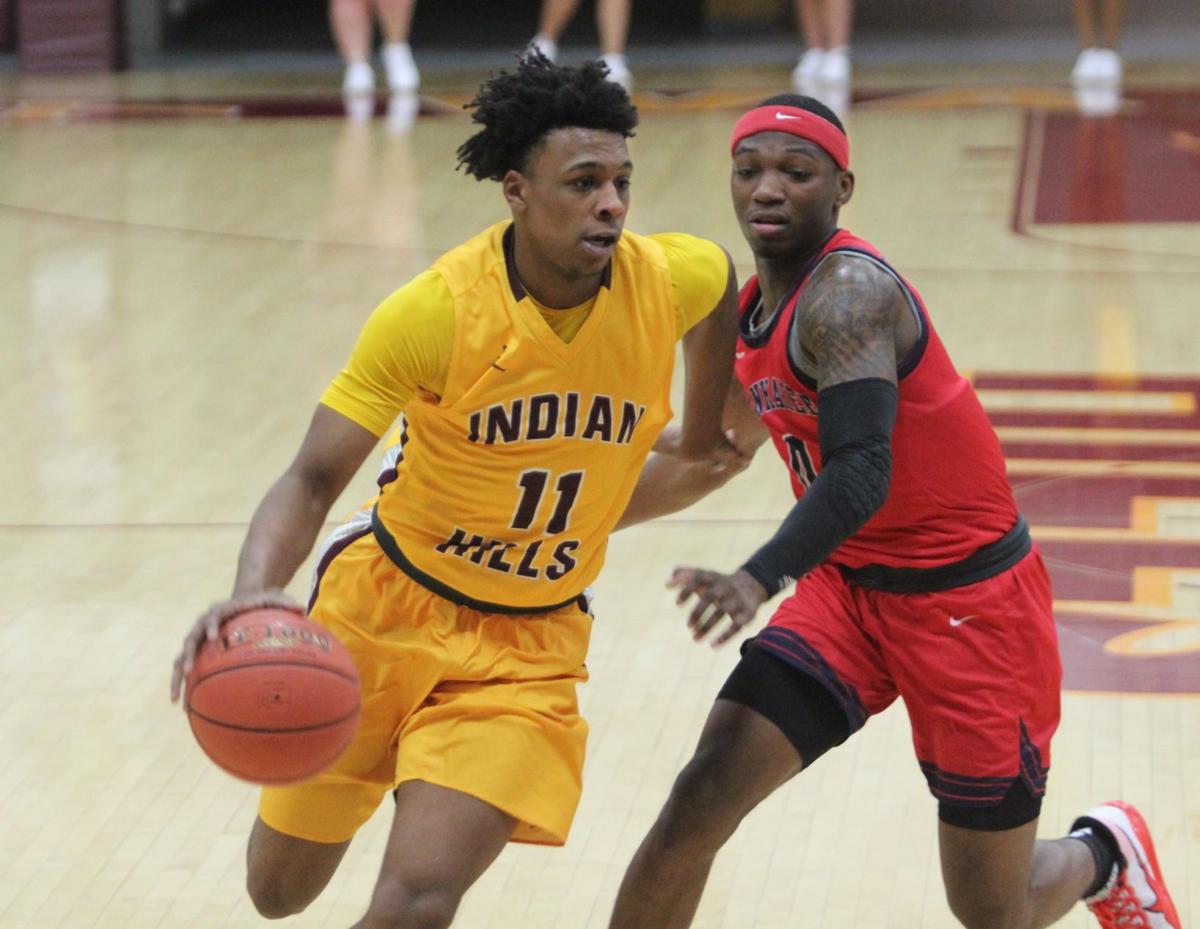 Indian Hills sophomore Malique Jacobs (13) brings the basketball up the court while being guarded by Kankakee sophomore Vashawn Sims (0) this past Saturday night during junior college men's basketball action at the Hellyer Student Life Center in Ottumwa. 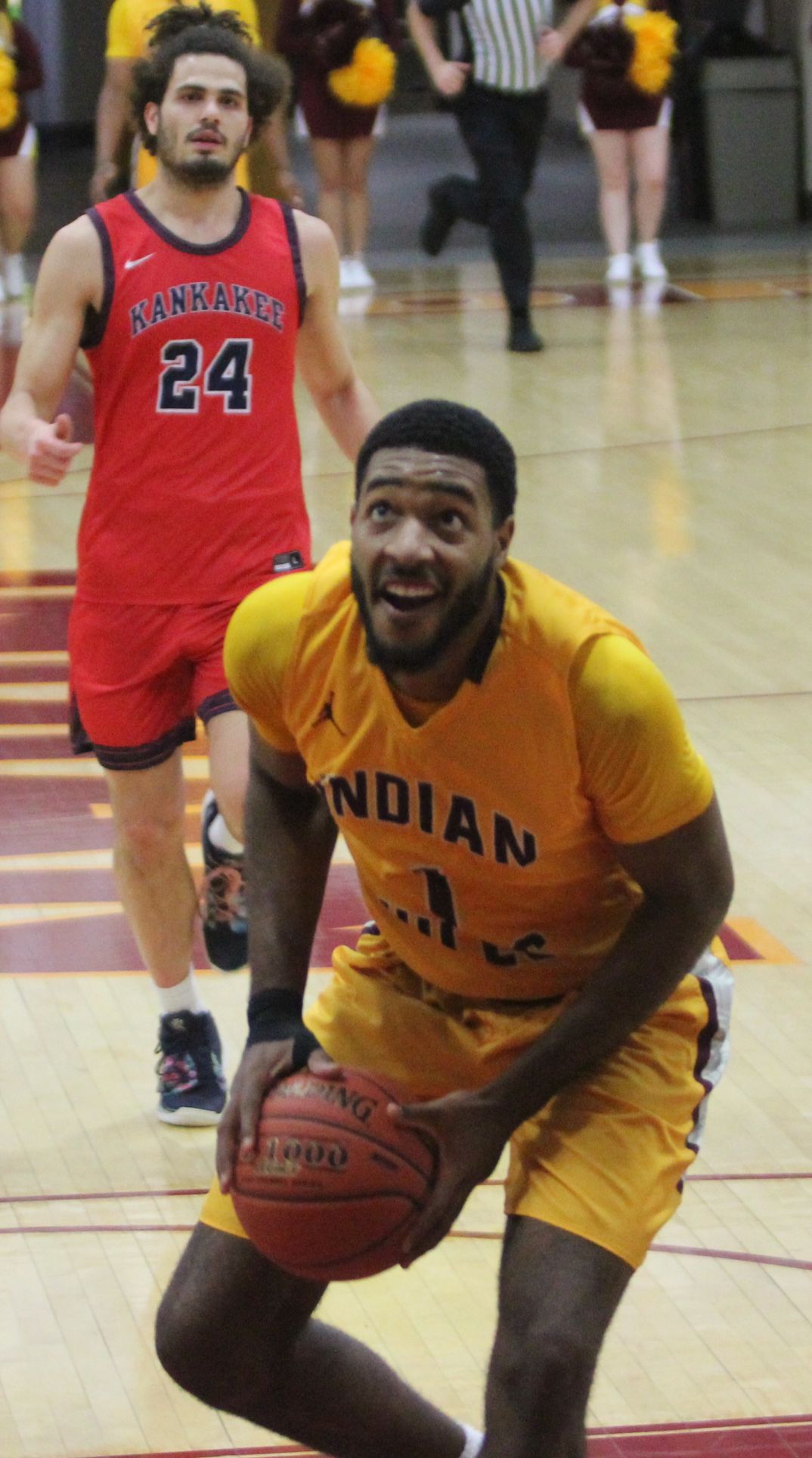 Indian Hills sophomore Maurice Calloo (1) prepares to go up for a slam dunk on Saturday night during junior college men’s basketball action against Kankakee in front of freshman Bar Shefa (24) at the Hellyer Student Life Center in Ottumwa.

Indian Hills sophomore Malique Jacobs (13) brings the basketball up the court while being guarded by Kankakee sophomore Vashawn Sims (0) this past Saturday night during junior college men's basketball action at the Hellyer Student Life Center in Ottumwa.

Indian Hills sophomore Maurice Calloo (1) prepares to go up for a slam dunk on Saturday night during junior college men’s basketball action against Kankakee in front of freshman Bar Shefa (24) at the Hellyer Student Life Center in Ottumwa.

OTTUMWA – When Saturday began, the status of the one more game for the Indian Hills Warriors prior to opening regional play was very much in question.

When Saturday came to an end, there was no doubt about it. The sixth-ranked Warriors are as ready as possible to once again track down a Iowa Community College Athletic Conference title.

Kankakee braved the winter weather on Saturday, making the five hour trip from Illinois to the Hellyer Student Life Center in Ottumwa. Sixth-ranked Indian Hills sent the Cavaliers home with a loss, winning 83-55 in the final tune-up before heading to Southeastern on Wednesday to open ICCAC Region XI play against the 25th-ranked Blackhawks.

“There were a lot of positives to be taken from this,” Indian Hills head men’s basketball coach Hank Plona said. “The guys are getting comfortable on offense. We defended the ball really well. I think we’re making progress in the right direction. I think we’ve done a good job picking right back up where we left off during in this two-week stretch we’ve had getting back from the holiday break.”

Tyon Grant-Foster rebounded from a tough scoring night 24 hours earlier against John Wood, leading IHCC with 21 points and seven rebounds on Saturday. John Wood limited Grant-Foster, the leading scorer for the Warriors with 16.6 points a game, to just six points on Friday.

“Coach Hank and I talked about it. He thought I was being a little bit too passive at moments,” Grant-Foster said. “He wanted to be more aggressive, but not aggressive in the wrong situations.”

Maurice Calloo added 20 points, hitting his first seven shots from the field on the way to setting a new career high while reaching double figures for the fourth straight game. Calloo showed his versatility from the floor, hitting four of five shots from 3-point range while also taking the ball inside on a fast-break dunk following a steal and assist from Malique Jacobs during a 16-0 first-half run that put the Warriors on top 31-14.

“It all starts off with shoot around and during practice for us,” Calloo said. “The preparation we put into things during the week as a team and as a unit gives us the confidence to come out with a win.”

Chris Childs added 13 points for the Warriors (17-2). Chris Payton reached double figures for the first time since returning from mononucleosis, hitting all six shots from the field while scoring 12 points.

“It’s good to get both Chris and Samba Kane back on the court. They’re going to be huge for us going into conference play,” Plona said. “We have a lot of different guys we can go to. Guys are getting comfortable out there on the court with what their jobs are. They’re focusing on doing what it takes to help us succeed. I like where we’re at as a group.”

It hasn’t been easy coming out of the holiday break for IHCC to continue playing at the same high level the Warriors played at in December. Injuries and illness have sidelined four different players, including freshman Tyrese Nickelson who missed both games on Friday and Saturday with tendinitis in his knee. Dedoch Chan and J.D. Muila have been spectators to all four Warrior wins this month after both sustained injuries over the holiday break.

“It’s been pretty hard. There are times out there on the court when we’ve got five guards at moments. We’re all on the perimeter, so that hurts our ability to rebound the ball,” Grant-Foster said. “Right now, everyone is adjusting. I’m playing more of the 4 and the 5 like I did last year, but it’s harder. I have to learn the new plays on the fly.”

Stepping up for the Warriors on Saturday, Jacobs and Loseni Kamara both produced excellent floor games. Kamara led IHCC with nine assists while Jacobs scored six points, dished out seven assists and hauled in six rebounds to keep the Warriors in front by a comfortable margin most of the night.

“Malique is playing unbelievable right now. We know how well he can play and he can make us unstoppable,” Grant-Foster said. “We had four players reach double figures. The offense is right there. Once we get J.D. back, our defense is going to be at another level too. We can be unstoppable at both ends of the court.”

Damari Nixon led Kankakee (10-8) with 16 points on Saturday. Michael Moshkovitz added 11 points before fouling out for the Cavaliers.

While Indian Hills won in non-conference action on Saturday. Southeastern (15-4) secured a 65-42 win to open ICCAC play against Marshalltown. Also on Saturday, Northeast started 1-0 in Region XI with an 89-83 victory over Iowa Western.