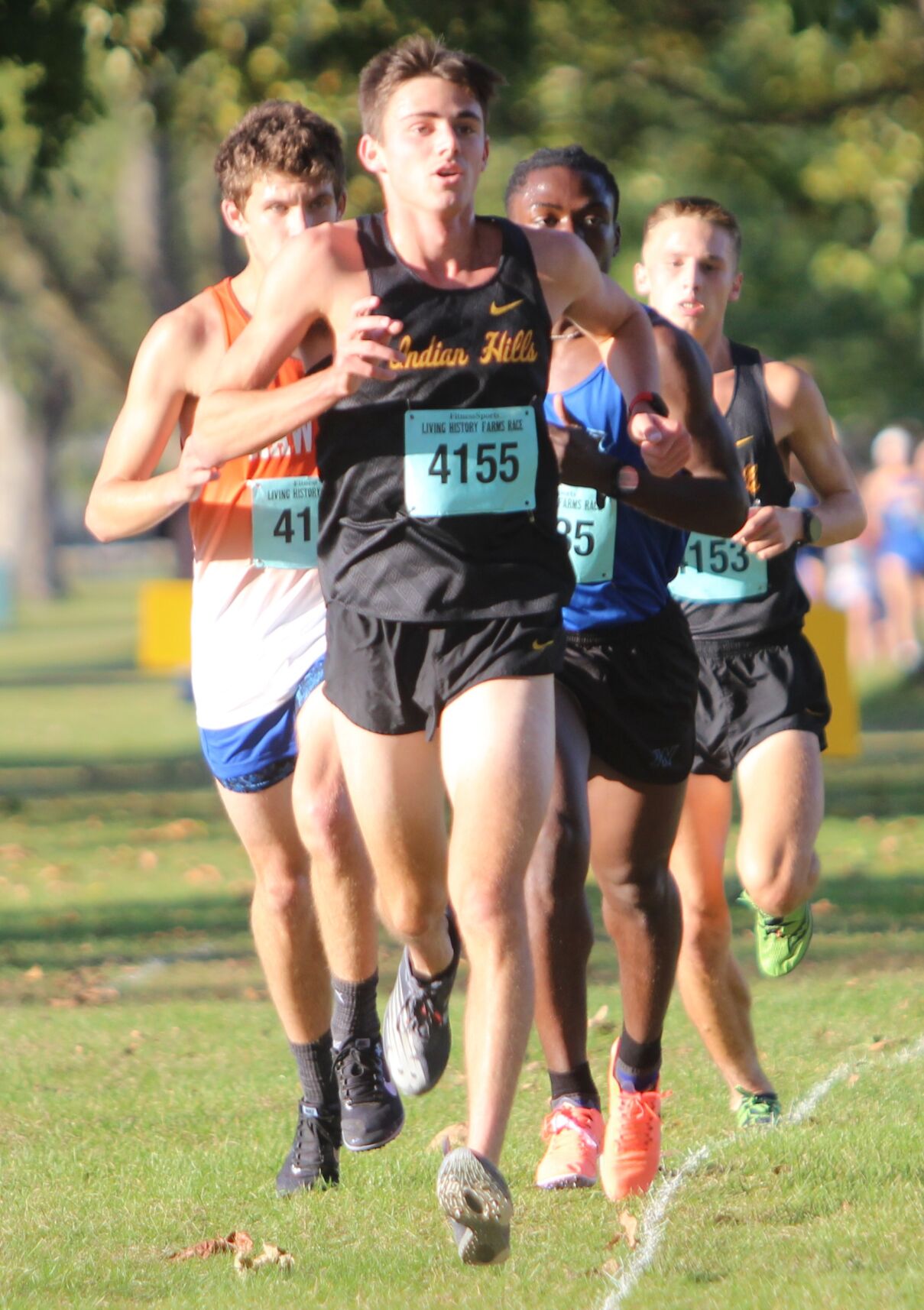 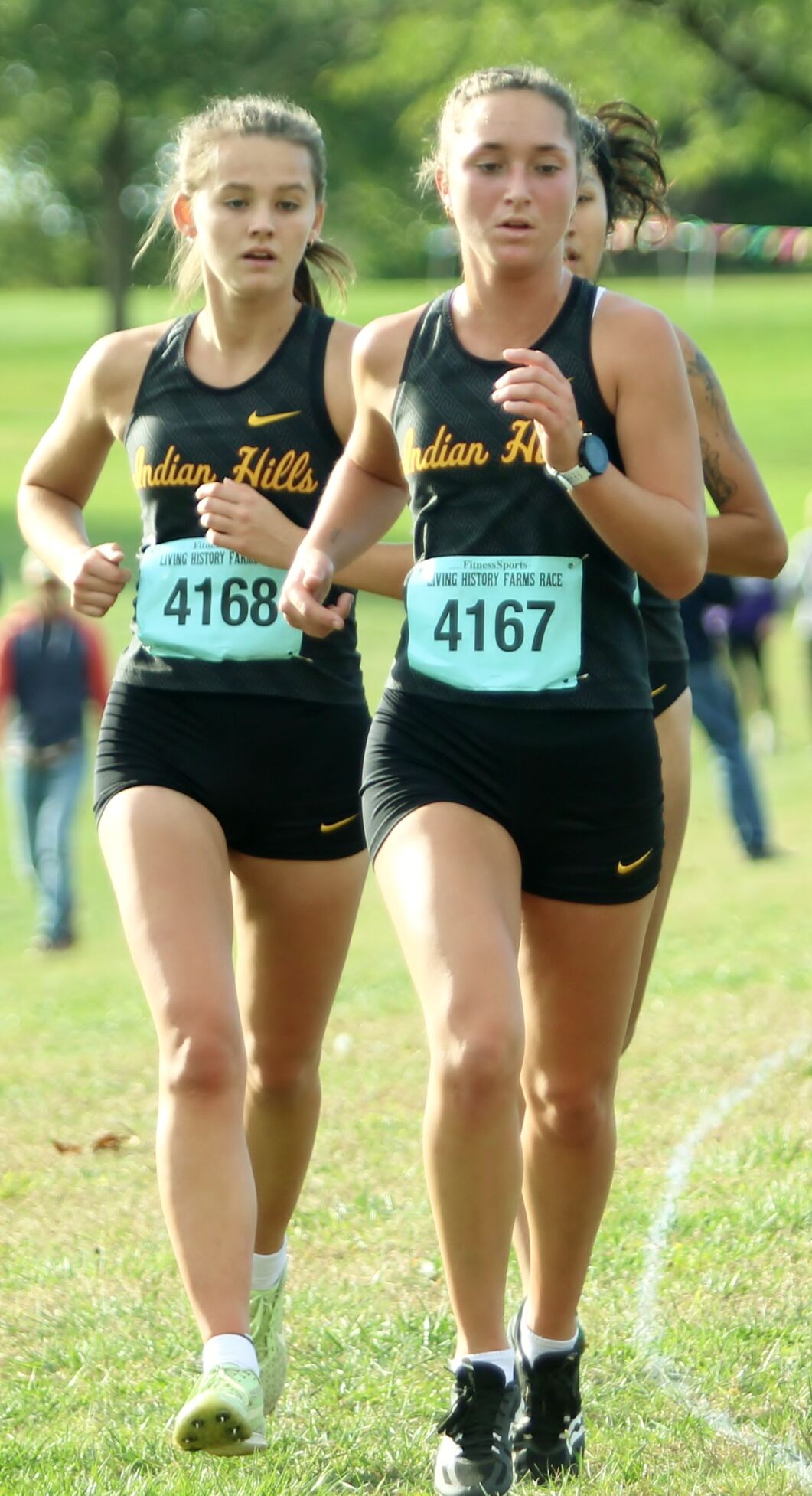 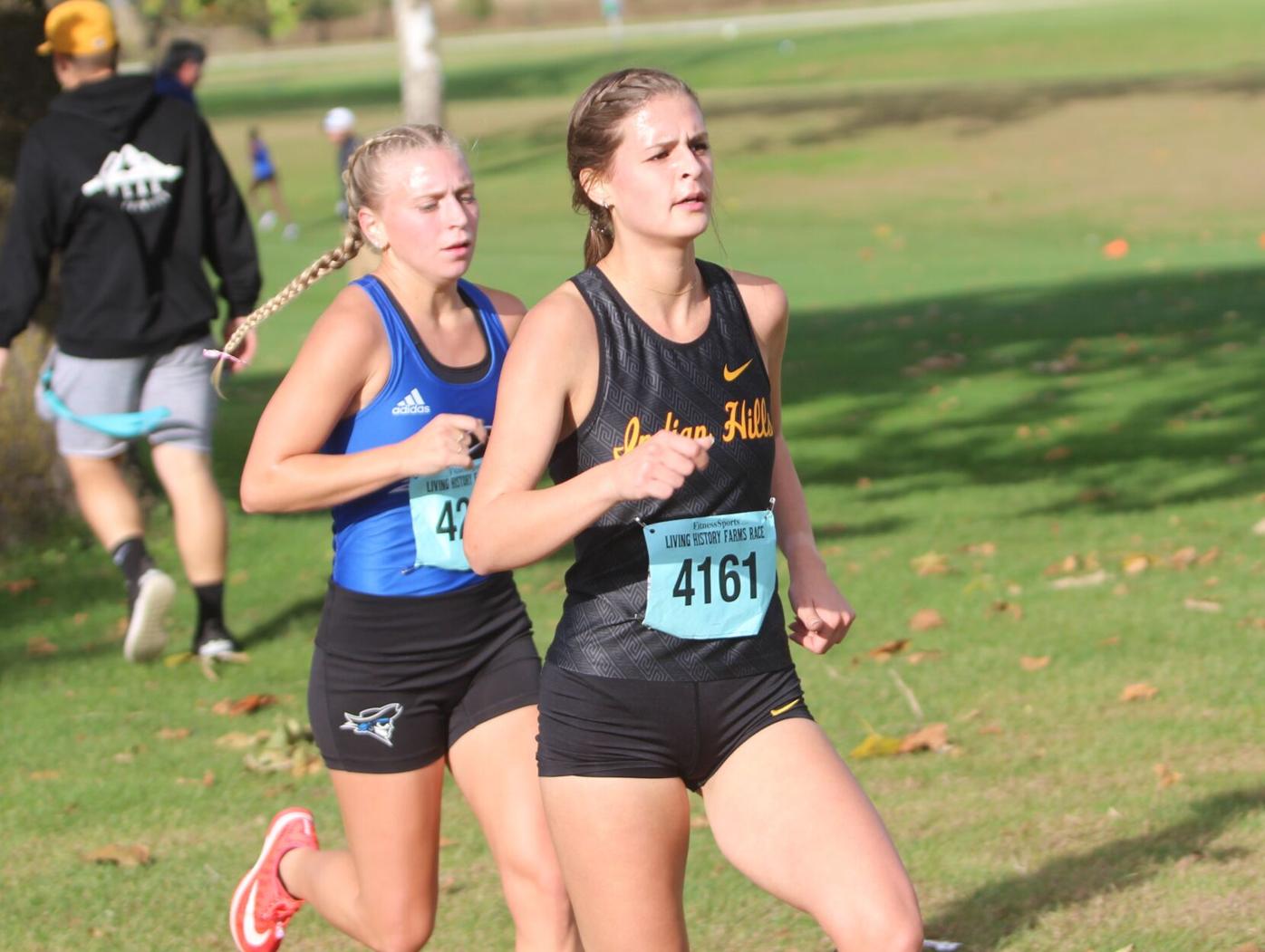 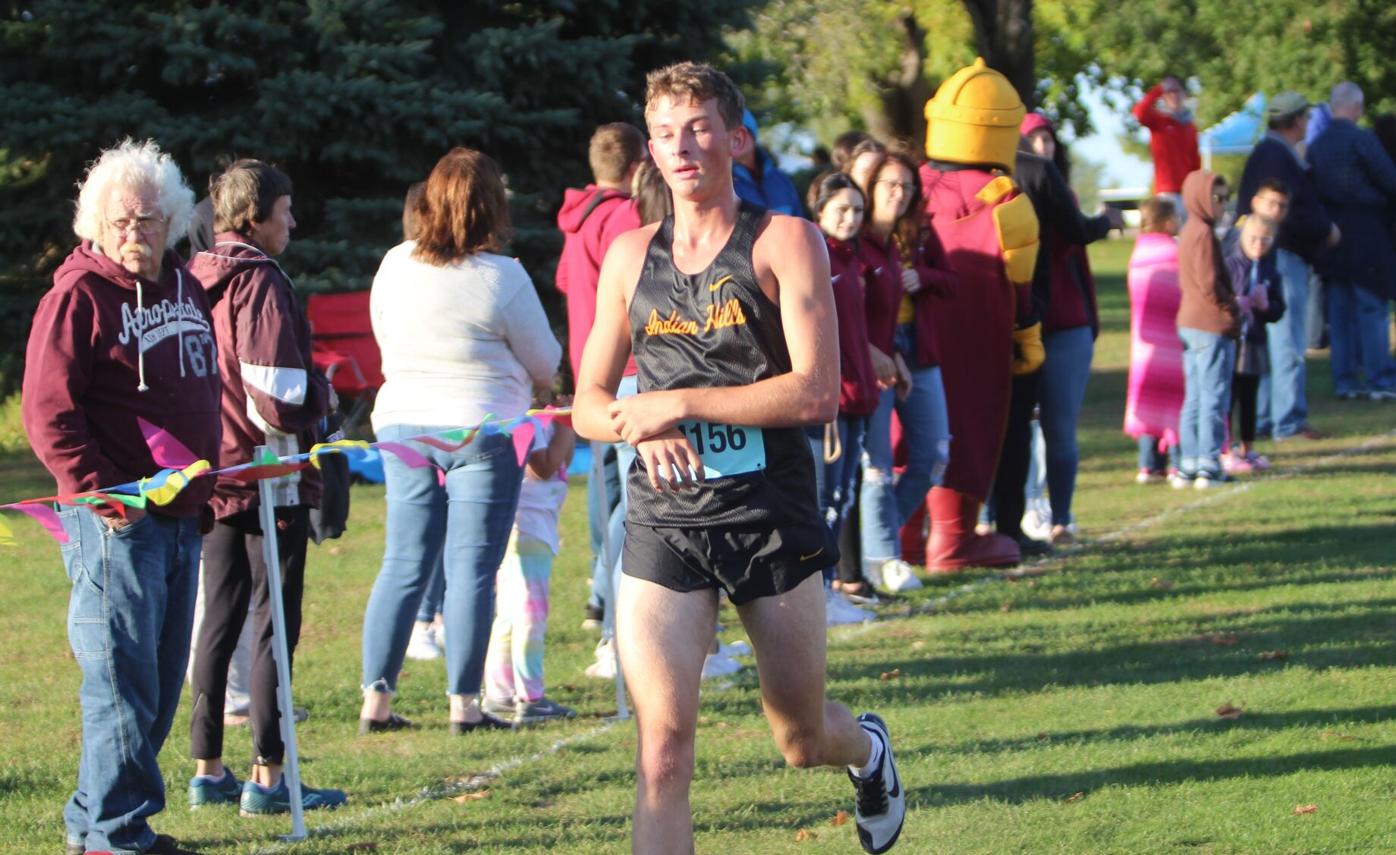 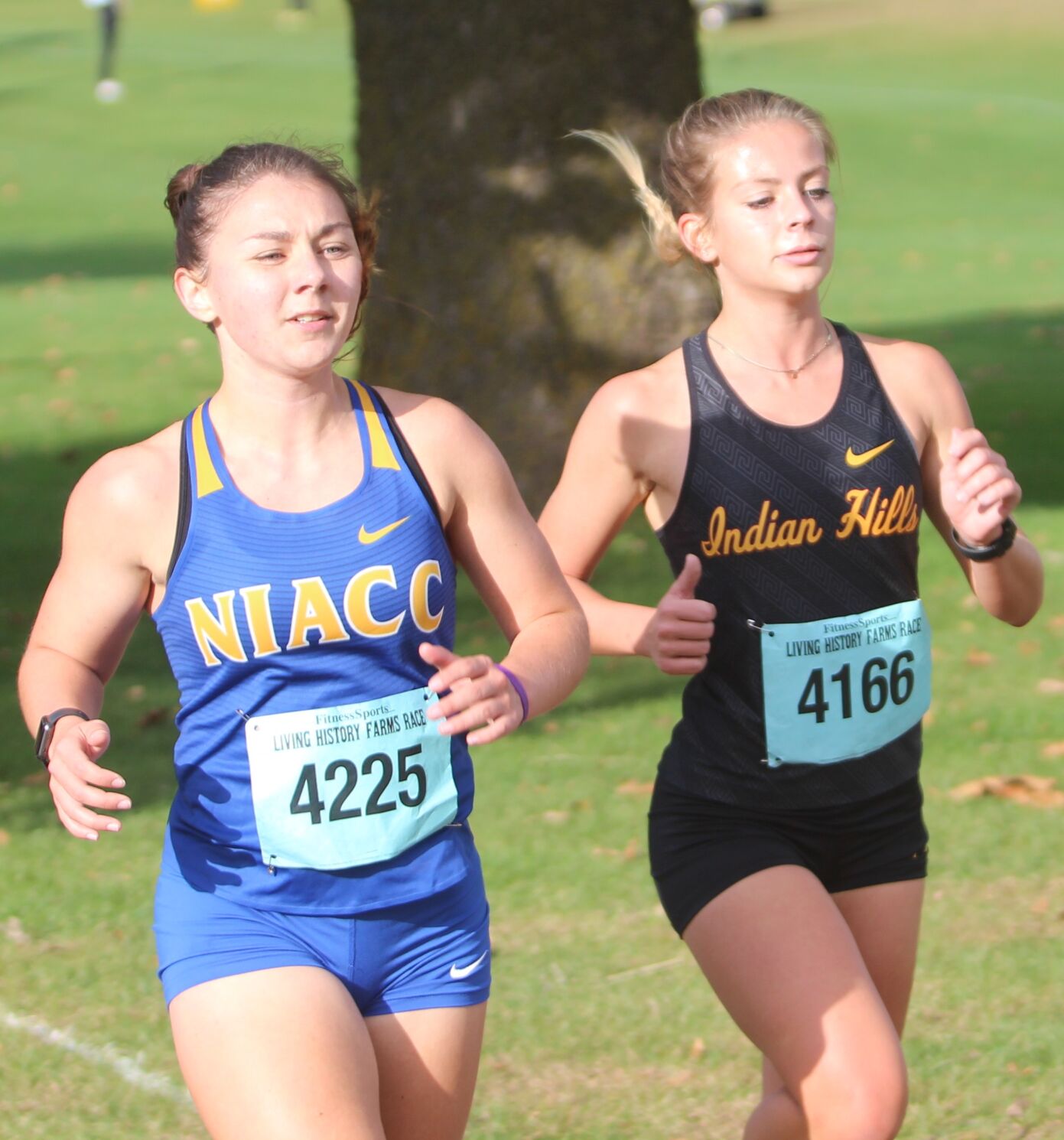 OTTUMWA – The soft fairways of Cedar Creek Golf Course were nice. The flatter layout of the course was even nicer for all the runners used to running a hillier course in Ottumwa.

Emily Casterline might have preferred taking the road less traveled earlier this month when the Indian Hills cross-country teams wrapped up the best regular season in program history two weeks ago at their home invitational. In her first year as a member of an IHCC women's cross-country runner, and second year as an Iowa resident, the native of New Jersey has come to love taking the back roads during runs around the southeast Iowa countryside having grown around a lot of concrete in the northeast.

"I love when we go out to run on the gravel roads," Casterline said. "We didn't have anything like that back in New Jersey. Everything was pavement. Running on the gravel roads along the cornfields is probably my favorite thing to do."

Casterline has led the way for the Warrior women to a top-20 ranking, giving IHCC two nationally-rated teams for the first time in program history. Both ranked Warrior squads wrapped up the regular season on Oct. 15 running in front of several home fans, including many former and current student athletes and teammates, during the biggest home cross-country invitational yet hosted by Indian Hills.

The Warrior men will enter this weekend's Iowa Community College Athletic Conference meet ranked 11th in the country, just falling out of the top 10 after finishing second in their home invitational two weeks ago with 49 points. Iowa Western, ranked sixth, won the men's team title with 24 points with five runners crossing the finish line in the top 10, two more than the three IHCC runners that posted top-10 times.

The Warrior women, meanwhile, have vaulted into the top 15 after entering the home invitational rated 17th by the United States Track and Field and Cross Country Coaches Association (USTFCCCA). Indian Hills finished third with 66 points, placing four runners in the top 20, moving up to 14th in the country heading into Friday's regional meet in Waterloo.

Casterline continued to set the pace for the IHCC women in the final meet of the regular season, crossing the finish line eighth at Cedar Creek Golf Course two weeks ago posting a time of 20:37.4 at the Warriors' home invitational. Considering Casterline's road to run for the Warriors, it's been a season of unexpected success.

"I took three years off. This has been my first year back in the sport," Casterline said. "I've had to deal with some injuries. I'm continuing to push through that. I was not expecting to have this type of success. The hard work that I've been putting in and our coaches adjusting our workouts have helped a lot."

Casterline is one of the newer Iowans on the Warrior women cross-country team, having just moved with her family to Pella a year ago. Fortunately for Casterline, she has plenty of teammates that have welcomed her in to life in the Hawkeye State with four graduates of area high schools following the New Jersey native across the finish line at IHCC invite.

Ottumwa graduate Monse Chalupa heads to Friday's regional meet having posted her top time two weeks ago at Cedar Creek, finishing 16th for the Warrior women in a time of 21:28.7 knocking nearly 40 seconds off of her personal-best mark. Former Davis County standout Morgan Klaus also posted a new career-best time for the IHCC in the regular-season finale, crossing the finishing line at the home invitational in 21:37.3, placing 19th.

"It was a little rough at first with the heavy mileage, but after awhile you get used to it and you just keep going," Klaus said of the adjustment from running high school cross-country for the Mustangs to running college cross-country for the Warriors. "I've run against so many of my teammates when we were all running for different high schools. We've gone from being great opponents to being great teammates."

Two Wapello County runners have stepped up the help lead the Indian Hills women to a top-15 national ranking for the first time in program history. Cardinal standout Alexia McClure and Ottumwa standout Isabelle Mellin ran around the course at Cedar Creek together at the IHCC Invite with McClure finishing 20th, posting a personal-best time of 21:44.3, while Mellin finished 22nd at Cedar Creek in 21:51.

"If you would have asked me when I was at Cardinal if I would have been running with some of these girls, I'd have told you that you were crazy," McClure said. "We all bond so well. I never would have guessed that. I've played basketball with Isabelle. I ran against Morgan. Now, we're all teammates and we're all running together.

"It's great to be a part of a team that, for the first time, has really been able to show what we can do," Mellin added. "It's kind of paved the way for some of the fast girls that are going to be part of this program next year. It's awesome that we're making a name for the IHCC women's cross-country team. The guys have done great in years past. Now, we've got the women's program up there with them, which is awesome."

Like the IHCC women, the IHCC men are represented well by Iowa-grown talent. Nick O'Connor, a former four-time state qualifier from Clear Creek-Amana, finished the eight-kilometer men's race at the Indian Hills Invitational seventh in 26:17.

"The goal is always to come into a race, get out fast and stay with the lead pack," O'Connor said. "I don't feel like I ran my smartest race at Cedar Creek. It kind of fell apart at the end. I'm looking forward to getting back out there for regionals and nationals after that."

Grinnell graduate Isaac Bryant followed up O'Connor with a time of 26:34.4 to place eighth overall for Indian Hills. The Warrior men also were represented well by some of the area's top running talent including Brady Millikin, an all-state athlete in four different sports at Pekin, who placed ninth in his first run at the IHCC Invite running the Cedar Creek course in 26:42.5.

"I always told my high school coach (Davis Eidahl) that I wanted to run this course instead of Wildwood every year we hosted out meet here in Ottumwa," Millikin said. "He likes the hills at Wildwood. It makes us mentally tougher, apparently. I like this course, personally. I really enjoyed it. It's really flat. You can really get out and go."

Chris Metz placed 12th for the IHCC men at the home invitational in 26:57, coming in just under 15 seconds behind Millikin. Less than 10 seconds behind Metz was another former Pekin all-state runner, Colten Glosser, who rounded out the scoring in the final race of the regular season for the Warriors placing 13th in his second home invitational run crossing the finish line in 27:06.2.

"Even though we've been ranked in the top 10 this season, our goal is not just to finish 10th in the country," Glosser said. "We want to finish well within the top 10. We think we can finish in the top seven or the top eight.

"At the end of the season, you always want to be running your best," Millikin added. "We all ran personal bests at Ottumwa or were really close to them. I think we're heading into the right direction."

NAPLES [mdash] On Friday November 5, 2021, Martha Del (Sedore) Taber, beloved sister, aunt, mother and dedicated grandmother passed away at the age of 69 in her home in Naples, Florida. Martha was born September 1, 1952 in Ottumwa, Iowa to Stanley and Ruth (Scranton) Sedore. She graduated fr…