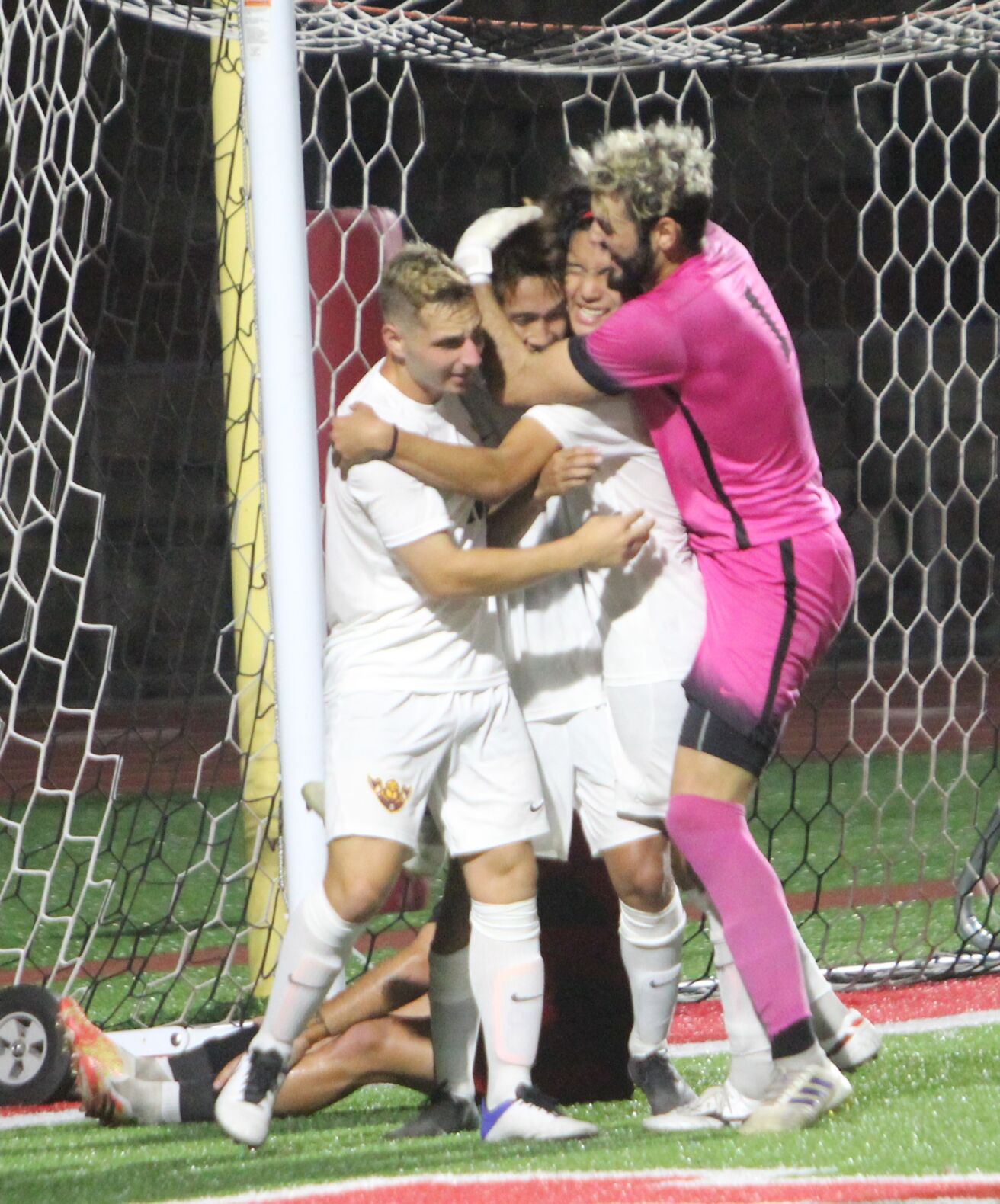 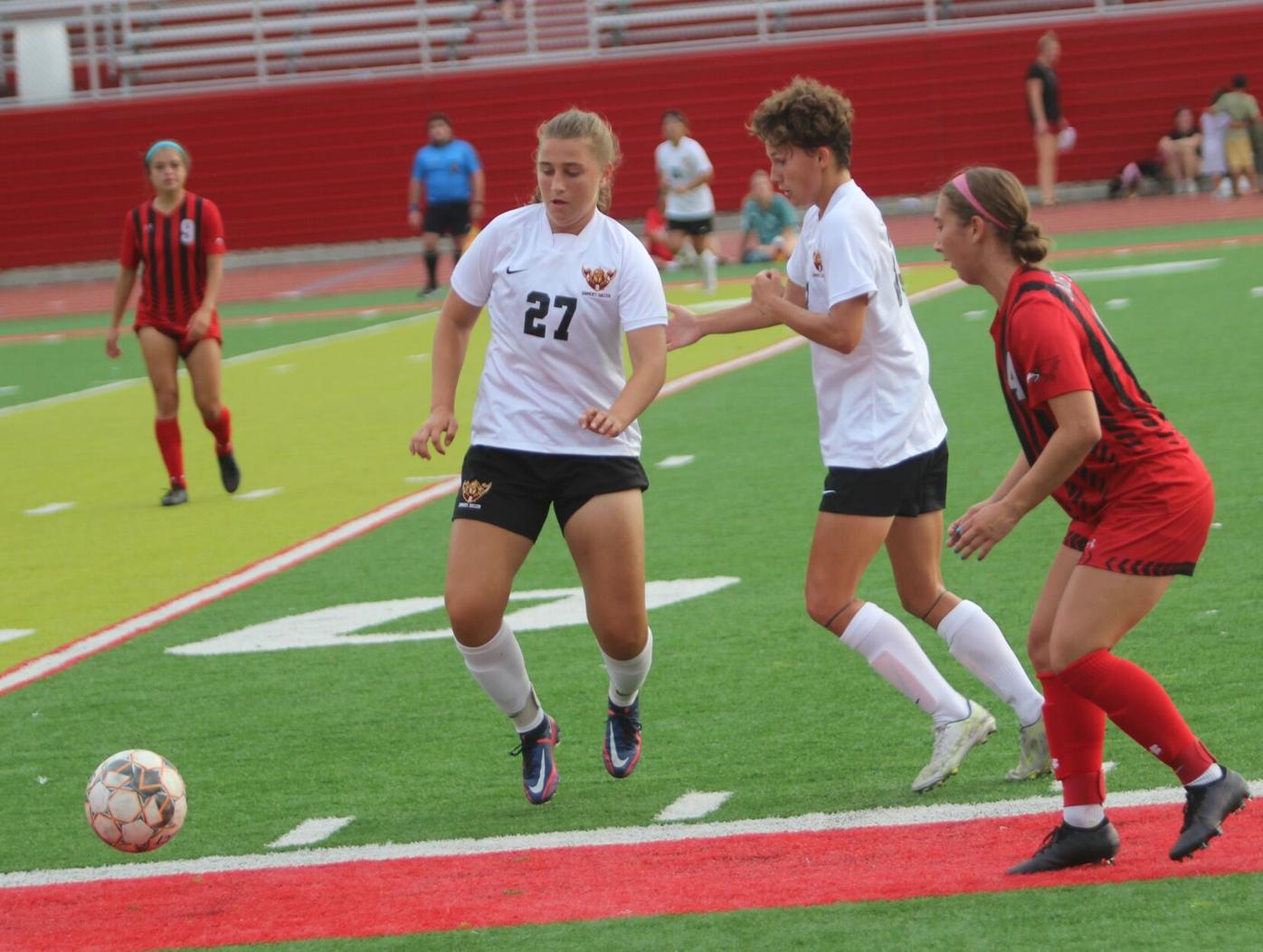 OTTUMWA – The Indian Hills women and men soccer teams saved their biggest goals against Northeast when the lights were on bright at Schafer Stadium on Sunday night.

Risa Ogasawara scored the first golden goal of the season for the 11th-ranked IHCC women, capitalizing on a penalty kick midway through the first overtime period clinching the first close win of the season for the unbeaten Warriors with a 3-2 victory over the Hawks. Shogo Koike proved the IHCC men with some late drama of their own, clinching a 2-0 win in the nightcap of the Iowa Community College Athletic Conference crossover doubleheader by racing down the field and finding the back of the net in the final minute of the match.

"Sometimes, you have games that are a little unexplainable," IHCC head men's soccer coach Kevin Nuss said. "I don't understand why we couldn't perform to our own expectations, our own level. In the end, it's about getting results and we got the results."

The Warrior men had to wait a little later to kick off their first Sunday night match in program history. For the first time this season, the Indian Hills women were pushed beyond regulation by an opponent as the Hawks and 11th-ranked Warriors ended 90 regulation minutes tied at 2-2.

Indian Hills didn't shy away from the first tight match of the season, keeping the ball on their offensive half of the field throughout the opening minutes over overtime. The Warriors outshot the Hawks 13-6 over the final 50 minutes of the match, forcing 10 foul calls on Northeast including a foul drawn in the 95th minute that allowed Ogasawara to earn a penalty kick opportunity.

The sophomore delivered, driving a ball past the dive of Northeast goalie Carolin Stahlmann to clinch IHCC's first win on a walk-off penalty kick since a shootout win over Spartansburg Methodist this past spring at the national tournament.

Despite setting a physical tone in the first half, Northeast could only manage to take a 1-0 lead into the second half. Remani Gurmendi's goal in the ninth minute of the match was the only goal the Hawks could muster.

The Warrior women set a different tone immediately in the second half. The results were just as immediate as Bailey Wiemann scored almost exactly 45 minutes after Gurmendi's goal, leveling the match at 1-1.

"It was definitely a change in pace from what we've seen so far this season," Wiemann said. "We had trouble in the first half connecting and creating things. We had trouble keeping control of the ball and were playing a little too defensive. In the second half, I feel like we were to connect on passes, make good runs and get the ball through for more opportunities."

Weimann would need just 14 seconds to answer a tiebreaking goal by Kyler Bowman for Northeast (4-5), scoring her second goal for IHCC in the 60th minute on an assist from Ikumi Okumura to even the score ultimately ensuring overtime. The Warriors finally clinched an 8-0 start to the season after an offensive run 4:35 into overtime resulted in a handball in the box being called on the Hawks, setting up Ogasawara's golden goal.

"We did a much better job moving the ball quicker. We got our forwards into open space after halftime. We created our own opportunities and kept the ball in their half of the field throughout the second half and overtime," Longo said. "When we can keep the ball on that half of the field so consistently, it just creates problems. They're on their back heels, they're not thinking as quick offensively, they're a little tired and leads to more opportunities to be either lucky or good."

Ronaldo Caravalho appeared to have the IHCC men set up for a big night against Northeast, faking out two defenders in front of the goal before sending home his first goal of the season less than nine minutes into the game, giving the Warriors an early 1-0 lead.

That early one-goal lead, however, turned into a late one-goal edge as Northeast traded scoring opportunities throughout the remaining 81 minutes of play on Sunday. The Hawks (1-8) finished with an 18-17 edge in total shots, including a header in the final two minutes of the first half that struck the cross bar and stayed out as Northeast narrowly missed sending the teams into the second dead even on the scoreboard.

"I think Northeast gave us a look that we were not necessarily prepared for," Nuss said. "As a coaching staff, we figured out a way to exploit that pretty quickly. We exploited it early, than went away from it."

Northeast continued to put pressure on the Warrior defense, forcing Matteo Scarduzio to come up with key saves including a diving stop with under three minutes left in regulation. After making one more stop with one minute left, Scarduzio got the ball to his Warrior teammates creating a quick run down the other end of the field with Koike taking a pass 30 yards from the goal, dribbling in a putting the clinching score past Mateo Keep with 59.1 seconds left to clinch a 5-1-2 start for the Indian Hills men this season.

"That's the best way to finish a game," Carvalho said. "Scoring a goal and winning 2-0 just confirms everything for us. Every game is different. There's different challenges in every game. We just have to adapt. It took us awhile, but we showed character.

"We felt one more goal was coming, but we didn't know when. It might have come in the final minute, but we'll take it."

Indian Hills will host Hawkeye in an ICCAC crossover clash on Wednesday night. Action gets underway with the women's match at 7 p.m. The men's match is scheduled to start at 9 p.m. Expect soccer to be playing deep into the late-night hours at Schafer Stadium.

"It's a thing they do in Europe where they play a lot of games really late," Nuss said. "This is definitely the latest game I've ever coached. Some of these guys stay up pretty late, so maybe this will turn out to be a good thing."

According to Carvalho, that all depends on your Thursday class schedule.

"It's going to be pretty interesting playing a match that starts at 9 p.m. when you've got an 8 a.m. class the next day," Carvalho joked. "We love the game. We're going to do whatever it takes to play, but we might be a little more motivated to avoid going into overtime on Wednesday."