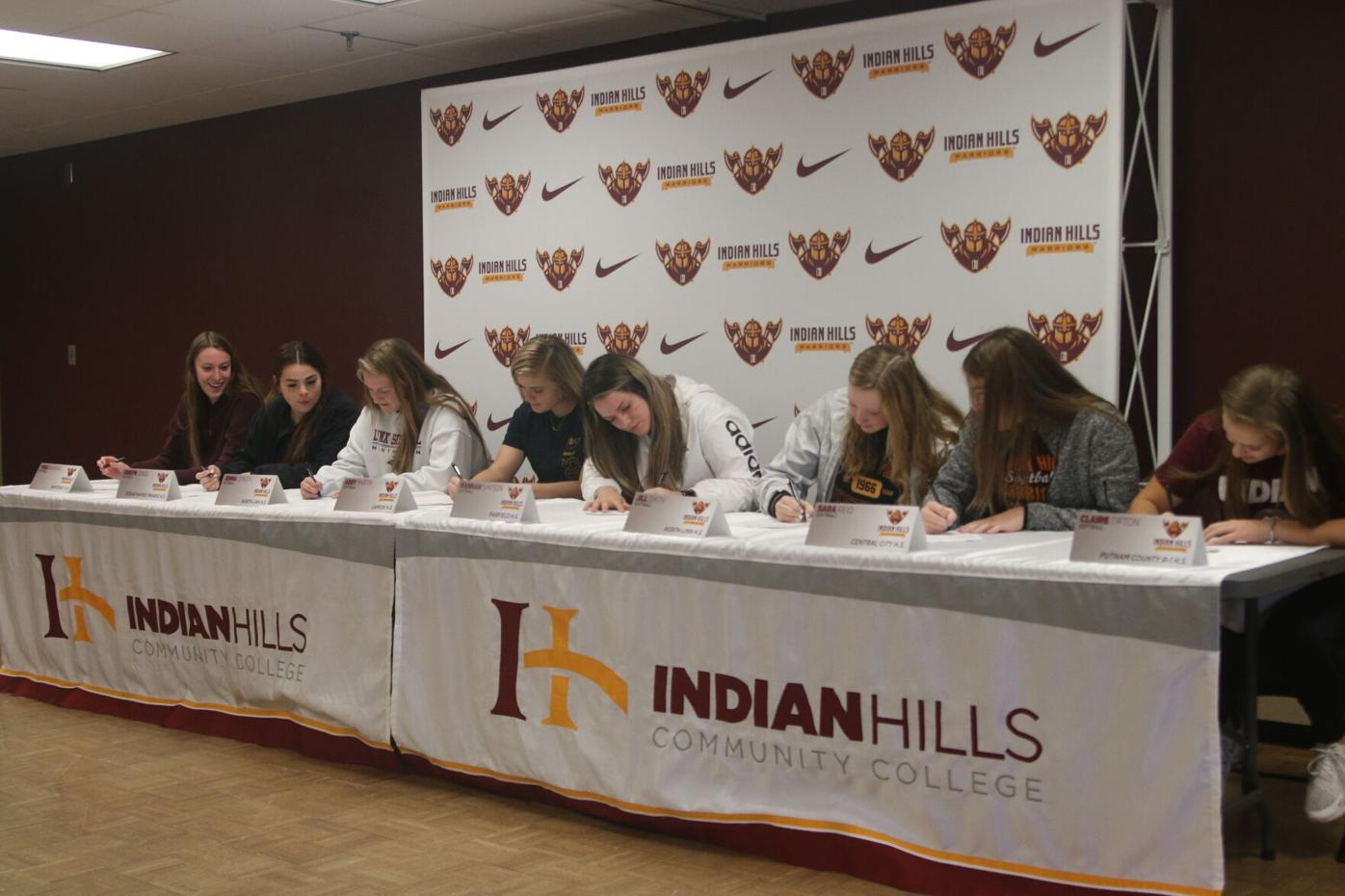 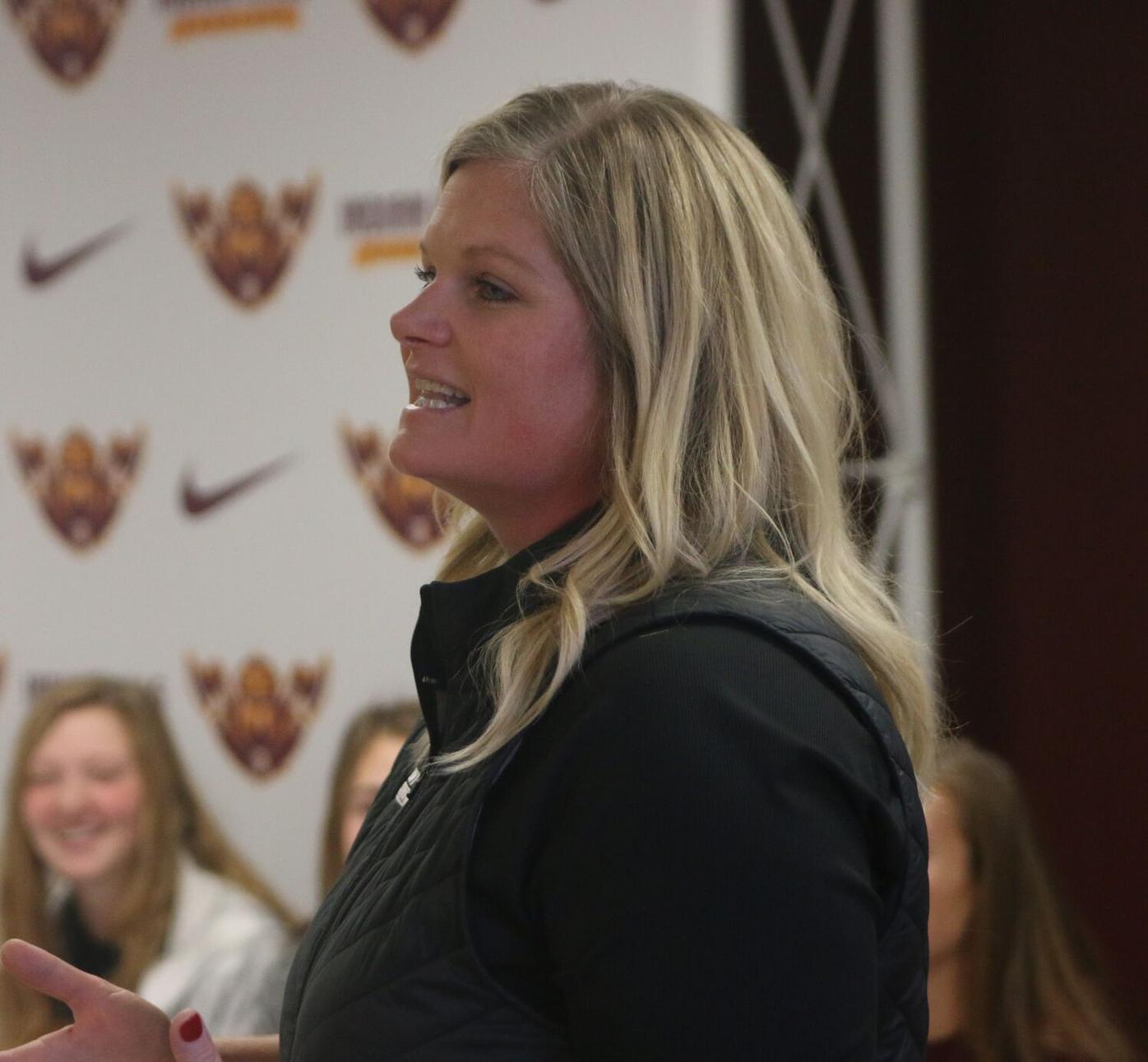 Indian Hills head softball coach Lindsay Diehl talks about the latest class of high school softball players that signed their letters of intent with the program on Saturday at the Hellyer Student Life Center in Ottumwa.

Indian Hills head softball coach Lindsay Diehl talks about the latest class of high school softball players that signed their letters of intent with the program on Saturday at the Hellyer Student Life Center in Ottumwa.

"We've been playing together since we were in sixth grade," Lemley said.

Lemley and Smith will now be teammates beyond 12th grade. The North Linn senior teammates were two of the eight high school softball standouts to sign letters of intent with the Indian Hills Warriors on Saturday at the Hellyer Student Life Center.

"I've played with Jill for a really long time and we play really well together," Lemley said.

"We have a good bond. She's my catcher when I'm at shortstop, so we have a great bond in the field together," Smith added. "It's a great bond to have."

It's a bond that have helped Lemley and Smith be part of a North Linn dynasty as the teammates will look to help guide the Lynx to a fourth straight 2A state championship game this upcoming summer. The future IHCC teammates have a chance to be a part of three state championship seasons in five years should North Linn make that run to the 2022 title this July in Fort Dodge.

For Lemley and Smith, the focus will only be on trying to go out at North Linn as champions having taken care of their upcoming first two years of college softball by signing Saturday with Indian Hills.

"It's going to be way easier this year to focus on that goal of a state title," Smith said. "Junior year is always a big year in recruiting. Having that weight off your shoulders and being able to have fun playing softball together is going to be a lot easier."

"We always try to separate ourselves from other people and make something a little bit different at Indian Hills," Diehl said. "As we were talking through the signing process with kids, we decided we wanted to bring them all to campus and have all their families here for such a big moment. It gives everyone a chance to meet the kids that are currently here and get them to feeling like they're a part of our family."

The eight signees are certainly no strangers to one another. Many have been teammates for the Eastern Iowa Barracudas, a fastpitch softball program made up of 10 different teams from 10U all the way up to 18U that has currently produced 69 players that have or are currently gone on to play college softball at the NJCAA, NCAA Division II or NCAA Division I levels.

Besides travel ball, many players are familiar with having faced each other on the high school diamonds over the last several summers. Banning and Simpson, for example, each have hopes this summer of leading their respective teams to the Class 4A state softball tournament and could meet up somewhere in the postseason before coming together as teammates at IHCC.

"I've always wanted to hit off Thea Banning," Simpson said with a smile. "It'd be a great challenge, but I'd be up for it."

Simpson joins her older brother, Austin, in taking the JUCO route after shining on the diamond at Fairfield. The two-time All-Courier high school baseball captain, Austin Simpson went on to play his first two years of college ball just a few miles east on Highway 34 at Southeastern Community College before moving on to play four-year baseball at Quincy University.

Hannah Simpson, a three-time All-Courier and two-time all-state first baseball for the Trojan softball team, is excited to bring her power at the plate to Indian Hills starting next year. Considering the talent that was in the room with her on Saturday, Simpson can certainly see an opportunity to come through at the plate in some very big games for the Warriors.

"We are stacked for next year. It's going to be very exciting to see how far we go and where we go," Simpson said. "I like the way that Coach Diehl coaches. That's what really drew my attention to go the JUCO route. I still have a lot of room for improvement. I feel like Coach Diehl and the coaching staff here will change me for the better."

Among the signees on Saturday, one did so just a few feet from the names of two hall-of-fame family members. Reid follows in the footsteps of cousins Karen and Cindy Smith, both of whom have been inducted in the IHCC Athletic Hall-of-Fame for their accomplishments on the diamond for the Warriors.

Living up to hall-of-fame talent within her family, however, is nothing new for Reid. The Smith sisters are just two members of a very talented athletic family that the Central City standout is a part of.

"My mom (Lisa Funke) is also in athletic Hall-of-Fame at Mount Mercy University," Reid said. "It kind of runs in the family. My brother (Nick) is playing college basketball at Upper Iowa. He scored 76 points in a game in high school. Hopefully, I'll have a chance to make my own mark while enjoying my time here at Indian Hills."