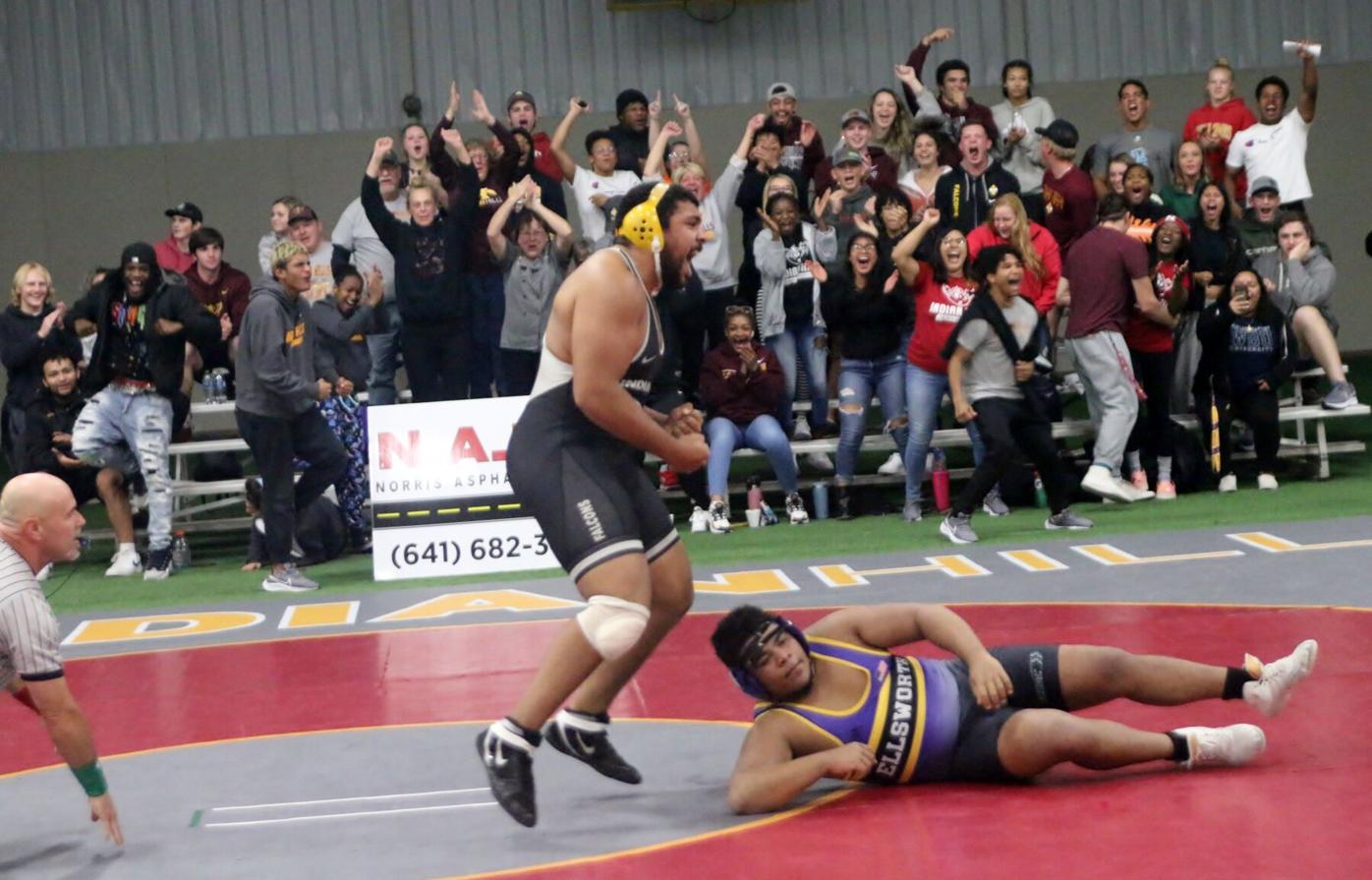 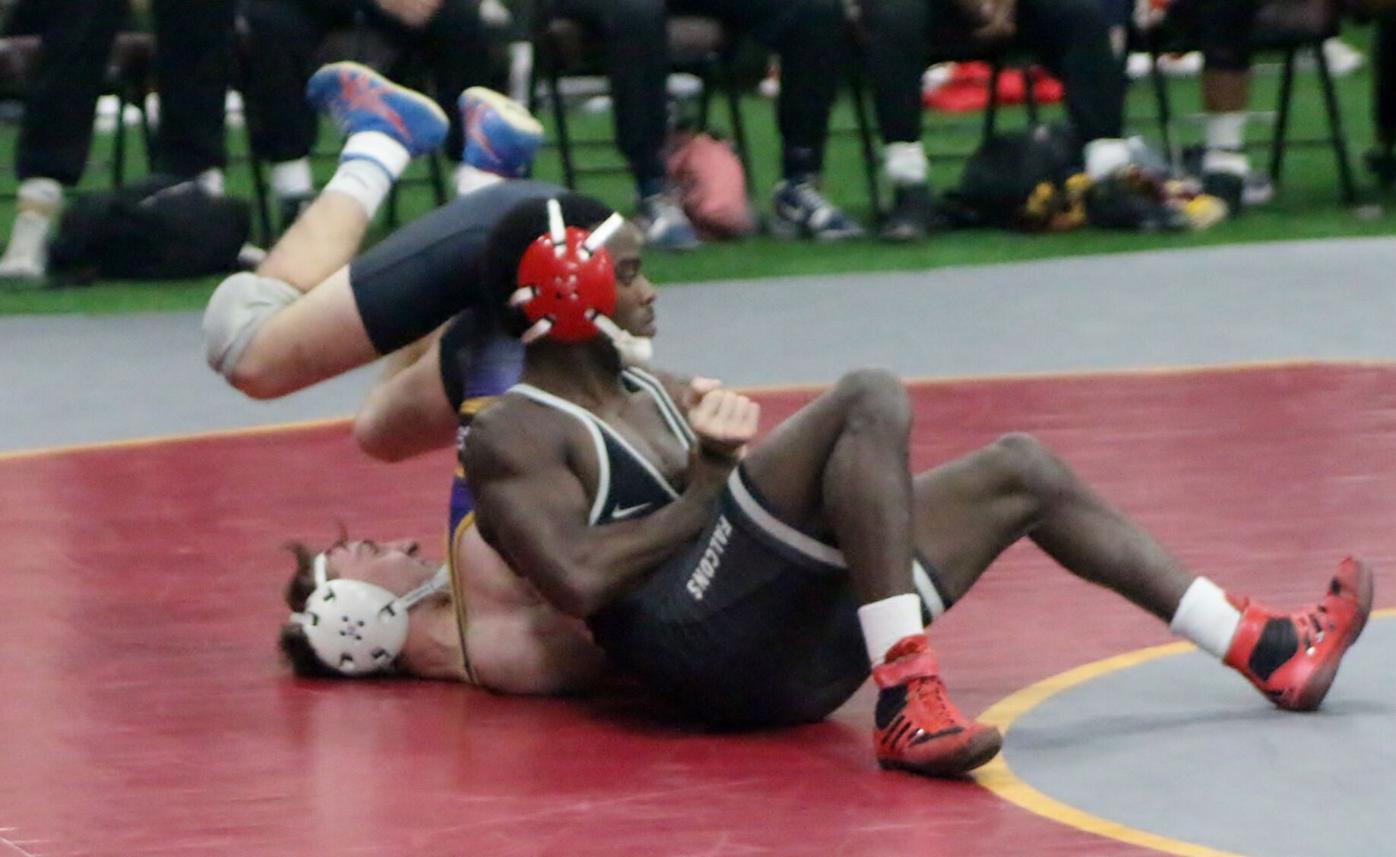 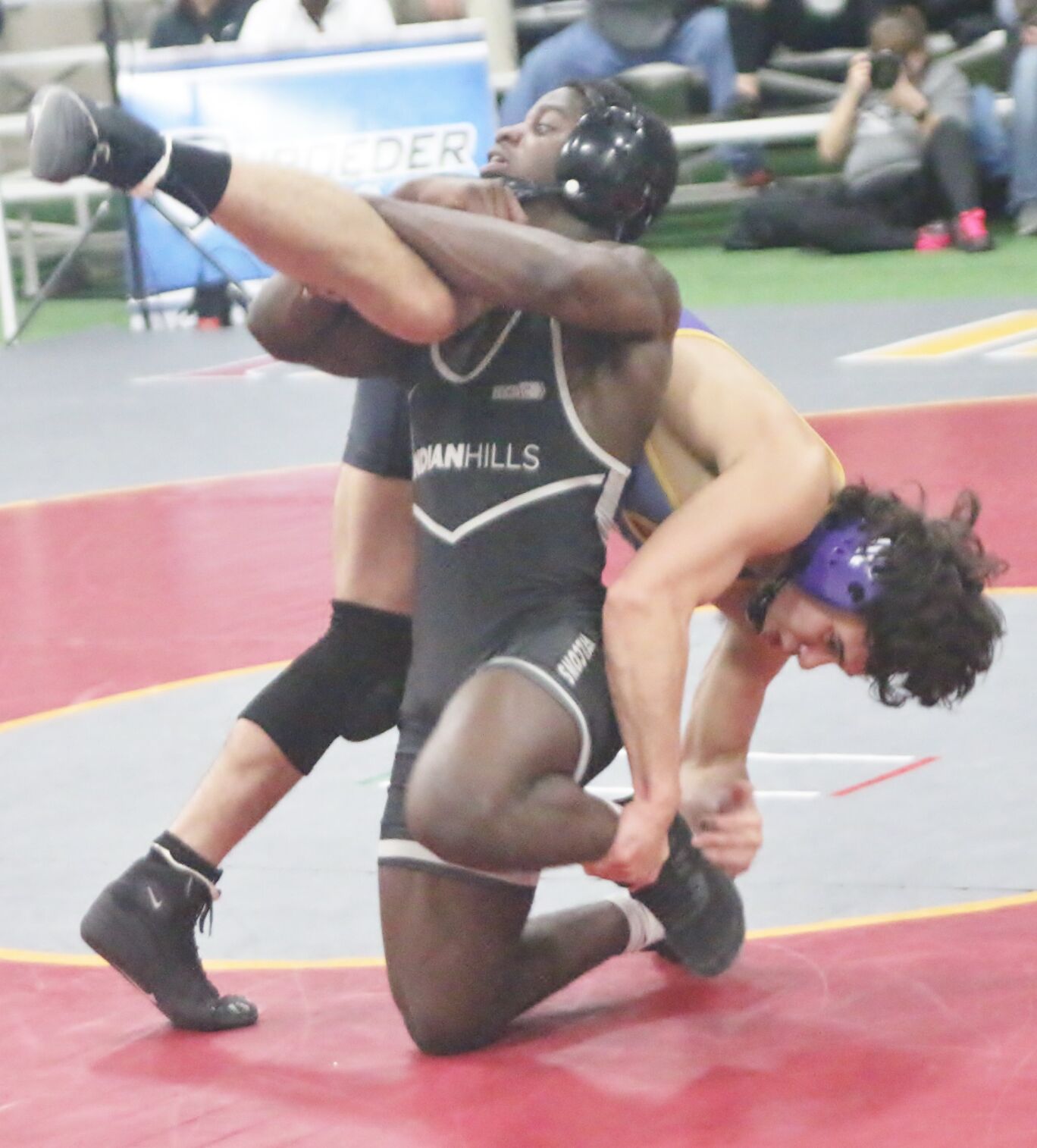 On Wednesday night, the COVID-freshman from East Peoria jumped for joy.

What's the next celebration that Collins will come up with?

"I don't know. Maybe a back flip," Collins joked.

As long as he doesn't hurt himself, Indian Hills head wrestling coach Cole Spree would be happy to see Collins celebrate at the end of every men's wrestling dual this season. Collins celebrated on Wednesday after scoring a first-period fall against Ellsworth freshman Marcus Hester, clinching a 28-17 Iowa Community College Athletic Conference win over the 20th-ranked Panthers for the fifth-ranked Warriors at the Multipurpose Center on the IHCC Centerville campus.

"I don't know if Caleb can even do a back flip. It'd be cool if he could, but I'll just take the team points," Spree said. "I'm just so darned proud of that kid. One month ago, he tried to quit and I told him to get all the bad memories out of his head. I think he only won one match last year. To go out and have the success he's had over our first two duals, there's no person with a bigger heart that deserves it more than Caleb Collins."

The second straight ICCAC dual win at home for the Warriors was much more competitive than last week's 27-9 victory over No. 10 Iowa Central. Ellsworth led 12-6 nearing the midpoint of the dual and were a takedown away from taking a nine-point edge into the final five matches.

Destin Jones, however, was able to score a much-needed win for the Warriors. The Miami native battled deep into a two-minute overtime period with Ellsworth freshman Diego Isiorida before finally scoring the decisive points on a takedown with 16 seconds left in overtime, earning a 9-7 win at 157 pounds cutting the Panther dual lead to 12-9.

"Last week, everyone was blaming Destin's result (a 7-6 loss to Iowa Central sophomore Nolan Miller-Johnston) on his cardio. I don't blame it on his cardio, it was with his fight," Spree said. "If you fight, good things happen. Twice, he was in really bad positions where he could have quit. About 90 percent of people would have quit. He became one of those 10 percent and, because he became one of those 10 percent, he won. It's so good to see him get rewarded that way."

Cameron Nesbitt used a late takedown of his own at 165 pounds to give IHCC it's first lead in the dual, finishing off a 12-3 major decision over Ethan Miller to put the Warriors ahead 13-12. Top-ranked returning All-American Deron Pulliam then followed up a tech fall by Ellsworth freshman Nolan Craine by pinning Jared Landsperger in 2:16, putting the Warriors back on top 19-17 with two matches left.

"We just had to go back in the room and work on going forward instead of just staying in place," Pulliam said after settling for a 3-2 decision against Iowa Central freshman Aiden Carr. "When I go forward, I score more points. I made a few more adjustments after last week's dual and got a little better."

Sixth-ranked COVID-freshman Khris Walton added an 8-3 win over Isaiah Laguna at 197 pounds, giving Indian Hills a 22-17 lead in the dual setting up Collins to secure the win simply by avoiding a fall in the heavyweight finale. Collins didn't worry about playing defense against Hester, going right for the Ellsworth freshman resulting in a quick takedown that brought IHCC fans to their feet.

"My mindset going in was that I thought about it more like a war in a way," Collins said. "If I didn't go out there to give it my all, even if I would won on points and didn't get the pin, I'd feel like I was letting down my team."

Indian Hills improves to 2-0 in ICCAC duals as Spree earned a win over his former school. The current IHCC head wrestling coach spent eight years developing 29 All-Americans, 11 national tournament finalists and six straight finishes in the top 10 as a team at the national tournament at Ellsworth before becoming the first head coach in the history of the Warrior wrestling program.

Fifth-ranked Indian Hills returns to action at the Lindenwood Open on Saturday. Action at the Hyland Arena in St. Charles, Missouri, gets underway at 9 a.m.