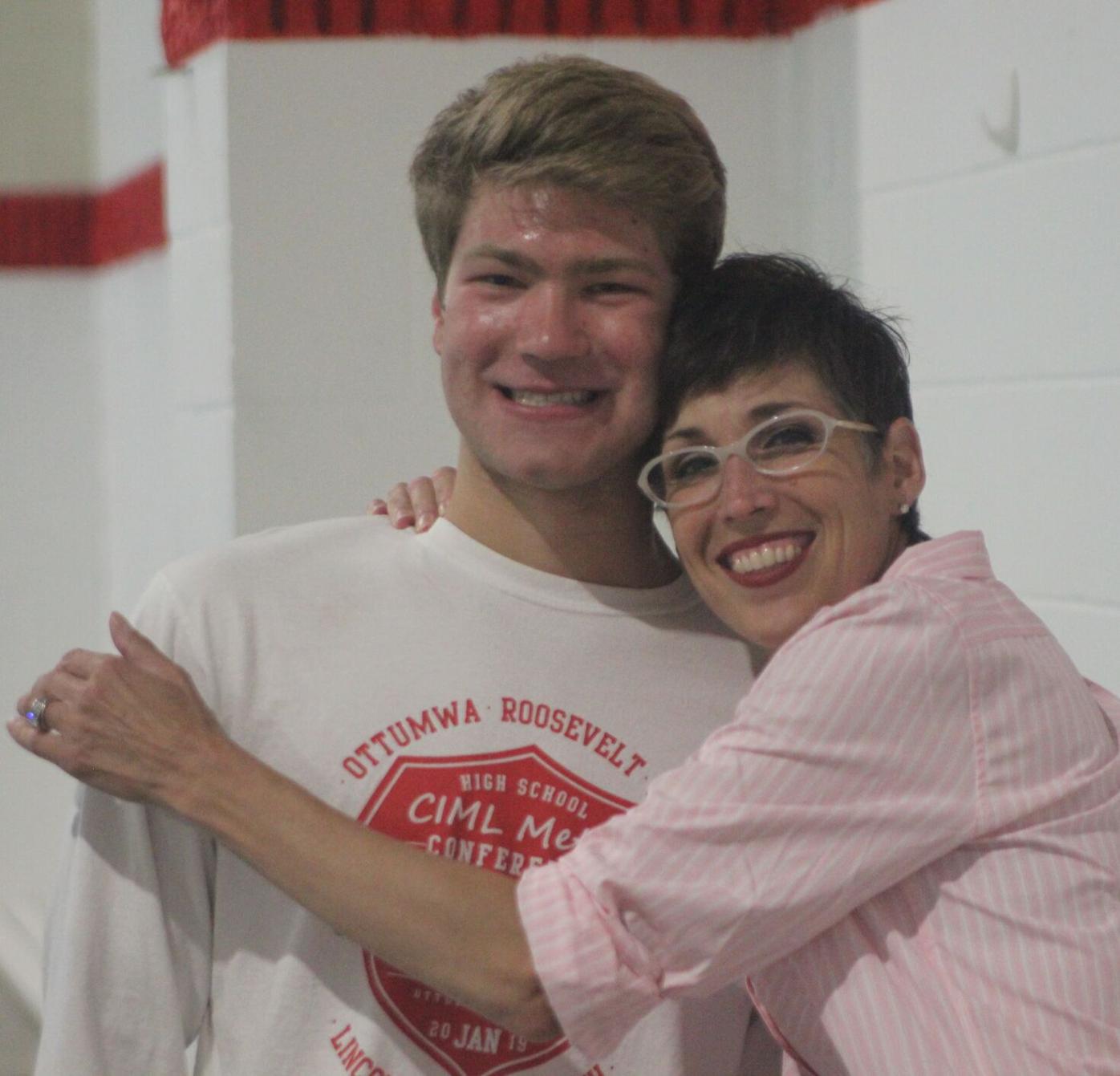 Kevin Kretz (left) receives a hug from Ottumwa High School head boys swimming coach Cherie Langland (right) on Thursday at Mike McWilliams Pool. Kretz was honored by the program on Thursday after closing out his high school swimming career breaking the school and pool records in the 50 freestyle. 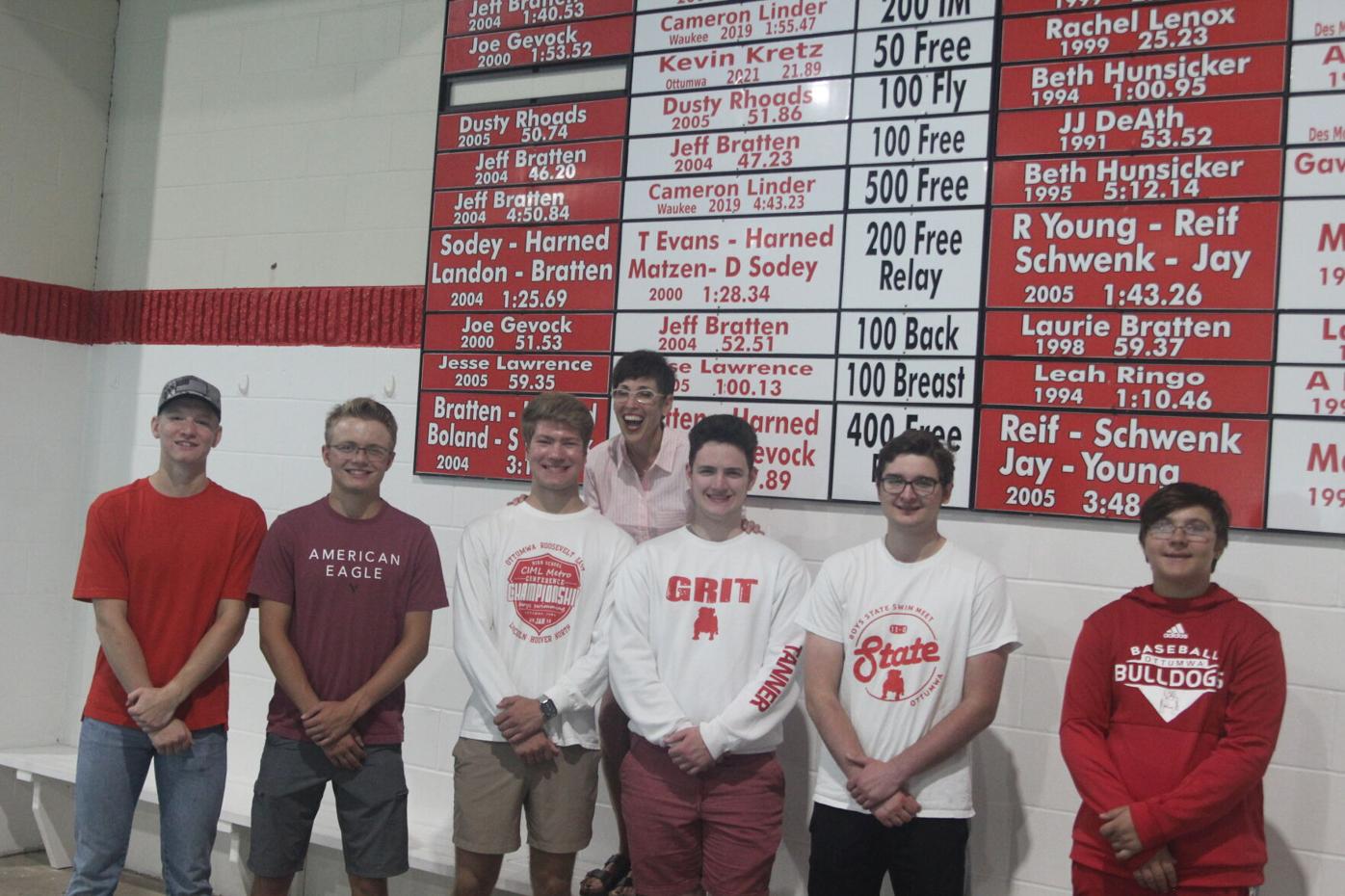 Kevin Kretz (third from left) is joined by several Ottumwa High School boys swimming teammates and head coach Cherie Langland (standing, middle) below the OHS swimming record board where Kretz will have his name in both 50 freestyle columns as the owner of the school and pool records in the race.

Kevin Kretz (left) receives a hug from Ottumwa High School head boys swimming coach Cherie Langland (right) on Thursday at Mike McWilliams Pool. Kretz was honored by the program on Thursday after closing out his high school swimming career breaking the school and pool records in the 50 freestyle.

Kevin Kretz (third from left) is joined by several Ottumwa High School boys swimming teammates and head coach Cherie Langland (standing, middle) below the OHS swimming record board where Kretz will have his name in both 50 freestyle columns as the owner of the school and pool records in the race.

His impact on the program, however, was evident once again on Thursday as teammates and friends shared in a morning gathering to celebrate the accomplishments of the three-time state medalist. Kretz will soon have his name on the Ottumwa High School swimming record board as both the school and home pool record-holder in the 50 freestyle.

After breaking the longest-standing OHS boys swimming record last season, lowering Rod Starkweather's time of 21.66 set back in 1983 to 21.64 with his swim at state as a junior, Kretz went out in record style this past winter. After setting the new pool record in the 50 freestyle with winning swim of 21.89 seconds at the CIML Metro Conference meet in late January, the Fairfield senior closed out his high school swimming career breaking his own OHS school record by finishing the 50 freestyle in 21.3 seconds, placing sixth at the 2021 Iowa High School State Swimming Meet.

It was fitting that Kretz was able to share one final day together members of the Ottumwa High School boys swimming team, many of whom will be returning next season to continue building on the recent history of success for the program. Without those teammates, both past and present, Kretz is the first to admit his name wouldn't be up on the board at Mike McWilliams Pool.

"The most important is that it's not possible to accomplish this without having Cherie (Langland) as my coach or having these guys as my teammates," Kretz said. "I also have to thank the Ottumwa school board for alowing swimmers from Fairfield to continue to be a part of their program. There's a lot of things that go into a record. I'm so thankful and appreciative for everyone that has supported me and helped me get here."

The resume for Kretz speaks for itself, having qualified for the high school state swimming meet in all four years with Ottumwa winning medals with top-10 finishes in the 50 freestyle as a senior and the 100 freestyle as a junior. Kretz also represented the Ottumwa Hurricanes YMCA program for over a decade, winning multiple YMCA state title and representing the program at the Short Course YMCA Nationals in 2019.

"There is no replacing a person like Kevin Kretz because of everything that he brought to our program," Langland said. "He's been the hero to every swimmer in this program. The fact that he was such a hero speaks volumes to who he is as a swimmer and as a teammate. His character is such that he was always looking out for the goals of his teammates and celebrated everyone of those goals.

"He exemplified everything that the program standards that we always talk about. Integrity. Honesty. Hard work. Great sportsmanship. I tell our swimmers all the time those are not just empty words. They have a huge amount of meaning and Kevin exemplified every one of those words."

When it came to record-setting swims, Kretz initially saw himself leaving a mark on the program in the 100-freestyle. Ultimately, Kretz finished just 0.6 seconds shy of breaking Jeff Bratten's 17-year record mark in that race at state, placing seventh in 46.79 seconds coming within one solid turn of what would have been his second school record.

"I'm really glad it ultimately was the 50 freestyle that I set the record in," Kretz said. "There's so much hard work that goes into lowering your time in that race. Being that it was the longest-standing school record, it's pretty humbling to be able to break it twice.

"There are so many factors that have to go right to lower your time in the 50 freestyle because you don't have a lot of distance to make up time," Langland added. "I think there was so much pressure that Kevin put on himself to break a record, and to break the longest-standing record in the school's history, only adds to the achievement."

Ultimately, Kretz closed out his high school swimming career with a record-setting stretch of late-season swims. Not only did Kretz cement his place across the 50 freestyle mark in Ottumwa High School swimming history, but did so while also setting CIML Metro Conference meet records in both the 50 and 100 freestyle, finishing the 100-meter conference race in 47.94 seconds.

"It's tougher to get to that record the first time. Once you've broken it, then it just become a matter of lowering a personal best," Kretz said. "When you break a record and have a season to do it again, it becomes motivating. You want work even harder. Having all these guys behind me supporting me, it feels like you're doing it for your family. If I could help motivate anyone of these guys to have a chance to get up on the record, it'd be awesome to see."

Langland feels that the record-setting swims of Kretz will have an impact on Ottumwa swimmers across each program. Already several members of the OHS girls swimming team have set their sights on setting multiple school records this fall.

"Having his name up there is a reminder of what hard work can achieve," Langland said. "We see all those names up there, but for the kids swimming today, it's one of their own. There are names up there our swimmers don't have any familiarity with, but most of them have swam with Kevin for several years.

"We've got a current legend that's up on that board with some of the all-time greats of Ottumwa swimming. It's someone that all our swimmers can strive to be like. That's motivating for everyone. Those swimmers that have been lucky enough to swim with Kevin can take so much away from that experience to help them be better swimmers and better humans. Our program is incredibly thankful for everything he's done for us."