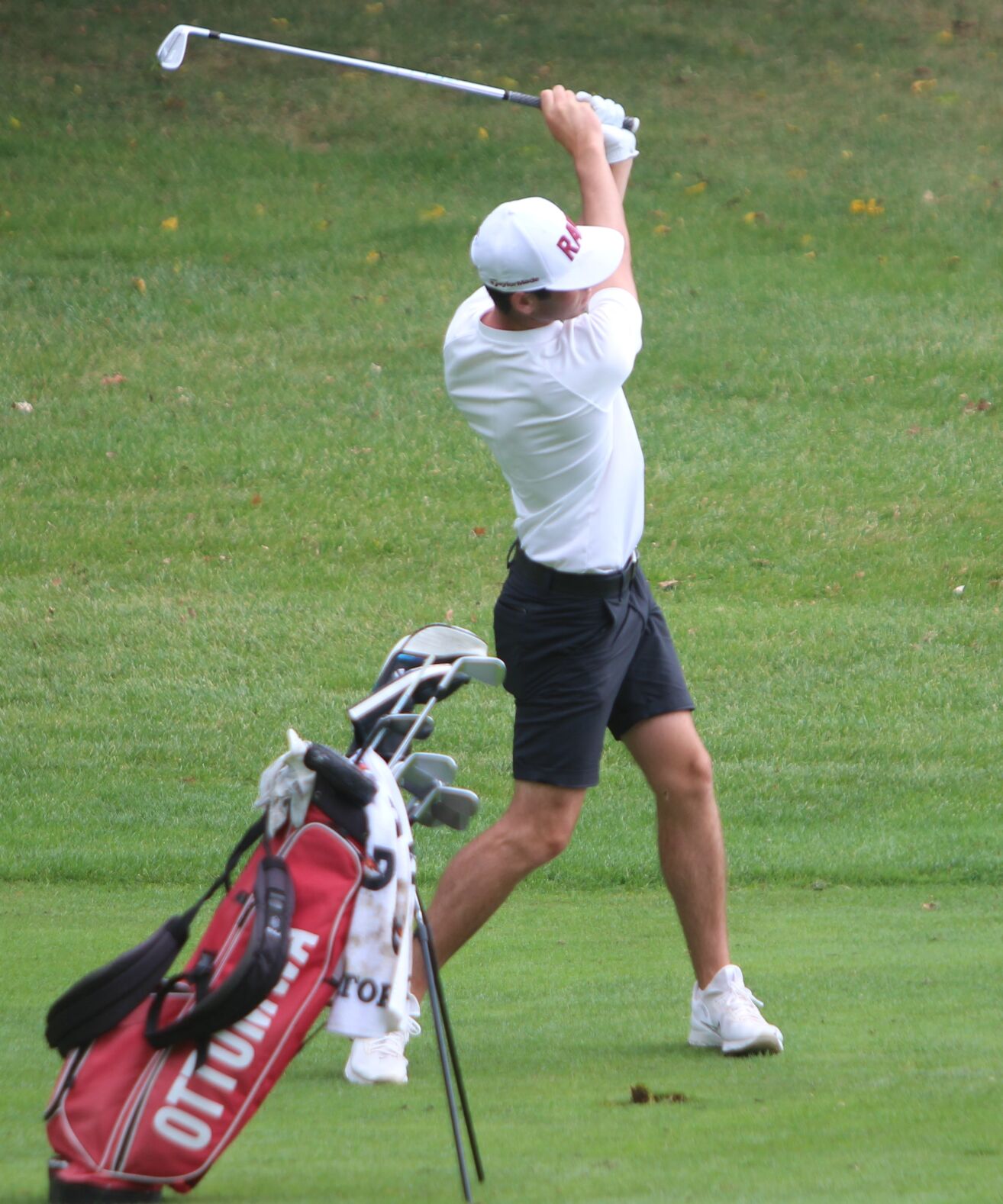 Ottumwa senior Cale Leonard fires his second shot to the 18th green during the Class 4A district boys golf tournament on Tuesday at the Burlington Golf Club. Leonard qualified for the Iowa High School boys state golf tournament, winning the individual district title after posting a three-under-par round of 69. 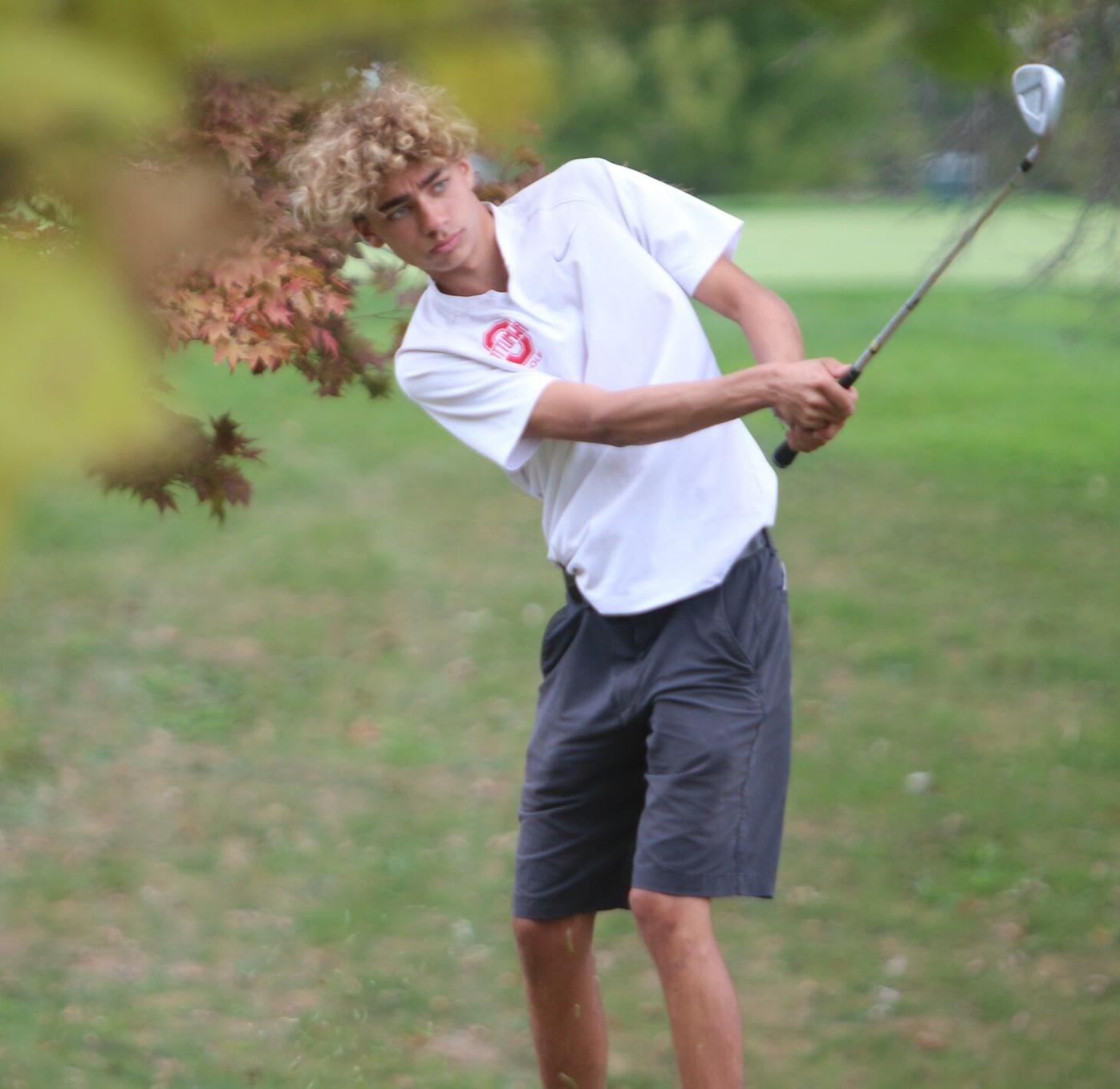 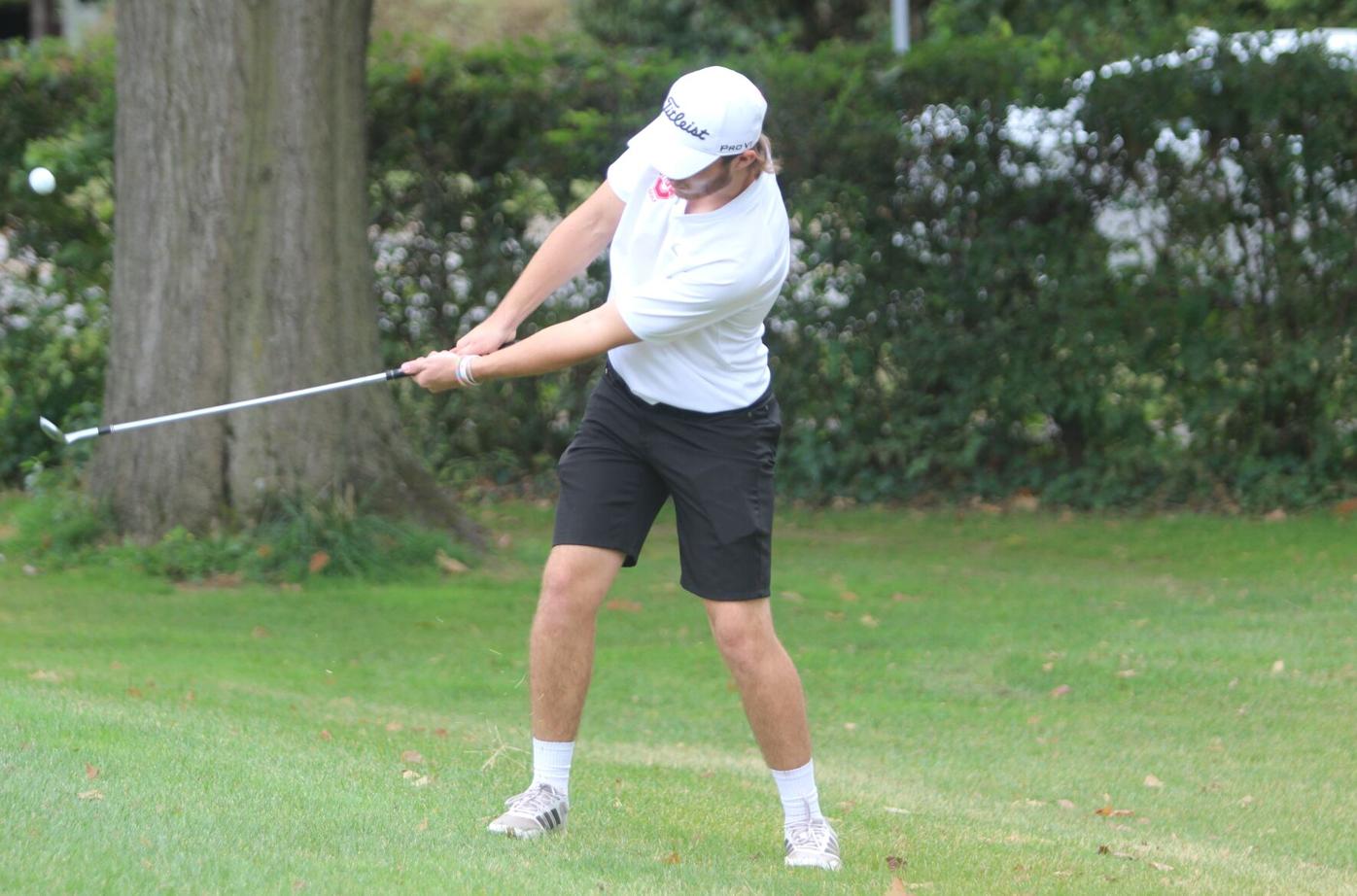 Ottumwa senior Cade Hougland chips from just off the 18th green on the way to a par on Tuesday at the Burlington Golf Club during the Class 4A boys district golf tournament.

Ottumwa senior Cale Leonard fires his second shot to the 18th green during the Class 4A district boys golf tournament on Tuesday at the Burlington Golf Club. Leonard qualified for the Iowa High School boys state golf tournament, winning the individual district title after posting a three-under-par round of 69.

Ottumwa senior Cade Hougland chips from just off the 18th green on the way to a par on Tuesday at the Burlington Golf Club during the Class 4A boys district golf tournament.

BURLINGTON – In previous years, something like an errant opening tee shot might have set the tone for a disappointing day on the course for Ottumwa senior Cale Leonard.

On Tuesday, Leonard took it in stride and took his medicine settling for a bogey on his first hole of the Class 4A district boys golf tournament.

"Then, he woke up and decided to start playing some golf," Ottumwa head coach Kyle Creamer said with a smile.

Leonard would post three birdies on his opening seven holes at the Burlington Golf Club, ultimately closing out his round with five birdies to counter a pair of early bogeys closing his final high school state qualifying tournament with a three-under-par round of 69 to win the individual district championship clinching a second straight trip to the Class 4A Iowa High School Boys State Golf Tournament. After finishing eighth last year in his state debut, Leonard will have a chance to become Ottumwa's first boys state golf champion since Matthew Walker's second championship season in 2012.

"There's a lot of great players from all over the state that I'll be going up against," Leonard said. "If I want to compete for that individual state title, I'll have to shoot two good scores. If I can shoot 69 both days, I'd have pretty shot at it, but we'll see what happens when we get there."

Leonard nearly paced a state-qualifying effort for the entire Ottumwa High School boys golf team on Tuesday. The Bulldogs wound up just missing out on qualifying with one of the top three team scores at districts, finishing fourth in the 14-team tournament with a score of 333. Pleasant Valley (303), Burlington (305) and Cedar Rapids Prairie (324) secured the three tickets to state while Linn-Mar junior Caden Postma joined Leonard as the two state-qualifying individuals after Postma placed sixth overall on Tuesday at districts with a three-over-par round of 75.

"We strive to give ourselves a chance each year to qualify for state as a team. We were pretty darn close, only missing out as a team by nine shots," Ottumwa head boys golf coach Kyle Creamer said. "Everybody could go through their individual rounds and probably find a couple of shots they could have hit better, but we didn't know what to expect from this team at the beginning of the year. We weren't sure if we'd even get to this point as a team after the first couple of meets, but we made it into the 330s, which is where we expected to be at the end of the year."

Tyse Barker finished up his Ottumwa High School golf career on Tuesday placing 14th at the district tournament, finishing six shots shy of a state berth with a round of 81. Fellow Ottumwa senior Trent Grooms finished with an 88 for the Bulldogs, placing 31st improving by four shots on his final nine holes including a closing par on the ninth.

"I think the guys were a little more comfortable out here. The greens were a little bit faster, but once the boys got used to that, they were able to leave the ball a little closer to the holes," Creamer said. "All the boys played well. From day one to right now, this is one of the biggest progressions I've seen any of our teams make during the course of a season."

Logan Storto finished out his freshman season for the Ottumwa Bulldogs on the links with a 95 on Tuesday, finishing 54th in his first district tournament. Chase Thompson, another OHS freshman, placed 59th in his district debut after posting a 96 while Cade Hougland rounded out his senior season of golf for the Bulldogs with a 98, placing 62nd overall.

"I would have been in shock if someone would have told me at the beginning of the season we'd have put ourselves in position to be this close to qualifying for state as a team," Leonard said. "I'm proud of all those guys. We started the year out a little rough, but we made a lot of improvements as a team and got a lot better. Getting fourth in any district tournament is pretty good."

Leonard ultimately edged Burlington junior Mateo Rascon by a single shot for medalist honors, getting up and down for a par on the ninth hole after unleashing a long drive that would up just short of the opening hole's tee box that neighbors the ninth green. After chipping onto the edge of the green, Leonard rolled a long birdie putt within a few feet of the hole tapping in for the district championship-clinching par making his opening errant tee shot just a few feet away on the 10th hole five hours earlier seem like a distant memory.

"I think that's going to be the biggest difference this year for me at state. Last year, I let the bad shots linger and I couldn't really get either round going the way I wanted to," Leonard said. "I've been better this year at putting a bad shot behind me. That's what I did in this tournament. I hit a bad tee shot. I shook it off and, by the time I stepped up to the 11th tee, it was already behind me."

Playing clean, confident golf is what it will likely take for Leonard to bring home the state title from the two-day Class 4A state boys golf tournament. The first of the two rounds tees off Friday morning at Beaver Creek Country Club in Cedar Falls with the final round set to be played on Saturday.

"Fairways and greens," Creamer said. "That's what it's going to take to win it."