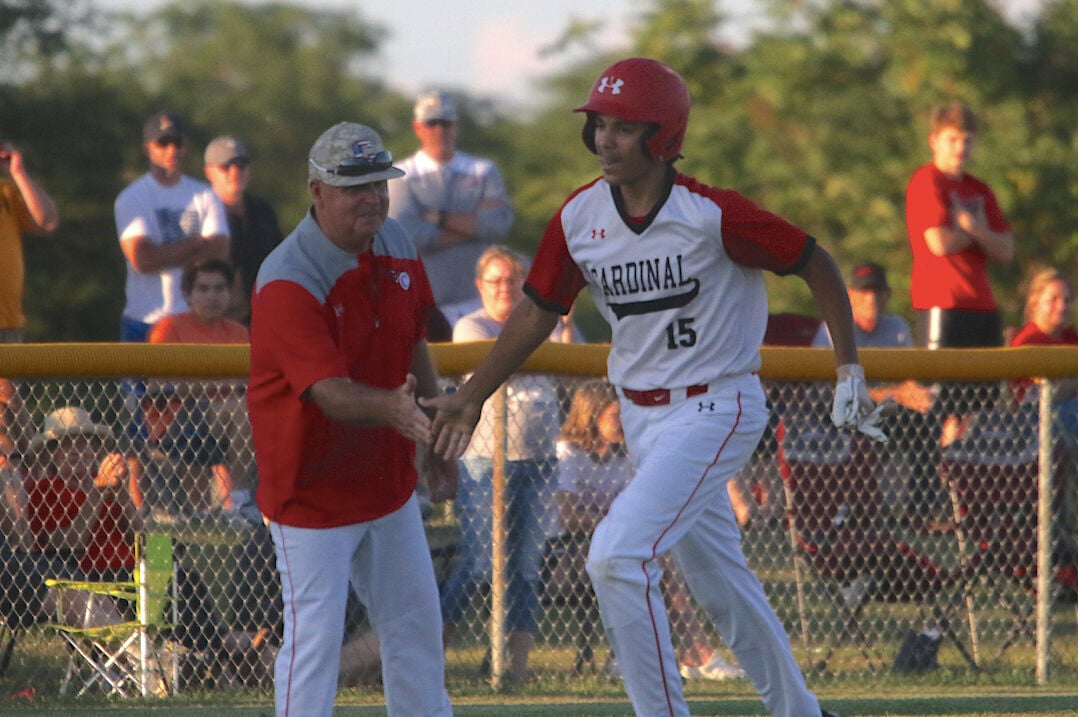 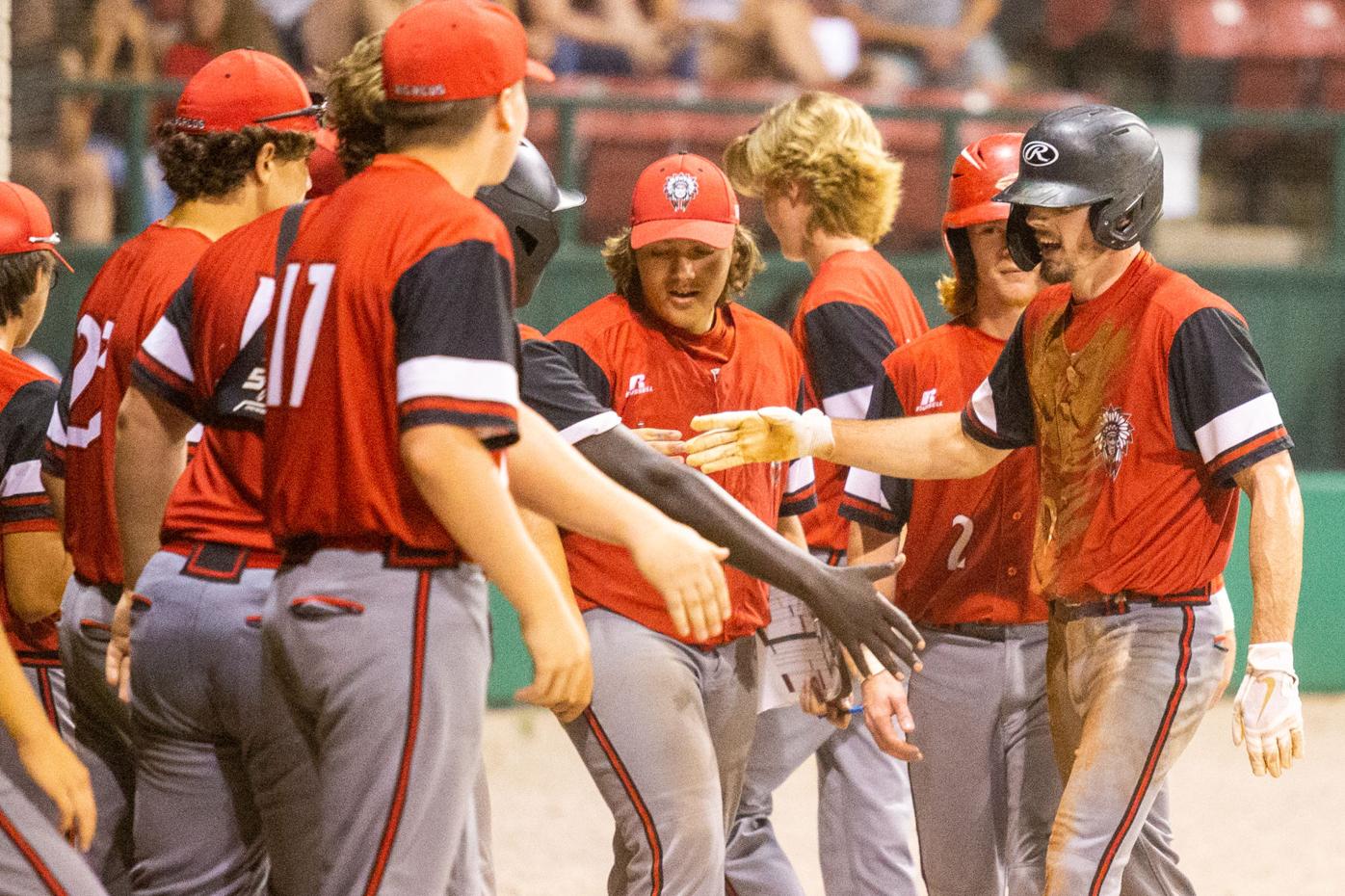 Centerville’s Brady Kauzlarich, right, is greeted by teammates after scoring the tying run in the seventh inning on a South Central Conference high school baseball contest with Chariton earlier this summer. 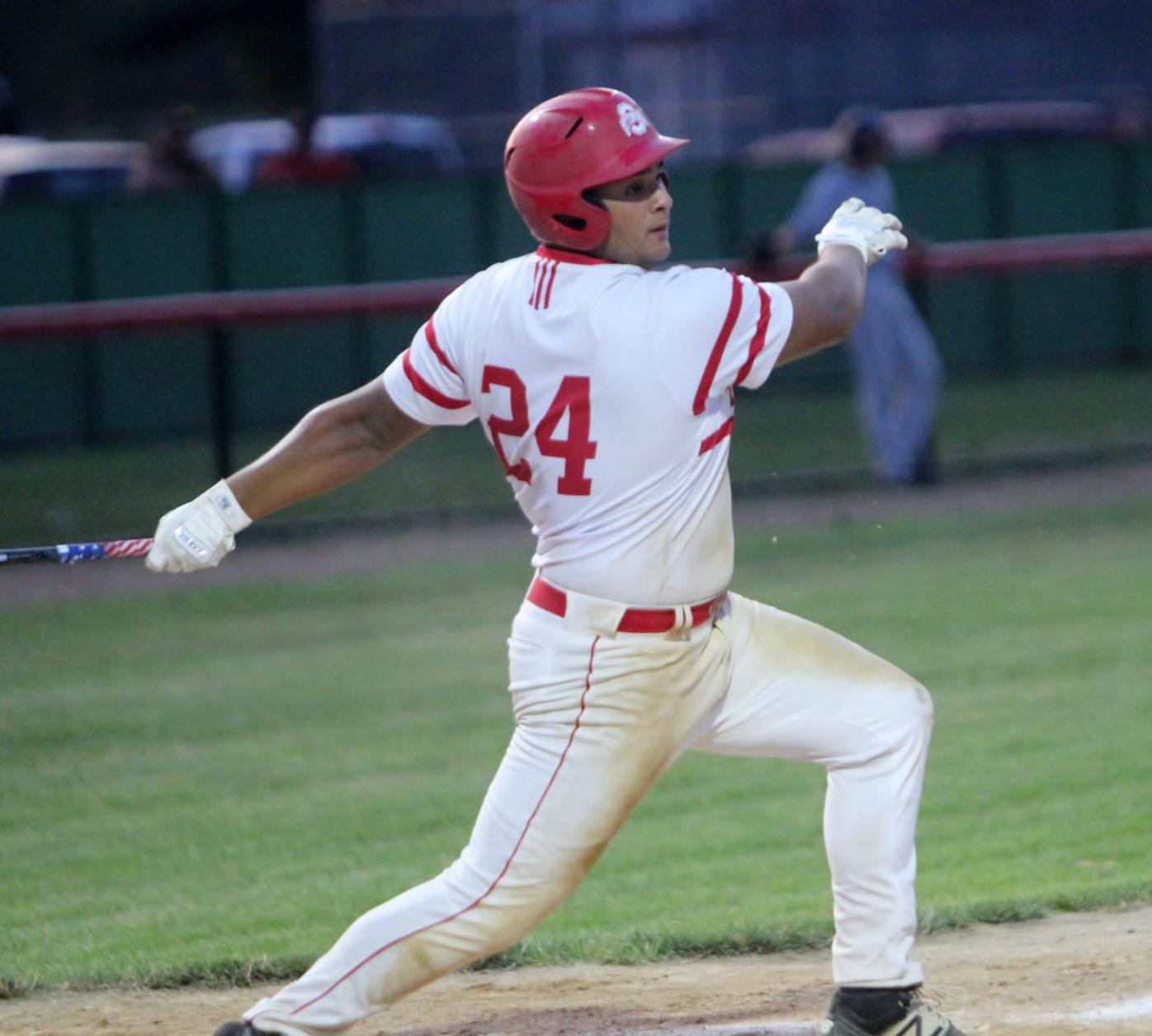 Jesus Jaime turns on a baseball at the plate looking for a hit for the Ottumwa Bulldogs against Waukee at Legion Memorial Field back on July 10. 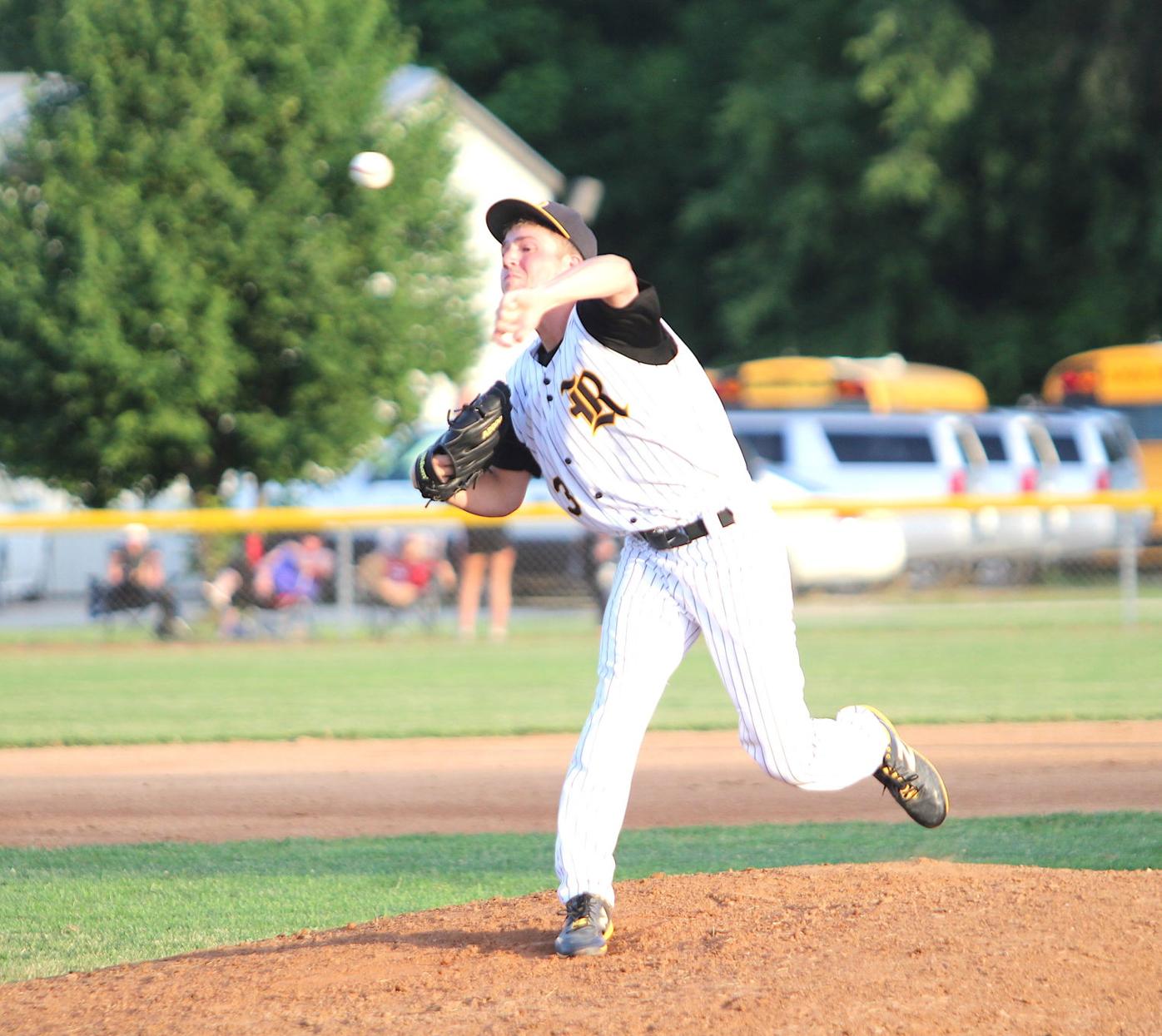 Centerville’s Brady Kauzlarich, right, is greeted by teammates after scoring the tying run in the seventh inning on a South Central Conference high school baseball contest with Chariton earlier this summer.

Jesus Jaime turns on a baseball at the plate looking for a hit for the Ottumwa Bulldogs against Waukee at Legion Memorial Field back on July 10.

OTTUMWA — Even in season-ending defeat, both Brady Kauzlarich and Rick Scott said the same thing when describing the traits of their respective teams.

“We do not give up. We don’t do that. We fight to the very last out,” said Kauzlarich, a junior all-state outfielder and pitcher at Centerville. “We’re a fighting team and we fight until the very last out. Whether that’s the first inning or the last inning, once we start fighting we don’t stop.

“It wasn’t always easy, but I knew my team was going to stick together and battle together every single night,” said Scott, the head coach of the Cardinal Comets. “I tell the players all the time not to worry about the other team. Let’s just go out there and worry about playing our game.”

That spirit to fight until the very last out carried both Centerville and Cardinal all the way to the substate finals this past summer. It took a pair of state champions, Norwalk and Van Meter, to keep the two schools from sending a sea of red to Principal Park in Des Moines.

Kauzlarich may have cemented his spot as the 2020 All-Courier baseball player of the year as much for what it meant for him to not be on the field this season. Trailing 2-1 in the fifth inning of the substate final against Norwalk, Kauzlarich hustled to turn what for most players would have been a routine ground out into a close play at first.

In doing so, Kauzlarich hurt his hamstring. That injury would hamper the junior on the mound, allowing Norwalk to add two runs in the bottom of the fifth, and would ultimately keep Kauzlarich on the bench watching as Hunter Gottman struck out batting for the junior lead-off hitter needing to reach base in the seventh to extend Centerville’s season and bring the tying run to the plate.

“It’s hard. It really is, but I’m a fighter,” Kauzlarich said. “I’m going to come back next year. This team is going to get my best every single day. If it’s not enough, it’s not enough. Hopefully, it will be more than enough for us to get back to state next year.”

Scott, meanwhile, cemented his place at the 2020 All-Courier baseball coach of the year after leading Cardinal to nine straight wins including a district championship. Like the Big Reds, the Comets hope coming up one win short of state will add fuel to the fire of making a run to Des Moines next summer with 14 of Cardinal’s 19 varsity players returning in 2021.

“You don’t just start making a run to state at the start of the next season. The work has to be done throughout the offseason and a willingness to get better every single day,” Scott said. “It takes everybody being on board. That’s what we saw this season. There were so many fans that came up to Oskaloosa for the substate final. We saw a lot of red shirts out at every postseason game. It takes your entire team from the players, the coaches to everyone in the community.

“I can see, moving forward, that Cardinal is headed in the right direction.”

The Big Reds and Comets are just part of the story for what should be a promising summer of 2021 for Courier-area baseball. Eight of the 12 players selected are juniors representing six of the 12 area schools, including the South Central Conference champion Eddyville-Blakesburg-Fremont Rockets and the Southeast Iowa Superconference north division champion Pekin Panthers.

Perhaps the most overlooked member of the All-Courier team, Arbogast was not selected to either an all-state or all-district team, nor was the senior named a first-team all-conference honoree despite a team-best four wins on the mound. Arbogast made four starts, pitched in six games and tossed 24 total innings saving some his best work for the end of the season pitching a complete-game shutout in the postseason against Davis County. That 1-0 win over the Mustangs was followed by 4 2/3 scoreless innings of relief in the district title game against SCC champion EBF, earning the win with 11 strikeouts including eight straight while the Comets were turning a 2-0 deficit into a 3-2 lead.

No team in Class 3A returned more talent from a state tournament qualifier in 2020 than the Big Reds, including the deepest rotation of pitchers with experience on the hill in 2019. In that sea of hurlers, it was Mathews that emerged as Centerville’s winningest pitcher this summer going 5-1 in seven pitching appearances while striking out 25 batters and posting a staff-low 2.36 ERA.

Thiravong set the tone for an all-conference year on the mound for the Blue Demons, outdueling EBF’s Jared McCrea on opening night as Albia knocked off the eventual South Central Conference champions. Thiravong led the SCC with 38 strikeouts and was second in the conference in wins (4) and ERA (1.62). Albia won four of the six games Thiravong started this year while going just 2-7 in games Thiravong did not pitch in.

Juhl is actually continuing a run of success behind the plate for the Panthers, following Quinn Ledger as the second straight Pekin catcher to earn All-Courier and all-district honors. Juhl, who was standing on deck last season hoping for a chance to complete an amazing seventh-inning comeback at the 2019 state baseball tournament against eventual 1A state champion Mason City Newman, had an incredible year of his own stepping into the role as Pekin’s top catcher starting all 10 games for the SEISC north champions while leading the Panthers at the plate with 16 hits and a .459 hitting percentage.

One last successful season in a Big Red uniform for Oden, who has been a major force in helping Centerville qualify for three consecutive state tournaments including the 2018 run to the Class 2A state championship. In his final season, Oden racked up several more postseason accolades from third-team all-state honors to all-district accolades at third base while leading Centerville with eight doubles and 32 total bases.

Wood enjoyed another steady season at shortstop for the Bulldogs, starting and playing in all 22 games for Ottumwa with some time spent on the mound. Wood was once again an all-district performer in Class 4A, as he improved his batting averaged from .321 to .358 this season with two home runs and 12 RBIs, and led the Bulldogs by scoring 24 runs, just four shy of the 28 runs Wood scored last season playing in 14 more games.

Mohr flirted with one of the state’s best batting averages and, at one point, had the second-best on-base percentage in all of Iowa High School baseball. The all-state shortstop wound up with a .522 batting average and a .676 on-base percentage. Besides collecting a team-leading 24 hits, including nine doubles, Mohr drew 15 walks and was hit seven times by pitches. The savvy infielder helped Sigourney rally from a 1-3 start to finish 10-6 with plenty of momentum and returning talent returning for the Savages in 2021.

Jaime had a breakout season for the Bulldogs after playing limited time as a sophomore. This season, Jaime started all 22 games and hammered a team-best five home runs, over twice as many as the two he hit as a sophomore, and improved his batting average (.380 up from .372) while matching his RBI total with 31, the most on the Bulldogs in the shortened season.

The All-Courier captain had another successful season for the Big Reds both in the field, at the plate and on the mound. Kauzlarich’s fourth year of varsity baseball finished with a team-high marks in total hits (25), runs scored (23), batting average (.455), on-base percentage (.559), pitching starts (7) and pitching appearances (8). Before the season, Kauzlarich announced his verbal commitment to play baseball at Southeastern Community College and made his verbal commitment to fans of the Big Reds to do everything he can to help Centerville qualify next season for a fourth state tournament in five years.

Had it not been for the coronavirus pandemic, Walker might have stepped on the diamond this summer as the fastest athlete in Class 2A as a favorite to win state titles in both the 100 and 200 meter dashes. Walker instead dashed his way around the bases while setting the tone at the top of the batting order for the Rockets finishing second in the entire state with 33 stolen bases in 34 attempts and leading EBF with scoring 24 runs.

Because of the overall depth of pitching this season in the area, and because he was named both an all-district and all-state outfielder, the Rocket junior moves from the mound after being named one of the three All-Courier pitchers in 2019. McCrea went 3-1 in a truncated season, making a team-best five pitching starts and eight overall appearances, but was also very just as instrumental in helping EBF win the South Central Conference title at the plate with a team-high 28 hits and 18 runs driven in.

Besides being the younger brother of San Francisco Giants’ draft selection, Winn might have set the tone for his successful senior season on the diamond with the final swing of his junior year. That bases-clearing double that brought the Panthers within 8-7 of eventual state champion Mason City Newman in the 2019 Class 1A state tournament set the table for more big swings and big plays this season as Winn was named Southeast Iowa Superconference North Division Player of the Year, collecting a team-high 17 RBIs, 16 runs scored, a .591 on-base percentage, a pair of pitching wins and all four home runs for the Panthers including three in a conference-clinching extra-inning win over Mediapolis back on July 2.

COACH OF THE YEAR

Scott has not only guided the Comets to three consecutive winning seasons but has truly instilled a sense that the small-school program from Wapello County can win some pretty big games. After a 1-3 start to the season, the Comets got on a roll that nearly carried them to the state tournament with nine straight victories including a 6-2 conference road win at previously-unbeaten Central Lee and a memorable 6-2 win at EBF as the Comets erased a two-run deficit to claim the Class 2A, District 11 championship.

Player of the year — Kauzlarich

Coach of the year — Rick Scott