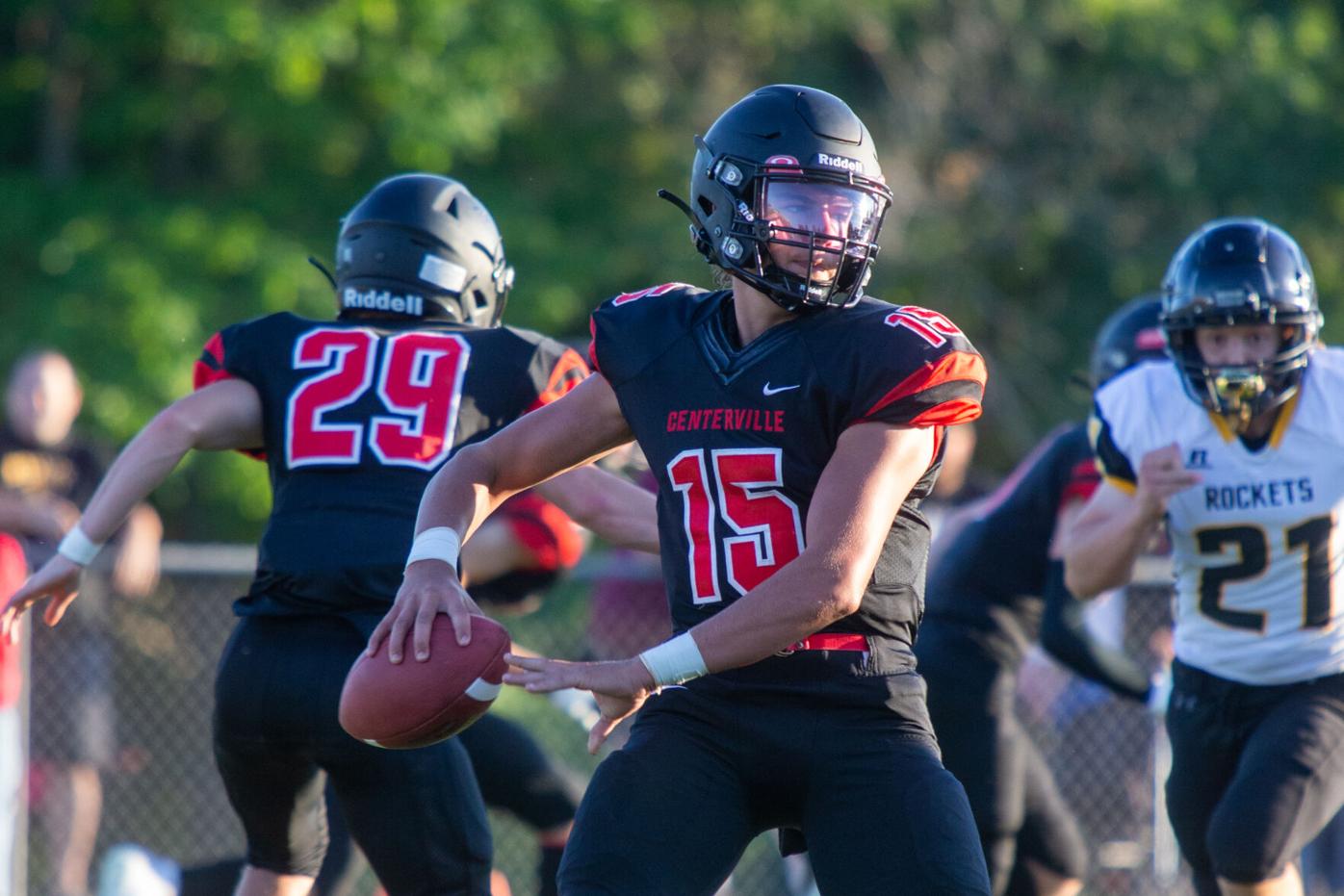 Centerville’s Sawyer Wardlow (15) drops back to pass during a pre-season scrimmage with Eddyville-Blakesburg-Fremont, Friday, Aug. 21. 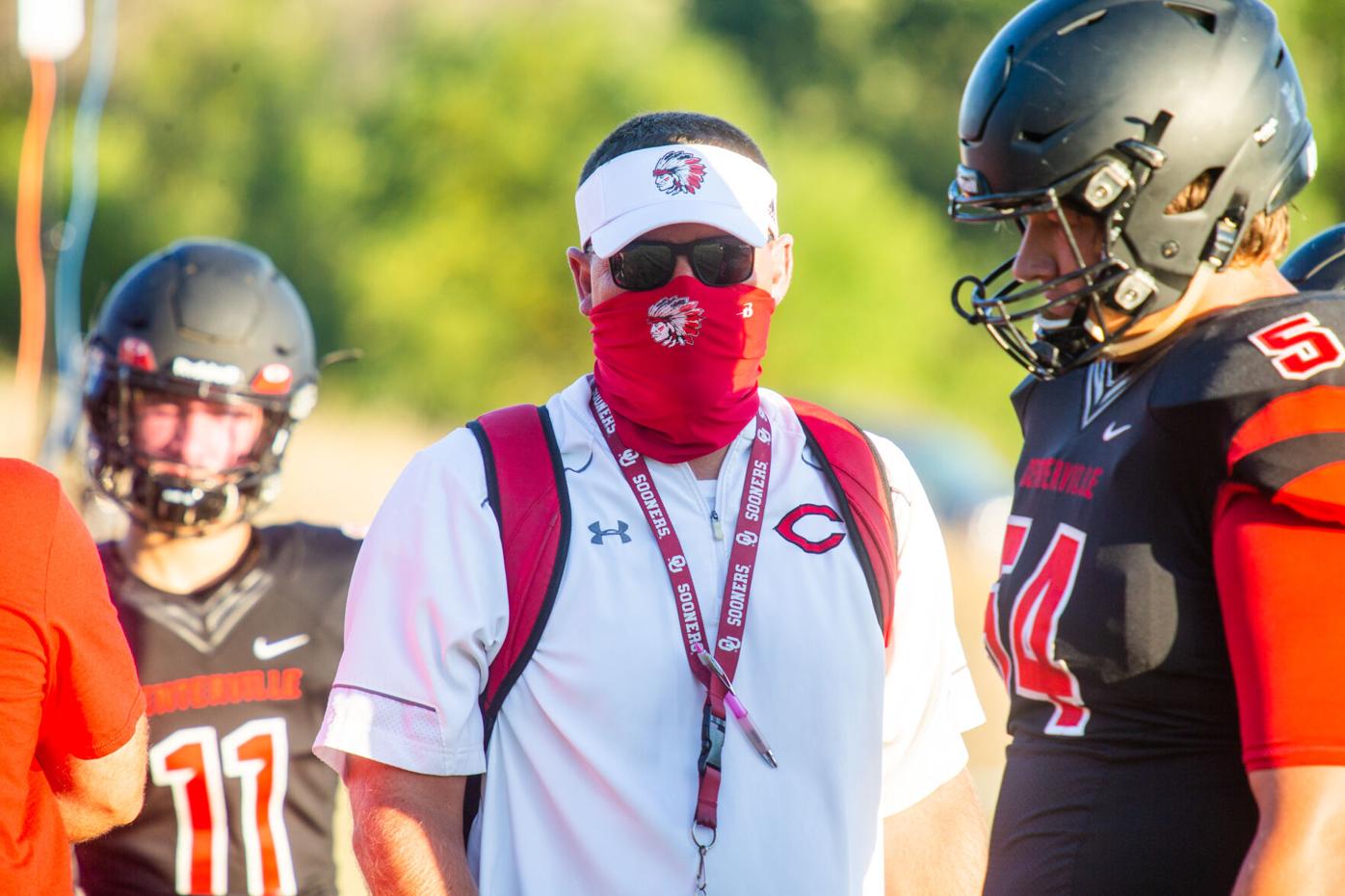 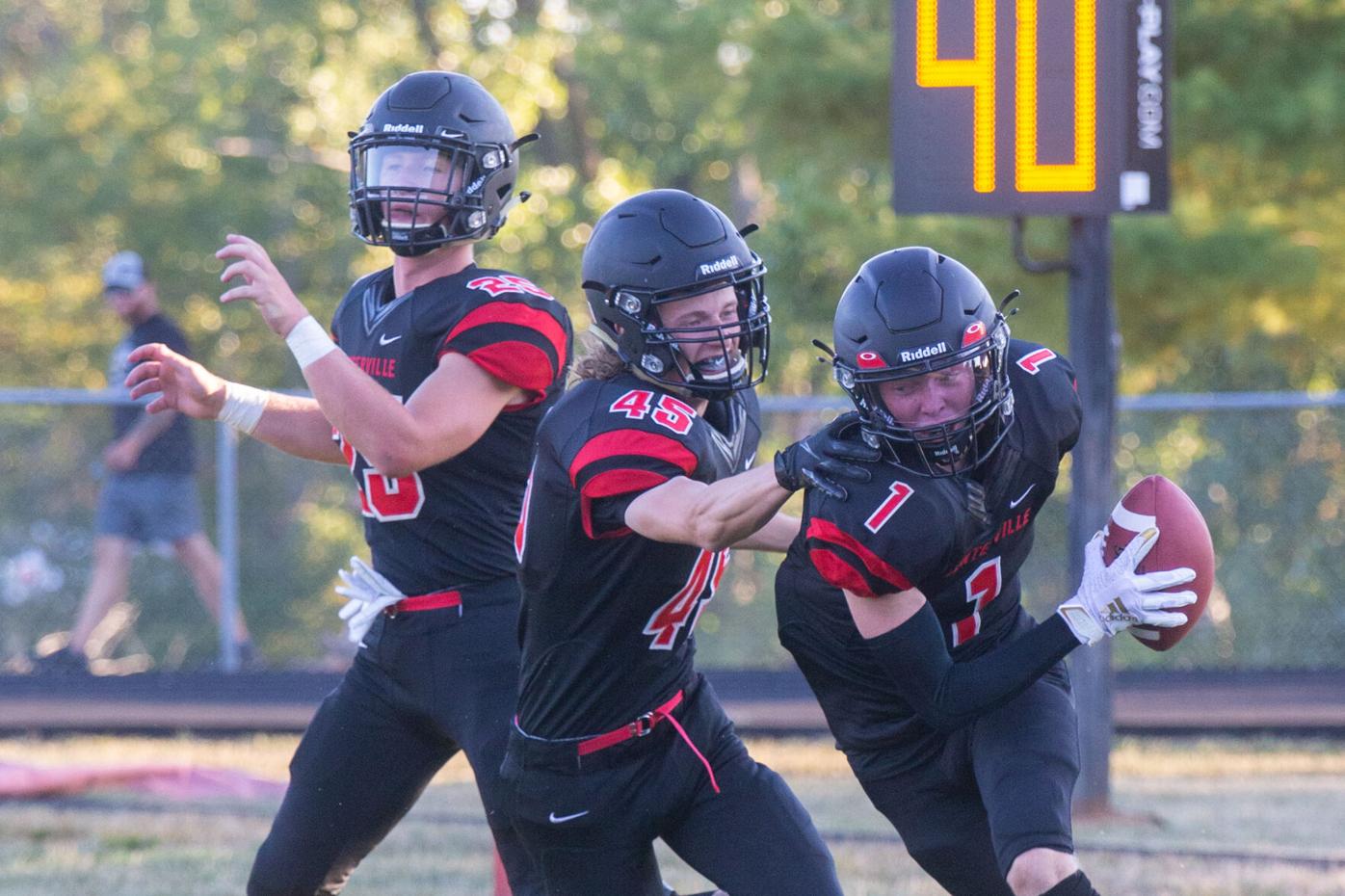 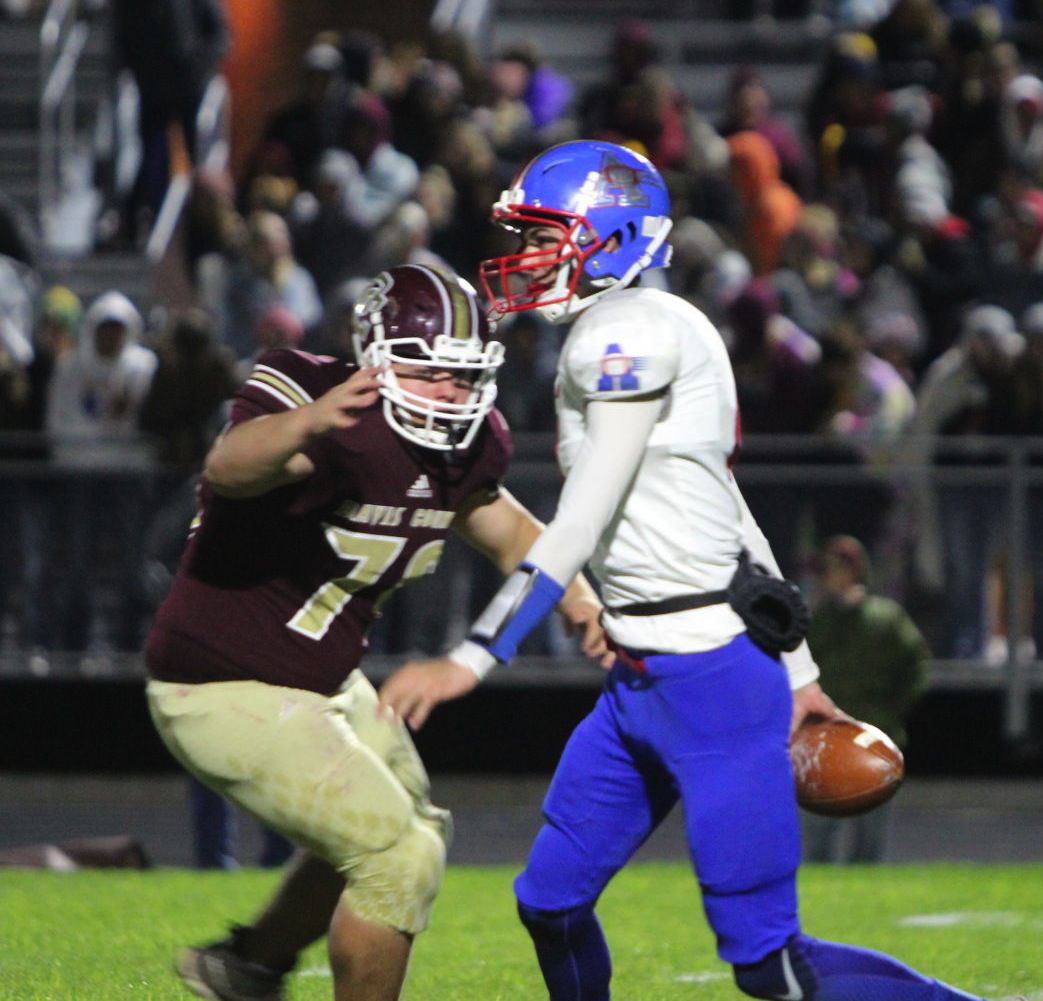 Centerville’s Sawyer Wardlow (15) drops back to pass during a pre-season scrimmage with Eddyville-Blakesburg-Fremont, Friday, Aug. 21.

CENTERVILLE — The Centerville Big Reds are ushering in a new quarterback era this year, while the Albia Blue Demons are looking toward experience to lift them into a win-filled season.

In Centerville, junior Sawyer Wardlow will be full-time under center for the Big Reds, after throwing 17 passes last year.

In Albia, senior Blake Chance is looking to capitalize after throwing 2,500 yards last season, but being outscored by an average of nearly 32 points per game last year.

COVID-19 has thrown a curve into the football season, with schedules changed as games are lessened and playoffs are suddenly expanded. However, wins and losses will still matter even though every team now gets a crack at the post-season.

Albia looks to rebound, says fourth-year head coach Justin Huber. His Blue Demons put up good stats through the airlift year, with both a 2,000-plus yard passer in Chance and a 1,000-yard receiver in Blake Stewart — both who return this season.

But the team struggled to get the run game going, with the team averaging 2.5 yards per carry over 132 rushes last year. Their lone win, a 49-18 triumph, came over Central Lee.

The Blue Demons were outscored 484-199 last year, adding to their troubles that led to a 1-8 year. In trying to combat that, they do so losing some of the team’s defensive stars — like Luke Bossard, an all-state corner in his senior year.

“As explosive as our offense has the potential to be, we will rely on defense to make great strides from last year,” Huber said. “Replacing Luke Bossard from last year will be a tough task, but we will be looking at Nick Heffron and Liam Winfield to leader our defensive charge this year.

“Both have made tremendous gains in the COVID offseason and will be looked at as leaders for this year’s defense.”

Head coach Matt Kovacevich said his team is thankful for the chance to play this year, as they look to install junior quarterback Sawyer Wardlow into a more permanent role.

He’ll take over the reins of the offense from graduated quarterback Quinton Koestner. Wardlow brings some varsity experience from last year, and has two returning starting wide receivers to throw to in Merrick Mathews and Kellen Johnson, both seniors this year.

“We have several returning players that have varsity experience and look forward to having a successful and healthy season,” Kovacevich said.

The PCM Mustangs lost 13 players off their 8-3 team from a year ago, though it was underclassmen who largely carried the offense. PCM returns Sage Burns and August Stock, who combined to throw most of the team’s 1,251 passing yards.

The Mustangs return a 1,000-yard rusher in now-junior Aiden Anderson. Top receiver Jacob VanWinkle remains in the lineup for his senior season, after catching 21 passes for 447 yards and five touchdowns his junior year.

On defense, though, PCM did lose some impactful seniors, with players representing a third of the team’s total tackles graduating after last season. That includes Iowa State recruit Seth Greiner, who graduated as the team’s second top tackler in terms of total numbers, and the team leader for sacks and tackles for loss.

The Chariton Chargers lost 10 all-district players to graduation, and bring a younger and more inexperienced roster to the gridiron.

The Chargers went 5-4 last year, and look to be entering a rebuilding year. Just a handful of players are returning that saw some varsity time. Emmit Evans, a junior, ran the ball some and started every game at defensive back. Sophomore Jayden Allen-Winston will line up as running back and linebacker, after starting the latter position a couple of games last season.

Gone, though, are many. Including starting quarterback Graden Arnold, who was a two-year starter that was 60-for-1,232 yards last year with 15 touchdowns. Chariton will look to Aidan Mundt, a sophomore who played half a game last season before breaking his leg.

He’ll line up behind a brand new offensive line, as every starting lineman from last season graduated.

The Clarke Indians, who went 3-6 last year, will have a new man on the headset. Previous head coach Duane Matthess left for a job at Nodaway Valley. Jerrod Gaskill will take over as the head coach this season.

Highlighting returns on offense for the team is Chris Carson, a senior who was the team’s second-leading rusher last year with 88 carries for 643 yards and seven touchdowns.

The Saydel Eagles went winless last season, and the bad news doesn’t stop there. The team had just 919 combined offensive yards last year. The team loses all five players who threw passes, and six players who ran the ball including the team’s top rusher, Garrett Shinn.