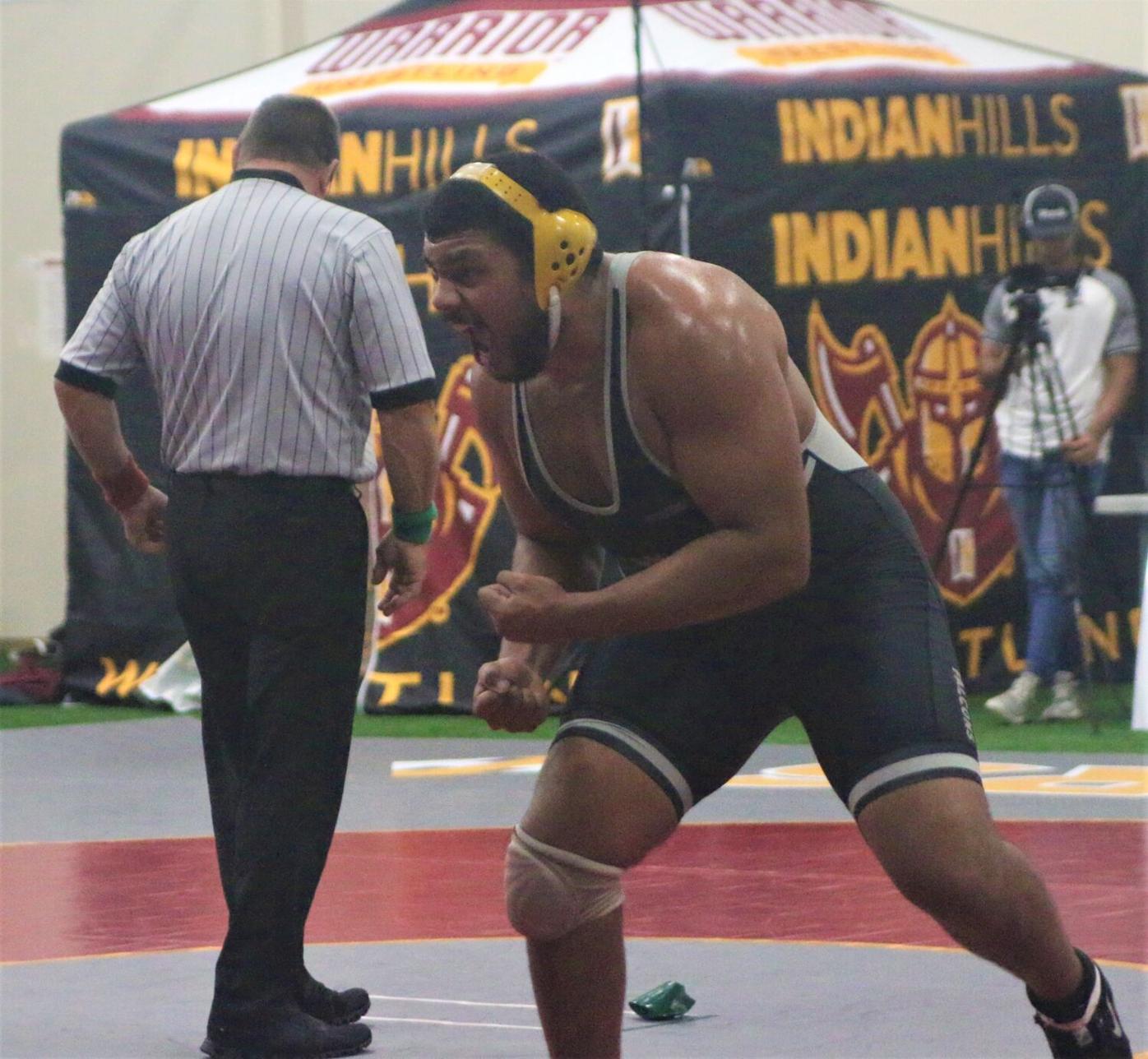 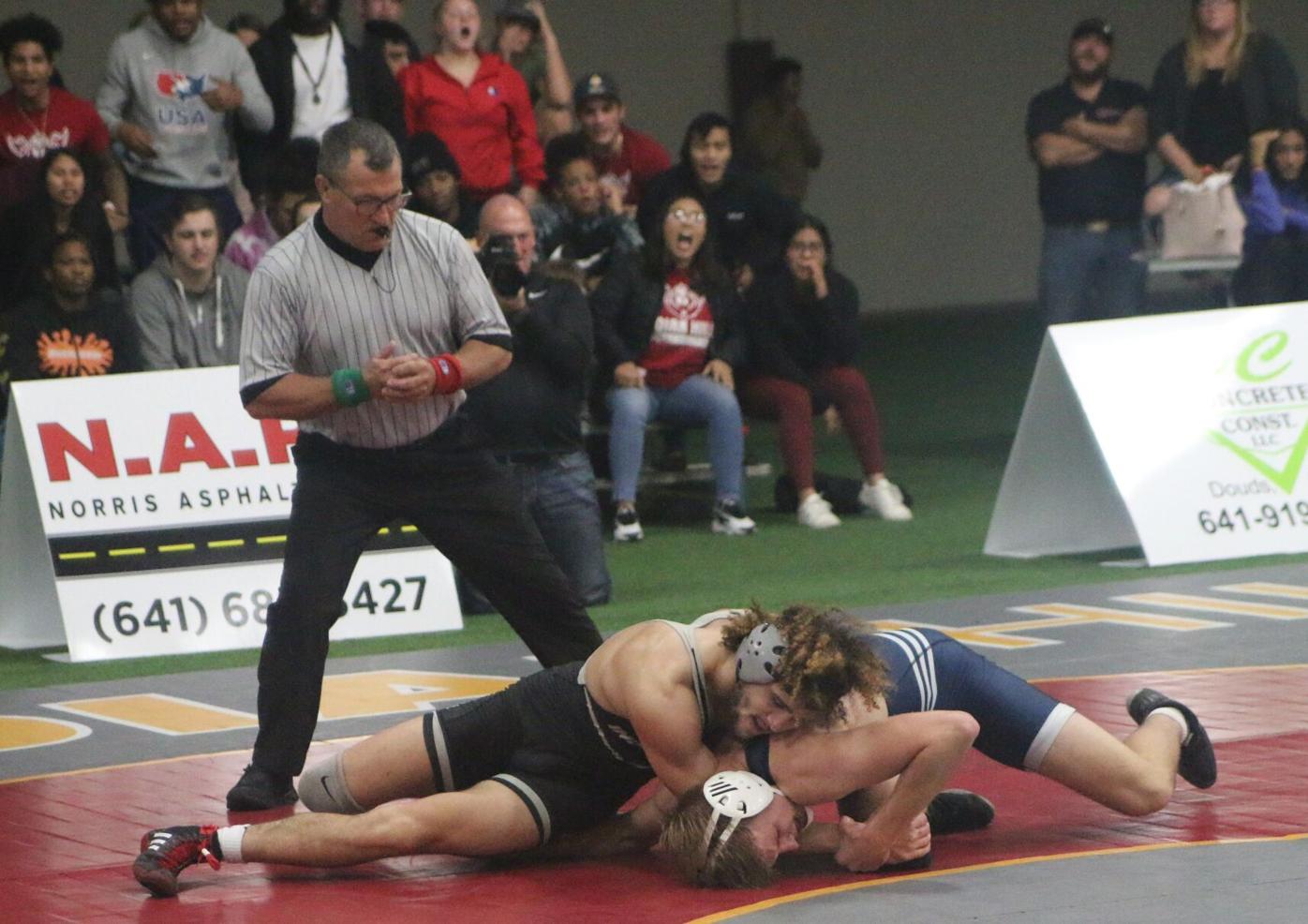 Indian Hills sophomore Cameron Nesbitt works his way to a 7-6 win over Iowa Central freshman Kody Cook on Wednesday night as the fans react late in the third-period of the 165-pound match at the Multipurpose Center on IHCC's Centerville campus.

Indian Hills sophomore Cameron Nesbitt works his way to a 7-6 win over Iowa Central freshman Kody Cook on Wednesday night as the fans react late in the third-period of the 165-pound match at the Multipurpose Center on IHCC's Centerville campus.

CENTERVILLE — One month ago, Caleb Collins wasn't sure he wanted to continue wrestling.

On Wednesday night, Collins not only wrestled, but won the final match of the night in a home-opening Iowa Community College Athletic Conference dual win for fifth-ranked Indian Hills. Collins wrapped up a 27-9 win over No. 10 Iowa Central for the Warrior men, outwrestling Triton freshman Kade Campbell to clinch an 8-2 win in the heavyweight finale at the Multipurpose Center on IHCC's Centerville campus.

Collins let out a celebratory cheer after having his hand raised following the win in front of a full crowd eager to see the Warrior men in action at home for the first time in the program's second second of competition. It was quite a different reaction one month earlier than the one Collins had when he came to head coach Cole Spree's office.

"One month ago he came to my office in tears," Spree said of Collins. "He had a tough season last year. He went through some health things earlier this year. To come back with maybe a week's worth of practice in him and wrestle like he did was one of the performances of the night for us.

"I'm super ecstatic for him. I just love seeing him have success."

In typical heavyweight wrestling, Collins won a match he nearly lost by fall seconds after almost securing his own fall in the second period. After scoring the first takedown to snap a scoreless tie, Collins found himself being reversed in a blink as Campbell looked to secure what truly would have been a sudden fall in the battle of the big men.

"I thought in that moment, there goes all my hard work," Collins said. "I just had to stay focused, clear-minded and had to keep pushing through it."

That mindset allowed Collins to get off his shoulders and turn the match back in his favor. Collins would not be return to his back for the rest of the match, instead dominating the final period scoring the final four points while riding out Thompson for IHCC's third decision in the final three matches.

"I went through a lot last year training and training. I just didn't think I'd see the results," Collins said. "I tried to come out with the mindset that I was going to win. My performance reflected that."

The first home dual of the season for the Warriors didn't get off to a glorious start. Lane Cowell scored a dramatic 9-7 upset in overtime against third-ranked IHCC sophomore Chris Busutil in the 125-pound opener, giving the Tritons a somewhat surprising 3-0 lead over the Warriors.

"I think being here in front of so many home fans might have shocked them," Spree said. "We just have to learn how to handle that, but it's good. I'd rather the guys learn here tonight than in March at the national tournament."

Top-ranked returning All-American Caleb Meekins immediately turned things around for the Warriors, pinning Hayden Halter in just 42 seconds at 133 pounds putting IHCC on top to stay. Seventh-ranked Victor Guzman scored perhaps the most impressive win of the night in the only battle of ranked wrestlers, dominating fifth-ranked Aidan Harris 22-6 with eight takedowns including four in the final period to secure a tech fall with 20 seconds left.

"That might have been the only other performance that was better than Caleb's (Collins)," Spree said. "Whenever you score a tech fall against a ranked wrestler, it's a big deal."

Jacob Ramirez added a 13-4 major decision in his debut for the Warriors at 149 pounds. Cameron Nesbitt, IHCC's seventh-ranked sophomore at 165 pounds, scored the most dramatic win for the home squad on Wednesday rallying from a 6-3 deficit in the final period to earn a 7-6 decision over Iowa Central freshman Kody Cook as Nesbitt worked his way to securing the decisive takedown with less than 30 seconds left in the match.

Top-ranked returning All-American Deron Pulliam won 3-2 in a tough 184-pound match with Aiden Carr, who played most defense preventing Pulliam from being able to score. Khris Walton, ranked sixth for the Warriors, secured the dual winning at 197 pounds 8-1 over Trevion Sample.

"We've got things to work on. There's going to be a learning curve," Spree said. "For me, it's not so much about the result. It's about the performance. We've got individuals that have another level to them and we've got to go find that with more opportunities and more exposure out there."

Indian Hills (1-0) will host Ellsworth next Wednesday night in an ICCAC dual starting at 7 p.m.

"It's early. It's hard to be too hard on the guys," Spree said. "The mission is March. It's not November. Our best wrestling has to happen at the end."