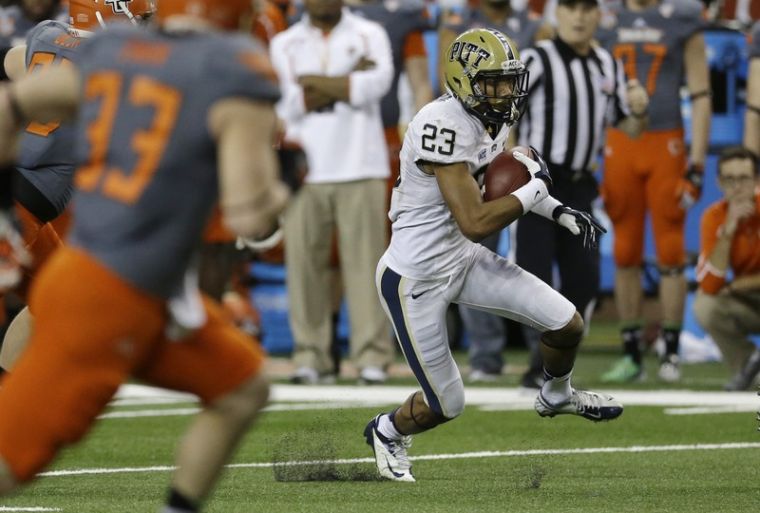 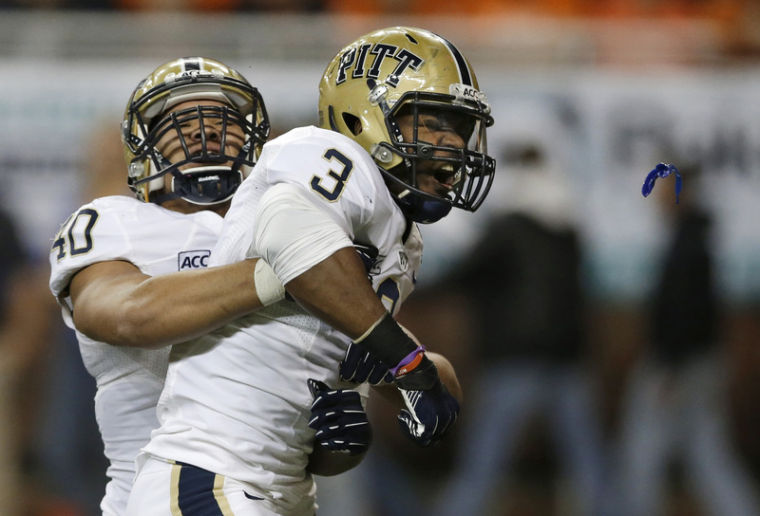 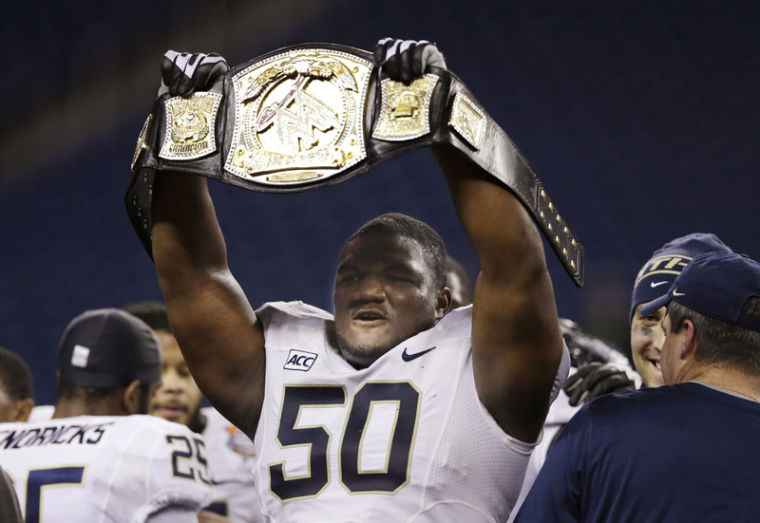 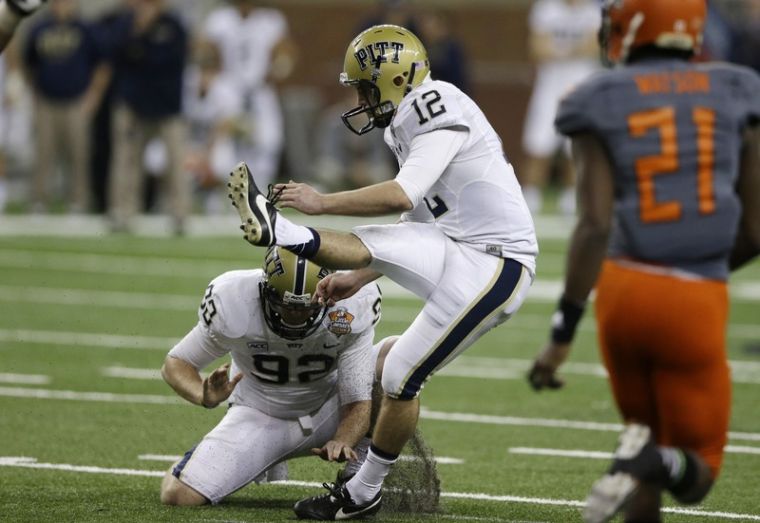 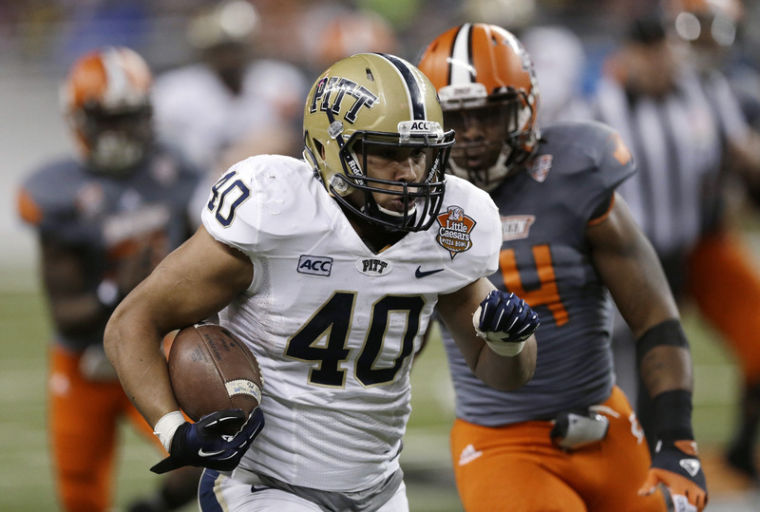 DETROIT (AP) — James Conner surpassed Tony Dorsett in the Pittsburgh record book — and that's not all.

The freshman running back also played a few snaps on the defensive line.

"Coach told me they wanted to unleash me on both sides of the ball, so I've been getting a lot of reps both ways," Conner said. "I was pretty tired by the end, but I wasn't going to tap out. They kept giving me the ball, so I just kept running."

Conner rushed for 229 yards, and fellow freshman Tyler Boyd caught eight passes for 173 yards in Pitt's 30-27 victory over Bowling Green on Thursday night in the Little Caesars Pizza Bowl. Conner broke Dorsett's school record for yards rushing in a bowl. Boyd set the receiving mark for the Panthers — and also scored on a punt return.

"They were without question the most physical team we faced all season," said Adam Scheier, Bowling Green's interim coach. "The offensive line was tough, the running back was obviously a bear to tackle and the whole defensive line was disruptive."

Scheier took over after Wake Forest hired coach Dave Clawson away from the Falcons. Scheier coached the bowl, but now Dino Babers takes over.

The 6-foot-2, 230-pound Conner rushed for 165 yards in the second half, helping Pitt overcome the loss of quarterback Tom Savage, who didn't play after halftime because of a rib injury. Conner and the Panthers drove 51 yards in seven plays late in the fourth quarter to set up a 39-yard kick by Blewitt, who had missed from the same distance earlier.

Then Conner was back on the field on defense, helping the Panthers protect the lead.

Boyd gave Pitt (7-6) a boost with his versatility as well.

"We obviously have some great young talent and that's why we are so confident about the future of this program," Pitt coach Paul Chryst said. "We think we're in great shape going forward."

One star the Panthers will have to replace is Aaron Donald, their All-American on the defensive line. Donald, a senior, helped thwart any last-ditch comeback with a sack deep in Bowling Green territory in the final minute.

Dorsett rushed for 202 yards in Pitt's win over Georgia in the Sugar Bowl on Jan. 1, 1977. The school's receiving record for a bowl came the next season, when Gordon Jones had 163 yards in a Gator Bowl win over Clemson.

Both marks fell Thursday, courtesy of Conner and Boyd.

Chad Voytik relieved Savage and put Pitt ahead 27-20 with a 5-yard touchdown run in the fourth quarter, but the Falcons — who upset Northern Illinois in Detroit in the Mid-American Conference title game earlier this month — tied it on Matt Johnson's 15-yard strike to Ryan Burbrink with 4:42 to play.

Boyd's 54-yard punt return gave the Panthers a 17-3 lead in the second quarter. Bowling Green (10-4) rallied, tying it at 17 on a 94-yard kickoff return by BooBoo Gates to start the second half.

Bowling Green appeared to catch a break on the kick return by Gates. A tussle behind the play drew a flag as Gates approached the goal line, but officials ruled that the touchdown stood, with offsetting penalties after the play.

The Little Caesars Pizza Bowl faces an uncertain future now that the Detroit Lions have decided to get in the bowl business and will host a game next season. If this game vanishes from the bowl lineup, the finale was entertaining.

Conner put Pitt ahead 7-3 with a 15-yard scoring run near the end of the first quarter. Boyd nearly lost his balance trying to stay inbounds at the end of his punt return, but he was able to reach the end zone.

"I knew I had to stay inbounds, because I'm not in the goal-line package," Boyd said. "So if I stepped out, I wouldn't get a chance to score."

The Falcons rallied thanks in part to an ill-timed loss of discipline by Donald, who picked up an unsportsmanlike conduct penalty with Bowling Green about to punt from its own territory. The Falcons ended up scoring on the drive when Alex Bayer took Johnson's short pass on fourth-and-1 and turned it into a 29-yard touchdown to make it 17-10.

MOUNT PLEASANT [mdash] Audrey A. Christy, 82, of Mt. Pleasant, died Monday, November 30, 2020 at Arbor Court in Mt. Pleasant. Funeral service will be held 10:00 am on Monday, December 7, 2020 at the Calvary Baptist Church in Mt. Pleasant. Burial will be in the Bloomfield IOOF Cemetery. Visit…