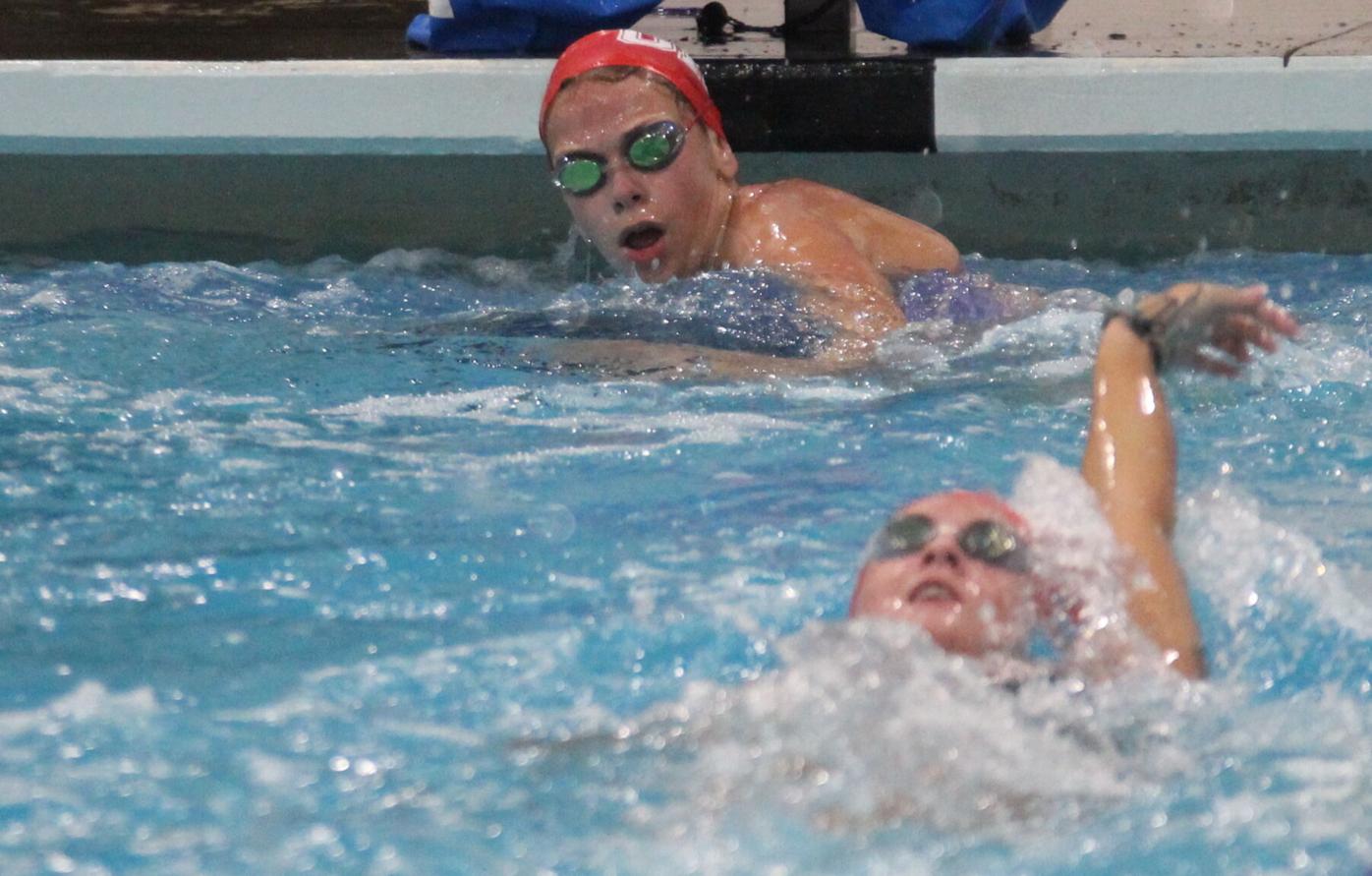 Drennan Lindberg prepares to make the turn and head back down the pool as Ottumwa teammate Libby Moses backstrokes to the far end of Mike McWilliams Pool on Monday during the opening day of a voluntary camp for Ottumwa swimmers. 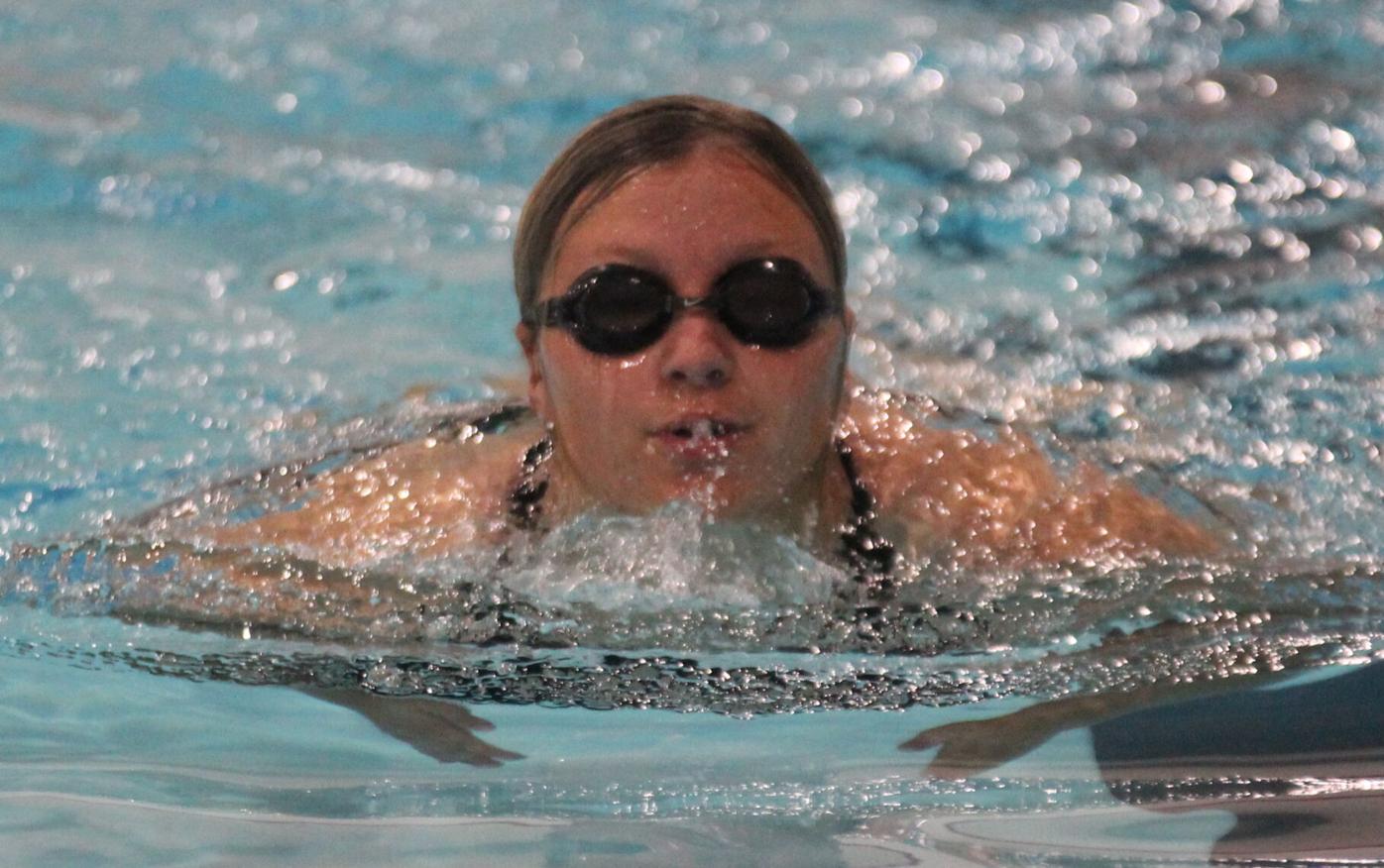 Chloe Bradley heads down the pool warming up on the opening day of the voluntary camp for Ottumwa swimmers at Mike McWilliams Pool on Monday.

Drennan Lindberg prepares to make the turn and head back down the pool as Ottumwa teammate Libby Moses backstrokes to the far end of Mike McWilliams Pool on Monday during the opening day of a voluntary camp for Ottumwa swimmers.

Chloe Bradley heads down the pool warming up on the opening day of the voluntary camp for Ottumwa swimmers at Mike McWilliams Pool on Monday.

OTTUMWA – The first day of practice is a full week away. There are over three weeks to go until the first meet of the season.

Leah Chelgren, however, already has her sights set on a special senior season of Ottumwa High School girls swimming. The two-time state qualifier is hoping to leave a lasting mark on the program by taking down a few schools and pool records this fall.

Chelgren was among several familiar faces that began the voluntary Ottumwa High School girls swimming camp, which runs at Mike McWilliams Pool this week. The camp will be held Tuesday, Wednesday and Thursday afternoons from 3:45-5:45 p.m.

"I think (assistant coach) Heather (Burgess) and I are excited to start the new swimming season," Ottumwa head girls swimming coach Heather Simplot said. "It's going to be great to welcome in some new people and welcome back some great returning swimmers. We're excited for this year. We're hoping for some great things. We're hoping to see to put our names up there on the swimming record board. We'd also like to qualify for state in some individual events."

Chelgren, Libby Moses and Mac Payne were back in the pool on Monday as OHS swimmers that were able to attend the voluntary camp this week. Other camps that are going on this week have limited the amount of potential swimmers that would have attended.

Of course, next week is when the season truly gets underway with the first day of practice on Monday, Aug. 9. From there, it's all systems go as seniors like Chelgren and Moses look to finish their high school swimming careers qualifying for state for a third straight year after making it in two relays as sophomores and all three relay races last fall as juniors.

"I'm just ready to be back. I'm excited for what's in store," Moses said. "It feels like we're a lot closer going into this year. COVID-19 really put a strain on all of us last year. This year, we feel closer as a team. You just walk into the pool now and feel comforted by everyone. It's going to be a really good year."

The voluntary camp wasn't just a chance for returning swimmers to get back in the pool. Chloe Bradley returned to the pool on Monday to take part in the first day of the camp with her sights set on being a part of the OHS girls swim team this season for the first time.

"I did a little bit of swimming last year to get my legs stronger, but this will be the first time in a couple of years I've swam a full season," Bradley said. "It's tiring getting back in there. I didn't remember how tired I used to be when I was swimming as a kid. I've swam competitively before, but I don't remember it being like this."

That's a testament to the work of swimmers like Chelgren, Moses, Payne, Drennan Lindberg and Hannah LaPoint all of whom were on hand on Monday to swim gearing up for what could be a special OHS swimming season. Several Ottumwa swimmers are hopeful they can do well in multiple strokes throughout the season.

Chelgren, who has her sights set on mastering several events this season, is coming back after suffering a back injury this summer that kept her out of the pool. The senior-to-be has been making up for lost time, swimming mornings and afternoons with her sights set on a lot more time in the water as the season gets underway.

"My plan this year is to swim two hours in the morning, two hours in the afternoon and about 90 minutes after that," Chelgren said. "That's about five-and-a-half hours in the pool. Hopefully, I can do it. If not, I'll have to adjust that a little bit, but that's the goal."

For Simplot, this figures to be a bit of an emotional season as the longtime head coach of the Ottumwa YMCA Hurricanes will say goodbye to many swimmers she's coached since they began in the sport. Chelgren has been coached by Simplot since she was 4-years-old, advancing to state for both OHS and the Hurricanes over the past decade.

"I feel like Heather's going to take it even harder than my mom is," Chelgren joked. "I've known her for so long. It's amazing to think that it's finally coming down to my last year swimming for her. Swimming is what I love to do, which is why I've done it for long. It's weird to think it's going to be a season of lasts, from my last first day of practice to my last first meet of the season, my last conference meet, my last regional meet and my last trip to state.

"It's going to be pretty emotional, but that's why I'm shooting for those records. I want it for my team and I want it for Heather. The hard work everyone has put into helping me get to this point can truly pay off."