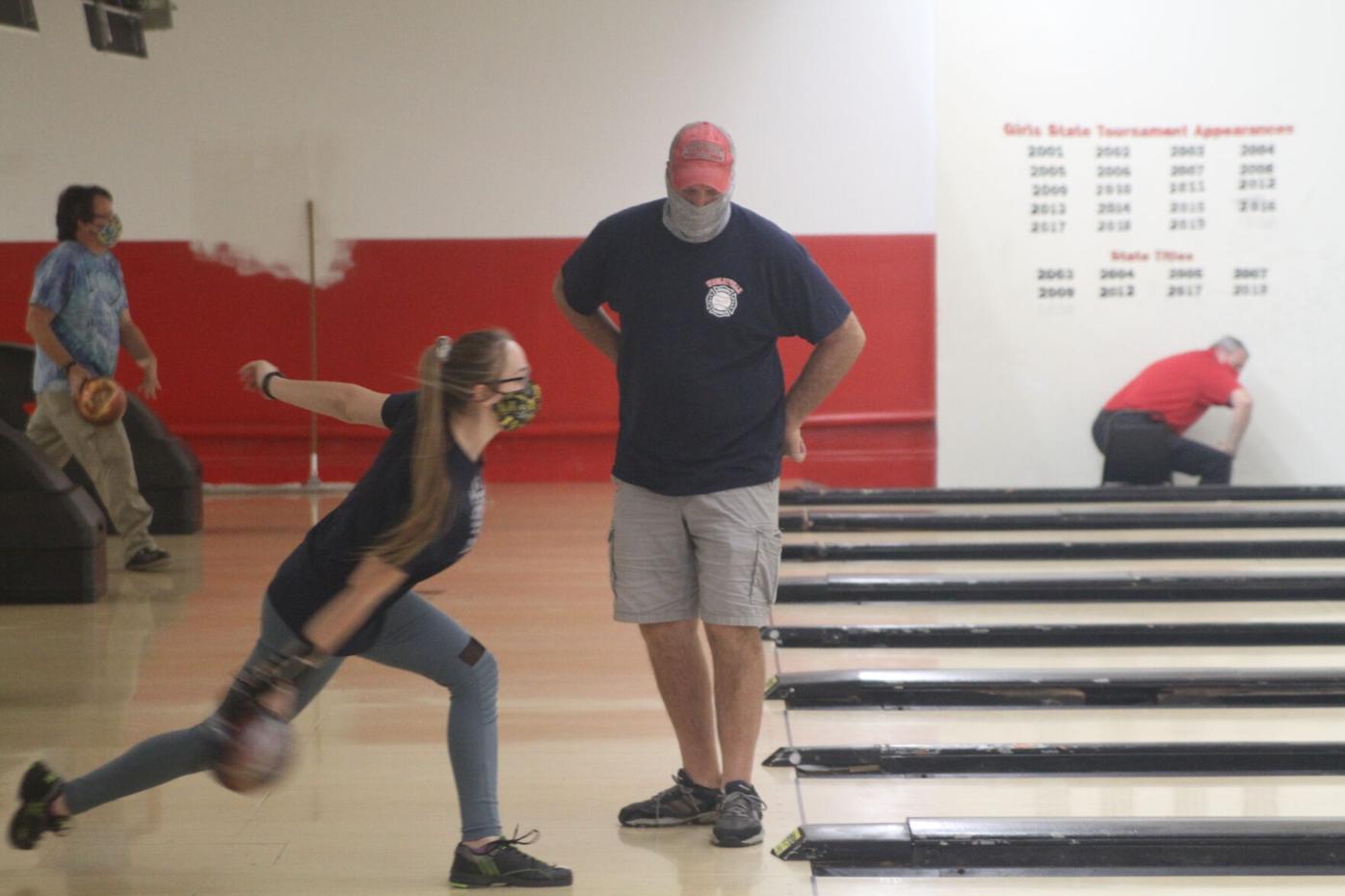 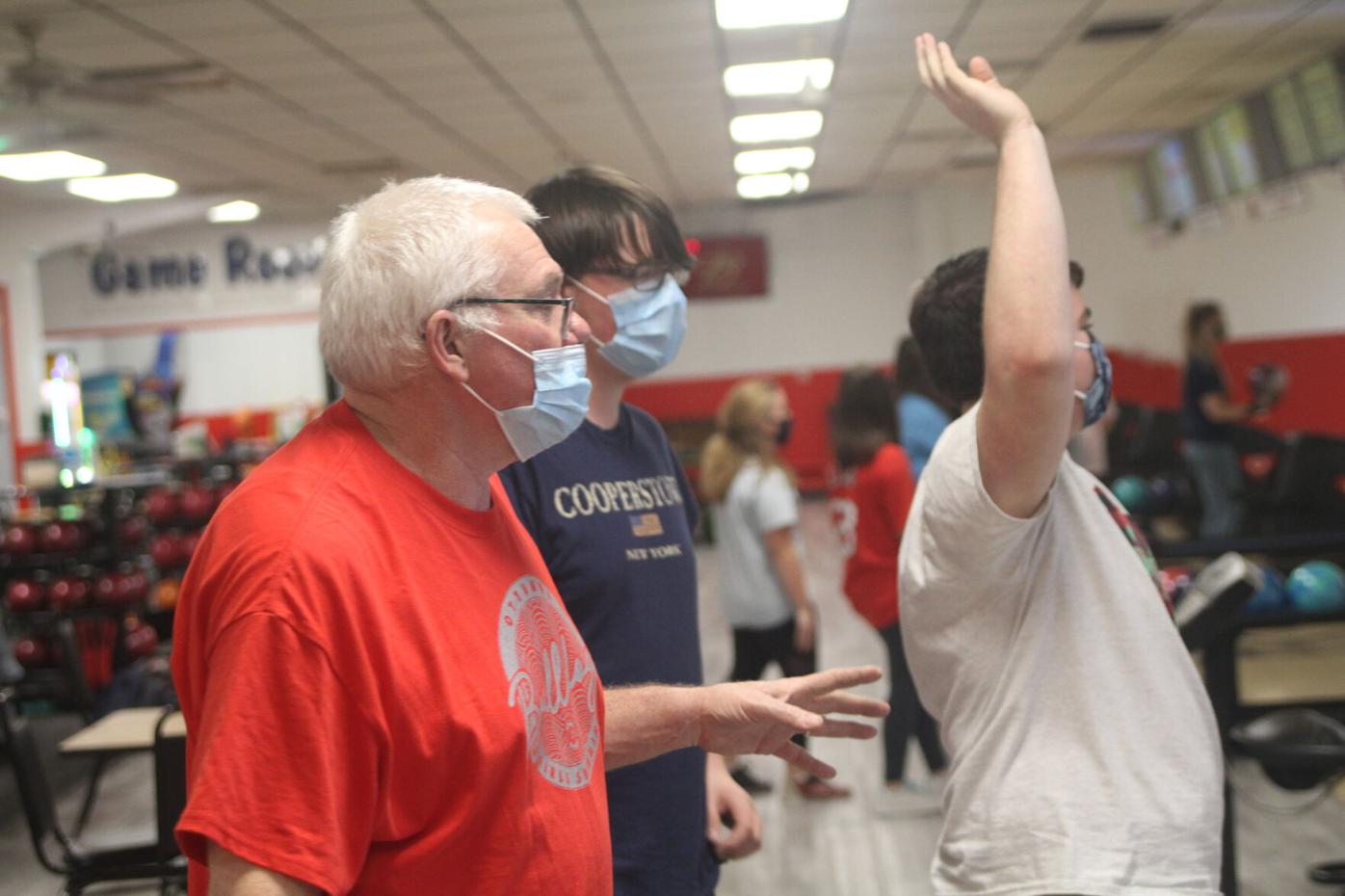 OTTUMWA — The last ball Zoe Seamans sent down the lane last year as an Ottumwa High School bowler came with tears in her eyes.

The first ball she rolled this year on the first day of practice for her senior season at OHS came with a mask on her face.

So much has changed in the world since Feb. 26, the day the Ottumwa girls clinched the program's sixth state bowling championship at Cadillac XBC in Waterloo. Evidence of that can be seen at an OHS bowling practice where all bowlers and coaches work towards the 2020-21 season spacing out along the lanes to maintain their social distance while wearing masks throughout the sessions.

"It's one of the things that is definitely different about this year," Seamans said. "I've never had to bowl with mask on. That's taken some getting used to."

The changes won't stop there. Ottumwa already has had to adjust its schedule with virtual learning on Nov. 24 postponing the scheduled season-opening meet at Champion Bowl with Davis County and Southeast Polk until Tuesday, Dec. 1.

When that opening meet happens, should it happen on Dec. 1, it will take place in a much different environment. No visiting fans are allowed at bowling meets this season with each Ottumwa bowler and coach allowed only two spectators for home meets.

Ottumwa will truly experience how different things will be this year with no fans cheering them on Dec. 10. The Bulldogs are scheduled to compete at Bowlerama in Des Moines against East High School in what, at this point, is currently scheduled to be the first road meet of the season.

"That's going to be a real adjustment," Ottumwa senior Randi O'Leary said. "Having fans to cheer us on really got us going. That's something we're going to have to deal with.

"We're so used to all the loud noises in the background," Seamans added. "It won't even be as loud at home. There won't be nearly as many people here as there would normally be."

The lack of fans is just one more adjustment for the Ottumwa girls who enter this season as the defending Class 3A state girls championship team with several key members of that team lost due to graduation. Jenny Goodman, Anna Wetrich and McKinna Haines were part of four great years that including three state championship wins and a third-place finish at state in 2019.

Those three seniors went out on top, graduating as the team leaders on the 2020 championship squad. Seamans, O'Leary and Liberty Welch remain along with junior Olivia Pilcher who joined O'Leary in making her state debut last season for the Bulldogs.

"To me, those seniors last year really held us together," O'Leary said. "It took a lot of positivity to make it to the finish line last season to win the state championship. You couldn't get down on yourself. You had to keep your chin up. We know going in that a lot of the girls on the team aren't going to be used to this."

Seamans talked about the younger bowlers that may be called upon to step in to fill the shoes of the talented seniors that made up the 2020 state championship team. The Evans Middle School bowling program and the youth bowling leagues at Champion Bowl have provided those bowlers a place to build on the successful fundamentals of the game, something Seamans has seen first hand.

"I went to a few of the middle school meets and tried to get them hyped up," Seamans said. "It really worked for Brooklyn (Welch). The others were a little more quiet, but I think Brooklyn is used to it, so she shouldn't have too much of a problem adjusting to playing on the high school team."

The Ottumwa boys, meanwhile, are focused on finally snagging the program's first Iowa High School Athletic Association state team championship. The title continues to elude the Bulldogs with last year being the closest, in terms of pins, that OHS has come to hoisting the first-place trophy falling 14 pins shy of Fort Dodge leaving Cadillac Lanes in third place.

"That's what it goes back to for us. Take care of your frame. If you get the most out of every ball and every frame every time you bowl, you'll get the best score possible and hopefully it will be enough."

Braydon Songer, Clayton Morris and Dylan Glick return for their senior seasons while juniors Reiley Freeman and Richard Garrett bring starting experience back to the Bulldog lineup. Will the Bulldogs will have to replace a talented senior group that included state placewinners Garraty Richmond, Jaxson Coble and Dawson Greene, Maher believes the talent is there for Ottumwa to not only make another run at a championship but finally push through and win the program's first state team title of any kind in over 50 years.

"We're only going to have one person on varsity that doesn't have any varsity experience. Everyone else has had experience bowling on this level," Maher said. "We're a fairly loaded team. This is their year to shine."