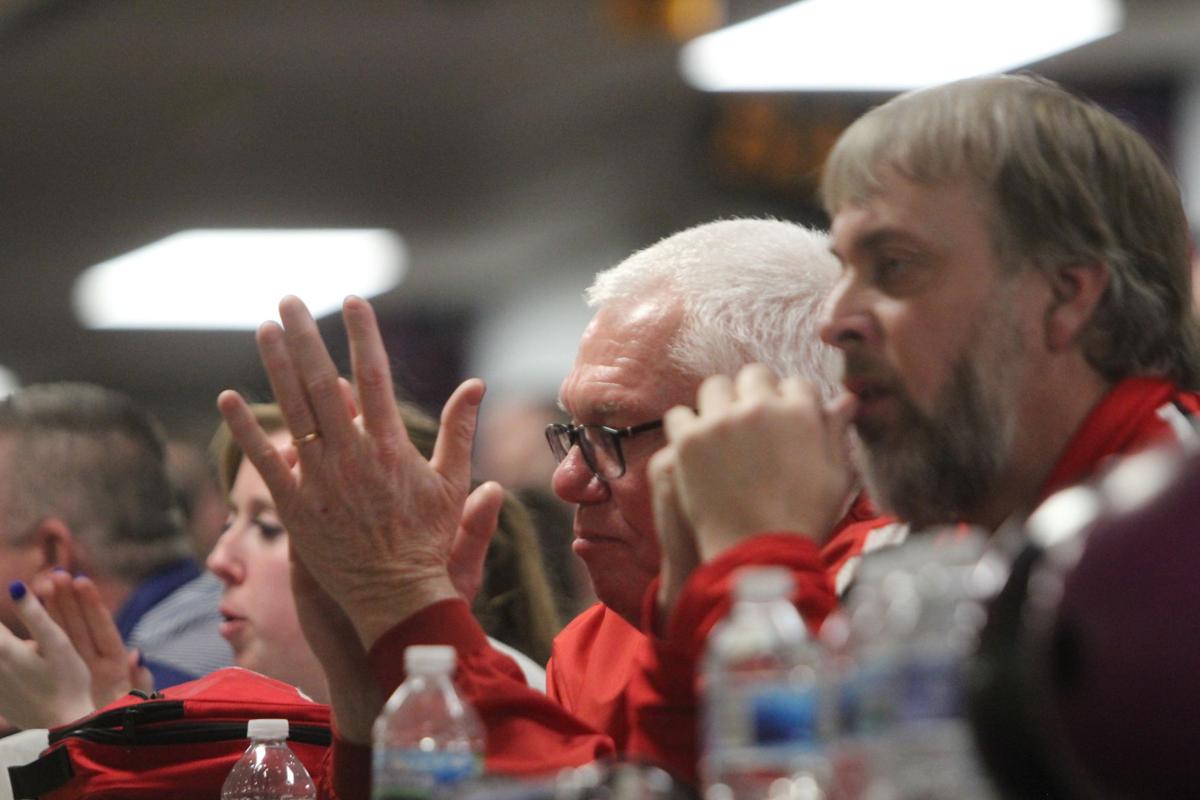 Ottumwa head boys bowling coach Tom Maher puts his hands together while sitting next to John Eddy (right) during the Class 2A boys high school state bowling tournament at Cadillac Lanes in Waterloo in February. 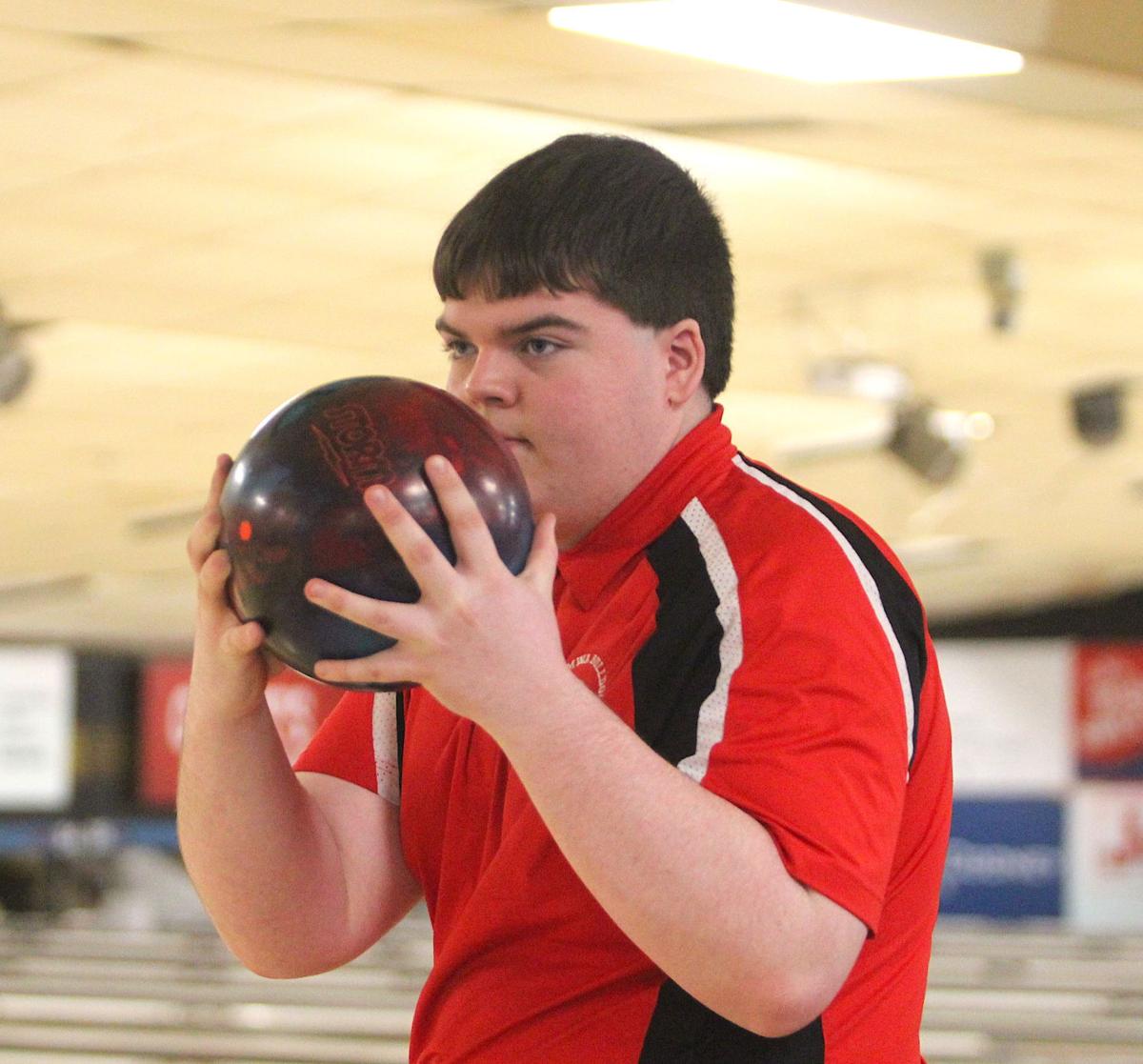 Ottumwa junior Braydon Songer focuses in before approaching the lane during the Class 2A boys state bowling tournament at Cadillac Lanes in Waterloo.

Ottumwa head boys bowling coach Tom Maher puts his hands together while sitting next to John Eddy (right) during the Class 2A boys high school state bowling tournament at Cadillac Lanes in Waterloo in February.

Ottumwa junior Braydon Songer focuses in before approaching the lane during the Class 2A boys state bowling tournament at Cadillac Lanes in Waterloo.

NOTE: This is the fourth story in a series about the Ottumwa High School bowling program

OTTUMWA – Susan Wetrich had bowled for fun before.

Being part of a bowling program, especially the winningest bowling program in the state? That wasn’t something Wetrich even considered when her daughter, Anna, joined the Ottumwa High School girls team four years ago.

“I was just looking for something to keep her busy during the winter months,” Wetrich said. “I knew basketball wasn’t going to be the direction she was going to go. Same for swimming. Early on, I just wanted her to keep busy.

“Gradually, she got more and more interested as she got older.”

Both Anna and Susan Wetrich were introduced to the citywide passion for the sport of bowling immediately. As a freshman, Anna would bowl on Ottumwa’s 2017 Class 2A state championship team, the fourth sanctioned title for the program and first championship since 2012.

It was an atmosphere unlike anything either Wetrich had experienced before as Ottumwa rallied from third place after individual play, erasing a 41-pin deficit in the baker rounds on an intense day at Plaza Lanes in February of 2017.

“I had no idea what was involved in it,” Wetrich said. “I just figured, like whenever I went out bowling, that you just went out there and bowled for fun.”

For the Ottumwa bowling program, the fun comes in winning. The Bulldogs have the most successful girls bowling team in the state with six state championships won in two separate classes and have qualified for every state tournament, sanctioned or unsanctioned, since the Iowa Bowling Federation first brought high school bowling back in 2000.

Add to that the nine state tournament appearances by the Ottumwa boys, tied for the most among Iowa high schools, and the bar is set very high for the program heading into the 2020s. The commitment to excellence, however, requires a commitment both from the bowlers and their parents.

“I didn’t know anything about all the equipment that’s required,” Susan Wetrich said. “Things like the condition on the lanes, all the mechanics that go into being successful. I’ve learned a lot over the past four years.”

It also costs a lot for Ottumwa bowlers to have the tools needed to contend year in and year out for state championships. Bowling shoes can run anywhere from just under $40 to nearly $200 depending on the quality, while bowling bags — some of which could double as a rolling suitcase — also can cost over $100.

Oh, don’t forget the most important piece of equipment every bowler needs, a ball. Bowling ball prices generally range from about $40 to more than $300, depending on the brand.

The cheapest balls go for $40-60, but those are likely not the balls that head down Cadillac Lanes in Waterloo during the state tournament. What some might not notice is that all high school bowlers carry different balls to adjust for different lane conditions and, with so much work being put in during the year, those bowling balls will usually not make it through an entire year.

“I know my son probably went through five or six balls a year,” said Jeremy Songer, an avid bowler and the father of Ottumwa boys junior bowler Braydon Songer. “Between the two of us, we’ve probably spent over $1,100 in bowling balls alone this year.

“I wouldn’t stop there. As long as they’re having fun, to me it keeps them occupied. In today’s world, I’d rather have the kids spending my money on bowling than spending it on other things.”

Songer will have twice as many expenses next year when Braydon begins his senior season and his daughter, Hannalee, joins the OHS girls team as a freshman. Besides the equipment needed to make it through a high school bowling season, Songer’s children also bowl in the Champion Junior-Senior league on Saturdays throughout the year while also traveling to compete in other tournaments.

“I want to see them happy, so I provide the equipment,” Songer said. “That’s where I think, for other kids, it’s kind of lacking.”

Doug Techel has been a part of the Ottumwa bowling program since it was brought back 20 years ago. While the Bulldogs have proven to be a sound investment for the school, bringing home nine total state team championships over those two decades, it hasn’t come without a hefty price tag.

“We figured, at today’s prices, for the bowling team to be at the state is approximately $16,000 a year that is donated back to the school,” Techel said. “It’s an expensive sport, both for the proprietors and for the bowlers.”

Brian Cutsforth, who has incurred those expenses as the proud parent of former OHS bowlers, is now the coach of the Evans Middle School bowling program. Having helped start the program back in 2012 with Techel, Cutsforth has seen a steady group of 10-15 bowlers a year come through the program.

“We’d like to see 20-25 kids come out each year,” Cutsforth said. “I teach at the middle school and I talk with the kids about coming out. The money is the issue for some of them. What I try to let them know is that we’re here for them. We’ll help them out anyway we can.

“Personally, if a kid came up to me needing something, I’d give him one my old bowling balls or a pair of bowling shoes,” Songer added. “That’s where we try to come together as a bowling family to help grow the sport.”

The other factor in getting kids to join the program at a young age is awareness. The Evans bowling program is looking to join Alpha Dog wrestling, Ottumwa YMCA Hurricanes swimming and the Ottumwa Bulldog archery teams as programs that can grow with the hope of keeping kids hooked throughout high school.

“In middle school especially, the kids get to try everything,” Cutsforth said. “You might get those kids come out for bowling practice just to try it out. We’ve had some archery kids come over after an hour of practice there and bowl with us for an hour.”

After several years of simply teaching the basics to kids, the Evans Middle School program has begun to venture out to compete in tournaments around the state. The hope for Cutsforth is that competition against other programs will give the kids a feel of what it might be like to represent Ottumwa on the high school level.

“Now, they’re starting to get that feeling that they truly are an Ottumwa bowler. They’re getting to do everything the high school bowlers are getting to do,” Cutsforth said. “I’m starting to see those kids wear those Ottumwa bowling shirts with pride during class. They’ll come up to me on Fridays and remind me that we’ve got a bowling meet on Saturday.

“We’re here to have fun and teach everyone the fundamentals of bowling. You get a couple kids to bring a couple friends with them just to try it out, hopefully you hook them and hopefully they bring another friend of two out. You’re always trying to build and getting those kids involved. That’s where it’s at.”