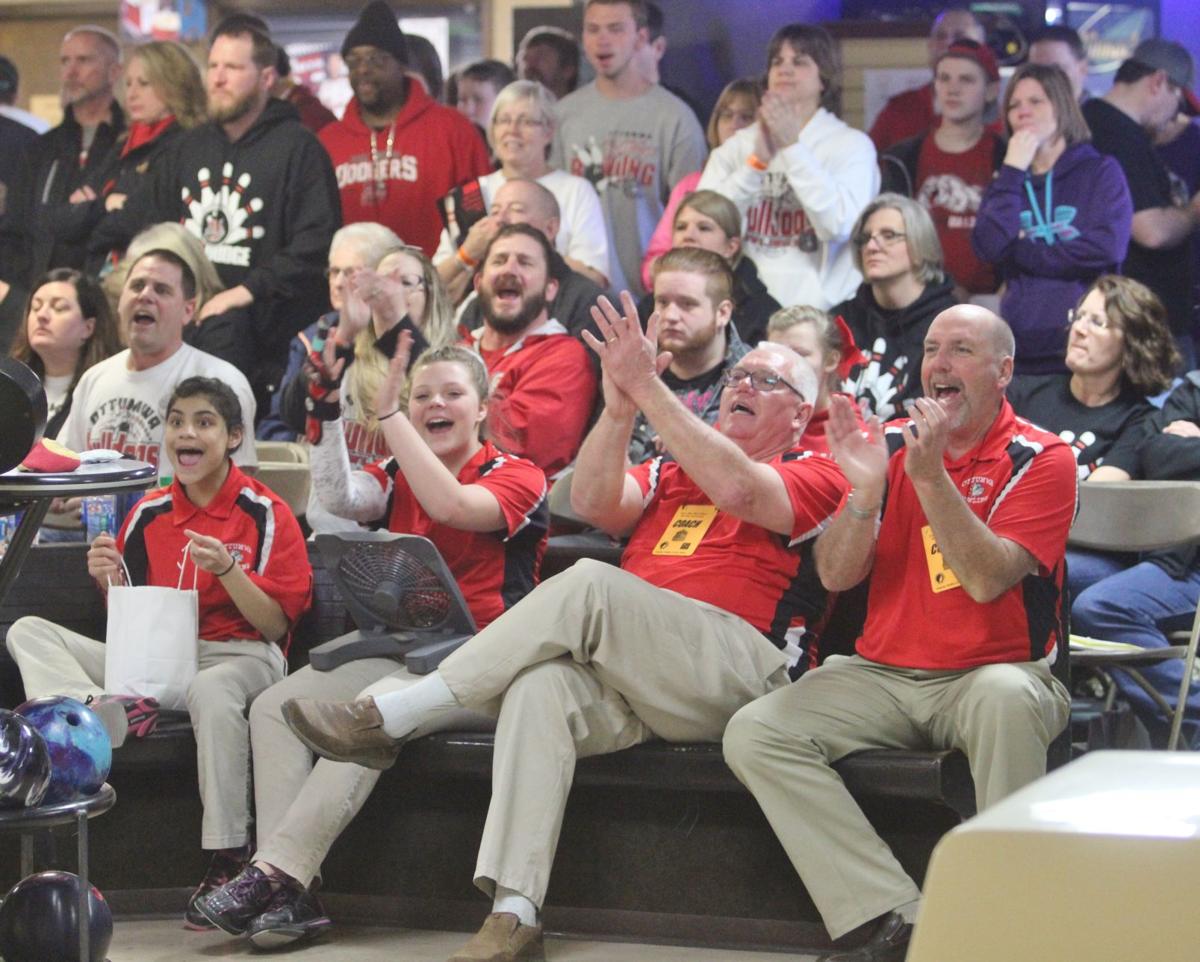 Following a strike thrown by McKinna Haines, (from left to right) Jenny Goodman, Kayla Davidson, assistant coach Tom Maher and head coach Doug Techel celebrate as the Ottumwa girls bowling team competed on Tuesday in the Class 2A State Tournament at Plaza Lanes in Des Moines on the way to winning the 2017 state championship. 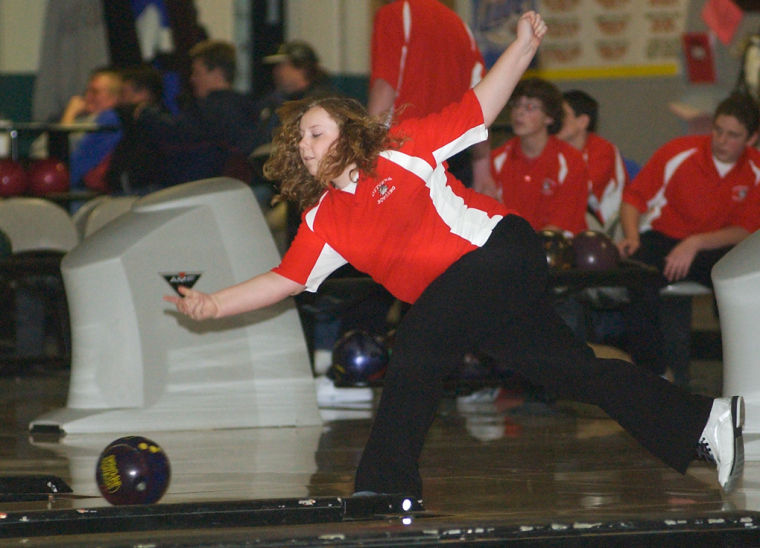 Katie Maher follows through during Ottumwa girls bowling action at Champion Bowl. Maher was part of a OHS state championship team in 2009 before winning the the Class 2A girls state bowling individual championship in 2011.

Following a strike thrown by McKinna Haines, (from left to right) Jenny Goodman, Kayla Davidson, assistant coach Tom Maher and head coach Doug Techel celebrate as the Ottumwa girls bowling team competed on Tuesday in the Class 2A State Tournament at Plaza Lanes in Des Moines on the way to winning the 2017 state championship.

Katie Maher follows through during Ottumwa girls bowling action at Champion Bowl. Maher was part of a OHS state championship team in 2009 before winning the the Class 2A girls state bowling individual championship in 2011.

NOTE: This is the second story in a series about the Ottumwa High School bowling program

OTTUMWA – Doug Techel has been coaching the Ottumwa High School girls bowling team for the past two decades.

In those 20 seasons, Techel makes no bones about it. The most recent four-year run of the Bulldogs, featuring three state championships and a third-place finish in Class 3A last season, certainly stands out.

“This is the best run for a group of girls over a four-year run,” Techel said. “What do you say about a group of girls like that? From day one this year, I told the girls we’re as good if not better than any team in the state. It just comes down to how you perform on that day.”

Ottumwa’s most recent state championship run, however, ties back to the winning tradition of the best all-around high school bowling program in the state. Jenny Goodman and Anna Wetrich became the first bowlers in OHS history to participate in three state championship wins, joining McKinna Haines as the three Bulldog teammates that were part of this year’s run to the 3A state title and the 2017 championship win in the Class 2A tournament as freshmen.

“It’s even more meaningful now knowing how many state championships this program has won,” Wetrich said. “When I was a freshman, I didn’t really realize how successful the program had been. As time went along and I looked at other sports, you don’t see a lot of other state titles from our school. Most teams are happy just to make it to a state tournament. For us to win three state championships is an incredible amount of success.”

Wetrich, Haines and Goodman had great leaders that helped the freshmen teammates capture what Techel at the time called, “one of Ottumwa’s most unexpected state championship teams.” Carin Davidson followed up a 200 average in two individual games at the 2017 state tournament by throwing 10 strikes on 10 shots during the five Baker games, erasing a 41-pin deficit with a 1,056 total to rally past Urbandale and Waterloo East for the championship.

One year later, Carin’s younger sister Kayla Davidson placed third individually with a two-game total of 444, helping OHS outlast Le Mars and Council Bluffs Thomas Jefferson to win the 2018 2A state title by 19 pins. Tara Davidson, proud mother of Kayla and Carin, has a deep appreciation for the program, having grown up with three sisters that were part of establishing the winning tradition of the program.

“The bowling community is so much different than any other sport that anyone in my family have ever been a part of,” Davidson said. “It’s very close-knit. The people are so supportive of each other. It becomes a family throughout the year.

“I wasn’t surprised at all to see the type of success Kayla and Carin were a part of. I saw it for several years watching my sisters going back to the early 2000s. The strength that Doug has built with the program and bringing (current OHS head boys bowling coach) Tom (Maher) has only helped to improve the program. They both work well together. They find the strength in every kid separately and work to build a very strong core with the teams that they have.”

Kayla and Carin Davidson ultimately followed in the footsteps of their aunt, Katie (Maher) Brice. Brice was part of the 2009 state championship team before capping her prep career winning the Class 2A individual state crown in 2011, and remains the lone individual champion in school history.

“Seeing that success of the teams that came before you definitely plays a part in motivating you to add to that tradition of success,” Brice said. “You see it every day out at (Champion Bowl). You see the banners. You see the number of state tournament appearances and state titles up on the wall.”

The Ottumwa boys also share in the tradition of passing down success between family members. Goodman’s older brother, Isaac, was part of the 2013 OHS boys team that finished as the Class 2A state runner-up to Davenport North.

Braxton Coble was also part of that team which, at the time, had secured the highest finish in school history in the state-sanctioned state tournament. Four years later, younger brother Jaxson would begin a four-year run at OHS that included a pair of state medals, a state runner-up finish in 2018 and a third-place finish this past season, coming within 14 pins of the program’s first state title.

“I’ve been up before to watch the state tournament when Braxton competed here, so I kind of knew what to expect coming in,” Jaxson Coble said. “It (was) a good start for me to finish eighth in the state as a freshman. It (meant) I (could) go on from here and get better to become number one in the state.”

That competitive nature seems to be the common trait among all bowlers that compete for Ottumwa. No Iowa high school has combined to qualify for as many state tournaments as the Ottumwa, the only program to have a team qualify for all 14 sanctioned girls state bowling tournaments, and a boys program that is tied for the most state tournament appearances (nine) since the IAHSAA sanctioned bowling in 2010; the only year the Bulldogs missed was 2016.

For many bowlers, including Brice, that success at Ottumwa has opened the doors of opportunity to be successful away from the bowling alley. Many Bulldog bowlers have earned college scholarships, using bowling as a way to help pay for a higher education.

“I would not be a five-time All-American without the skills I learned in Ottumwa,” Brice said. “If my mom and dad hadn’t put a bowling ball in my hands when I was young, I may not have competed in the sport.

Brice is a byproduct of the early success the Ottumwa program had, watching the first teams compete as part of the Iowa Bowling Federation after the sport was brought back for high school competition in 2000. Before she was winning her own state titles as part of the program, Brice was part of the youth bowling program at Champion Bowl competing just before the OHS bowlers came out to the alley.

“Tara Gooden and Karissa Roberts were my babysitters,” Brice recalled. “I bowled in the youth league every Saturday, so I would hang around as a kid and watch the bowling team compete.

“It’s amazing to see what my dad (Tom) and Doug have done throughout the years. The names change and the program just continues to be successful. I know my dad, if he’s not at the bowling alley, he’s home thinking of ways to be a better coach and to help the bowling improve.”

Even as she works in the medical field, living in Cedar Rapids while working in Iowa City, two areas that have been hit the hardest in Iowa by the current COVID-19 coronavirus outbreak. Even with the hectic hours of her job on a normal day, Brice was able to be in attendance for the state bowling tournament this past month, continuing a tradition that started several years earlier.

Brice is hopeful that another tradition can begin starting next year, bringing some of the best bowlers in program history home to test themselves against the current group of Bulldog student athletes.

“I know one of the ideas that came up was a possible matchup between the current bowlers and the alumni,” Brice said. “I’d be up for it. Hopefully, we can make it happen.

“The great thing about the sport is, anyone can be a part of it. You can be super-competitive, or you can bowl for fun. Everyone gets a chance to enjoy it and enjoy it for several years.”