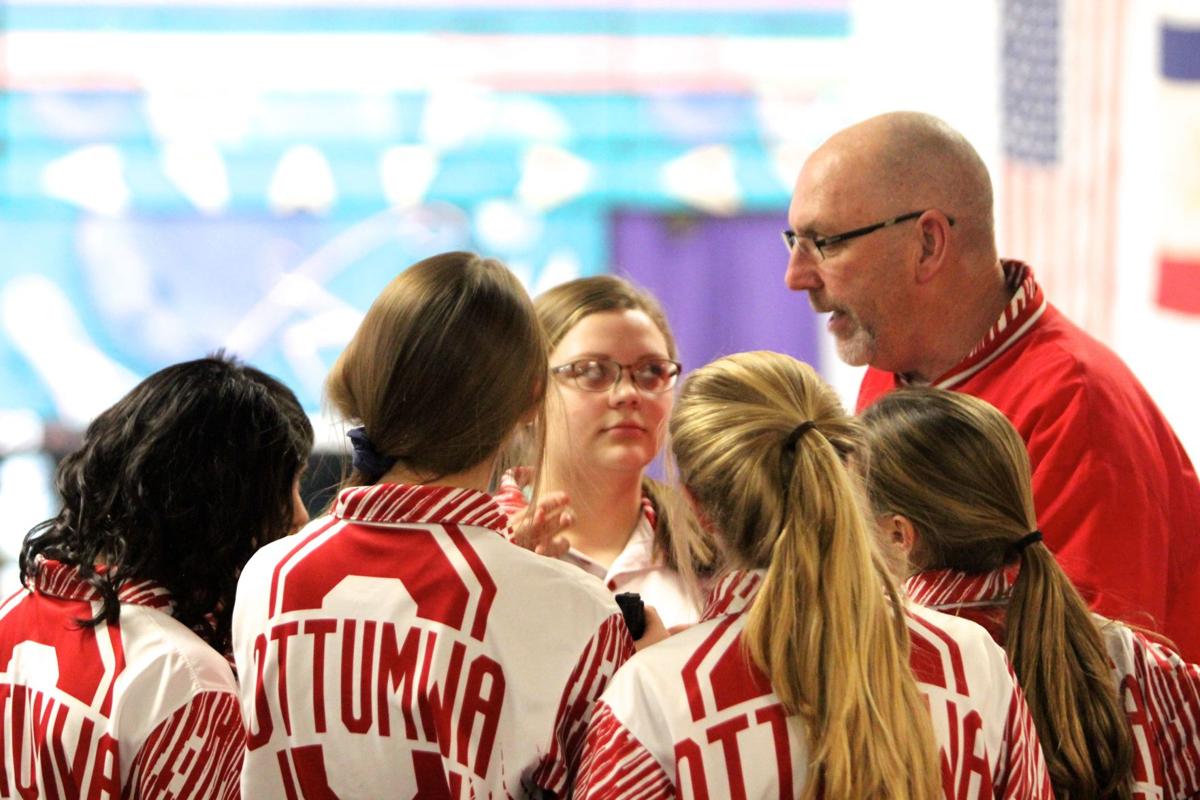 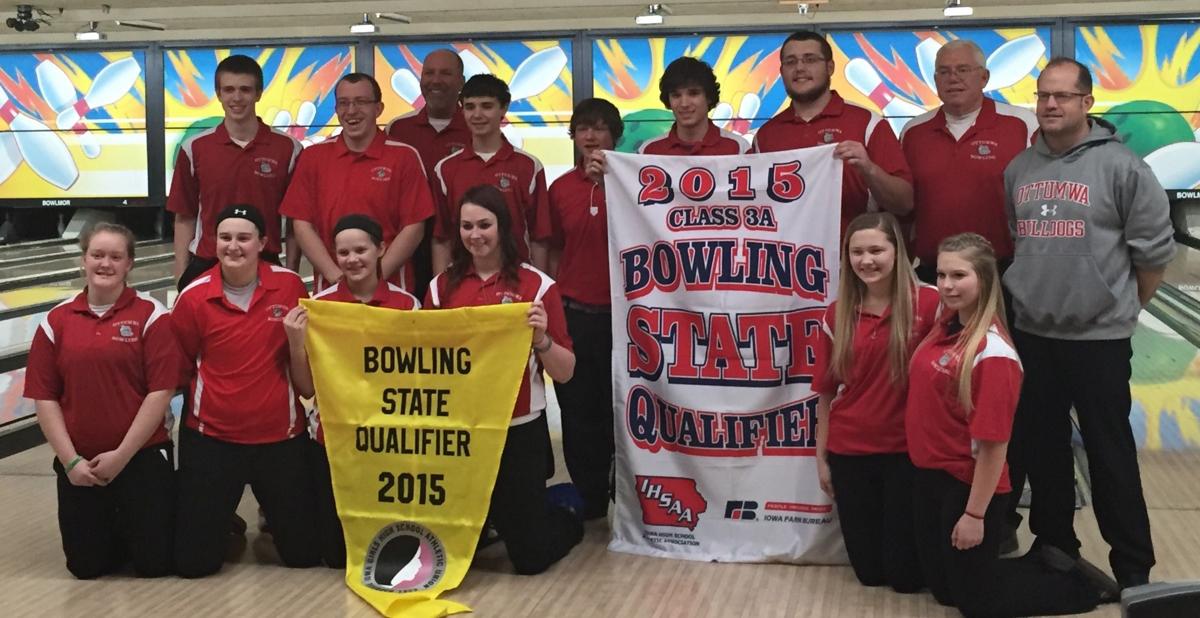 Pictured above are the Ottumwa girls’ and boys’ bowling teams with their 2014-15 state-qualifying banners. The Ottumwa bowling programs have combined for 22 state tournament appearances, the most for any Iowa high school.

Pictured above are the Ottumwa girls’ and boys’ bowling teams with their 2014-15 state-qualifying banners. The Ottumwa bowling programs have combined for 22 state tournament appearances, the most for any Iowa high school.

NOTE: This is the first story in a series about the Ottumwa High School bowling program

OTTUMWA – Year in and year out, the Ottumwa High School girls and boys bowling programs have been in the mix for a state championship.

This past season saw the Ottumwa girls and boys come as close as ever in program history to a state championship sweep. The OHS girls won their sixth state title, the most by any program in the 14 seasons that bowling has been a sanctioned high school sport, while the OHS boys finished just 14 pins shy of their first sanctioned state title finishing third in the Class 2A tournament.

Fittingly, a season that ended with so much success began back in November on a day where the entire successful history of Ottumwa High School bowling as on display. The first “Meet the Bulldogs” event at Champion Bowl featured a table filled with the various trophies, plaques and medals won by program over the past two decades and famous alumni like Dick Guiter, who was part of helping the Ottumwa boys win three unsanctioned state titles from 1964-66.

“It was actually kind of shocking to see all the awards in once place,” Ottumwa senior Dawson Greene said. “We had about half the trophies at the bowling alley and the other half at the school. Seeing all of them out, it looks like we’ve won a lot more than I thought we did.”

Doug Techel has been with the Ottumwa girls from the start, guiding the Bulldogs to every one of the program’s 20 state tournament appearances. Bowling was a dormant high school sports for several years, but Techel was part of the initial discussions that eventually led to its return in 2000.

“I bought the bowling alley (Champion Bowl) back in 1998 and got on the state board of directors for proprietors in 1999,” Techel said. “That’s when they started talking about bowling, bringing it back as a high school sport with the Iowa Bowling Federation.”

While the decision was made to bring back a high school season and state tournament, it was not a given that Ottumwa would be a participant. That required Dave Clement, then the OHS athletic director, to give the green light.

“I went to Dave to ask if we had his support. We had a good discussion about it,” Techel said. “Dave was a big football guy. I told Dave that not many of my bowlers would make his football team, but I also didn’t think many of the football players would make it onto my bowling team.

The IBF collected the total number of schools that would be participating that first year while Clement scheduled meets for Ottumwa. The Bulldogs had home-and-away meets with the Des Moines public schools that were part of the CIML Metro, helping to fill up that first schedule.

“We just made the circuit,” Techel said. “Back then, we had about twice as many youth bowlers as we do now. It was pretty much a natural fit. Ottumwa has been a great bowling town forever. This was just a natural thing for the kids around here. If you didn’t play basketball or wrestle, and for the girls there was only basketball, this was the natural thing to step into.”

That first season of high school bowling ended with a 13th-place finish for Ottumwa in the 20-team IBF state tournament in 2001, played at Plaza Lanes in Des Moines. The Bulldog girls came back to finish seventh in 2002, then won three straight state championships from 2003-05, matching the success of the OHS boys back in the 1960s.

“Back then, people were allowed to set chairs up along the approaches. The tournament was also televised,” Techel said. “You would qualify for the championship with your two regular games and the top two teams would play the best three-of-five Baker games head-to-head to decide the state title.”

Brandon Brooks has seen the evolution of the state tournament, bowling for Ottumwa for four years, and the Bulldog girls won the first IGHSAU-sanctioned state title in 2007, when he was a senior. Brooks coached the OHS boys to a runner-up finish in the 2018 Class 2A boys tournament before taking over the bowling program at William Penn University.

“It was always a pretty incredible atmosphere, just as it is now,” Brooks recalled of the state bowling tournament. “That team final was a pretty cool thing to witness. I can remember sitting there in a chair along the alley on the approach during one of those state finals. They did some really cool things with the tournament back there. It’s always been an atmosphere the kids don’t get to experience in any other activity.”

Many of the names that can be found among the top bowlers in Ottumwa during league play these days were part of those early days competing in the unsanctioned state tournaments almost two decades ago. Tara Gooden, one of city’s top female bowlers, helped secure Ottumwa’s last unsanctioned girls state team title during a memorable tournament that came down to the final baker game in 2005.

“Tara got up and needed two strikes to win the championship,” Techel said. “I told her this is something you’ve lived for all your life. She hit three straight strikes in that 10th frame to win the tournament.”

Ottumwa also began building a tradition that came with consistently qualifying for the state tournament in Des Moines. Techel turned the trip into a team-bonding experience, rewarding the kids that helped add to the success of the program.

“We would go up and stay up by Jordan Creek Mall the night before the state tournament,” Techel said. “We had a routine we did every single year. We’d go out to eat at Joe’s Crab Shack and we’d let the girls go shop at the mall for a couple of hours. The kids really enjoyed that.

“We got big trophies, the metal kind, not the wood kind the state gives out now. They were really happy to get them. After all, it meant you won the state tournament.”

In 2009, the IHSAA sanctioned bowling for boys. Ottumwa qualified for four straight state tournaments from 2010-13, and the Bulldogs have combined for the most state tournament appearances (23) of any school in the state.

“The state was cautious at first. There had to be lot of dedication and commitment from the bowling proprietors. It wasn’t to cost the state or the high schools any money,” Techel said. “Coaches were not paid and you couldn’t charge the school any rent to use the bowling alleys. All that was given as a seed program to get where we are now."

“At that time, the men’s side of the ABC (American Bowling Congress) donated $3,000 to it,” Ottumwa boys bowling coach John Eddy added. “The Elks Lodge donated another $3,000. There were also a bunch of guys that bowled in the John Deere league that donated another $2,000 or $3,000.”

Both Ottumwa teams finished second in the state in 2013, the first year both programs had finished among the top two in the state during the same year. The highest placing for the two programs in the same year came in 2018, when the Bulldog boys finished second in 2A while the Ottumwa girls won a second straight state team title and fifth overall sanctioned state championship.

“It all started with us asking for donations from our league bowlers to help us be able to go up to state and even take the kids out to eat after a meet,” Techel said. “That’s why I think it’s a great thing for us to have the state banners out at Champion Bowl. Every time those league bowlers come in to bowl, I think it’s part of the ownership that they’ve been part this legacy.

"We’ve been to all 14 state girls bowling tournaments. The boys are tied for first in the state with nine appearances. There’s no school in the state that can claim that. It’s a sport where you don’t have to be tall or fast or strong. Anybody can bowl. It just takes a dedication to practice and get better. That’s what we’ve been preaching for 20 years.”