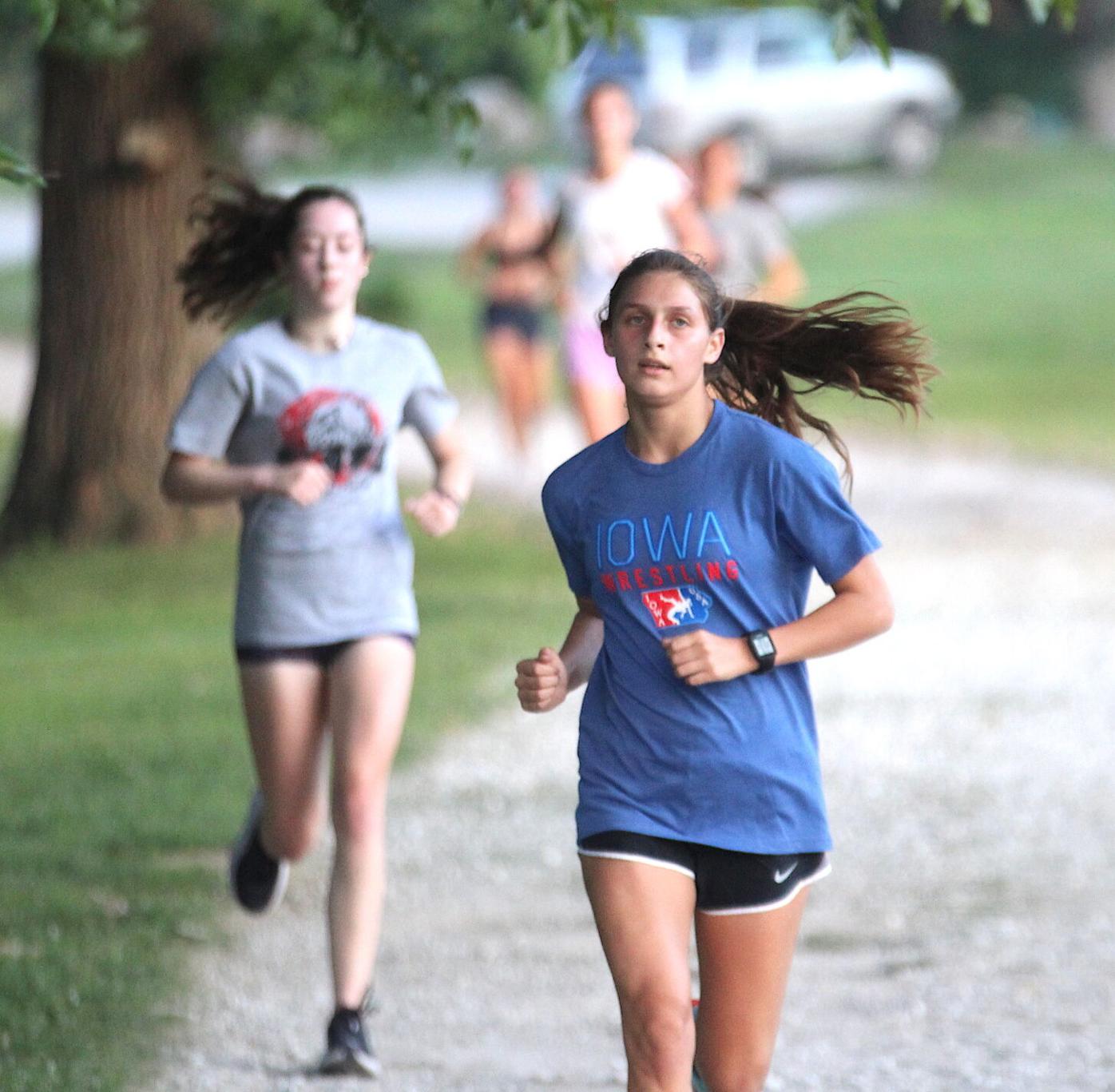 Ottumwa teammates Jasmine Luedtke (blue) and Lina Newland (gray) lead a pack of cross-country runners along a path inside the Greater Ottumwa Park on Monday during the first day of the Ottumwa girls cross-country camp. 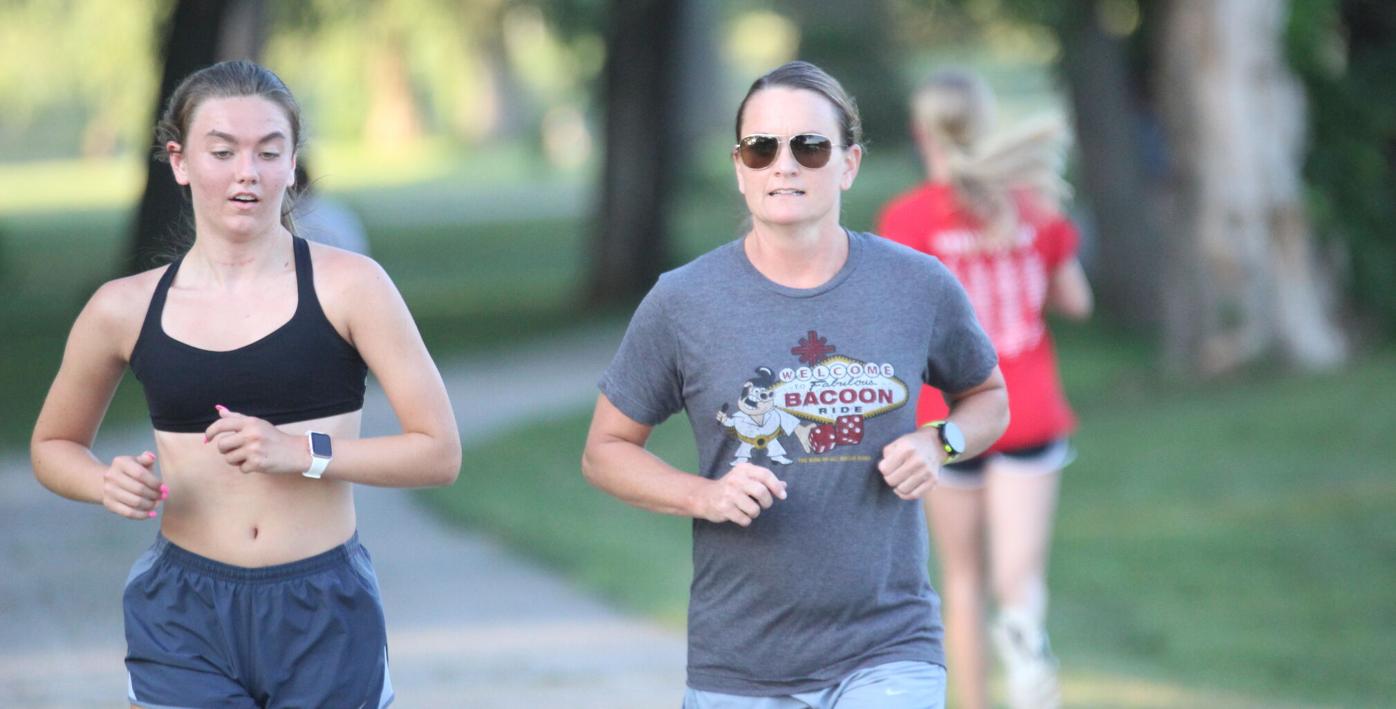 Ottumwa teammates Jasmine Luedtke (blue) and Lina Newland (gray) lead a pack of cross-country runners along a path inside the Greater Ottumwa Park on Monday during the first day of the Ottumwa girls cross-country camp.

OTTUMWA – Lina Newland has a state track and field medal from her all-state performance in the girls long jump this past spring.

There is a common trait that might help Newland and Luedtke to lead the Ottumwa High School girls cross-country team to a successful season this fall. The two were leading the pack around the Greater Ottumwa Park on Monday night during the opening night of the team's annual preseason camp, which leads into the official start of the season with the first day of practice scheduled for Aug. 9.

"I think there's a lot of motivation behind it," Newland said. "You can look at that medal and see what you were able to accomplish with a lot of hard work. That's what that medal represents. It's motivation for this season to continue working really hard and finish the season doing the best that you can."

"With all the training I've gotten from wrestling, it's taught me how to push through and to never give up," Luedtke said. "I want to strive to be the best. I didn't place where I wanted to at Fargo. That's really been pushing me. I want to be the best and I need to train to be the best."

Several soon-to-be members of the OHS girls cross-country team took part in the first night of the week-long camp. Kristin Mitchell, set to begin her third season at the helm of the Ottumwa girls cross-country program, feels this week is just a glimpse of what's to come.

"We have the potential to have the biggest team we've ever had," Mitchell said. "When we held our preseason meetings, we had 35 kids show up. We may not get all 35 kids to come out, but if we get even 30, that'll be amazing. It shows that we're building a program that has the potential to do great things."

Newland and Luedtke are two of the top returning runners for Ottumwa, which is in a somewhat familiar position of starting a season without a returning state qualifier. It was the same position OHS was in last year after the graduation of four-time state qualifier All Bookin-Nosbisch and three-time state runner Carollin Mellin.

The season ended with Meghan Coulter stepping up to extend Ottumwa's run of six consecutive seasons with at least one runner qualifying for state. Newland and Luedtke are the top two contenders to bring an Ottumwa representative to the seventh straight state cross-country meet. Luedtke finished 33rd in her first bid for a state-qualifying meet last year in 22:09 while Lina Newland finishing 42nd in 23:43.4, leading a pack of five returning OHS runners that gained regional meet experience last November.

"It kind of shocked me how well I was doing early last season," Luedtke said after finishing as Ottumwa's second-fastest runner in her freshman season. "I feel like, being with Meghan, pushed me a lot more. It helped me realize I can be as good as I want to be and I can push for that."

Newland, who like Coulter last year will be stepping into the role as a senior leader for the first time this season, talked about the influence of learning from and running with state champions like Mellin, Coulter, Alli and Grace Bookin-Nosbisch over her first three years of running at Ottumwa.

"Seeing how hard they worked day after day set a great example for all of us to follow," Newland said. "Every day during the summer, they went out there and worked hard to achieve their success. That's one thing I've learned from them."

Besides Newland and Luedtke, Ottumwa is expected to have returning regional runners Yaeli Carapia, Olivia Coram and Lilly Mitchell. Several underclassmen should also add the depth of the Bulldogs, who look to find success truly as a team throughout the course of upcoming season.

"I think we'll be better as a pack than we've ever been," Newland said. "Most of the time, there's been a few top runners that have been out further ahead of everyone else. I think we're going to be a lot closer in pace, which will be great to attack each person in front of us as a group."

Mitchell is equally as excited to see several Ottumwa runners competing in meets throughout the year. With more kids out for the sport, both the varsity and junior varsity teams should be well represented wherever the Bulldogs run throughout the fall.