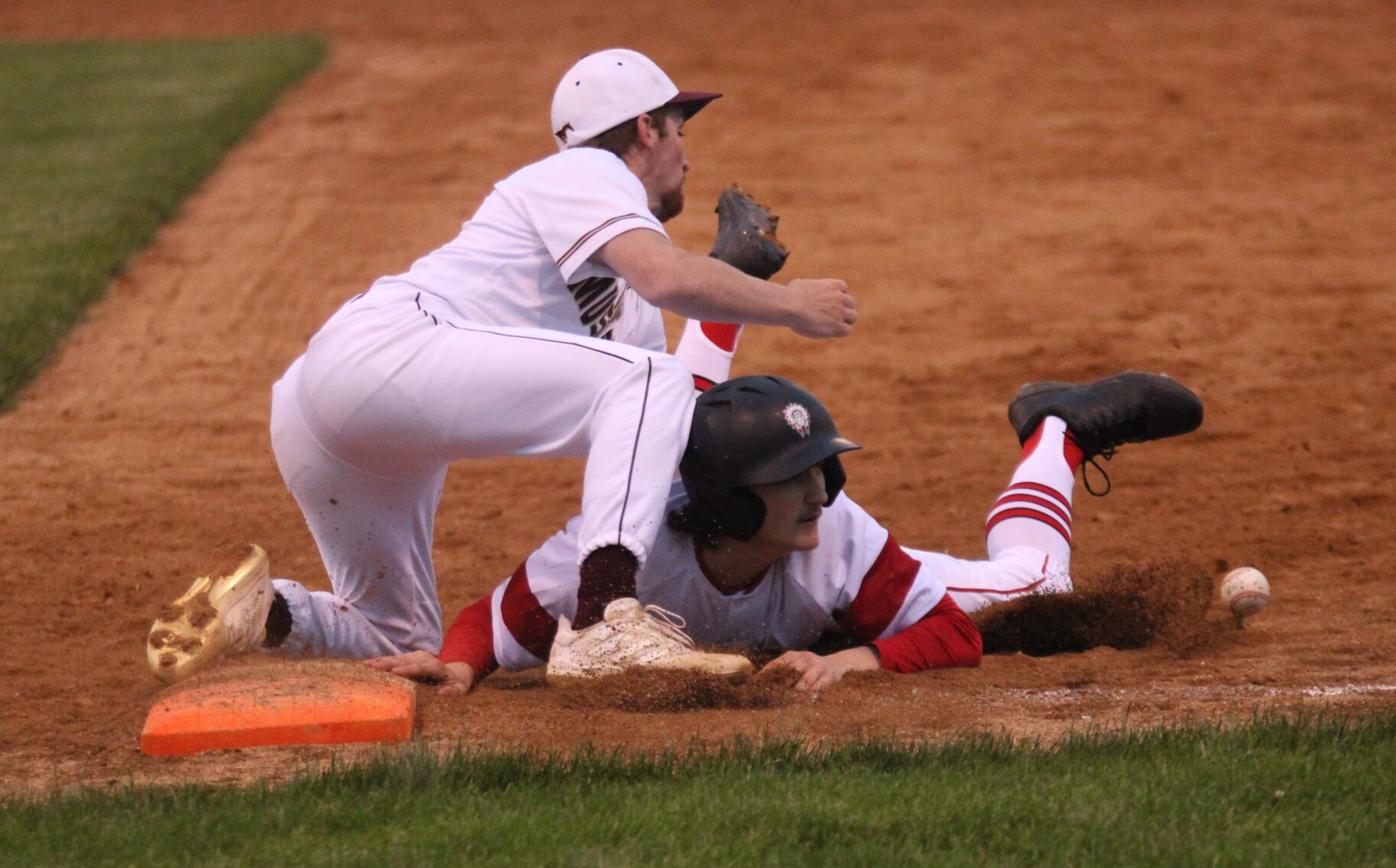 Centerville freshman Sylar Esaias dives back into first base as the baseball gets away from Davis County first baseman Easton White on Friday night during the fifth inning of a South Central Conference contest at Pat Daugherty Field in Centerville between the Big Reds and Mustangs. Esaias would come all the way around to score the tiebreaking run in a 4-2 win for No. 2 (2A) Centerville. 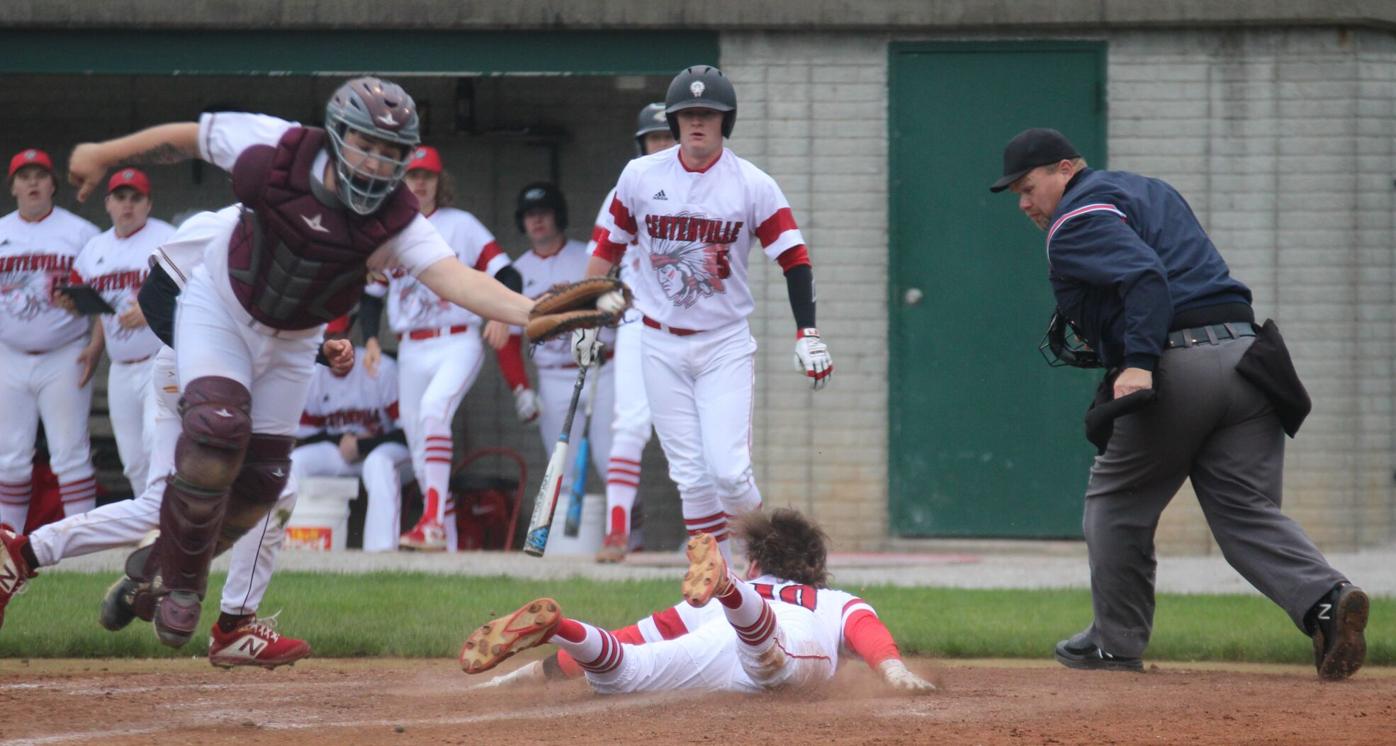 Centerville freshman Sylar Esaias dives back into first base as the baseball gets away from Davis County first baseman Easton White on Friday night during the fifth inning of a South Central Conference contest at Pat Daugherty Field in Centerville between the Big Reds and Mustangs. Esaias would come all the way around to score the tiebreaking run in a 4-2 win for No. 2 (2A) Centerville.

CENTERVILLE — It will be a season filled with tests for the Centerville baseball team to pass.

Friday night's home opener proved even the youngest members of the Big Reds are up for the challenge.

Freshman Sylar Esaias completed an adventurous journey around the bases around the bases, one that included a cleat to the wrist while sliding into second base, by scoring the go-ahead run in the bottom of the fifth inning as second-ranked (2A) Centerville edged Davis County, 4-2, moving to 3-0 on the season and 3-0 in the South Central Conference.

"Anytime you get a chance to get guys experience is definitely huge, especially in a close game in a conference game," Centerville head baseball coach Ryan Hodges said. "That experience is huge. It's going to carry over. Those situations are going to come up again and again. When you don't think something will happen, they can gain from that experience even more.

"It was a great team win. The guys did a great job battling through the elements. We're lucky enough to even play."

Brady Kauzlarich, a player with plenty of big-game experience over his five years playing baseball for the Centerville Big Reds, watched from the on-deck circle as Esaias made the dash for home plate in the fifth on a wild pitch that sent completed a walk drawn by Kade Mosley. After sliding across the plate just beating the tag applied by Davis County pitcher Justin Matheney, Esaias looked up to the umpire to confirm he was safe before being greeted by his senior teammate.

"Sylar is always in the mix for us up and cheering for us," Kauzlarich said after collecting two hits and scoring two runs of his own for Centerville. "To see him on the bases doing something to help the team had to feel really good. Seeing me as he got up probably made him feel a little more excited. It had to feel great everything he went through on the bases finally paid off."

Centerville had to battle to the end to outlast Davis County after the resilient Mustangs fought back after three tough innings at the plate against Merrick Mathews. Making his first pitching start of the year, Mathews set down Davis County in order with four strikeouts against the first nine batters and was an out away from taking a no-hitter into the fifth.

Caedyn Glosser, however, broke up that no-hit bid and the shutout with one swing, bringing home Clay Collier with a two-out double. Gavin McCall followed with an RBI single to right that brought Glosser home with the tying run.

After avoiding a pair of pick-off attempts by Matheney, Esaias was off to second on a wild pitch drawing a throw from McCall that went into center field. Esaisas picked himself up and dashed on to third before realizing he had been caught by the spike of Mustang shortstop Noah Zmolek on his dive into second.

"It was a pretty deep cut," Kauzlarich said. "He got up after he ran to third and was like 'Oh, gosh!"

Esaisas would be back in the dugout minutes later after scoring the go-ahead run. Shondel would add a two-out RBI single in his next at-bat, driving in Otis Williams from second giving Williams an extra run of insurance to close out the Mustangs in the seventh, striking out Noah Hamm after walking Nolan Cremer with two outs.

"As a coach, sometimes you're a little more critical than you need to be, but this is one of the better opening weeks we've had in a long time," Hodges said. "We stayed healthy through it. We did some things that we need to clean up, but we also did some really good things."

Centerville is off until heading to Carlisle on Tuesday for the first of many non-conference tests for the second-ranked (2A) Big Reds this season. Davis County (1-2, 1-2 SCC) hosts Fairfield, Grinnell and Van Buren County at the West Complex on Saturday in their home tournament.