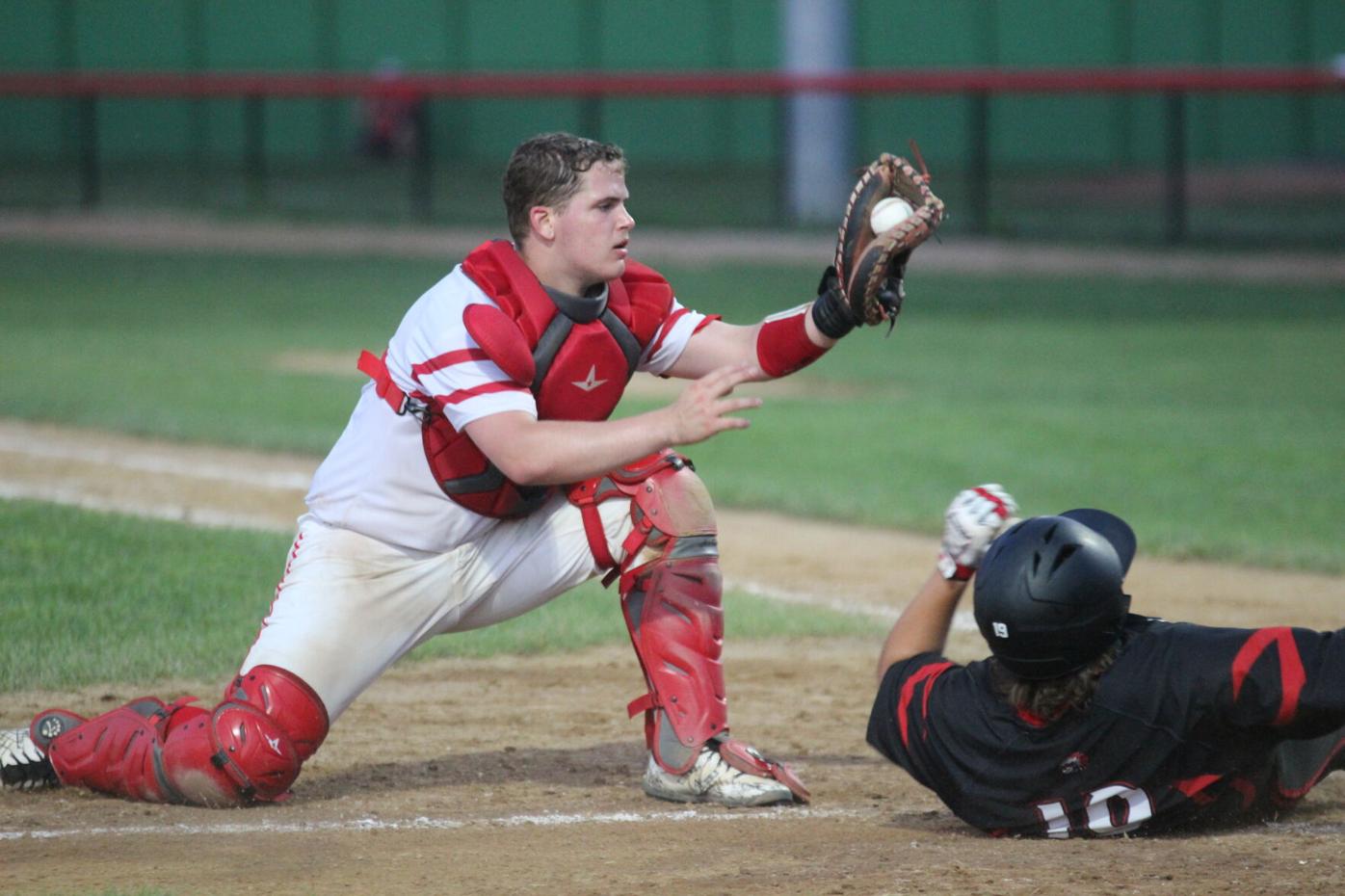 Ottumwa senior catcher Adam Denniston shows the ball in his glove to secure the final out of the fifth inning after tagging out Centerville senior Korey Shondel at home plate on Tuesday night during prep baseball action. Ottumwa held on for a thrilling 7-6 win over Centerville at Legion Memorial Field in Ottumwa. 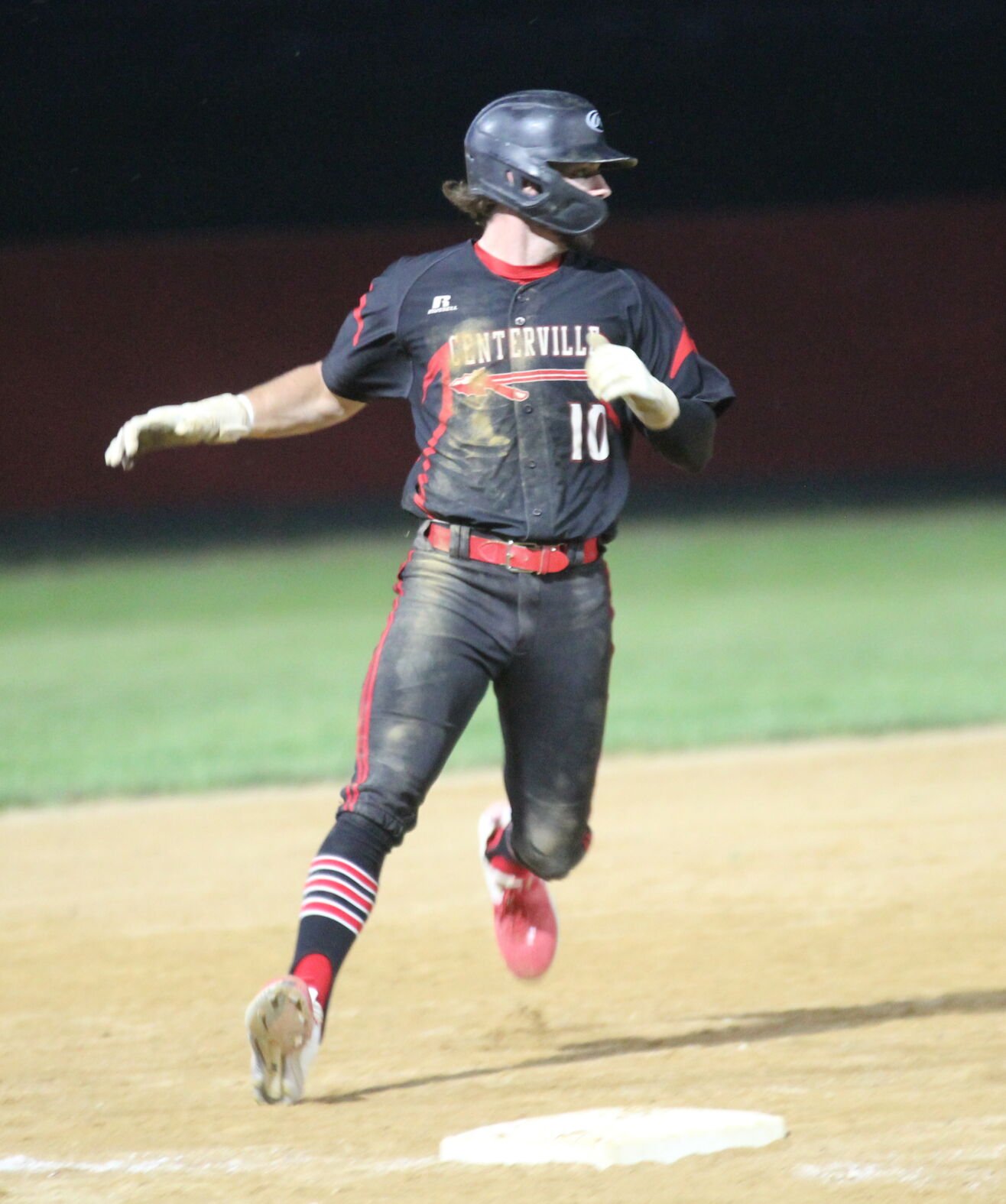 Brady Kauzlarich looks back for a potential throw while heading into third base before scoring a run in the sixth inning for the fourth-ranked (2A) Centerville High School baseball team on Tuesday night against Ottumwa at Legion Memorial Field.

Ottumwa senior catcher Adam Denniston shows the ball in his glove to secure the final out of the fifth inning after tagging out Centerville senior Korey Shondel at home plate on Tuesday night during prep baseball action. Ottumwa held on for a thrilling 7-6 win over Centerville at Legion Memorial Field in Ottumwa.

Brady Kauzlarich looks back for a potential throw while heading into third base before scoring a run in the sixth inning for the fourth-ranked (2A) Centerville High School baseball team on Tuesday night against Ottumwa at Legion Memorial Field.

OTTUMWA – One team might have come out with more runs on the scoreboard when seven innings were complete on Tuesday.

Ryan Hodges and John Jaeger, however, both came out feeling good about what their teams had accomplished in a classic battle of area high school baseball teams hoping to play deep into the summer.

In the end, Jaeger's Ottumwa Bulldogs were able to make enough plays down the stretch to edged Hodges' fourth-ranked (2A) Centerville Big Reds 7-6 at Legion Memorial Field. The game came down to Brady Kauzlarich, one of Centerville's top all-around players, facing Jackson Saunders with the tying run at third and two outs.

Kauzlarich, who has played in three state tournaments over his first four years of high school baseball, tried to lay down a bunt to catch Ottumwa's defense off balance with hopes of using his speed to make it to first base and possibly allow Brody Tuttle to come home with the tying run. The ball instead popped up in the air, allowing Ottumwa senior catcher Adam Denniston to simply stand up from behind the plate and catch the final out.

"We threw another pitcher out there that we have confidence in and Jackson really came through in a big way," Jaeger said. "He's starting to fill in that role of being a closer for us. He's starting to accept that. That's what we need. We need a guy like that who is willing to step into a situation like that.

"Guy on third didn't really faze him. He got us the save and the win."

The conclusion was fitting considering the back-and-forth battle between the teams as Ottumwa built 2-0 and 7-4 leads while Centerville edged in front 3-2 and 4-3 during the contest. The two teams combined for just four strikeouts in seven innings, putting a lot of wheels in motion throughout the night with several baseballs put in play including three bunts by the Big Reds and three sacrifice flies between the two teams.

"That's what I love about the game," Jaeger said. "You never know what's going to happen. It's a chess game. Obviously, tonight, we got the checkmate."

Ottumwa kept right on rolling on Wednesday with a CIML Metro conference doubleheader sweep at Des Moines North. The Bulldogs scored 18 runs in the very first inning of the opening game against the Polar Bears on the way to a 24-0 win in three innings before clinching the sweep with an 18-0 four-inning win in game two.

"The biggest thing I told the guys is that we had to keep our energy up," Jaeger said. "Sometimes, when you play an opponent that's struggling, it's hard to get as excited. If you let teams like that hang around, they can come back to beat you."

It would have been easy for Hodges to be frustrated after coming up a run short against Ottumwa. Coming in on the heels of a 15-0 loss at Grand View University against top-ranked (1A) Newman Catholic, the Big Reds were resilient erasing a 2-0 first-inning deficit against Ottumwa taking the lead for the first time in the fourth inning on a clutch two-run single to center by Kellen Johnson.

"We're not going to shy away from anybody. We had one put on us by a great team like Newman Catholic. For the guys to respond against a quality 4A program in Ottumwa shows a lot about our guys," Hodges said. "For us, it's not about the wins and losses in June. It's about getting to be at our best in July when the postseason rolls around. Games like this are going to prepare us for that. Being able to bounce back on the road is huge."

Blaze Rominger scored the tying run in the fourth, opening the inning with a single before coming home on the first of two sacrifice flies by Carter Thompson. While Rominger would drive in a run and score twice during the game, it was the run he prevented that might have been the game's most decisive play.

Having taken a 4-3 lead in the top of the fifth, Centerville (7-4, 7-1 SCC) had the bases loaded without recording an out and had sights set on busting the game wide open as Mitch Wood struggled early in his first inning on the mound. After striking out Griffin Weber, Wood allowed Kade Mosley to send a fly ball out to right that appeared off the bat to be deep enough to bring home Korey Shondel from third.

Rominger had other ideas. The Bulldog right fielder made the catch and fired a strike to Denniston who secured the ball with plenty of time to tag out a sliding Shondel, ending what could have been a big Centerville inning.

"It felt really good to get out of that inning. It was a tough inning, but we got through it only down a run. That definitely carried over to the bottom half."

Ottumwa (12-3, 6-0 CIML Metro) would put the first three runners of the fifth on, tying the game on an RBI single by Adam Greiner. Jesus Jaime, who matched Rominger with two hits for Ottumwa, scored the tiebreaking run on a wild pitch before Rominger singled in Greiner, giving Ottumwa a 6-4 lead.

Rominger would score for a second straight inning on a sac fly by Thompson, giving Ottumwa an important seventh run. Kauzlarich walked and drew a balk on Wood in the fifth after a double by Johnson, who scored in the sixth on a sac fly by Shondel before Wood struck out Otis Williams to keep the Bulldogs ahead by a run.

Centerville had to rally late to avoid suffering four straight losses this week, gaining a split with Eddyville-Blakesburg-Fremont on Wednesday in an important South Central Conference doubleheader. Tuttle and Mosley connected on consecutive two-out run-scoring hits in the sixth inning of the second game with the Rockets, erasing a 3-2 EBF lead as Centerville scored the final five runs of the night to earn a 7-3 win after Devin Jager's fifth-inning home run in game one snapped a 3-3 tie, lifting the Rockets (8-2, 4-1 SCC) to a 6-3 victory over the Big Reds.