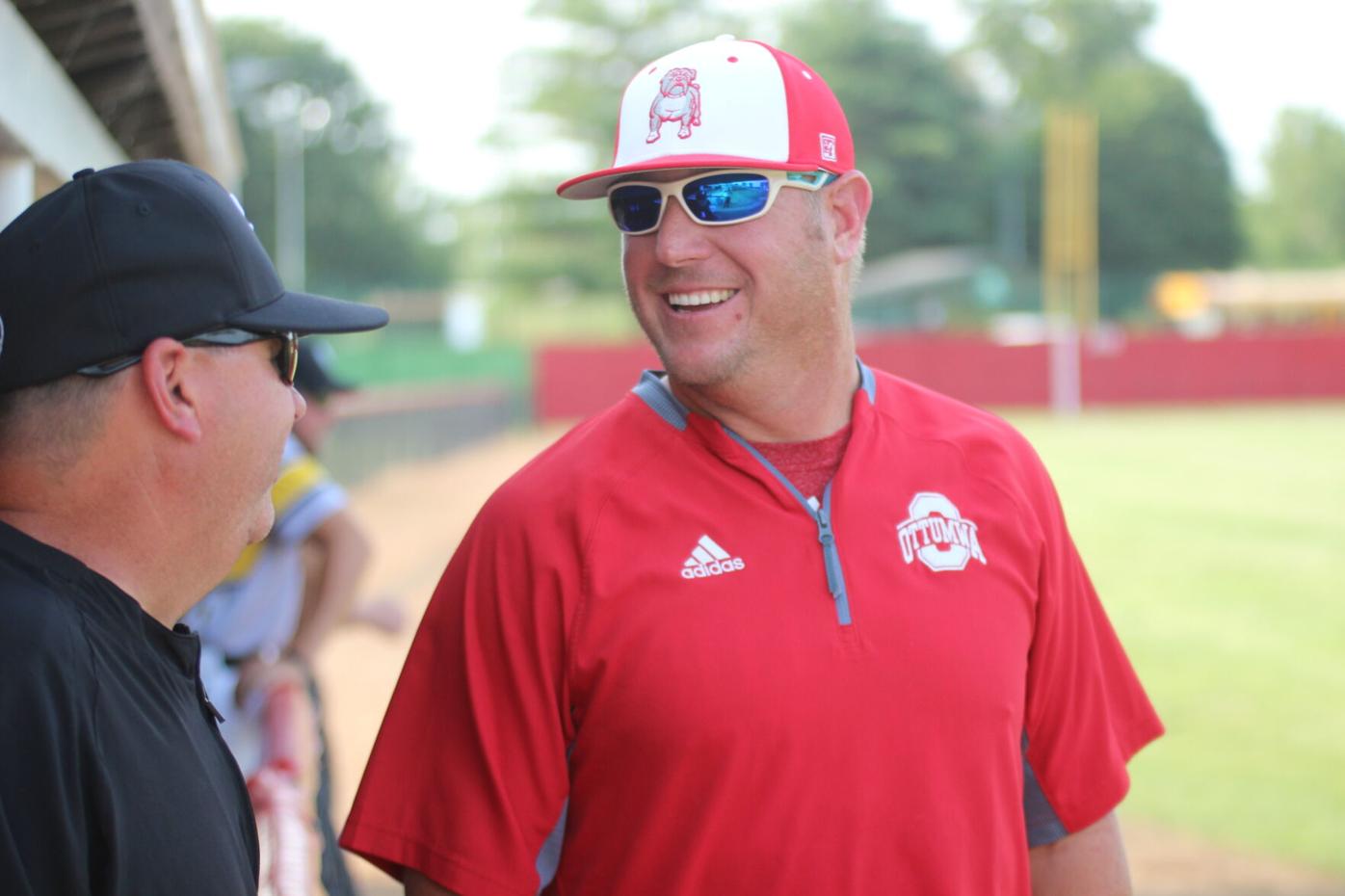 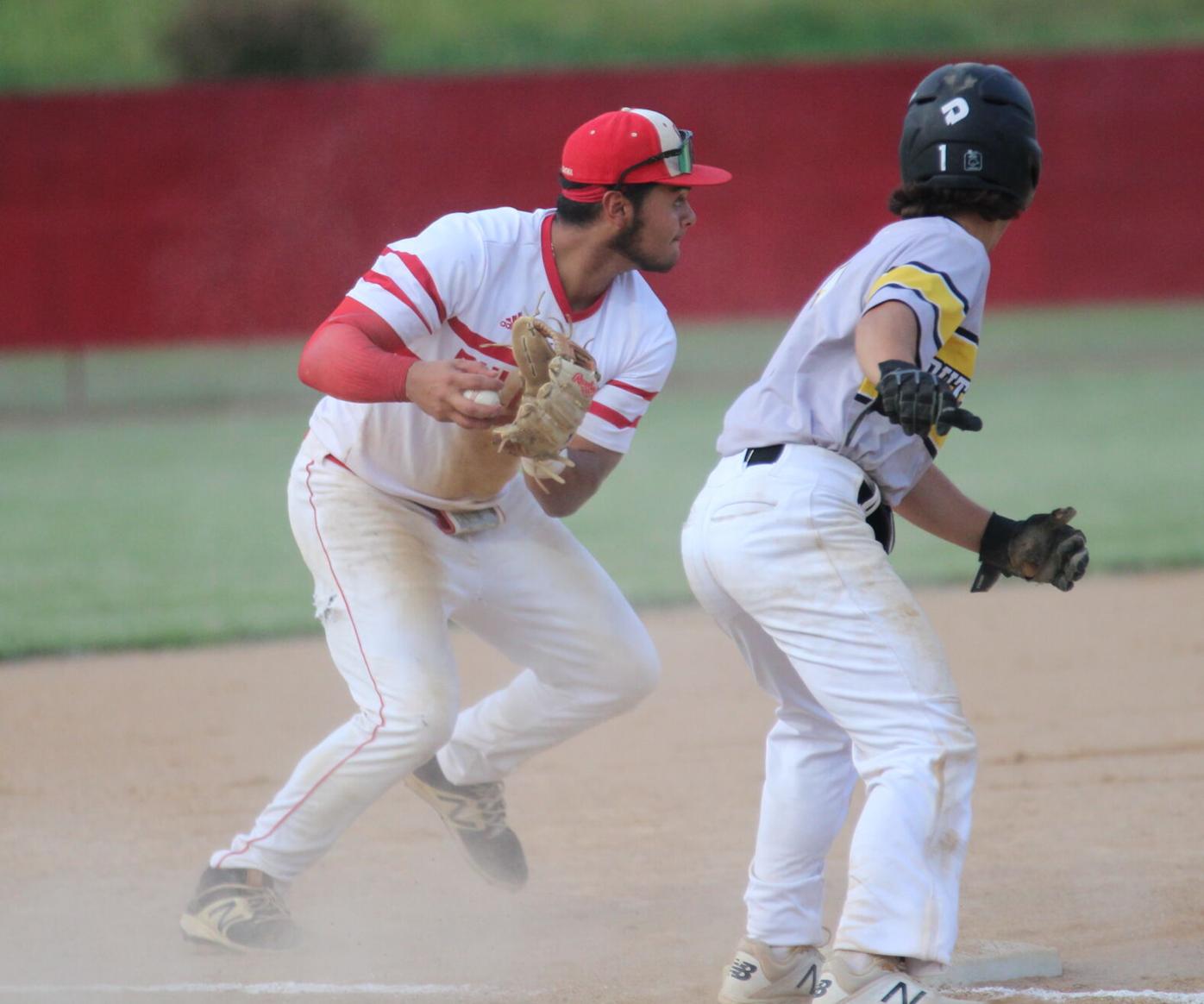 Ottumwa senior third baseman Jesus Jaime lines up a throw to second base in front of Southeast Polk junior Miguel Bernadino (1) on Wednesday night during the second game of a CIML high school baseball doubleheader at Legion Memorial Field in Ottumwa.

Ottumwa senior third baseman Jesus Jaime lines up a throw to second base in front of Southeast Polk junior Miguel Bernadino (1) on Wednesday night during the second game of a CIML high school baseball doubleheader at Legion Memorial Field in Ottumwa.

OTTUMWA – Cedar Rapids Washington will be the first team to test the Ottumwa High School baseball team in this postseason.

Should the Bulldogs pass that test, only one of four remaining teams will be left to get by next week to qualify for the Class 4A Iowa High School State Baseball Tournament.

Ninth-ranked Iowa City High, Burlington, Davenport Central and Davenport North all could pose unique challenges next Wednesday night at Legion Memorial Field should Ottumwa get past the Warriors from Cedar Rapids on Friday. Perhaps the greatest opponent standing between the Bulldogs and the program's first trip to state since 2006, however, might be themselves as Ottumwa seeks to take advantage of their best chance in over decade to win a substate title.

"We've been talking about how to approach it," Ottumwa head baseball coach John Jaeger said about Friday's substate opener against Cedar Rapids Washington, the first of two home games the Bulldogs must win to earn a trip to state. "I told the guys that it's just another game. We don't have to blow it up to be this big thing. If we do that, we get to a point where we put ourselves out of our normal routine.

"We just have to approach it like a normal game, don't put any extra pressure on ourselves and control the things we can control. That's all we can do."

Ottumwa, 28-9 this season, has certainly put themselves in position to be very confident heading into this postseason. The Bulldogs won a share of the CIML Metro conference title, winning their first 18 conference games, and have knocked off top-10 teams like Waukee and Urbandale on the road proving they can compete and beat the elite teams in Class 4A.

The Bulldogs are battling recent history, however, of early postseason exits. Ottumwa has lost four consecutive postseason games, including losses in the last two home substate games in 2018 and 2019.

"The biggest challenge for us is going to be to get our bats going," Ottumwa senior Trae Swartz said. "We had a bit of a struggle in the past couple games last week. (Wednesday) night (against Southeast Polk) was definitely a confidence boost for us. I don't think it's a pressure thing for us. If we do our own thing, play our own way and don't play anyone else's game, we're going to be good."

That mindset, according to Jaeger, is what truly might make the difference in the Bulldogs getting through substate play.

"It seems like the guys are in the right place mentally. We just need to keep them right there going into Friday," Jaeger said. "It's just a confidence factor this group has about them. Every group carries themselves a little bit different.

"These guys are hungry. They've been putting in a lot of extra work. They've been asking for extra work. That's a true sign to me that they're not ready to be done. There have been some years where you could tell that a team is ready to be done. The true sign of our success throughout this season has been we've got a group of kids that want to make it to Iowa City. If we don't, a lot of hearts will be hurting. That's on them. They're a hungry group that has to do the work. They're ready to except that challenge."

One other factor that might give Ottumwa the winning edge in postseason play is the balance the Bulldogs have shown as a complete team, posting the fourth-best run differential in Class 4A having outscored their opponents by a combined 198 runs. Ottumwa has also flashed plenty of power this season, posting the fifth-most home runs in 4A with 22 entering Wednesday final regular season doubleheader.

Swartz made it 23 home runs this season, moving within one round-tripper of joining OHS teammates Jesus Jaime and Mitch Wood with seven homers this season. Swartz's career-best sixth homer this season was a no-doubter, marking the second time this season that Swartz has stared down a long ball flipping the bat on a ball that traveled almost 400 feet.

"It's definitely the furthest run I've ever hit," Swartz said of Wednesday's blast. "It's a really good feeling knowing you've barreled one up and it's really taken off."

Ottumwa's pitching depth was also on full display Wednesday in the regular-season finale. Adam Denniston, Jackson Saunders and Thomas Mitchell combined to pitch a three-hit shutout of Southeast Polk in a 2-0 win to open the doubleheader while Julian Moore and Maxwell Thomason came on in game two to pitch a pair of scoreless innings, getting help from right fielder Blaze Rominger who threw out a runner at the plate in the seventh inning as the Bulldogs cut a 7-0 deficit down to 7-4 late in the final game of the regular season.

"It's all about taking a clear mind into the postseason," Denniston said. "We've just got to take it one game at a time. We just have to play like we play. If we do that, we can do it."