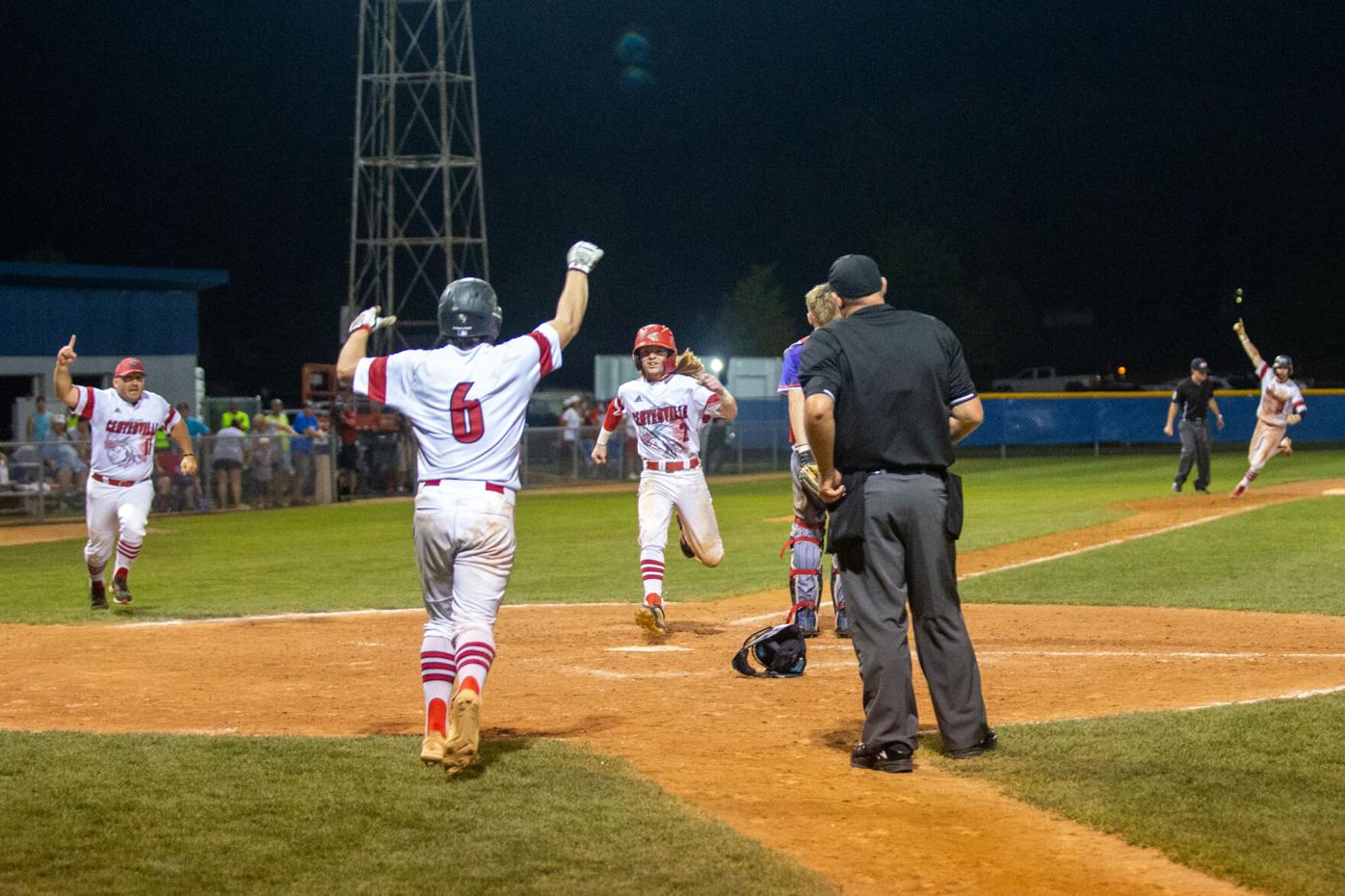 Centerville Big Reds junior Kade Mosley (2) crosses the plate for the walkoff run in the class 2A state semifinal game between the Centerville Big Reds and the Camanche Indians at Merchants Park in Carroll, Iowa on Wednesday, July 28, 2021. Centerville won 12-11 in eight innings to advance to the state championship game against No. 1-seeded Van Meter. 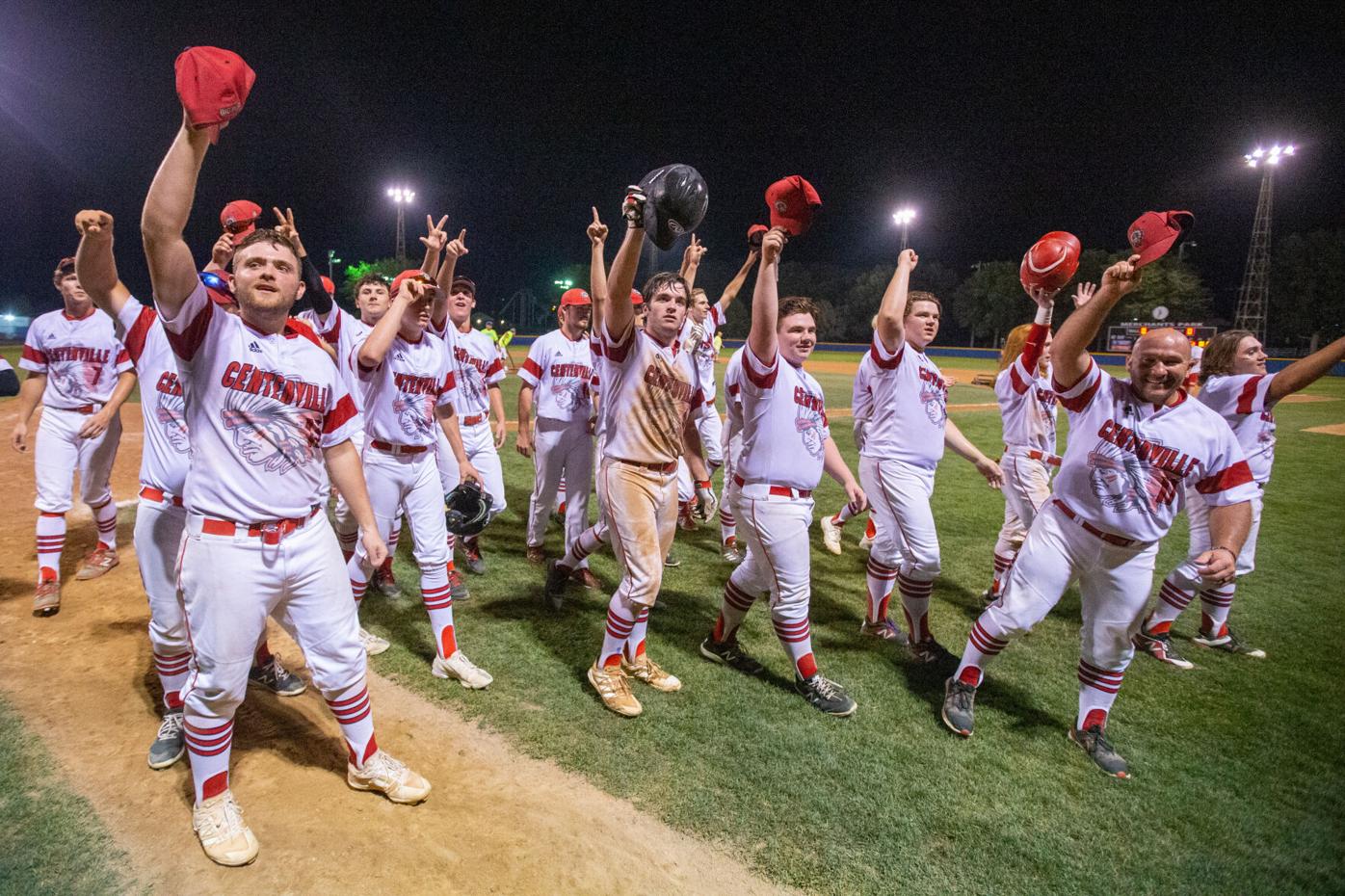 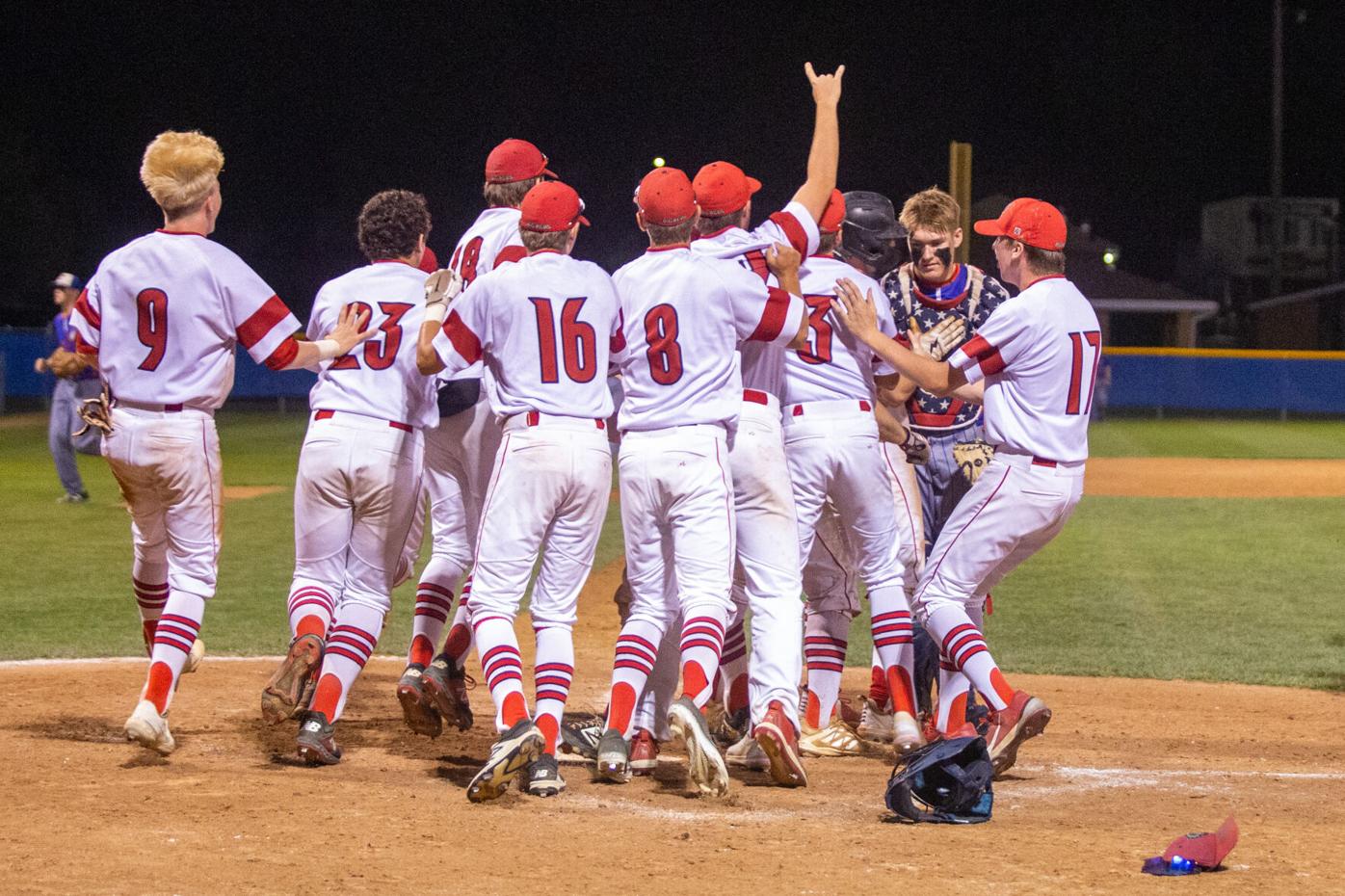 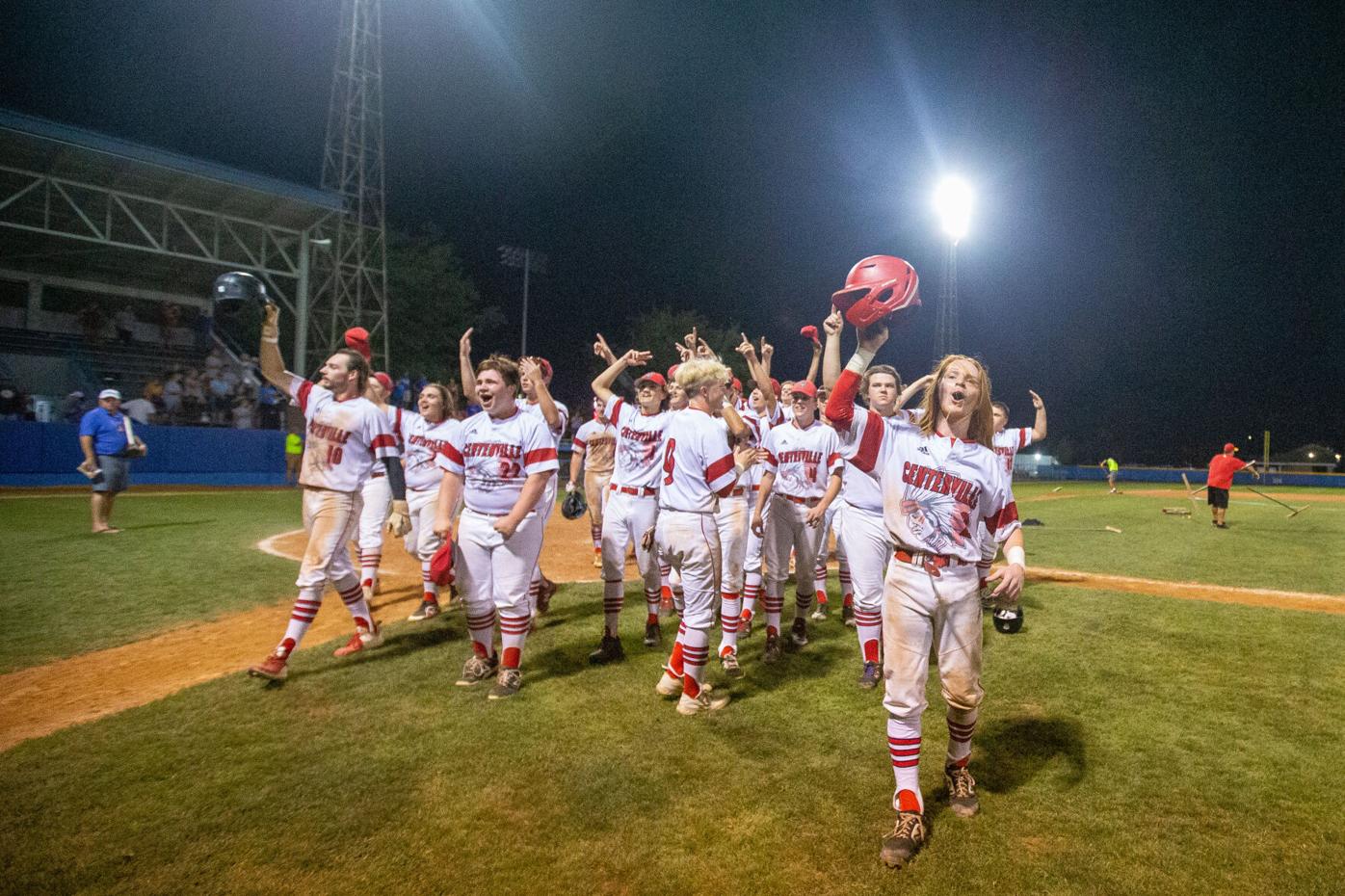 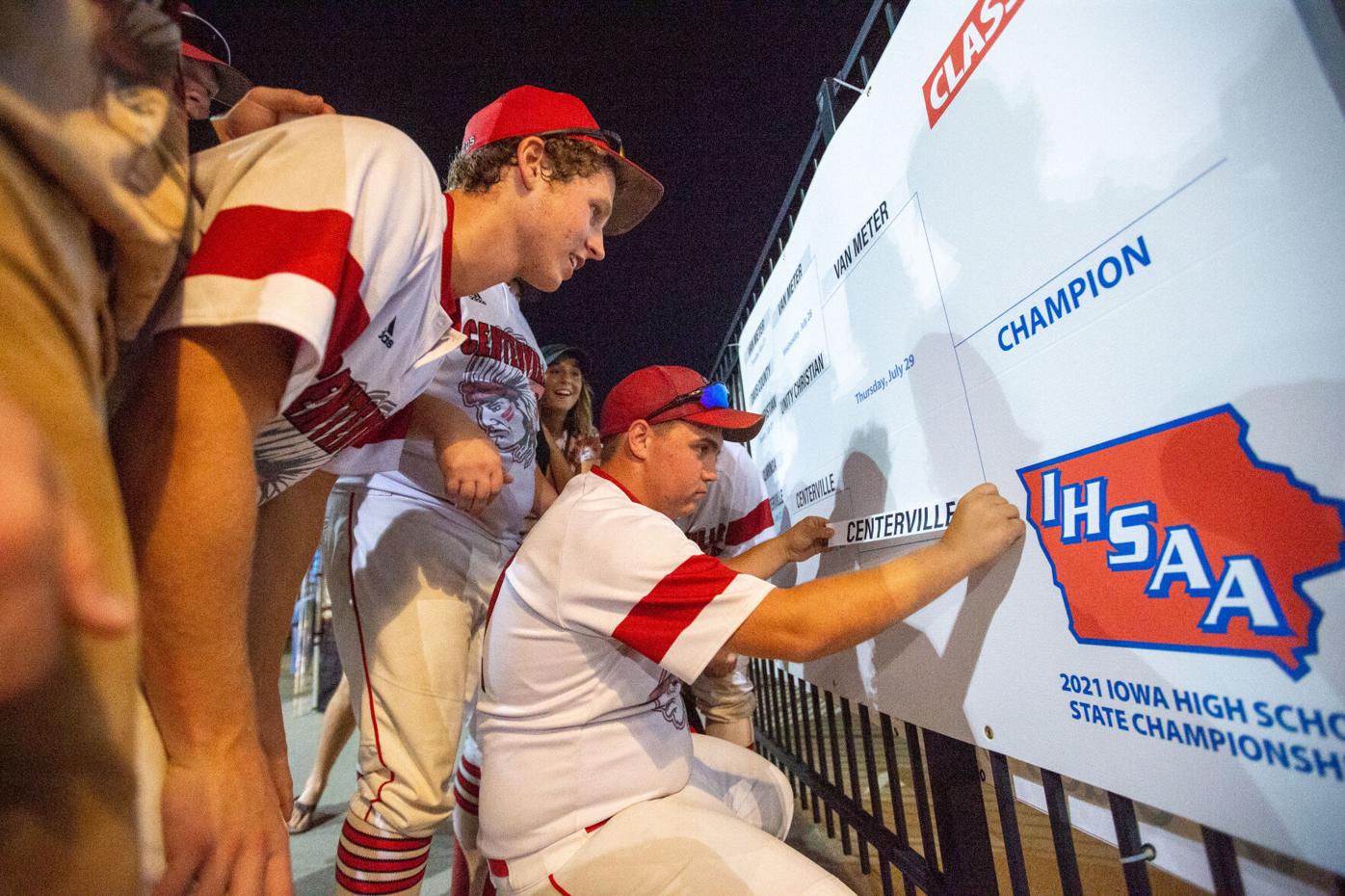 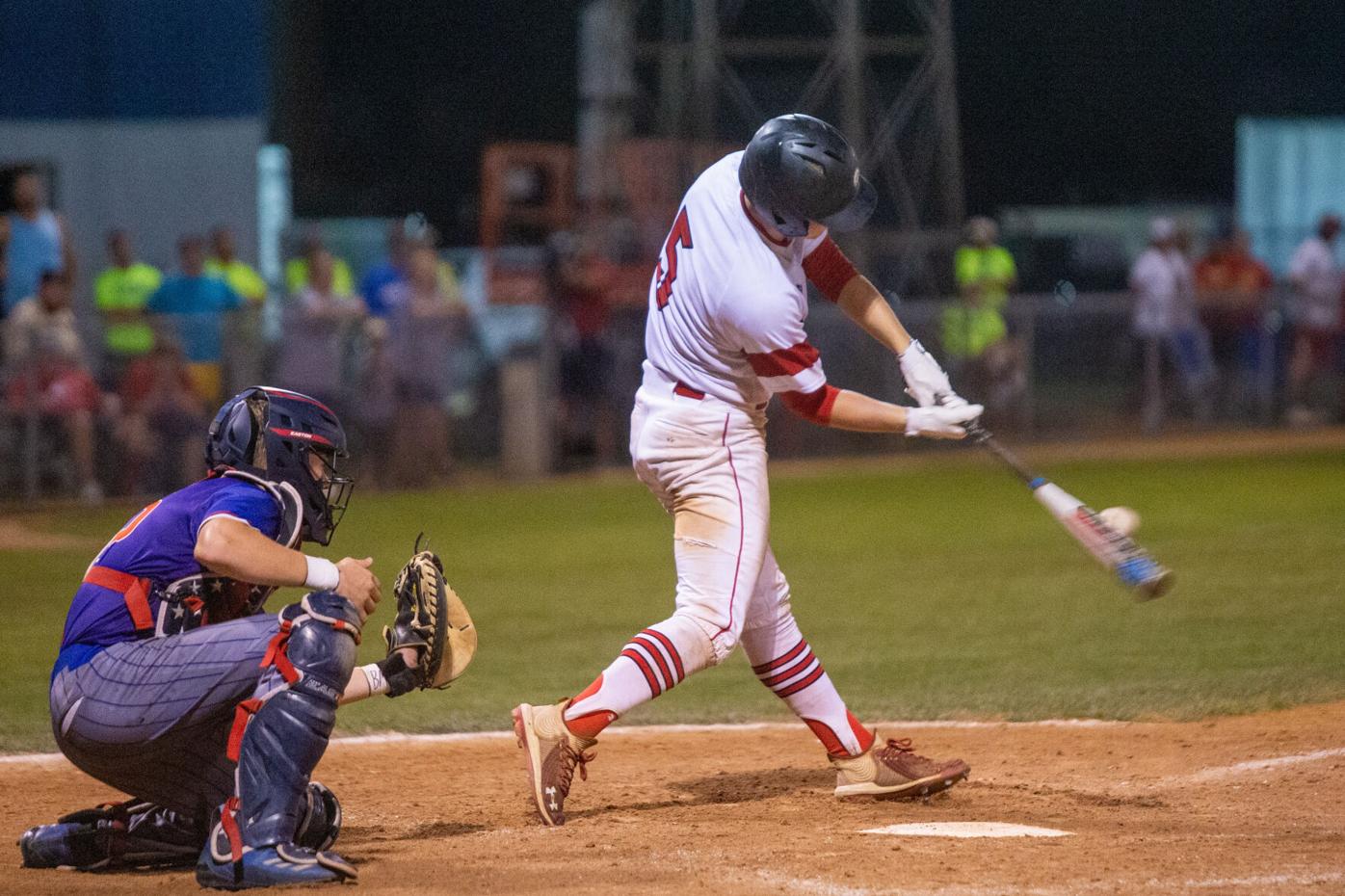 Centerville Big Reds senior Merrick Mathews (5) makes contact for a walk-off hit during the class 2A state semifinal game between the Centerville Big Reds and the Camanche Indians at Merchants Park in Carroll, Iowa on Wednesday, July 28, 2021. Centerville won 12-11 in eight innings to advance to the state championship game against No. 1-seeded Van Meter.

Centerville Big Reds junior Kade Mosley (2) crosses the plate for the walkoff run in the class 2A state semifinal game between the Centerville Big Reds and the Camanche Indians at Merchants Park in Carroll, Iowa on Wednesday, July 28, 2021. Centerville won 12-11 in eight innings to advance to the state championship game against No. 1-seeded Van Meter.

Centerville Big Reds senior Merrick Mathews (5) makes contact for a walk-off hit during the class 2A state semifinal game between the Centerville Big Reds and the Camanche Indians at Merchants Park in Carroll, Iowa on Wednesday, July 28, 2021. Centerville won 12-11 in eight innings to advance to the state championship game against No. 1-seeded Van Meter.

CARROLL — Centerville senior Brady Kauzlarich knew it was a mistake to intentionally walk him to bring Merrick Mathews to the plate.

The Big Reds had clawed their way back from a 10-3 deficit to send the 2A state semifinal into extra innings tied at 11-11 with a ticket to the 2A state championship on the line. And they had just the man they wanted at the plate with a chance to walk it off.

Mathews, Centerville's season leader in base hits heading into Wednesday night, delivered the biggest hit of his Big Red career, roping a double down the left field line to send Kade Mosley home high stepping and screaming to walk-off Camanche and send Centerville to the 2A state championship.

"Amazing. That was the greatest thing I've ever seen," Kauzlarich said. "When they walked me I was like, 'That was probably the biggest mistake of your life.'

"If I'm being honest I thought he was going to hit the softball field back there."

But it took one heck of a fight to get to the jubilation of the walk-off victory. But Centerville head coach Ryan Hodges said that's how the Big Reds have operated this season: They're never out of a fight.

Camanche led Centerville 10-3 heading into the bottom of the fifth inning thanks to plenty of mistakes by the Big Reds. Centerville came away with a win but committed six errors, threw nine wild pitches and hit three batters. The Indians scored five of their first 10 runs off of wild pitches or past balls. When it's this late in the postseason, Hodges said errors and free bases will hurt you most of the time. But Centerville didn't flinch despite the self-inflicted wounds during the opening five innings.

Hodges said the nerves were showing early on for Centerville but he could tell his group wasn't about to quit. Not when they were this close to the state title game. After the fifth ended, Hodges said he could see his team had a fire in their eyes again. And it wouldn't be extinguished the rest of the night.

"They showed me something tonight," Hodges said. "I could see about halfway through they got that fire back in their eyes. They battle all the time and they're never out of anything."

"It was crazy. Lots of fun. It's a shame, both of us had opportunities to put each other away but I'm proud of our kids tonight."

Centerville would plate three runs in the fifth and sixth innings thanks to RBIs from Mathews, Korey Shondel, Myles Clawson and Kellen Johnson. The Big Reds were suddenly right back in it, down 10-9 entering the seventh inning.

Kauzlarich stepped up to the plate in the bottom of the seventh with a runner on first and he knew he had to come up big, especially after getting a big whiff of the smelling salts in the dugout before his at-bat.

"We have smelling salts in the dugout right before I went up to bat and Kellen Johnson goes, 'Brady, you gotta give it a sniff.' And I go, 'No', but he goes 'For me? And so I took a big whiff and I walked on up there and I was like 'I'm the man, I'm going to to do it,'" Kauzlarich said.

"That right there, that's the championship game no matter what. That was probably the best baseball game that's going to be played in Merchant's Park."

Kauzlarich sent a deep fly ball to center field over the head of the Indians' outfielders, sending Kauzlarich and Mason Bauman sprinting around the bases. Hodges gave Kauzlarich the green light and the senior slid head first home and rose to his feet with his teammates mobbing him at the plate with the umpire urging the Big Reds to get back in the dugout with extra innings still to be played. The inside-the-park home-run made it 11-11 going to extras.

Mathews, the eventual hero of the night for the Big Reds, finished 3-4 with three RBIs and will get the ball to start the 2A state final for the Big Reds according to Hodges.

Hodges has coached Mathews for the Big Reds since he was an eighth-grader and recalled his struggles in his first full season, until it came to the state tournament. Mathews slashed much better when the postseason's biggest stage arrived when he was younger and Hodges said his big showing on Wednesday was nothing different.

"When the lights get brighter it seems like his bat gets hotter," Hodges said. "Nothing phases the kid."

Mathews couldn't describe what his instant reaction was to his walk-off, but knew the Big Reds weren't going to let the moment get past them. It was just his time to shine.

"It was crazy. I couldn't ask for it to happen any other way," Mathews said. "I had no doubt this could happen because we've got a lot of fight in us. We're not ready to go home yet and we're going to keep fighting until the end."

In total, the Indians and Big Reds played for three hours and 13 minutes and combined for 32 hits, eight errors and 33 runs to make a memorable 2A state semifinal.

The magic of the epic comeback in the semifinal contest could not carry over to Thursday afternoon's state championship game with second-ranked Van Meter. David Pettit collected four hits and drove in four runs while allowing just four hits over seven innings on the mound, leading the Bulldogs back from an early two-run deficit to earn a 10-2 win over the Big Reds, winning a third straight state championship.

Centerville wraps up the season with a final record of 21-15, advancing to state for the fourth time in five years.