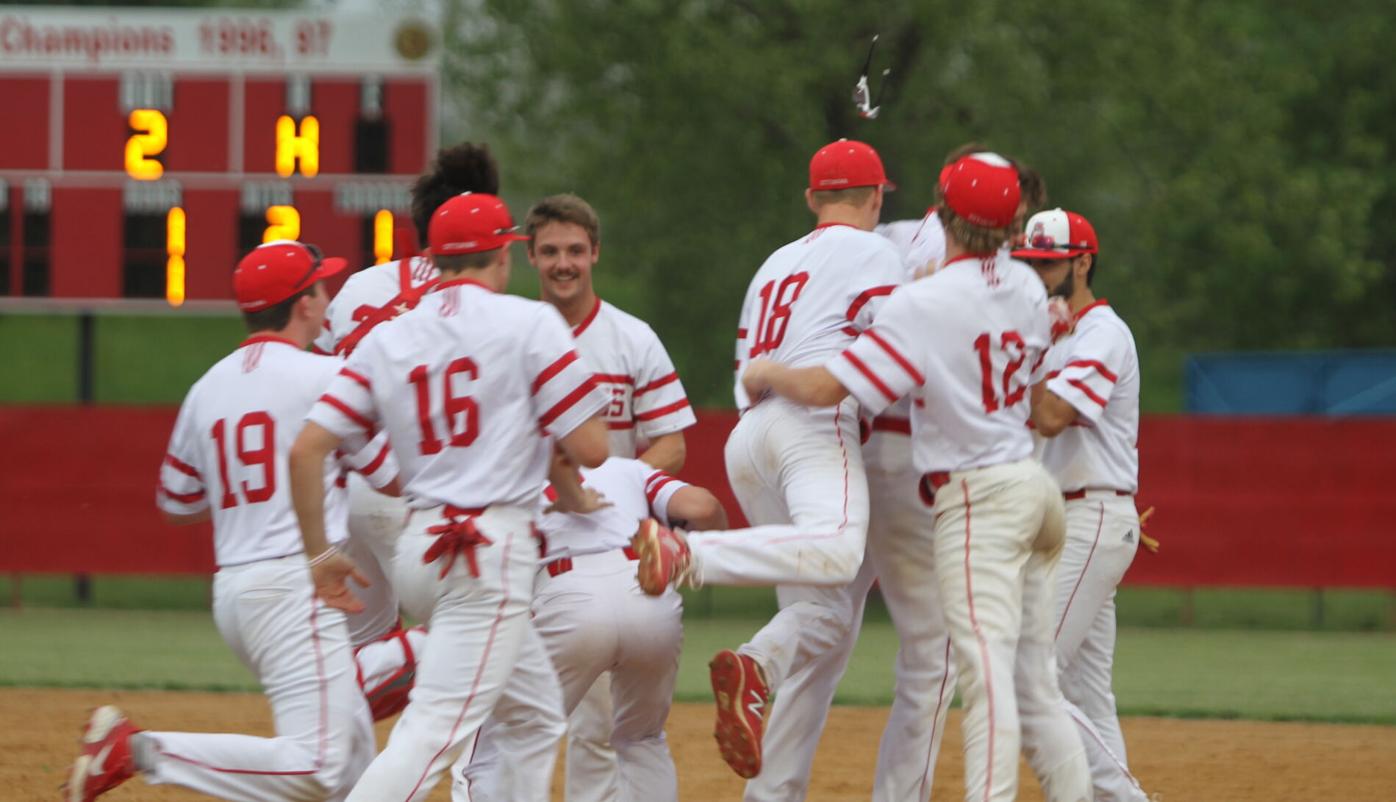 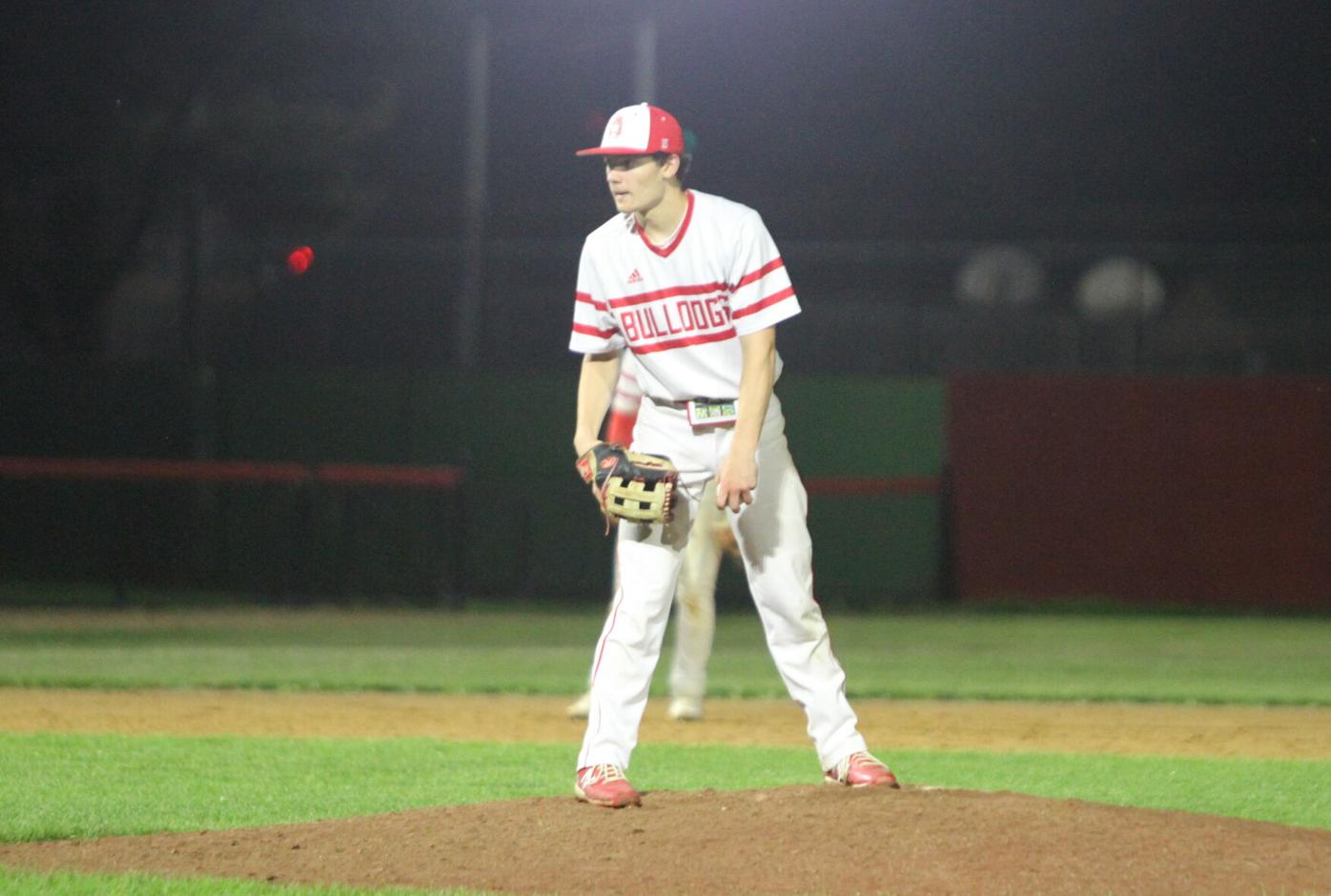 Ottumwa sophomore Tanner Schark stands on the mound in game two of the Bulldogs' double-header against Ankeny Centennial on May 24.

OTTUMWA — Confidence was riding high for the Ottumwa Bulldogs at Legion Memorial Field Monday evening. And for good reason.

The Bulldogs opened the 2020-21 season on their home field with two wins over the Ankeny Centennial Jaguars in a double-header behind quality pitching, timely hitting and a 'refreshing' approach at the plate. In game one, Ottumwa beat the Jaguars 2-1. In the second game of the night, Ottumwa won 1-0.

Ottumwa head coach John Jaeger said in years past, it's taken more time than he would have hoped for to see the team find its legs and become confident in itself. It only took the Bulldogs two games to find it.

"This is kind of that boost that we need to say, 'Hey, we're here and we're here to play this year,' and I think our kids are ready to rock 'n' roll," Jaeger said.

Ottumwa kept right on rolling on the road Wednesday night at Oskaloosa, scoring five runs in the very first inning on the way to a 15-1 win over the Indians. Blaze Rominger doubled and scored on a pair of wild pitches ahead of consecutive two-out run-scoring hits by Trae Swartz and Maxwell Thomason to jump start the Bulldogs to a 3-0 start to the season.

Game one of the season showed the calm, cool, collected attitude the Bulldogs were searching for right out of the gate, with starting pitcher Rion Slack finding himself in a bases-loaded jam. But the senior didn't waiver and got out of the inning unscathed.

Jaeger said the team worked in more live-ball scenarios in the off-season and adjusted how his pitchers attacked on the mound, with it all coming together in an impressive start to the Bulldogs' season.

Ottumwa got itself an early lead thanks to a leadoff triple from Adam Denniston in the top of the second inning. Max Thomason followed up Denniston's knock with an RBI chopper to Ankeny Centennial's first baseman.

The Jaguars would eventually tie things up after an Ottumwa infield error in the top half of the fourth inning.

The game stayed tied until the bottom of the seventh. That's when the confidence broke through for the Bulldogs.

After two quick outs at the plate, senior third basemen Jesus Jaime stepped up to bat with Ottumwa down to its last out before the game would be forced into extras. Jaime shot a single up the middle past a diving Jaguars shortstop.

Mitch Wood, who would have three hits against Oskaloosa on Wednesday, kept the train moving looping a single past Ankeny Centennial's third baseman, putting two runners on for Adam Greiner.

Greiner didn't wait too long to end it, hitting a line drive straight over the second baseman's head, sending Jaime home and walking it off for the Bulldogs to open the season with a dramatic 2-1 win.

But there was chatter in the dugout before Greiner even stepped up to the plate about what might happen.

"We were joking in the dugout right before I went up there to bat and we were kind of like running through scenarios and one of the scenarios we ran through was a walk-off single from me," Greiner said.

Jaeger trusted his lineup to get the job done in crunch time and had his intuition pay off with Greiner's game-winner.

It all goes back to his high-confidence level with the top of the Bulldogs' lineup.

Flash forward to game two and the confidence carried over for Ottumwa in the form of its pitching rotation. Colton McKinnon started for the Bulldogs, bringing higher velocity than what Ankeny Centennial was used to seeing previously. McKinnon pitched four innings, giving up no runs.

Jackson Saunders came in for relief in the top of the fifth, but was pulled after walking multiple batters and losing his command.

"[Schark's] only a sophomore but he did not carry himself at all [like one] in the field or at the plate," Jaeger said. "I had complete confidence and that's why we threw him out there because of the way he's handled things."

The young pitcher wasn't shy about where he was mentally when his number was called in that critical spot.

"Just a lot of confidence, that's all I had. I had confidence in all three pitches and I just had a ton of confidence walking out there actually," Schark said.

Greiner played a role in Ottumwa's first road game, driving in Jesus Jaime in the first inning on a single to center before scoring one of Ottumwa's three runs in the first with two outs. Greiner doubled in Jaime during a three-run rally for the Bulldogs in the fifth, opening a nine-run lead over the Indians.

Adam Denniston provided the Bulldogs with another stellar effort on the mound, scattering six hits over five innings while striking out six batters allowing only a first-inning run to the Indians. Ottumwa put the game out of reach in the sixth, scoring five more runs taking advantage of an Osky defense that would ultimately allow nine unearned runs on six errors.

With a confident offense and a deep pitching staff, what does a start like this do for this year's Bulldogs? It leaves the team feeling energized about what's to come.