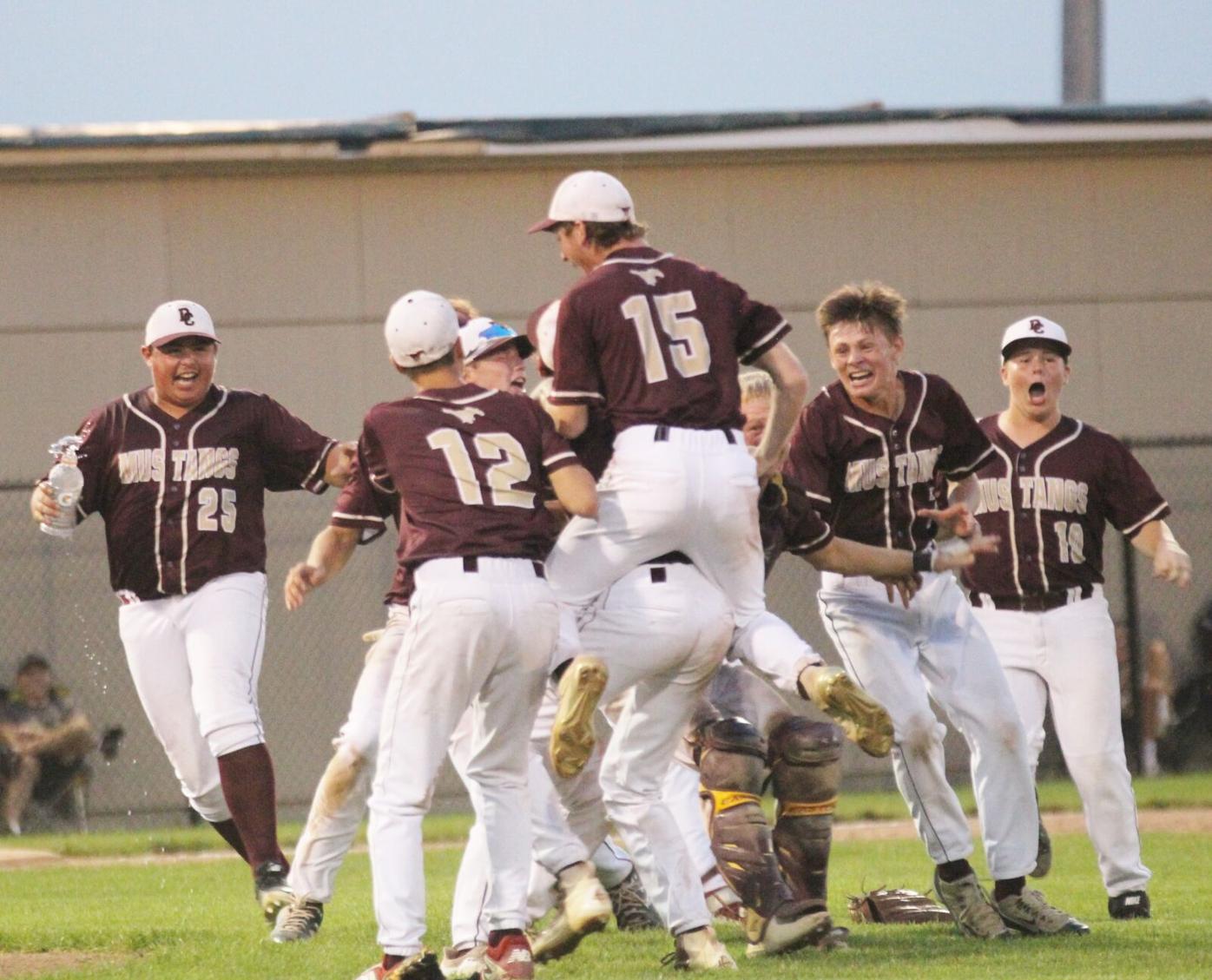 Davis County High School baseball players rush onto Sojka Field in Washington on Tuesday night after clinching a 7-4 win over fourth-ranked Mid-Prairie, earning a berth in the Class 2A state baseball tournament. 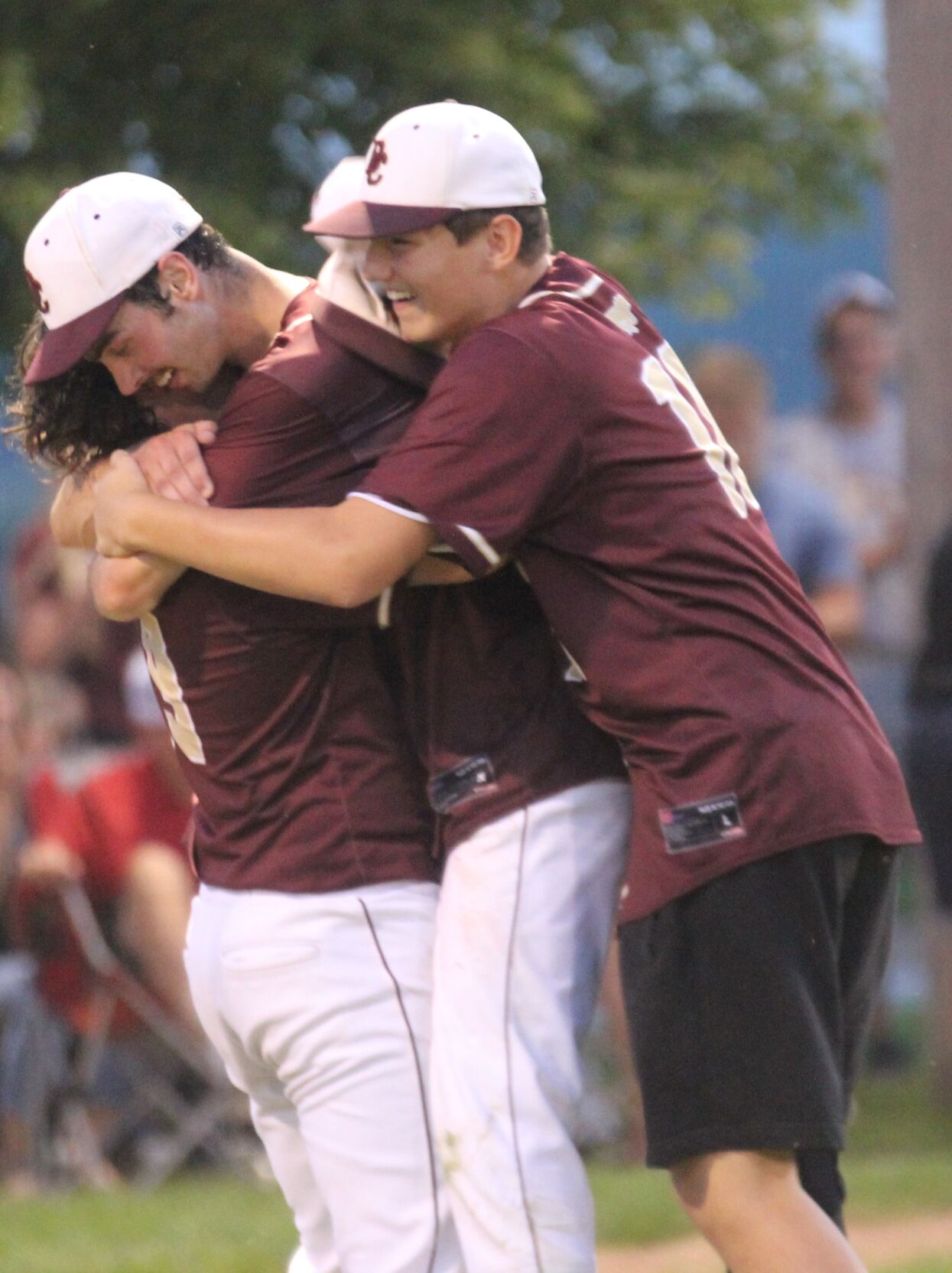 Davis County teammates (from left to right) Gavin McCall, Clay Collier and Noah Zmolek share in a group hug as part of the postgame celebration for the Mustang baseball team after winning, 7-4, over fourth-ranked Mid-Prairie in the Class 2A, Substate 6 championship game at Sojka Field in Washington. 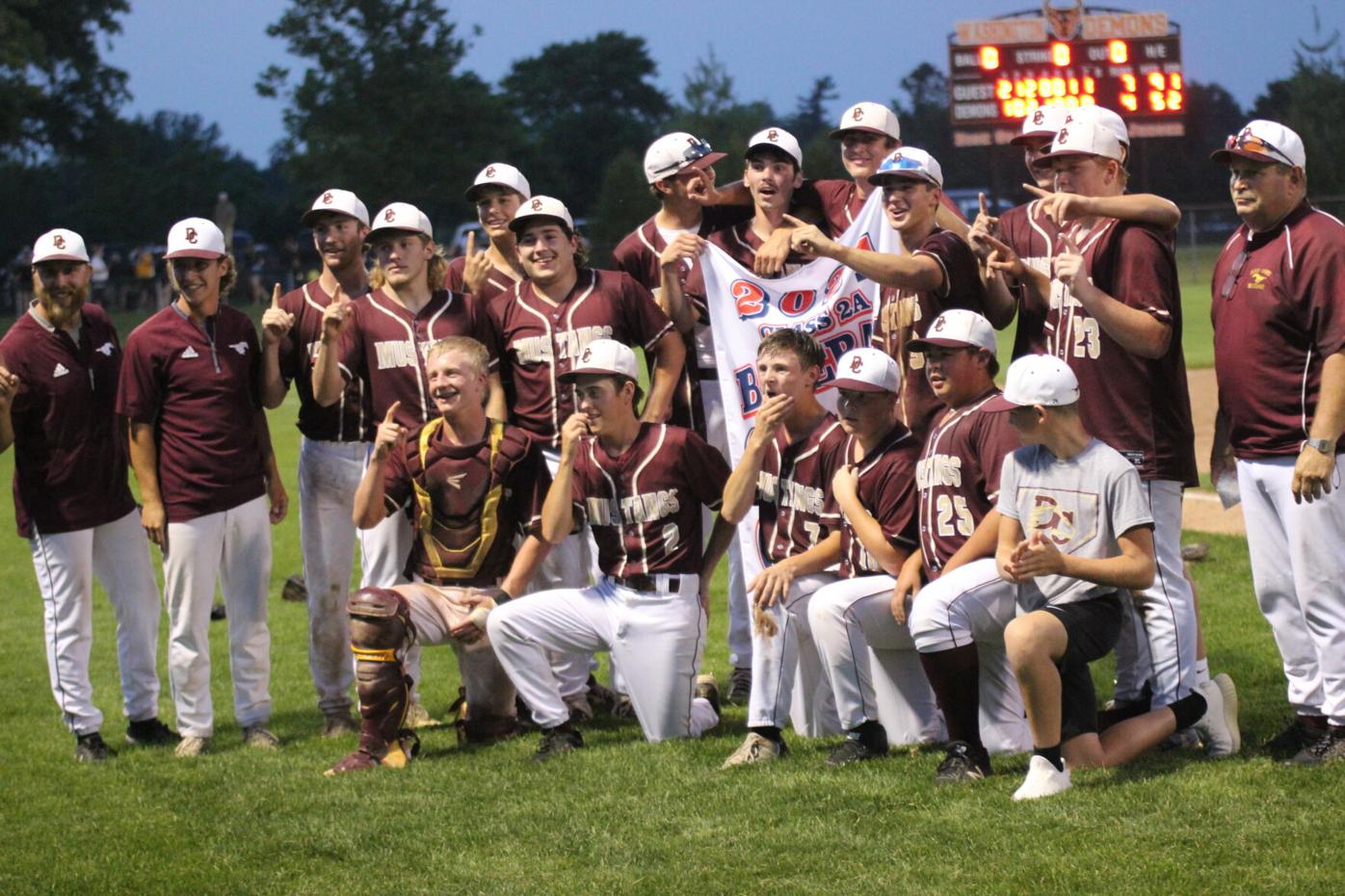 The Davis County High School baseball team celebrates with their substate championship banner on Tuesday night at Sojka Field in Washington after winning the Class 2A, Substate 6 title with a 7-4 win over fourth-ranked Mid-Prairie. 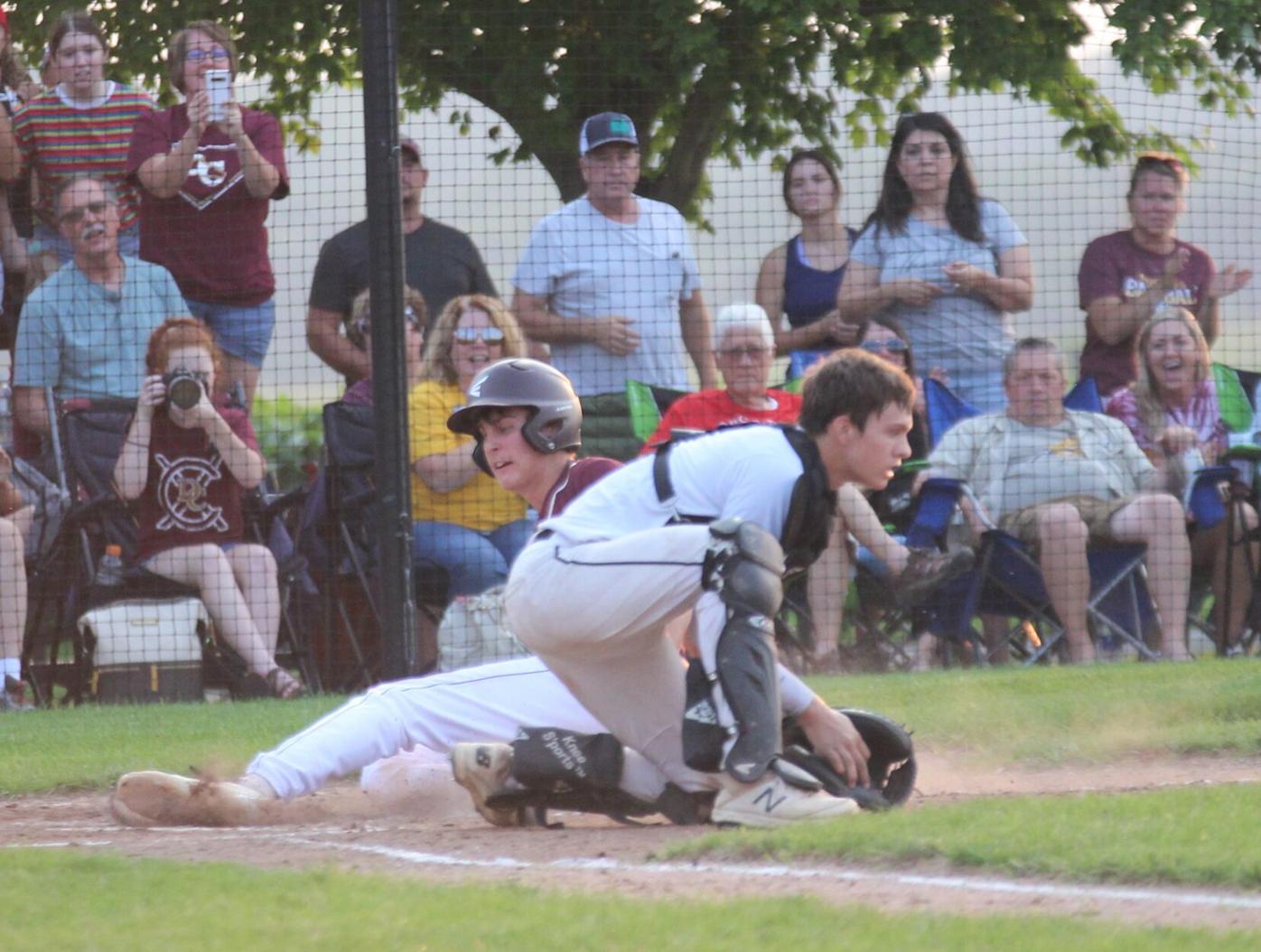 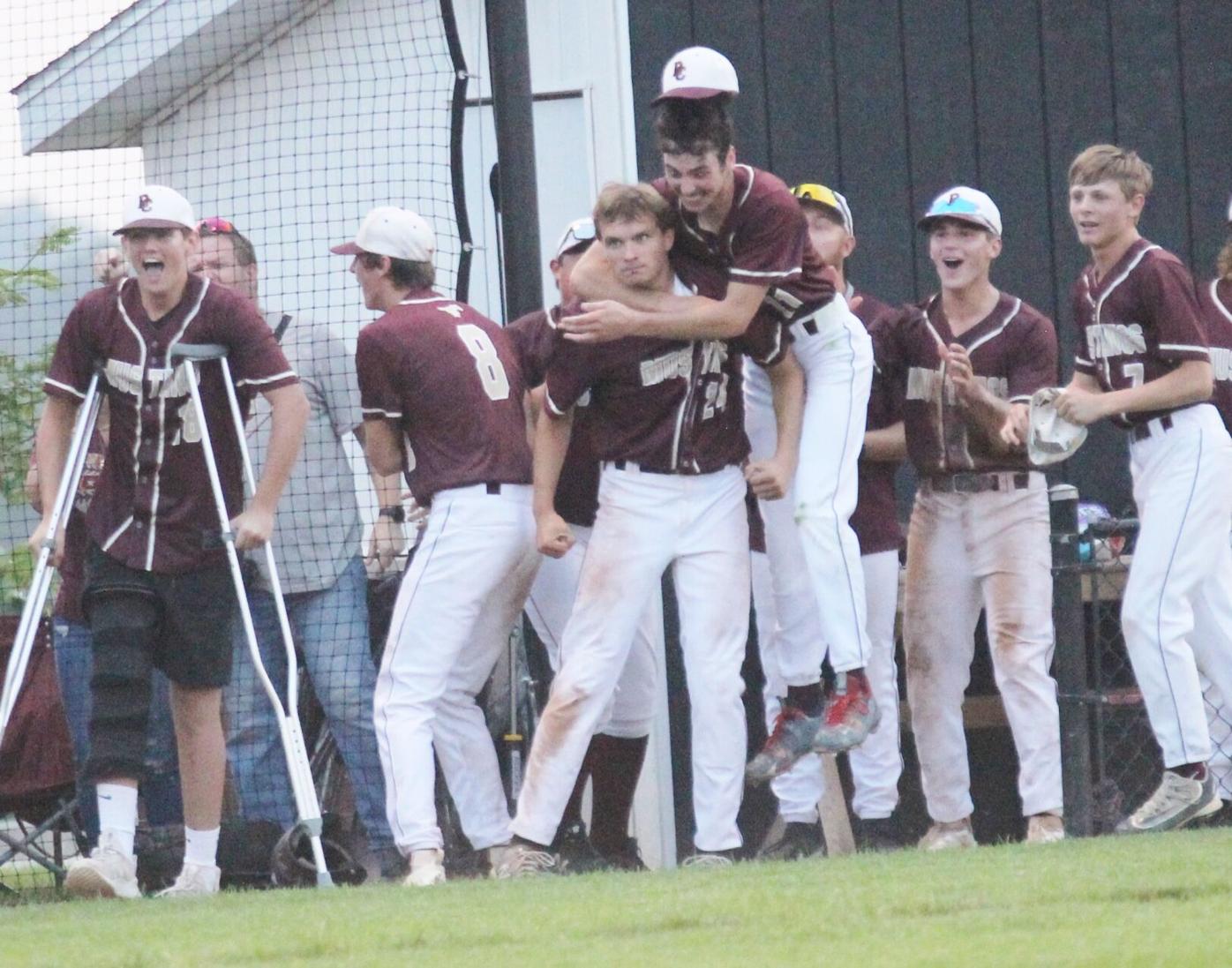 Davis County High School baseball players rush onto Sojka Field in Washington on Tuesday night after clinching a 7-4 win over fourth-ranked Mid-Prairie, earning a berth in the Class 2A state baseball tournament.

Davis County teammates (from left to right) Gavin McCall, Clay Collier and Noah Zmolek share in a group hug as part of the postgame celebration for the Mustang baseball team after winning, 7-4, over fourth-ranked Mid-Prairie in the Class 2A, Substate 6 championship game at Sojka Field in Washington.

The Davis County High School baseball team celebrates with their substate championship banner on Tuesday night at Sojka Field in Washington after winning the Class 2A, Substate 6 title with a 7-4 win over fourth-ranked Mid-Prairie.

WASHINGTON – Carson Maeder figured he was going to be thrown out anyway.

"So I just ran as hard as I could," Maeder said. "It happened to be a little bit my way and I knocked the ball out."

It was one of several plays that went Davis County's way in the biggest game of the season. From three runs that scored on close plays at the plate to five wild pitches in the first two innings by Mid-Prairie senior pitcher Aidan Rath that helped the Mustangs jump out to an early lead.

Ultimately, all the little plays that went Davis County's way led to the biggest win of the season. The Mustangs advanced to the state for the first time since 2015 with a 7-4 win over the fourth-ranked Golden Hawks, clinching the Class 2A, Substate 6 ticket to play next week at Merchants Park in Carroll.

"We've been trying to push the right buttons all season. Things are really clicking right now," Davis County head baseball coach Todd White said. "The kids are really enjoying playing for each other. The coaches. The whole nine yards. Everything is really gelling together."

Davis County continued a postseason turnaround that has been quite unexpected. The Mustangs closed out the regular season losing nine of 11 games, including three in a row at home with a 12-7 loss to Moravia at the West Complex leaving White searching for answers heading into district tournament play.

We just need to go back to work and do the best we can do," White said after that loss just two weeks earlier. "That's about where we're at."

Where Davis County will be just three after that loss is at Merchants Park in Carroll playing for the fifth time in program history, all under the guidance of White, including the run to the 2011 Class 2A state championship. Those previous four substate championship teams had a combined overall record of 135-16.

This Mustang state qualifier, however, will enter state tournament play with a record of 15-18. Unlike previous Davis County teams that competed at state, the 2021 squad will have to play the role of underdogs in every game they play from here on out as the eighth seed in the eight-team tournament, starting with a match-up against second-ranked Van Meter (28-7) next Tuesday afternoon at approximately 1:30 p.m.

Of course, if being an underdog could stop Davis County, the postseason would have ended much earlier for the Mustangs. After rallying in the seventh inning and winning in the ninth to open district tournament play against Central Lee, Davis County won consecutive road games at Van Buren County and Eddyville-Blakesburg-Fremont just to make it into Tuesday's substate final.

"I'm not sure I can compare this team to those teams in the past that have qualified for state," White joked. "They're just a great group of kids. They really are. That's might be the most comparable thing."

The Mustangs made their presence felt right from the start, loudly cheering as Rath missed the strike zone on eight of his first 10 pitches walking Clay Collier and Dawson Townsend. The noise from the Mustang dugout only got louder as pitches got past Bowlin, allowing Collier to move up and come home with the first run of the game.

"In all the past district games, things have just felt like they've been going out way," Davis County senior Noah Zmolek said. "It's great when you can feed off the crowd's energy and the energy from the dugout. It just keeps us all going."

Zmolek kept the Mustangs going with a clutch two-out RBI single later in the first, bringing home Townsend to give Davis County a 2-0 lead. Rath continued to struggle with his command in the second inning, hitting Easton White with a pitch before two more wild pitches allowed the Mustang junior to reach third, setting up Davis County's third run on a sacrifice fly to center by Gavin McCall that allowed White to come home just ahead of a throw from center field.

"The guys are picking each other up. They're spending the time together and they're talking to each other," White said. "It's quite a bit different from what it was. The guys feed off each other and they're playing with confidence. It's a lot of fun to watch."

Caedyn Glosser kept the momentum on Davis County's side, drilling a triple to deep right. Glosser would have been stranded, however, if not for the hustle of Zmolek who was able to reach safely after a ground ball was bobbled at short, allowing Glosser to score putting the Mustangs up 4-1.

"Everyone just played as a team. Everyone played for each other. No one played for themselves," Glosser said. "We knew we could pull this off. Coach White has always told us that a hot team in the playoffs is always going to win. We've been hot. It doesn't matter what our record was before."

Zmolek wasn't done in the third, stealing second base before coming home on the first of Maeder's two hits. Suddenly, Davis County had a 5-1 lead against the state's fourth-ranked team.

"There's definitely a different energy right now," Zmolek said. "Nobody is leaving anything back. We've had games throughout the season against Albia, Knoxville, EBF where we proved we could play like this. The difference is we also had those games like the ones against Moravia where we didn't show up. It shows how good a ballclub we are when we consistently bring that energy."

Justin Matheney picked up his second complete-game win on the mound for Davis County this postseason, beating Van Buren County in the district semifinals allowing just one run on five hits over seven innings to the Warriors. Matheney kept the Mustangs in front, making the pitches to strand six Mid-Prairie runners on with Zmolek helping the cause, tagging out Rath at third base for the second out of the opening frame before tagging Karson Grout for an inning-ending force out in the fourth after the Golden Hawks had cut Davis County's lead to 5-4.

"There's a lot of pressure in those situations," Matheney said. "It was just a matter of sticking together. It's  a great feeling when you've got a great team behind. It eases the pressure off and you can just focus on making your pitches."

Matheney would ultimately retire the final nine Golden Hawk batters, but the game was still up for grabs heading into the final two innings. That seemed to change, however, when Maeder made a sudden charge for home with one out on a relay throw to third that got loose.

"All I heard was Coach White yelling 'yes, yes.' About three-quarters of the way down, I saw the catcher jump up and I honestly thought I was done," Maeder said. "We've been really hot the past four games, but we've had that classic underdog mentality. We're playing with confidence, but we're playing humbly."