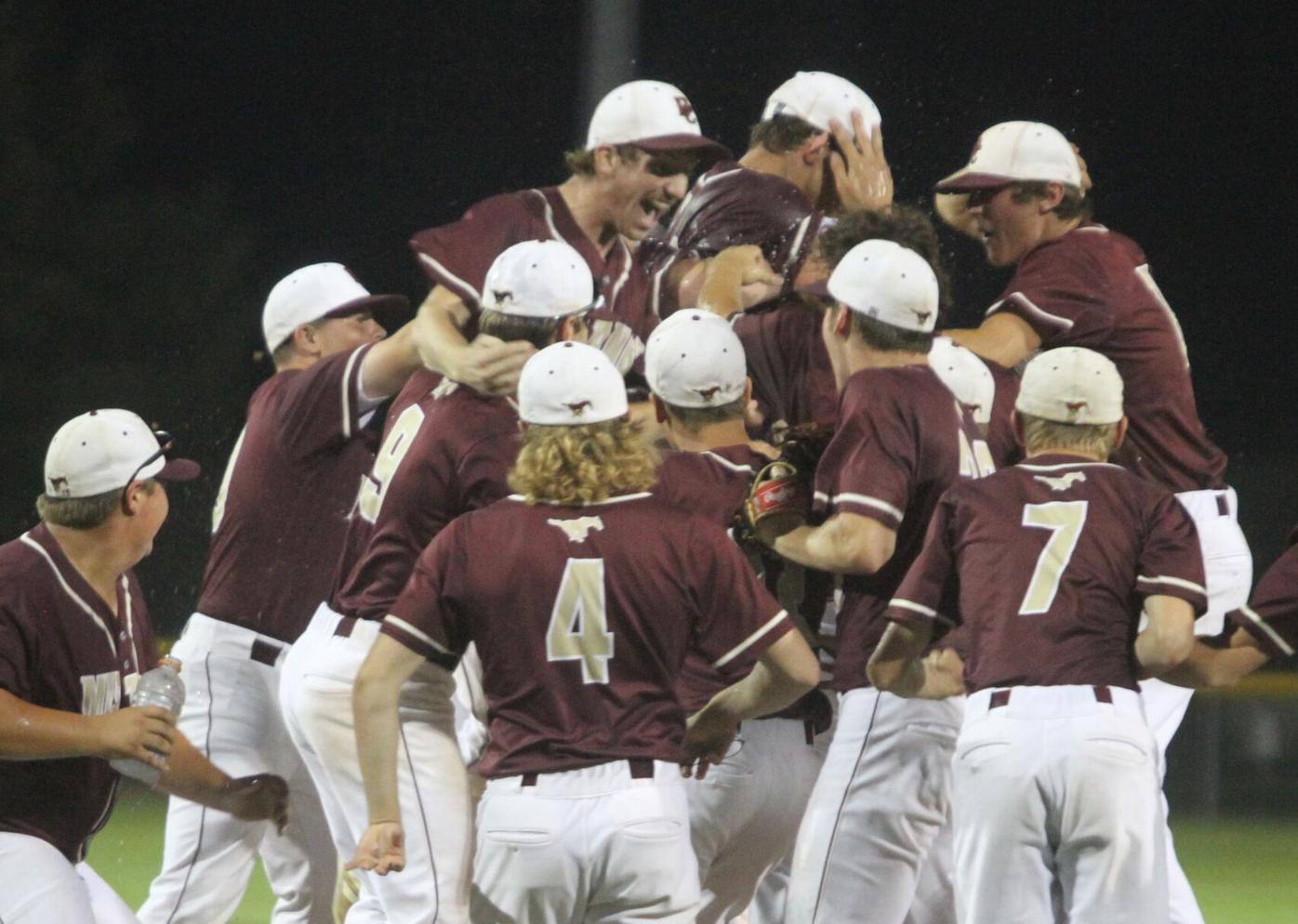 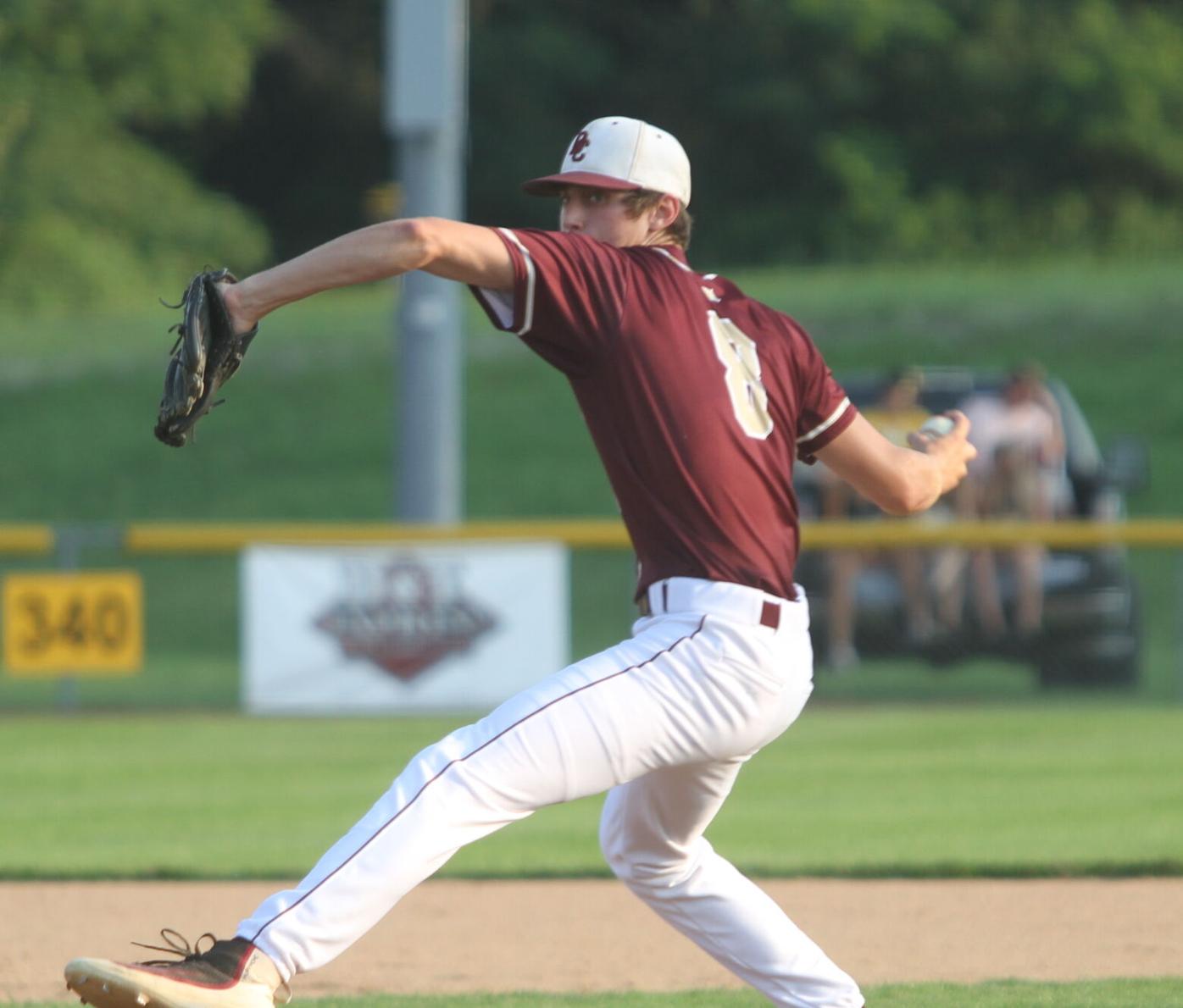 Davis County senior Noah Zmolek throws a pitch against the Eddyville-Blakesburg-Fremont Rockets in the 2A Substate 6 semifinal on Saturday.

EDDYVILLE — Dawson Townsend could finally catch his breath after a rollercoaster ride of a 2A Substate 6 semifinal between the Davis County Mustangs and Eddyville-Blakesburg-Fremont Rockets on Saturday night.

Townsend's smile and frequent exhales as the sweat was still fresh on his face felt warranted after the Mustangs prevailed over the Rockets after three lead changes and massive momentum shifts. The Mustangs would end up prevailing over their South Central rivals 5-4 and book a trip to the 2A Substate 6 final against Mid-Prairie on Tuesday.

Townsend, a junior catcher for Davis County, said as the game progressed everyone could feel the game was there for the taking. The Mustangs did what they had to do on a crazy night in Eddyville.

"It was crazy tonight," Townsend said as he held his substate regional medal. "We took the lead, they jumped ahead and we responded. Tensions were tight between the teams. There was lots of crap-talking going on and we pulled through when it mattered."

Davis County came out of the gates with momentum on its side, plating two runs in the top of the first inning thanks to RBIs from Dalton Reeves and Noah Zmolek. Eddyville would chip away as the Mustangs' lead throughout the first handful of innings. Davis County would build its lead to 3-2 entering the bottom of the fifth, but the Rockets had their chance to take over.

Eddyville would turn two straight walks to open the frame into two runs thanks to RBIs from Zach Leonard and Ethan Davis. EBF took its 4-3 lead into the sixth. Neither team scored in the sixth, giving the Mustangs one last chance in the top of the seventh to keep their season alive.

"The one thing we've been talking about is there's going to be momentum changes in these games and we had to figure out a way to get it back on our side," White said. "Our kids found a way tonight."

"The kids are starting to believe in one another."

The Mustangs would load the bases in the top of the seventh with no outs after two singles and one of six EBF errors in the game, leaving Easton White to tie the game at 4-4 after a sac fly to right field.

The winning run would end up scoring on a strange play in the EBF infield. During Gavin McCall's at-bat, Zmolek was caught in a rundown at third base and was eventually tagged out at third for the second out of the inning. But EBF third baseman Tanner Ray saw Carson Maeder halfway between third and second base and threw the ball to second base. Except, the ball ended up deep into right field on a throwing error.

Maeder would score from second on the error, giving Davis County its 5-4 lead and eventual win.

"I feel like our confidence is sky-high. I feel like we can do anything," Townsend said after the dramatic win.

EBF head coach Tom Hallgren said the loss will stick with the Rockets for a while, but it won't overshadow all they accomplished this season. After all, EBF won the South Central title and finished the year with a 26-7 record, the program's best since the 2010-11 season.

Saturday's loss was still very fresh for Hallgren to pinpoint what it will take for the Rockets to overcome their recent postseason demons, but said the self-committed mistakes hurt the Rockets when it mattered.

Davis County will head to the 2A Substate 6 final vs Mid-Prairie on Tuesday at Washington High School at 7 p.m. with a trip to state on the line.