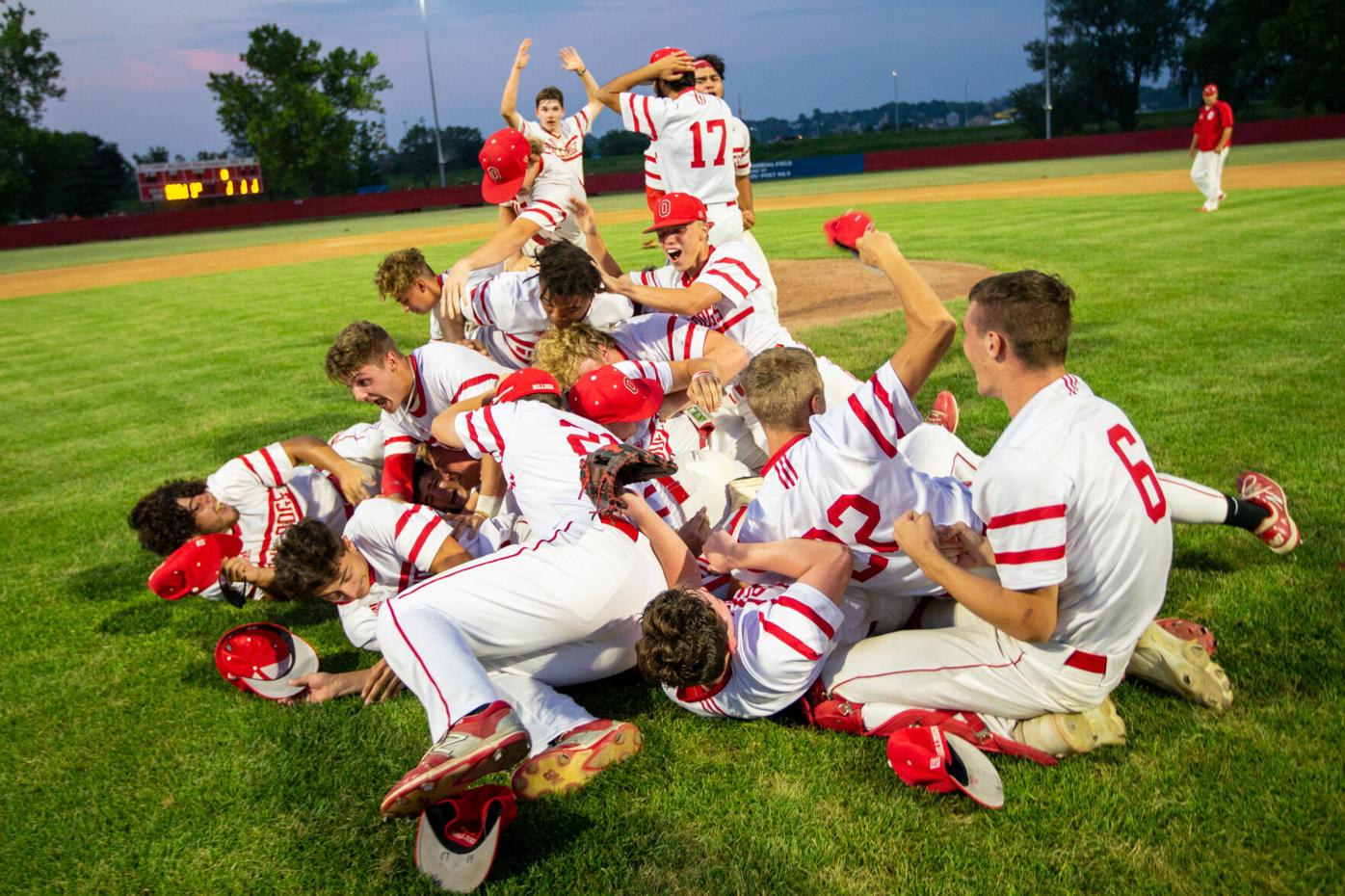 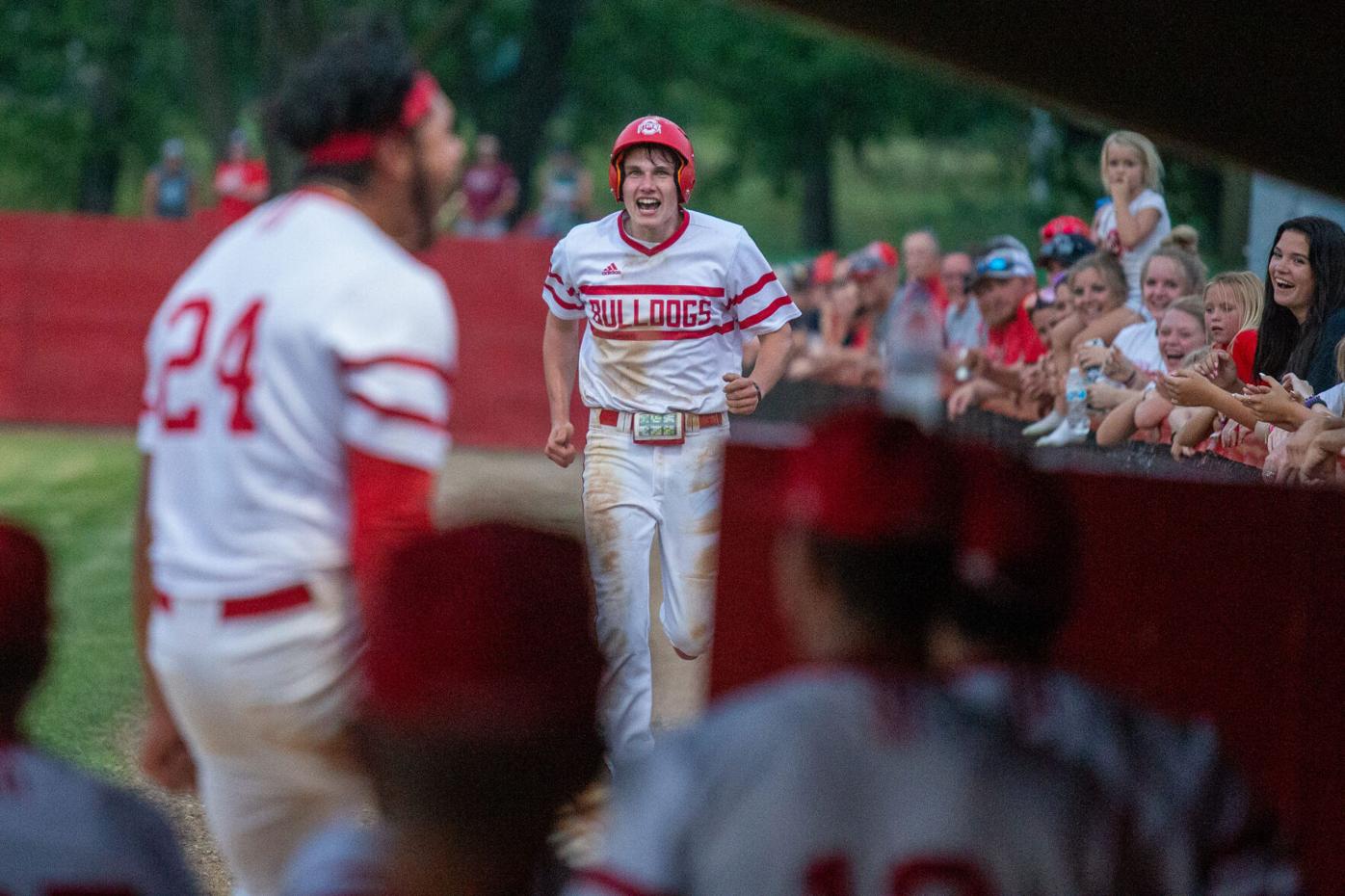 Ottumwa Bulldogs junior Adam Greiner (10) celebrates scoring the go-ahead run in the bottom of the sixth inning during the Class 4A Substate 6 Championship game between the Iowa City High Little Hawks and the Ottumwa Bulldogs at the Legion Memorial Field on Wednesday. 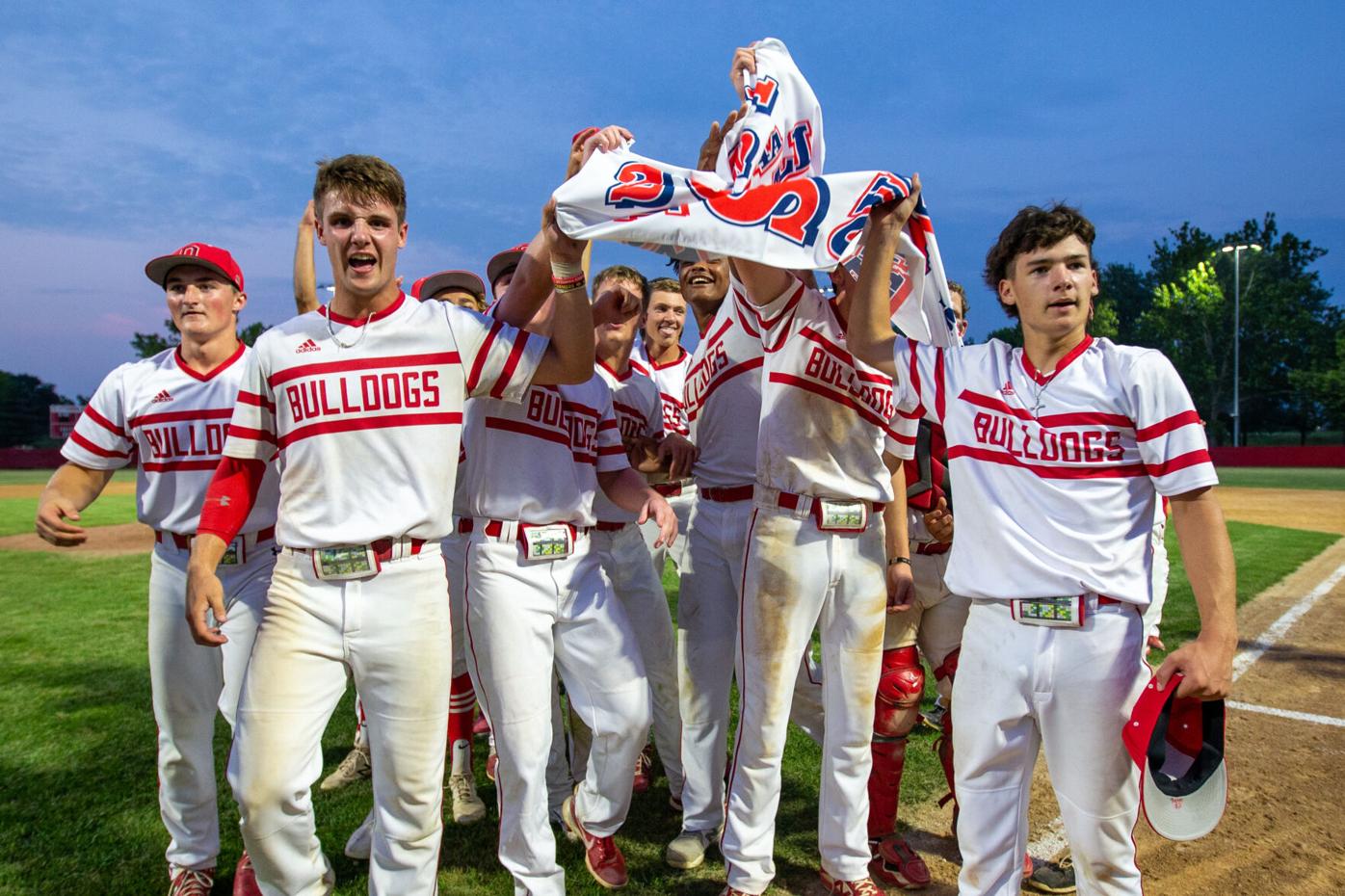 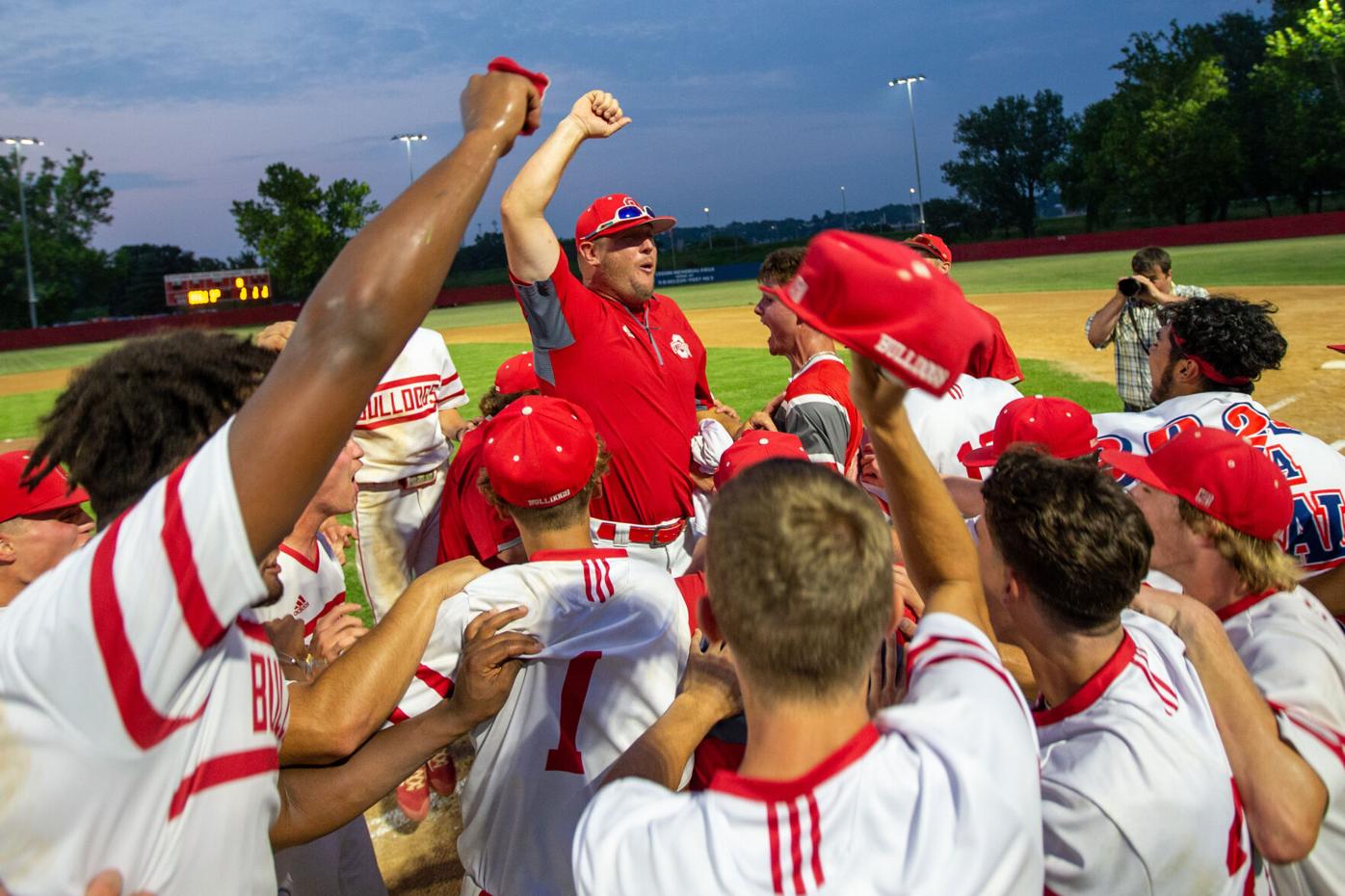 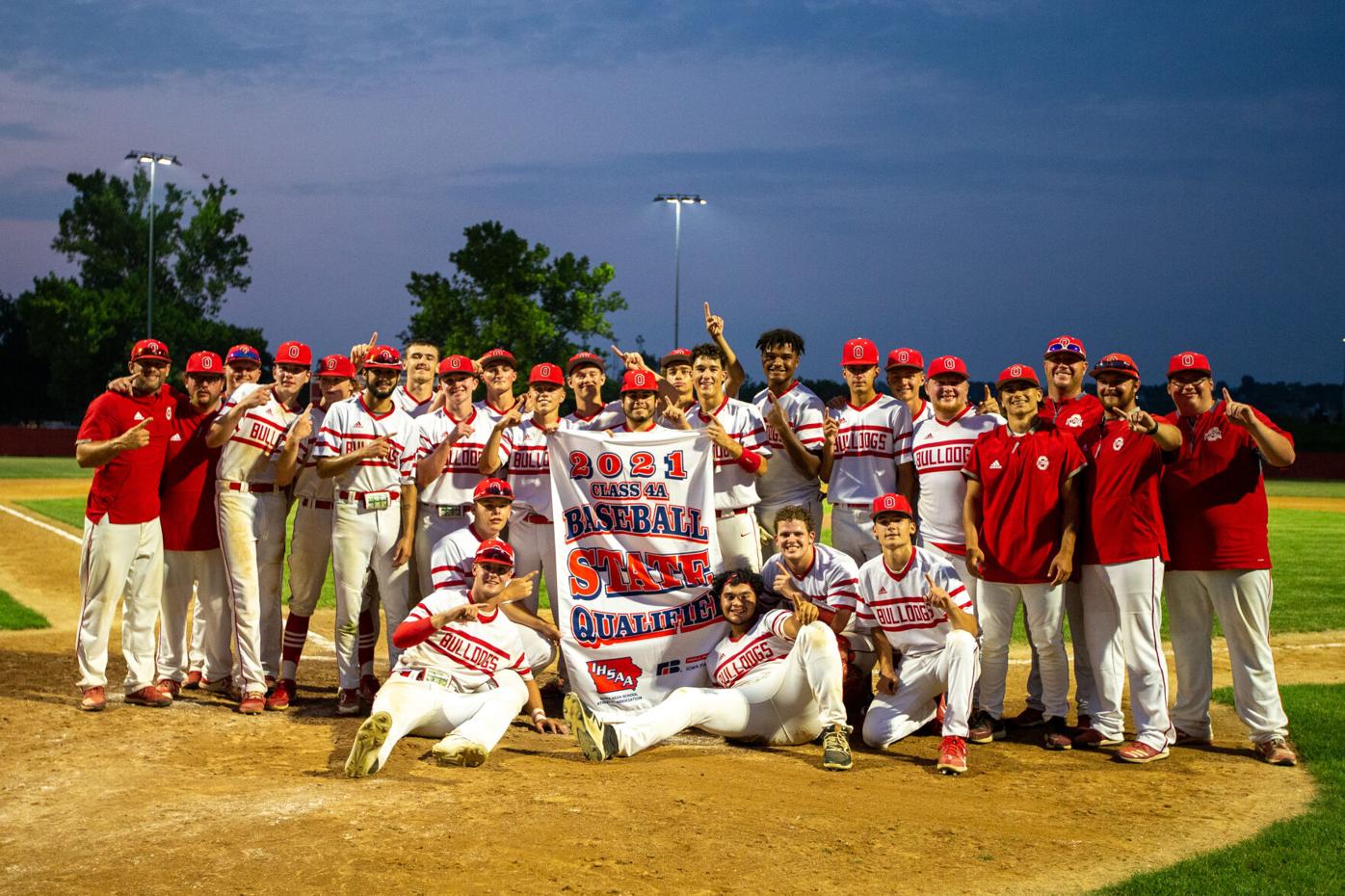 Members of the Ottumwa Bulldogs baseball team pose for a photo with the state qualifier banner after defeating the Iowa City High Little Hawks 2-1 on Wednesday. It’s the team’s first trip to the tournament since 2006.

Ottumwa Bulldogs junior Adam Greiner (10) celebrates scoring the go-ahead run in the bottom of the sixth inning during the Class 4A Substate 6 Championship game between the Iowa City High Little Hawks and the Ottumwa Bulldogs at the Legion Memorial Field on Wednesday.

Members of the Ottumwa Bulldogs baseball team pose for a photo with the state qualifier banner after defeating the Iowa City High Little Hawks 2-1 on Wednesday. It’s the team’s first trip to the tournament since 2006.

OTTUMWA — Baseball, perhaps more than any other sport, can produce some incredibly memorable moments.

That's perfect for the Ottumwa Bulldogs, who are proving to be a quite a memorable team.

Fittingly, in the game of the season at Legion Memorial Field, Ottumwa wrote a memorable end to the Class 4A, Substate 6 final. Down 1-0 entering a make-or-break sixth inning, the Bulldogs used consecutive hits by Jesus Jaime and Adam Greiner to spark a rally that ended a 15-year drought for the program.

For the first time since 2006, Ottumwa is headed to the Class 4A state baseball tournament. Jaime and Greiner both scored in the bottom of the sixth with Greiner crossing home plate as senior catcher Adam Denniston raced down the line to beat out a late throw to first base with two outs, pushing the decisive run across in a 2-1 win over ninth-ranked Iowa City High Wednesday night in an epic postseason battle.

"Our kids just hung around. I told them from the get-go that we had to be able to fight," John Jaeger said after leading Ottumwa to state for the first time in his ninth season as head coach. "The guys are always ready to battle. They're always ready to rock and roll. I knew getting through the fifth with the heart of the order coming up that we had the heart of our order coming up.

"I told those seniors going into the sixth that this would be their last chance at Legion Field. Those guys are the ones that really made it happen."

Mitch Wood was the first of four OHS seniors that would step to the plate in the bottom of the sixth with Iowa City High leading 1-0. Wood appeared to have erased that lead with one swing, driving a towering fly ball to left on the first pitch of the inning that might have been out of most ballparks.

"I was starting to get a little sketched out. I was thinking I had to make something happen leading off," Wood said. "When that ball was caught, I started to get a little down."

While it may not have left the park, Wood's deep flyout actually encouraged his teammates. Both Jaime and Greiner followed by lining pitches off Cade Obermueller, who had shut out Ottumwa allowing just one hit and struck out nine batters entering the sixth.

"When Mitch hit that deep fly ball, it told the rest of us that we could make contact off (Obermueller)," Greiner said. "We realized he was starting to get tired and we went up there looking to attack."

Jaime, who injured his shoulder going over the fence trying to track down a foul ball on Friday in a postseason win over Cedar Rapids Washington, served as the designated hitter in Wednesday's substate final. Playing with the injured shoulder required Jaime to improvise both on the plate and on the bases, where top run-producer on the Bulldogs slid somewhat awkwardly into third base before coming home on a wild pitch by Little Hawk reliever John Klosterman to tie the game at 1-1.

"I was basically swinging the bat one-handed the whole night," Jaime said. "I had just made up my mind that I was going to play in this game, whatever it took. I couldn't swing the bat normally because my shoulder would start hurting. I basically used my other hand as a guide on my swings and I couldn't slide like I normally do because I would have come down on that shoulder."

While Jaime scored the tying run, setting off a wild celebration in the Ottumwa dugout, Greiner moved up to second base and advanced to third on a groundout by Carter Thompson. That set the stage for Denniston, who played with a heavy heart having lose his grandfather just one day earlier

Denniston hit a ground ball to Gavin Koch that would have been the third out and sent the substate final into the seventh tied at 1-1. Instead, the ball bounced away from the City High infielder, allowing Denniston to race down the line as Greiner raced home with the late throw allowing Ottumwa to score the go-ahead run.

"When we went up to watch the Burlington-Iowa City High (substate semifinal) game on Monday, the first play of the game was a groundball to that same infielder. It was almost the exact same groundball and he had an error," Greiner said. "When I was at third, I kept thinking if Adam was going to hit a ground ball, he needed to hit it to that infielder.

Tanner Schark would slam the door on Iowa City High (29-14), striking out the final two batters after coaxing a line out to right by Koch to open the seventh. After setting down Dunnwald looking, Saunders blazed a fast ball past the swing of Jacob Means, setting off a wild celebration not seen by an Ottumwa team in almost two decades.

"There's nothing better than this," Greiner said. "It was an incredible crowd. The whole community came out here to support us. They're all behind us. We can't wait to take them to Iowa City."

"I think we're kind of a sleeper team going into the state tournament. I think there's a lot of people that are looking past us," Jaeger said. "Our pitching staff is really deep. We don't have guys that throw in the mid to upper-80s, but we have guys that are going to be around the strike zone and we have the defense to back it up.