Centerville catcher Kade Mosley (left) leaps up from behind the plate as Eddyville-Blakesburg-Fremont senior Thane Alexander (right) watches the baseball he put in play during the second game of a South Central Conference high school baseball doubleheader on Wednesday night at Ron Welsch Field in Eddyville. 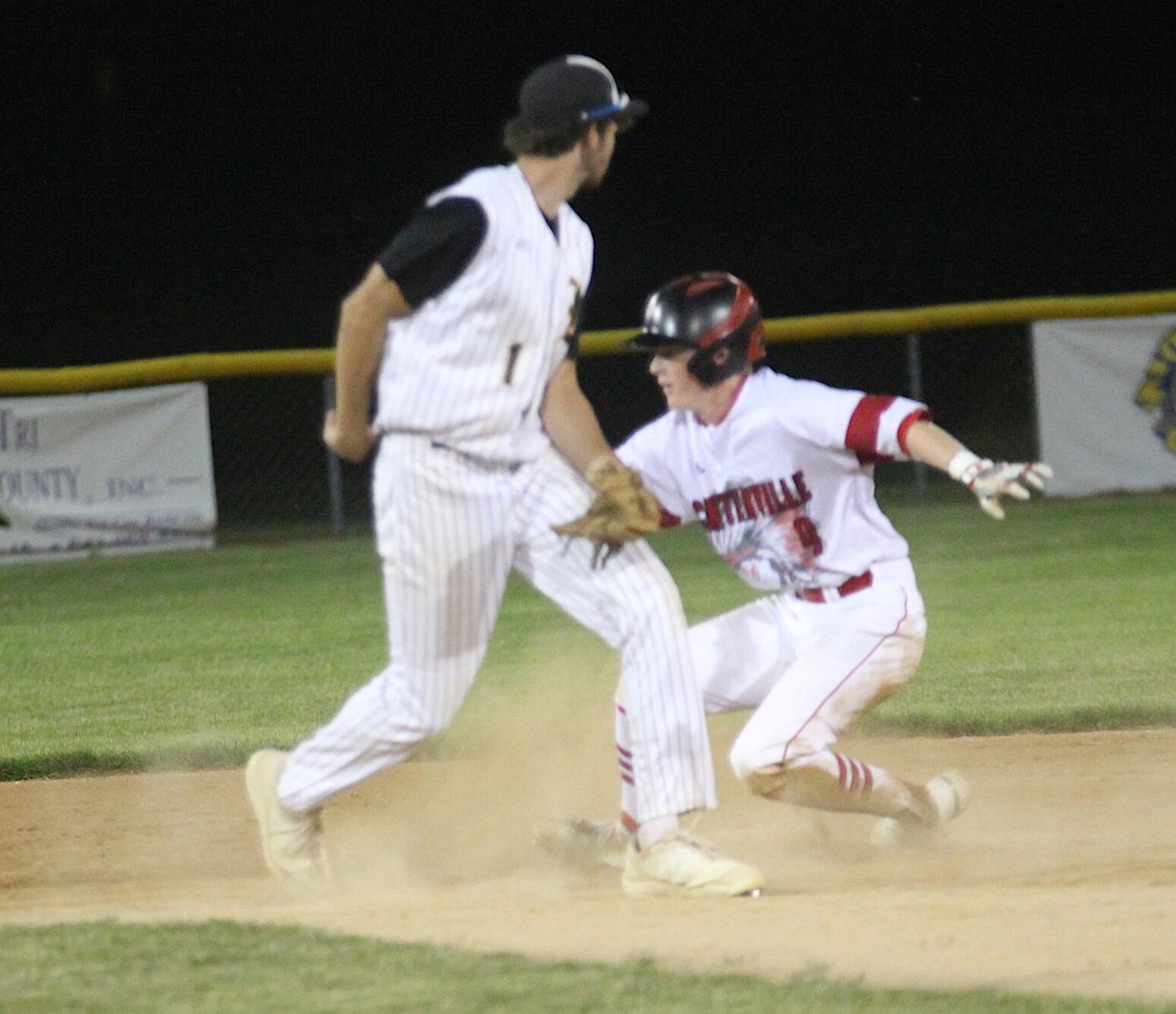 Centerville senior Kellen Johnson slides into second base during the seventh inning of a South Central Conference baseball doubleheader at Ron Welsch Field in Eddyville in front of Eddyville-Blakesburg-Fremont shortstop Ethan Davis.

Centerville catcher Kade Mosley (left) leaps up from behind the plate as Eddyville-Blakesburg-Fremont senior Thane Alexander (right) watches the baseball he put in play during the second game of a South Central Conference high school baseball doubleheader on Wednesday night at Ron Welsch Field in Eddyville.

Centerville senior Kellen Johnson slides into second base during the seventh inning of a South Central Conference baseball doubleheader at Ron Welsch Field in Eddyville in front of Eddyville-Blakesburg-Fremont shortstop Ethan Davis.

EDDYVILLE — It was a heck of a week for the Centerville Big Reds.

It was a heck of night for their junior catcher.

"I told Kade (Mosley) there at the end that he deserved a day off," Centerville head baseball coach Ryan Hodges said.

Mosley experienced the good, bad and ugly of life behind the plate, committing four errors including a throw to third base that deflected off the bat of Ethan Davis, allowing EBF to take a 3-2 lead late in game two as the Rockets moved within two innings of securing a huge South Central Conference doubleheader sweep against the fourth-ranked (2A) Big Reds.

Minutes after also taking a vicious foul ball off the midsection, sending him crumpling into the dirt in pain, Mosley stood tall delivering a tiebreaking RBI single as Centerville rallied with five runs in the final two innings to earn a 7-3 win over the Rockets after allowing the final four runs of a 6-3 loss in opening contest between the teams expected to battle throughout the season for the SCC baseball title.

"I'm still pretty sore, but it felt amazing to come through for my team in a big moment," Mosley said. "I didn't even knew it got through, but when I got to first base and I could see our guys cheering in the dugout, I knew it got through. I knew they'd be proud of me."

Mosley not only overcame four throwing errors brought on by aggressive EBF base running at the plate, but also took a pair of runs away from the Rockets. Mosley dashed up the third base line to chase down Braxton Malloy to end the sixth inning in game one and tagged out Thane Alexander trying to score EBF's second third run of game two.

Instead of a 3-1 deficit, Centerville was stay within a run of the Rockets. Mosley would drive in his first run of the nightcap with a groundout to short that brought home Otis Williams, tying the game at 2-2 in the fourth. Besides dealing with base runners and foul balls, Mosley had to deal with the hottest day of the season hanging in on a 90-degree humid night to catch all 14 innings for the Big Reds.

"That's what I really struggled with on my throws," Mosley said. "It was tough to move, especially after the first game, but I had to do what I had to do."

The heat of the night also took its toll on the Rockets. Jared McCrea, the ace of EBF's pitching staff, struggled with his command at times in game two pitching just four innings before handing the baseball off to Alexander.

"Jared was dealing with cramps. I think that started to really affect him in the fourth," Hallgren said. "We just gave up too many free bases in that second game. We let them hang around a little longer than we should have. We had chances to put them away. It's a credit to them that they came up with the big hits to get the lead and extend the lead."

Trailing 3-2 entering the sixth, Korey Shondel singled to right with one out to get Centerville's late rally started. After Alexander struck out Williams, Brody Tuttle evened the score with a sudden two-out RBI double that jolted the Big Reds before Mosley's clutch single put Centerville (7-4, 7-1 SCC) on top to stay.

"I still felt like we came out a little flatter than we needed to be in the second game, but given the week we've had, getting a split in conference is huge," Hodges said. "A win is a win even if it's ugly. There are definitely things we need to clean up, but it's not late July. It's still the middle of June."

Late offense told the tale of the winning efforts for both teams on Wednesday. Malloy's RBI triple with two outs in the fourth brought home Caleb Noble to erase a 3-2 Centerville lead in game one before Devin Jager opened the fifth inning with a tiebreaking solo home run to left, putting the Rockets (8-2, 4-1 SCC) on top to stay as Blair Francis retired Centerville's final 13 opening-game batters.

"It's still too early to tell who's got the edge in the conference championship race. Someone's going to upset somebody. We've still got to play them one more time (at Centerville on June 28) and you never know what the pitching is going to look like at that point," Hallgren said. "You don't know when someone might be in a slump and who might start feeling the grind of the season. We want to win all the games we play and win a conference title, but you can't look right now at what the conference race is going to look like by July."

For the first time since 2004, the Iowa High School Athletic Association’s summer baseball championships will be conducted at two separate sites with Carroll’s Merchants Park and the University of Iowa’s Duane Banks Field serving as hosts.

Next month’s schedules and sites were approved by the Board of Control on Thursday. The one-year plans are pending formal approval by the City of Carroll and the University of Iowa.