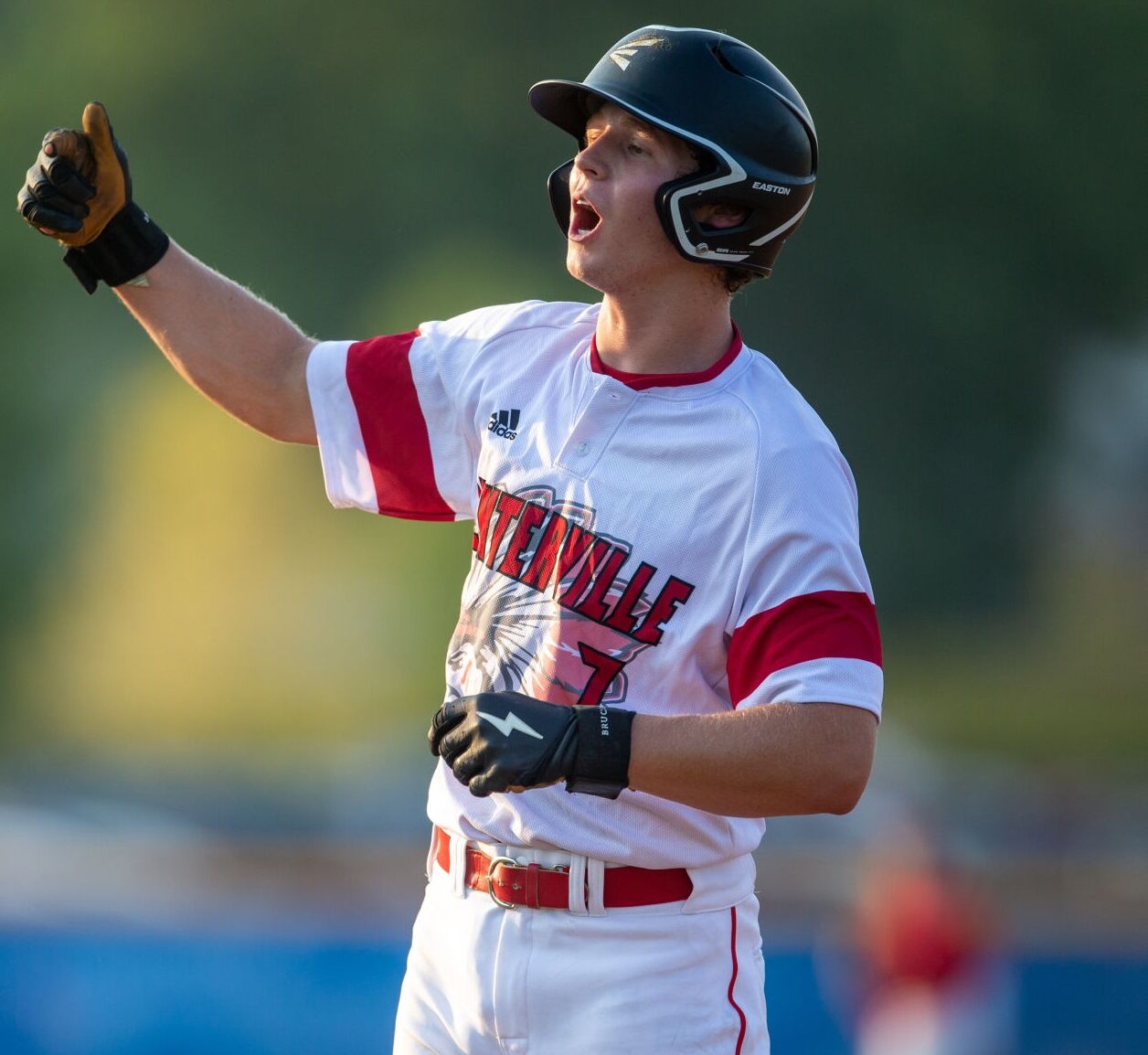 Centerville Big Reds senior Myles Clawson (7) celebrates after reaching on an error during the class 2A state quarterfinal game between the Centerville Big Reds and the New Hampton Chickasaws at Merchants Park in Carroll, Iowa on Tuesday, July 27, 2021. 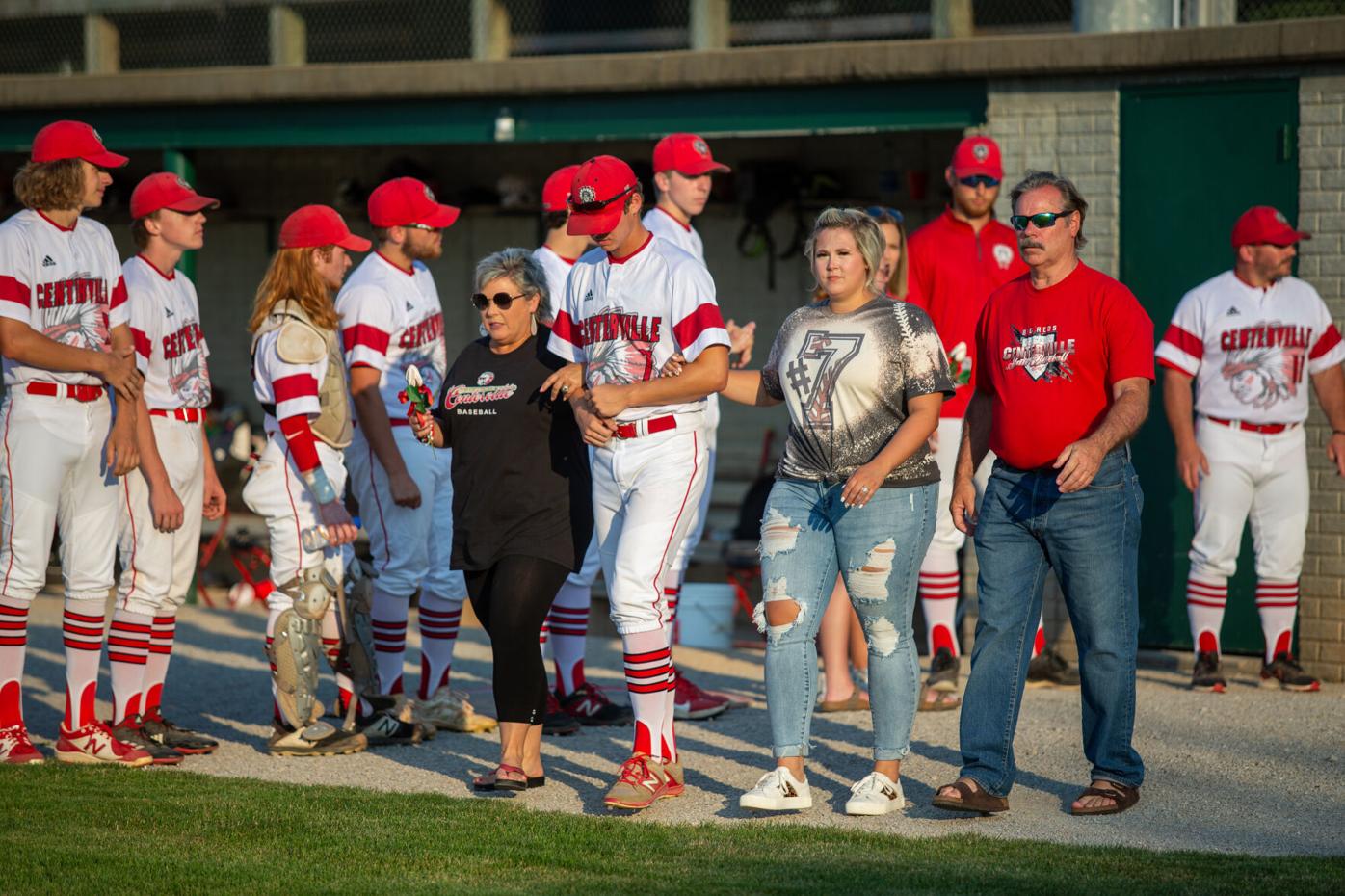 Myles Clawson is introduced during Centerville's senior night on July 5, with his mother Tonya Clawson, sister Mariah Clawson and his uncle Brad Clawson. 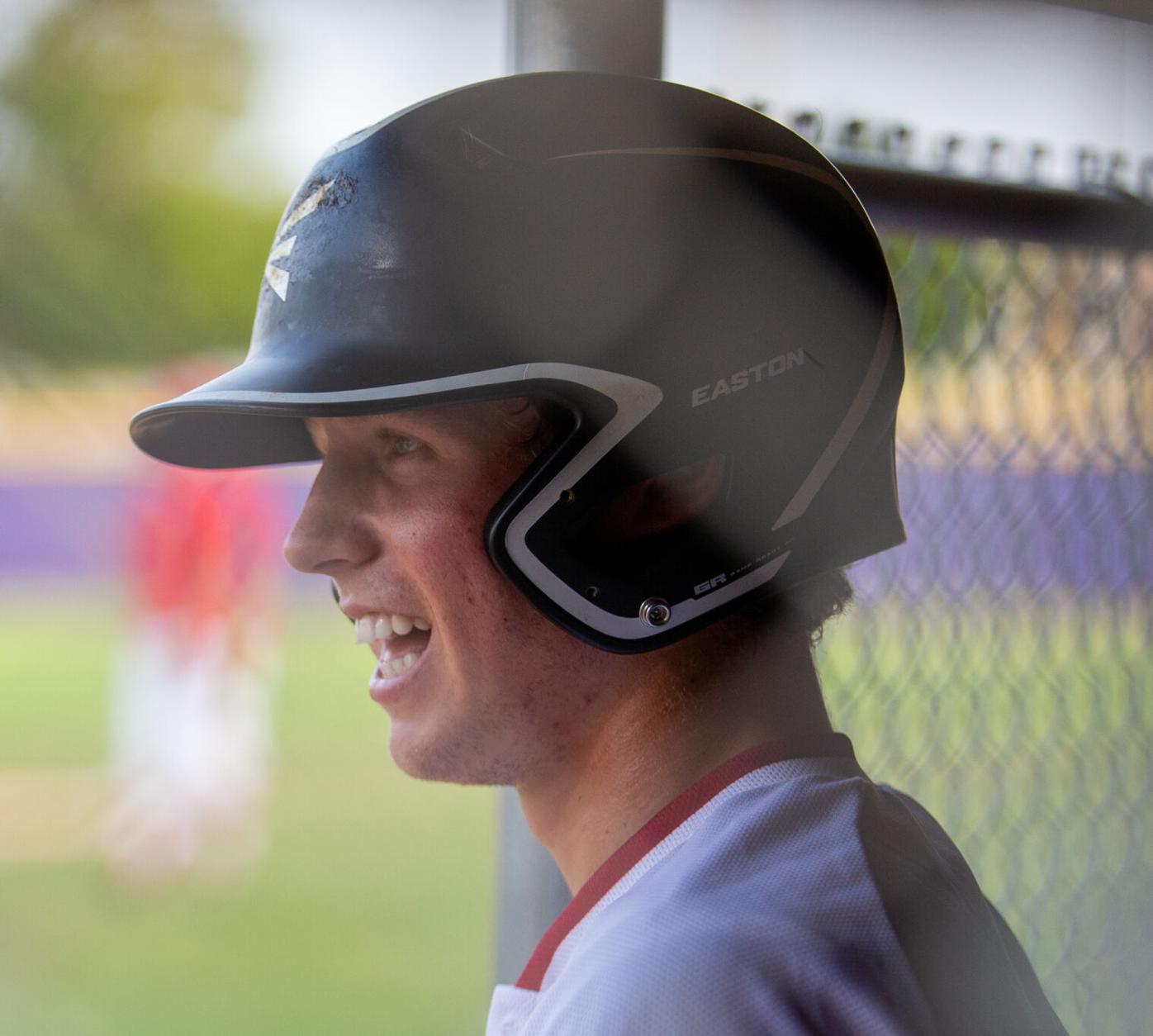 Centerville senior Myles Clawson enjoys the action of the Class 2A substate final against Pleasantville at Indianola High School this past week. 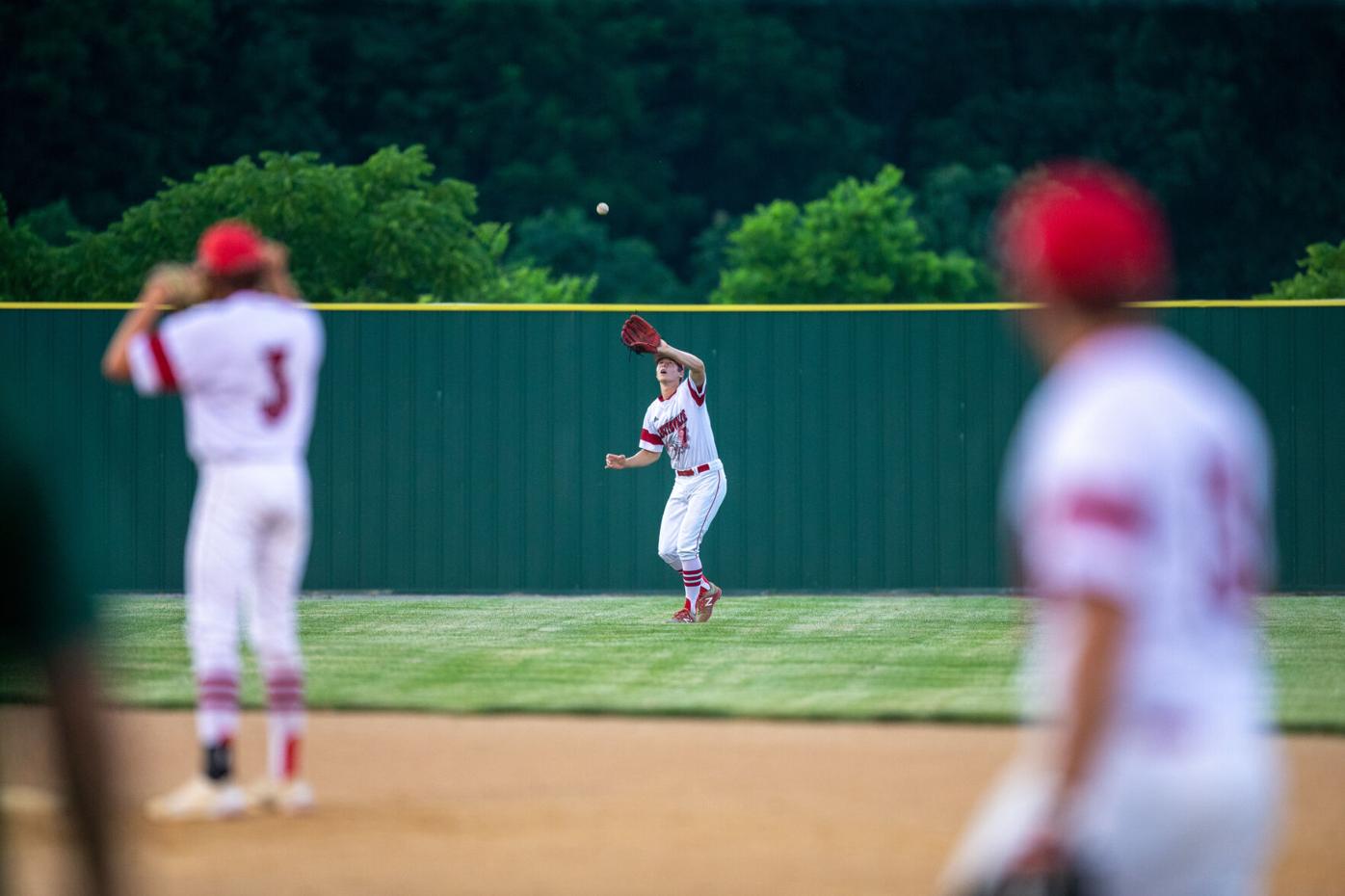 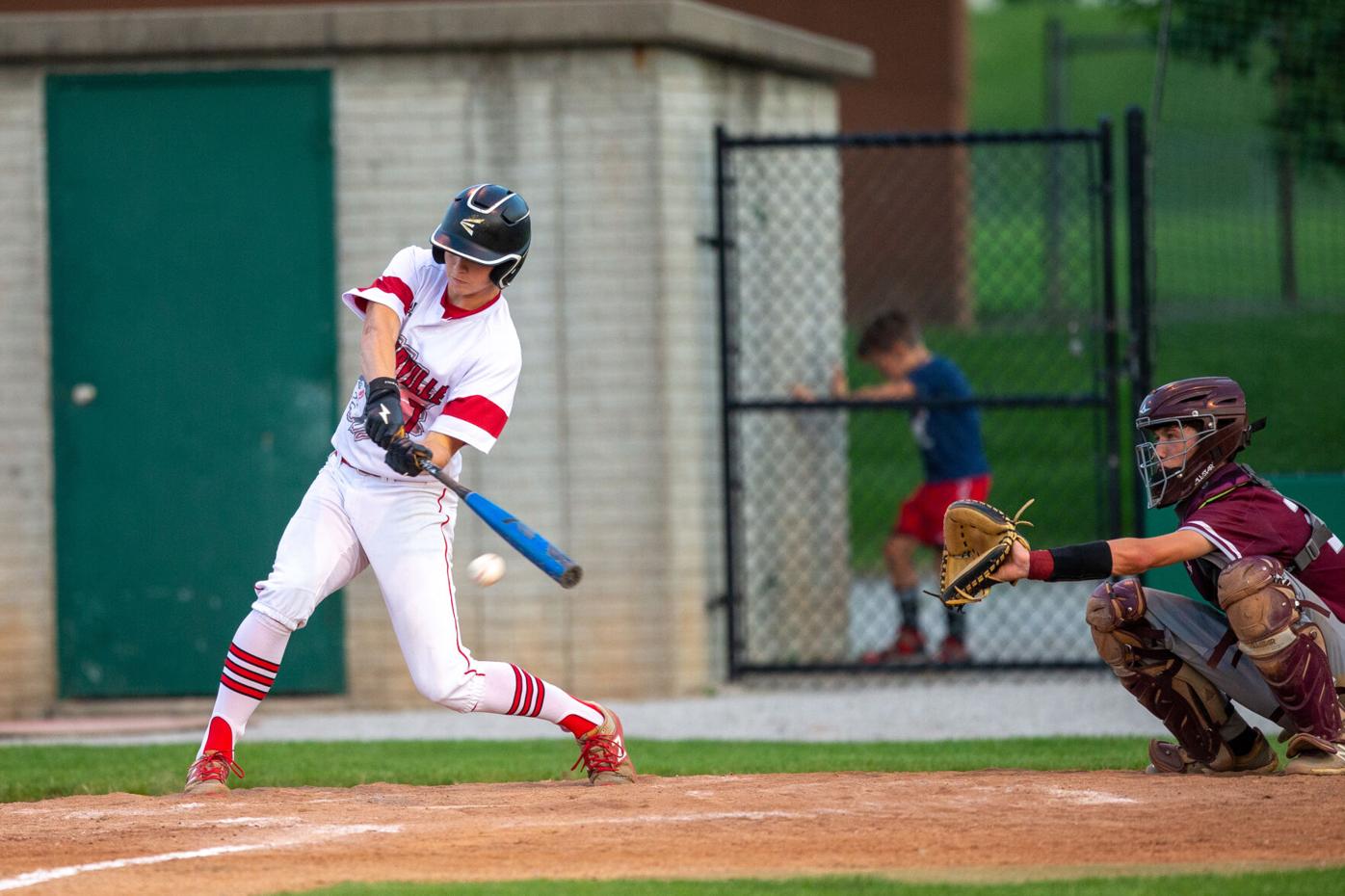 Centerville Big Reds senior Myles Clawson (7) makes contact with a ball during a game against Pella CHristian on July 17. 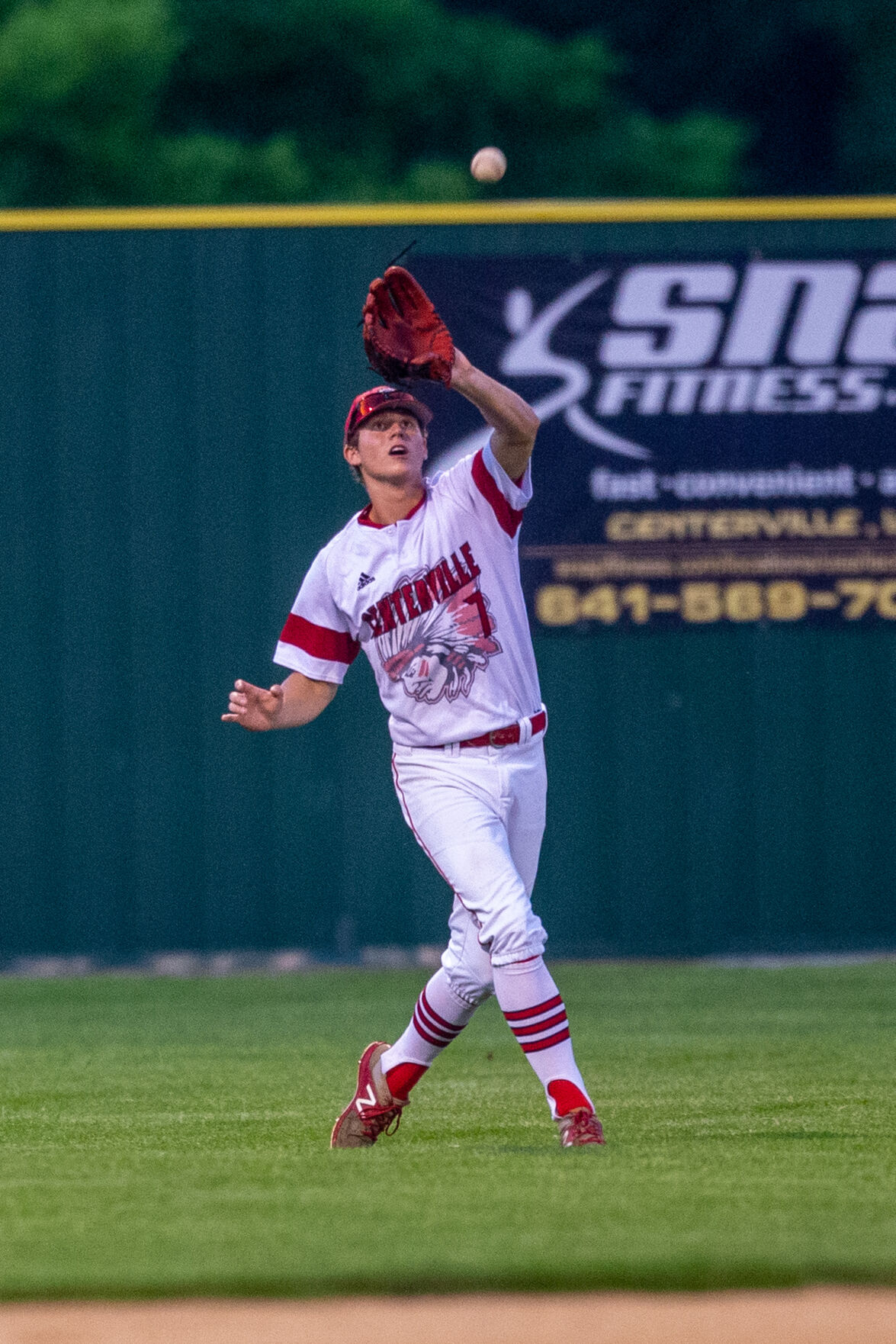 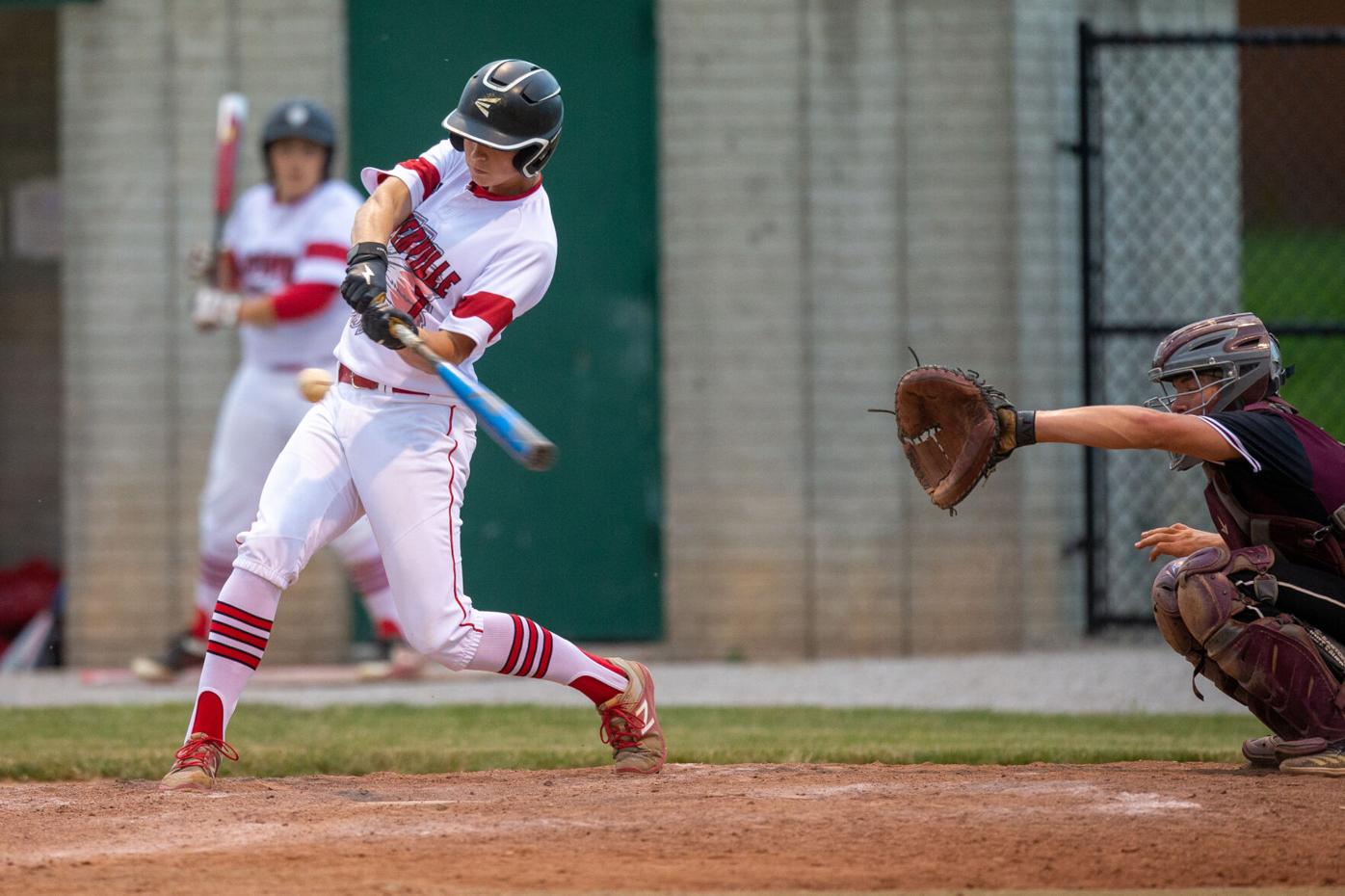 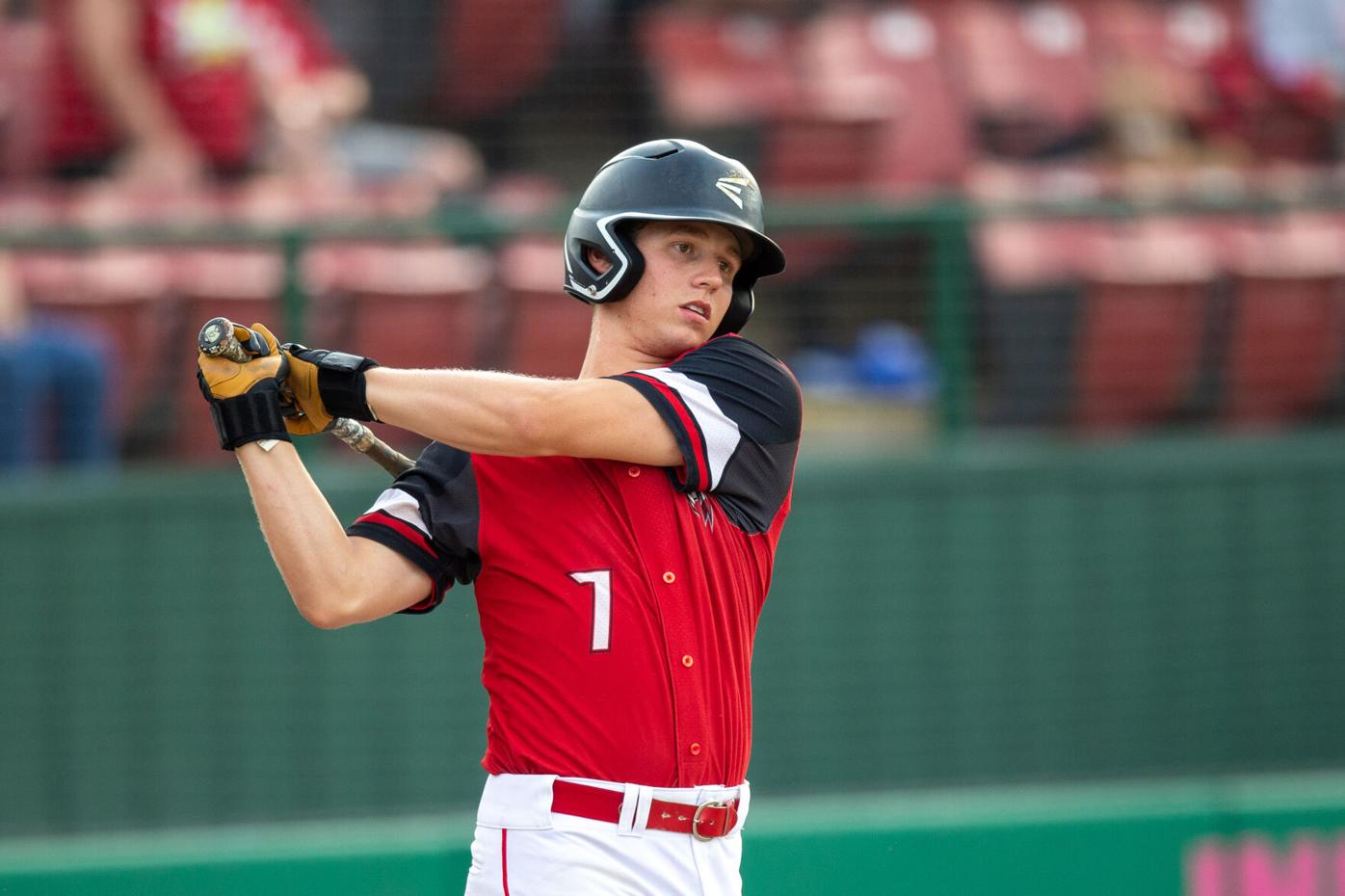 Centerville Big Reds senior Myles Clawson (7) takes a practice swing while on deck during a June 18 game against Chariton.

Centerville Big Reds senior Myles Clawson (7) celebrates after reaching on an error during the class 2A state quarterfinal game between the Centerville Big Reds and the New Hampton Chickasaws at Merchants Park in Carroll, Iowa on Tuesday, July 27, 2021.

Myles Clawson is introduced during Centerville's senior night on July 5, with his mother Tonya Clawson, sister Mariah Clawson and his uncle Brad Clawson.

Centerville senior Myles Clawson enjoys the action of the Class 2A substate final against Pleasantville at Indianola High School this past week.

Centerville Big Reds senior Myles Clawson (7) makes contact with a ball during a game against Pella CHristian on July 17.

Centerville Big Reds senior Myles Clawson (7) takes a practice swing while on deck during a June 18 game against Chariton.

CENTERVILLE — It took resiliency for the Centerville Big Reds to get back to the state baseball tournament this season.

No player, however, overcame more to be on the field at Merchants Park than Myles Clawson. One of several seniors to play in a state tournament for the fourth time in five years, Clawson reached base twice on Tuesday scoring one of Centerville's seven runs in the second inning of a 10-0 five-inning win over New Hampton in the 2A state baseball quarterfinals.

"Two years ago, I could barely walk," Clawson said. "Now, I have a chance to play for a state championship. It's just a blessing."

For Clawson, the story of his own personal comeback began within weeks of Centerville's last state tournament appearance. In the final inning of the his sophomore season, Clawson scored Centerville's only run of an 11-1 loss to Central DeWitt in the 3A state quarterfinals at Principal Park during the 2019 state baseball tournament.

Following the 24-7 campaign that ended with the program's third straight trip to state, Clawson and his family were on a vacation in California enjoying some time together in the small window between the end of the baseball season and the start of what would be Clawson's junior year of high school. Clawson remembers sitting in his family's hotel room during the trip.

The next thing Clawson remembers is waking up in a hospital room unable to move.

"It's called autoimmune encephalitis," Clawson said. "Nobody knows how it comes along. It just attacks your brain."

Autoimmune encephalitis (AE) is defined as a type of brain inflammation where the body's immune system attacks healthy cells and tissues in the brain or spinal cord. It is considered a rare, complex disease that can cause rapid changes in both physical and mental health.

Clawson can attest to that, having spent the better part of the following year battling multiple attacks before being properly diagnosed last year.

"I couldn't walk for two months, but I was in and out of the hospital and it was never treated," Clawson said. "I came back home and I was acting normal, then I started acting super hyper, which is not normal at all for me. That's when I was finally sent me to Omaha and got the treatments I needed to have."

Centerville head coach Ryan Hodges saw first-hand how much work Clawson put into his recovery from AE. That work continued on a daily basis even after Clawson was finally healthy enough just to return to the classroom at Centerville.

"I saw Myles on a daily basis when he first came back to school after that first attack," Hodges said. "He would get fatigued a little bit early on in the process of rehabbing. He had to miss some school to make it to those appointments in Omaha, but he would check in with me every day.

"To this day, I have a note on my office door that he wrote. I've known Myles since he was really young. My wife and I helped with our church and helped with the youth group that he and his mom were a part of. I knew Myles. He's a quiet, reserved kid normally, but when he was going through everything, a switch just turned on. He became a totally different kid who was more outspoken. Knowing the Myles of old, it was a funny transition, but he always had that goal of getting back to baseball."

Just months after receiving those treatments and getting back to full health, Clawson amazingly returned to start in all 16 games of his junior season on the diamond for the Big Reds. Clawson batted .407 while finishing in a three-way tie for second on the team with 22 hits helping the Big Reds finish 12-4 in a COVID-shortened 2020 campaign that ended with the team's fourth straight trip to the substate finals.

"Even last year, when he wasn't at 100 percent, it was just cool to write his name on the line-up card as a coach knowing what he had gone through and knowing what he was still going through at the time still rehabbing,” Hodges said. “To see how hard he's worked to get back even healthier this year and be an even bigger part of our team's success proves that anything is possible with him."

Clawson was actually able to make it back to athletic competition at Centerville midway through his junior basketball season. Clawson credits his father, Richard, for helping him initially be healthy enough to compete just a few months after AE left him bedridden.

"He was in the gym every day with me, feeding me healthy stuff and getting me ready," Clawson said. "That work alone brought me back to a certain point. I still needed the treatments, but without being diagnosed he felt we had to do this on our own. It got me healthy enough to play basketball and return to the classroom."

Before Clawson could be properly diagnosed and receive the necessary treatments, however, he and his family would have to deal with an unexpected tragedy. Richard Clawson died while assisting a fellow Hy-Vee semi truck driver on Jan. 15, 2020.

Not long after his father's death, Clawson returned to the hospital to continue fighting the AE inflammation. This time, he would not only not have his father by his side, but would be limited in any interactions with family or friends while staying in the hospital during to the initial stages of the coronavirus pandemic.

"I was there for about two month and couldn't go outside. I couldn't even leave my room," Clawson said. "It was probably the worst time of my life. I just had to keep looking forward and focus on the future. It was all I could do."

Fortunately for Clawson, the second trip to the hospital led to the official AE diagnosis, leading to the proper treatments needed to fully recover. Clawson started in 15 games for the Centerville boys basketball this past winter and is one of five Big Red baseball players to have played in all 34 games entering Wednesday night's state semifinal contest with Camanche.

"Everyone saw me at that low point, but I always had that mindset that I was going to get back to doing what I knew I was capable of doing on the baseball field," Clawson said. "I was never doubting myself. It was just a matter of getting back. I try to make my dad proud every day. It's all I could do.

"When my dad was helping me, we developed a routine. It was just a matter of using that same work ethic I had even before I got sick. It helped me get that muscle memory back. At first, I was just figuring out how to walk again. Johnny Cochran has helped me out a lot. I've also gone to hit with Rick Kauzlarich and I've been working out both at home and at school. Everyone's been incredibly supportive helping get me back to this point."

For Hodges, seeing Clawson compete every day serves as motivation for anyone that might be going through a rough period in their life. The Big Reds, after starting the year ranked second in Class 2A, fell to 15-14 late in the regular season before surging into the state semifinals with five straight wins including four postseason wins in which Centerville has outscored their opponents 41-8.

"Myles has proven that the sky is limit. He makes his father proud every single day," Hodges said. ”We talk every day about not looking in the past, but looking at how far he's come. Two years ago, there might have been people that wrote him off. He never wrote himself off. He stayed with it and he kept looking forward. He's been a big contributor for our team. I look for him to be a big contributor at state.

"We talk a lot about perspective on this team. I talk to the guys and ask them to think about people in their lives, be it a brother, a sister or a friend from another town that's going through something. What Myles has gone through is a reminder of how fortunate we are, win or lose, to get to go out and play the game of baseball."