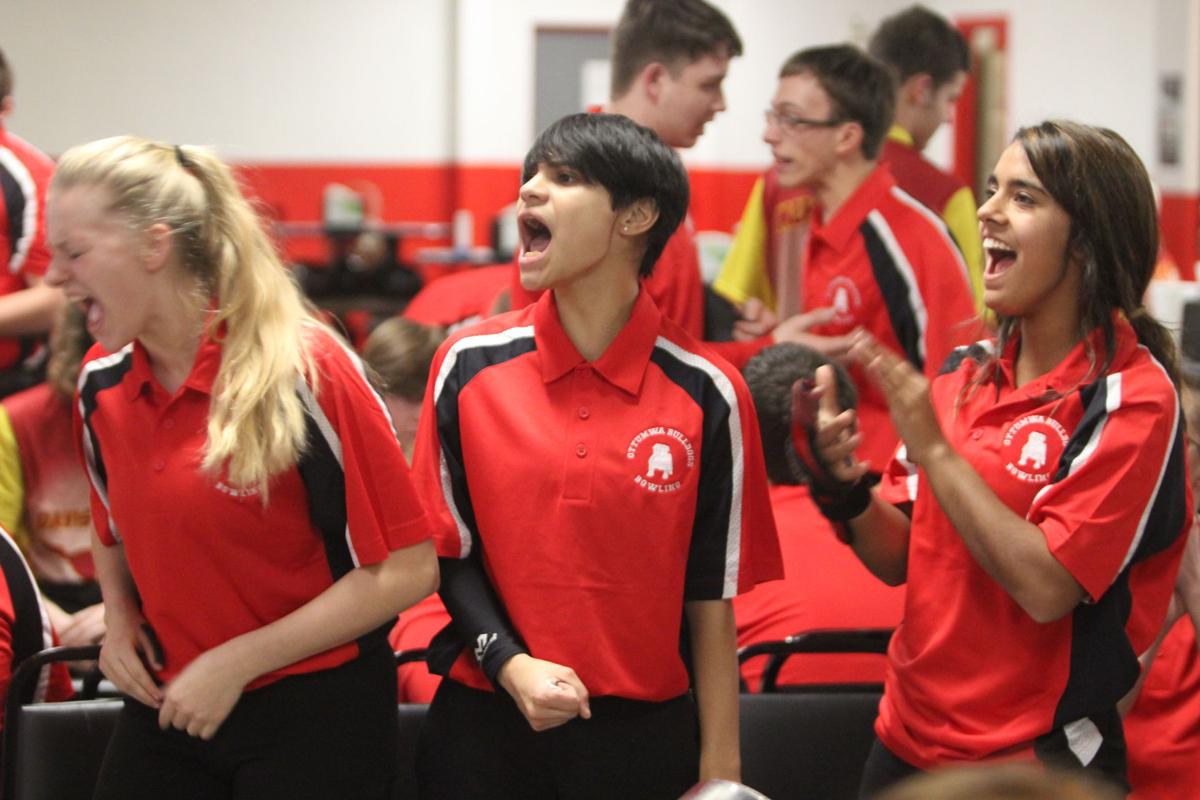 McKinna Haines, Jenny Goodman and Anna Wetrich cheer on their teammates during action for the Ottumwa girls bowling team on Tuesday afternoon at Champion Bowl in Ottumwa. Wetrich (far right) took a perfect game into the 10th frame as part of a 233 average, helping OHS win in the season opener against Mount Pleasant, Fairfield and Davis County. 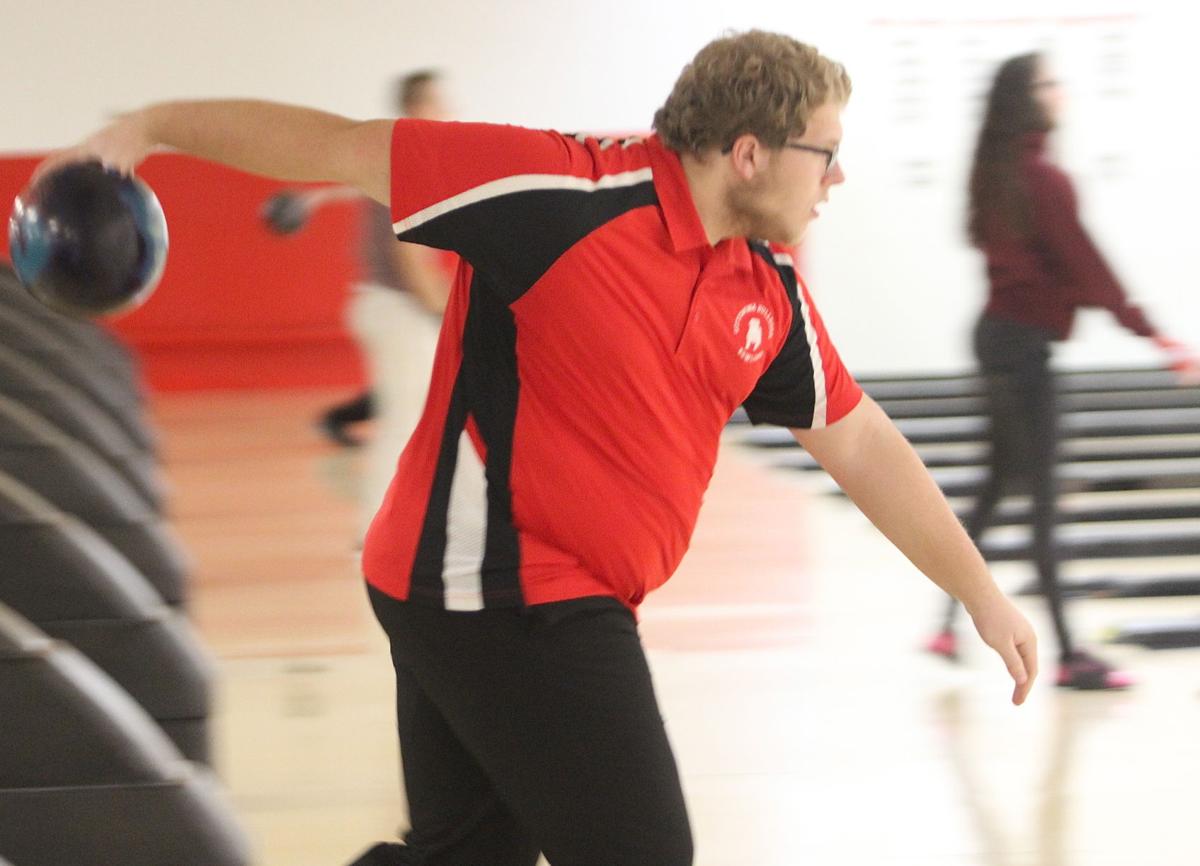 McKinna Haines, Jenny Goodman and Anna Wetrich cheer on their teammates during action for the Ottumwa girls bowling team on Tuesday afternoon at Champion Bowl in Ottumwa. Wetrich (far right) took a perfect game into the 10th frame as part of a 233 average, helping OHS win in the season opener against Mount Pleasant, Fairfield and Davis County.

OTTUMWA – It didn’t take long for an Ottumwa bowler to flirt with a special accomplishment.

Down went the 10th ball. Down went nine pins. One stayed up.

Wetrich polished off her only spare of her second game before adding a 10th and final strike to complete a 267, giving Wetrich a 233 average for the day. Ottumwa finished with a season-opening score of 2,909, almost 1,000 pins better than second-place Davis County, with Wetrich locked in on earning a career milestone before this season is over.

“I’ve never had a 300 game before. I’m pretty proud of getting that close,” Wetrich said. “I’ve had a chance multiple times, but never going into the final frame. It always ended with four of five strikes needed.

“We have more of our meets early in the season at home. We’re used to these lanes. We roll on these every day. I have a good chance to do this again. It just takes a lot of work to throw it at the same spot every time.”

Both Ottumwa bowling teams began what both hope will be state championship-winning seasons with victories over a trio of southeast Iowa opponents. The Bulldog boys rolled a season-opening 3,178, besting second-place Fairfield by 782 pins and third-place Davis County by 789.

“We had three young men on the varsity side that have never bowled varsity before,” Ottumwa head boys bowling coach Tom Maher said. “They were 176 pins over for their first two games (2,176), got a little nervous in our first baker game of the year, ducked a 149 but came back with 207, 208 and 206.”

Maher allowed the depth of the Bulldogs to shine in Tuesday’s season opener. Returning senior starters Dawson Greene and Jaxson Coble were part of the success for the OHS varsity while Garraty Richmond, Braydon Songer and Tyler Clubb helped the Bulldog junior varsity produce the second-best overall team score (3,021).

Despite the overall success of the Ottumwa bowlers, both teams had lessons to learn during the first competition of the season. For the Bulldog boys, those lessons came during various points of the baker rotation when Ottumwa bowlers started paying more attention to the play of other teams than their own play on the lanes.

“I think seeing those other teams bowling strikes started to get in the heads of our kids,” Maher said. “We’ve told the guys from day one that we need to focus on what we need to do to succeed and not pay attention to anybody else. We had a little group session with our younger bowlers, came back and our JV team finished with a 247 baker game. They rebounded nicely and didn’t get flustered when they had a bad stretch.”

As for the Bulldog girls, an opening score over 3,000 was very much in play. Head coach Doug Techel pointed to cleaning up spares as the difference in crossing that scoring mark Tuesday.

“We probably left 150 pins out there because of the spares we missed out on,” Techel said. “It’s a good score to start the season. I fully expect the girls to improve on their spare shooting as we continue. I’m not going to complain. We had good baker rounds. We’ll just need some kids to step up on their individual games. Once we get there, we’ll be there.”

Despite a threat of a 300 by Wetrich, it was junior Zoe Seamans that led Ottumwa with a 231 average. McKinna Haines posted the third-best overall score in girls competition on Tuesday with a 190 average. Randi O’Leary edged Makenzie Fischer for the top Ottumwa junior varsity girls two-game average with a 154 to Fischer’s 152.

Davis County and Fairfield were both within 100 pins of each other in girls and boys competition. The Mustang girls, led by a 179 average from Kaitlynn Larrington, edged the Trojans by 83 pins (1,950-1,867) while the Fairfield boys posted a 2,396, beating Davis County by seven with Chance Swan’s 184 average leading the way.

Bailey Hird and Sophia Mineart both posted 132 averages with Hird beating Mineart by a single pin over two games to lead the Fairfield girls. The Davis County boys, meanwhile, were paced by a 190 average from Beau Small.

“We need a little more work on our spare play, but I’m happy to be up and bowling,” Davis County head bowling coach Jason Rook said. “The kids are a little rusty, but they’ll come alive. We’ve got 38 bowlers out with 10 girls and 28 boys. That’s an increase from last year. The sport is growing in Davis County. The kids are grasping it, going out and bowling on the weekends. Their really enjoying it.”

Greene led the Ottumwa boys with a 237 average, just four pins ahead of Clayton Morris and seven pins ahead of Coble. Richmond had the top average for the Bulldog junior varsity with a 236.

“It was good, but it was also ugly for us,” Coble said. “We want to see the junior varsity bowl as well as they did, staying right with us. If you look at some our individual scores, we could have probably posted around a 3,500 score. Hopefully, that’s something we can save for state.”