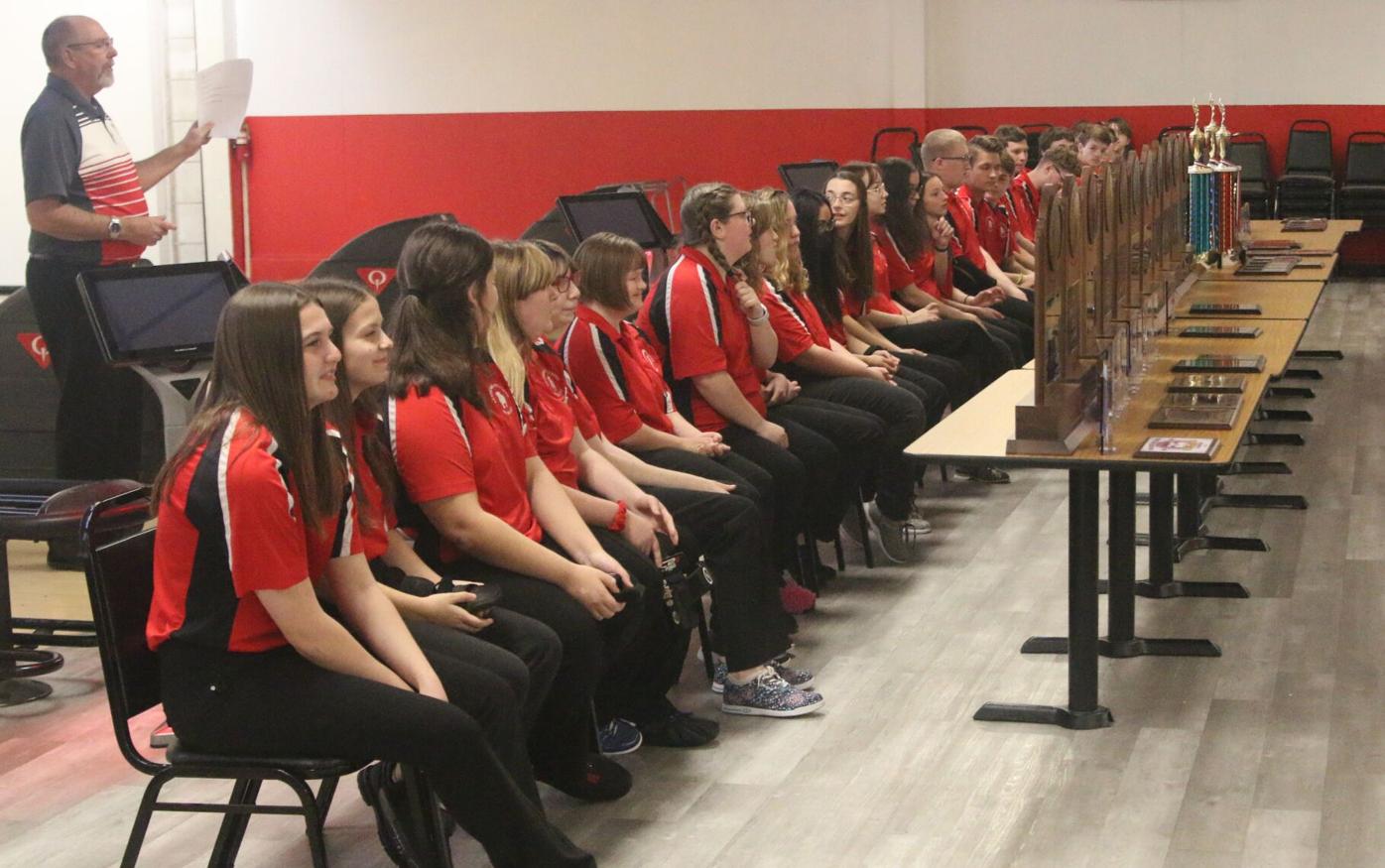 Members of the Ottumwa High School girls and boys bowling team are introduced by head girls coach Doug Techel during 'Meet the Bowlers' on Nov. 23 at Champion Bowl in front of the awards garnered by the program. 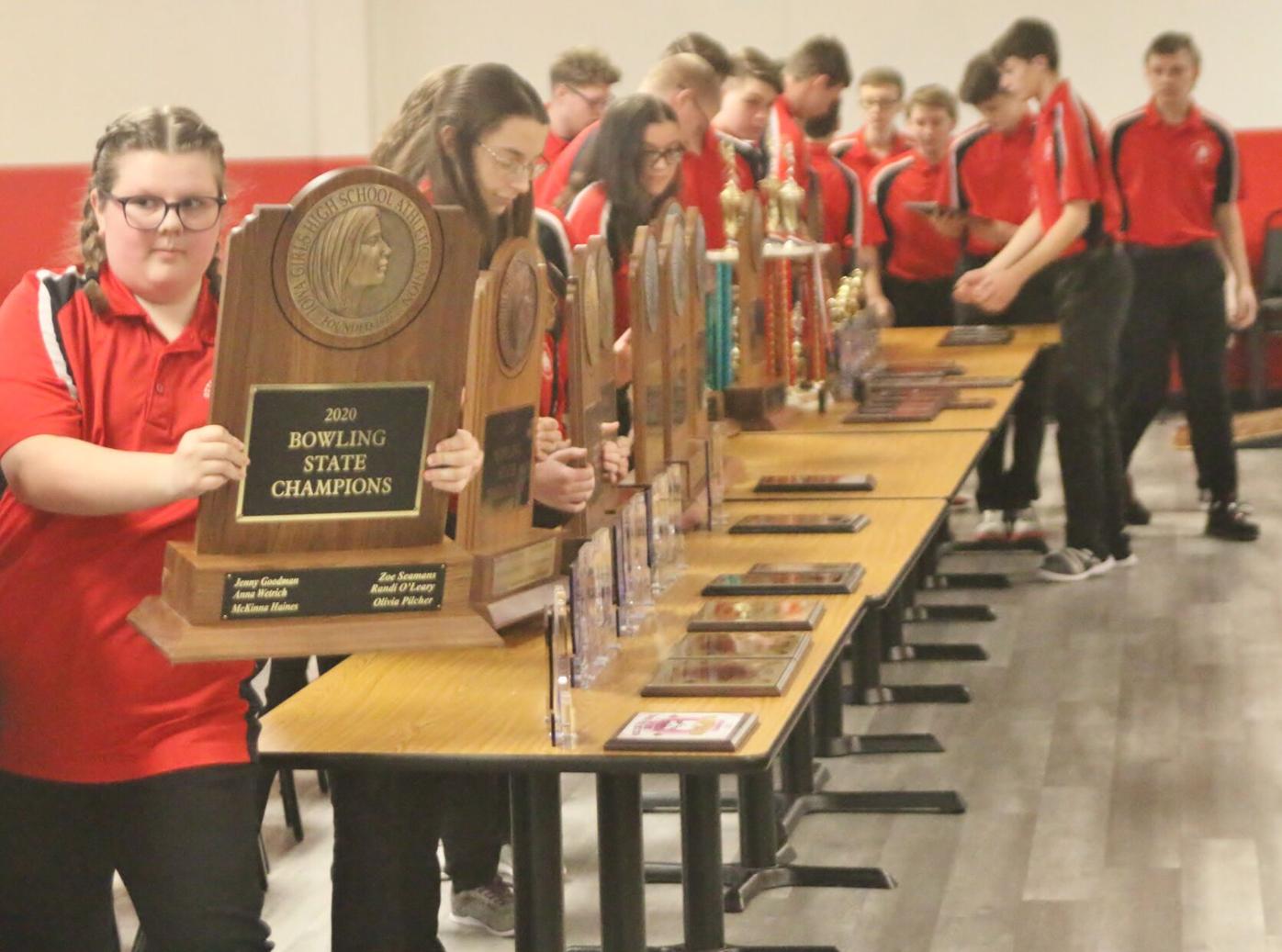 Brooklyn Welch lifts up the 2020 Class 2A state bowling championship trophy won by the Ottumwa High School girls bowling team, one of several awards won by OHS bowlers, at Champion Bowl in Ottumwa during 'Meet the Bowlers' on Nov. 23. 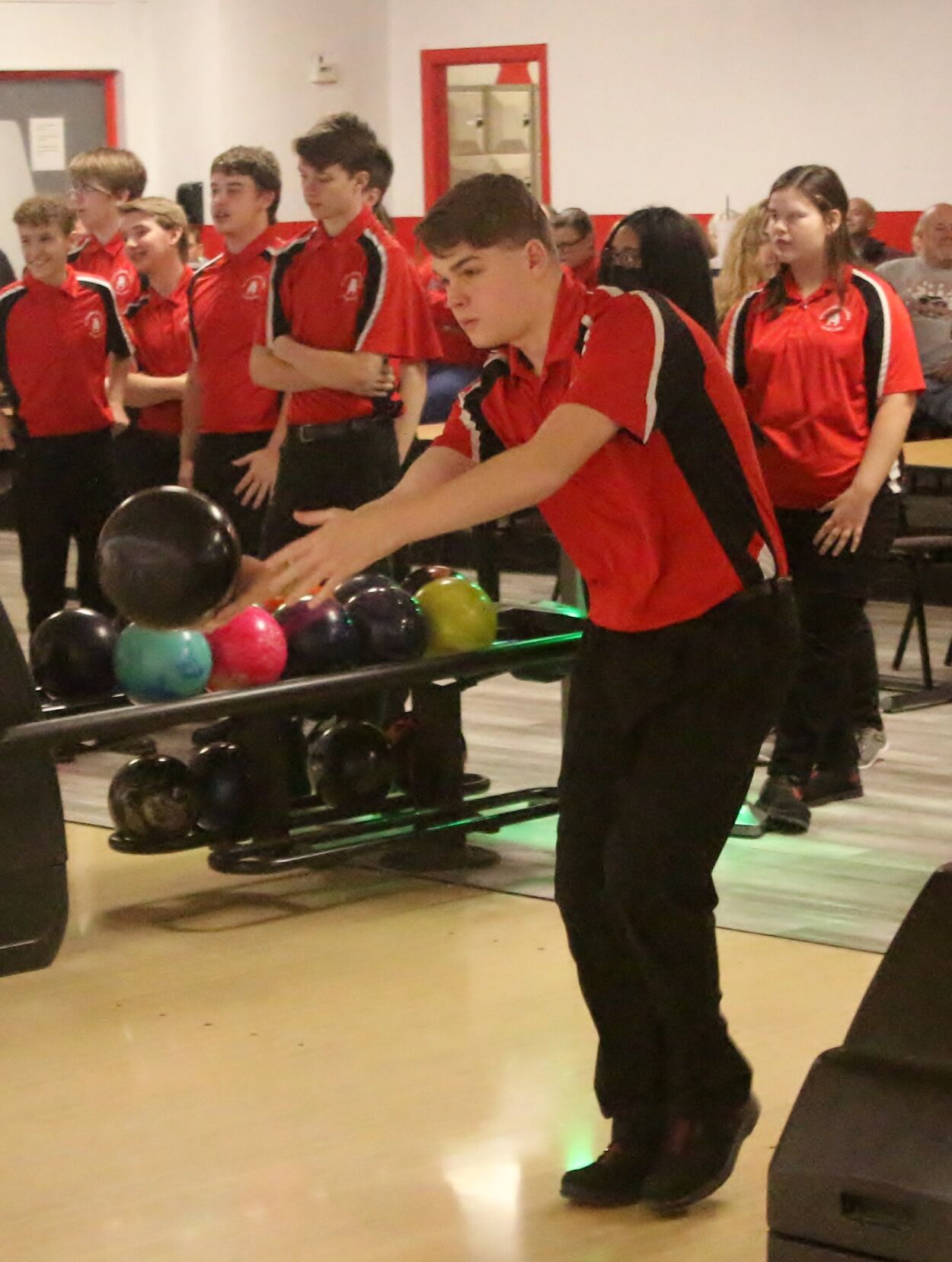 Reiley Freeman lines up a shot during 'Meet the Bowlers' on Nov. 23 at Champion Bowl in Ottumwa.

Members of the Ottumwa High School girls and boys bowling team are introduced by head girls coach Doug Techel during 'Meet the Bowlers' on Nov. 23 at Champion Bowl in front of the awards garnered by the program.

Brooklyn Welch lifts up the 2020 Class 2A state bowling championship trophy won by the Ottumwa High School girls bowling team, one of several awards won by OHS bowlers, at Champion Bowl in Ottumwa during 'Meet the Bowlers' on Nov. 23.

Reiley Freeman lines up a shot during 'Meet the Bowlers' on Nov. 23 at Champion Bowl in Ottumwa.

OTTUMWA — There's a new wall going up at Champion Bowl.

Change may be inevitable in some cases. When it comes to the expectations of the Ottumwa High School bowling program, nothing changes.

"We're planning on adding another year to that wall that will have all the years that we've been to the state tournament," OHS head girls bowling coach Doug Techel said. "It may look a little different this year, but our goal is to contend for another state championship."

Both Ottumwa bowling teams opened with wins on Tuesday at Southeast Polk. The Bulldog girls won by 264 pins (2553-2289) over the Rams while the OHS boys opened the season rolling a team score of 3,187, beating Southeast Polk by 582 at the Great Escape.

The Ottumwa girls have reached lofty heights, winning seven sanctioned state team titles and 10 state championships overall in the history of the program. The Bulldogs are seeking a three-peat this season, having won consecutive state team titles including a 56-pin win over Cedar Rapids Jefferson last year rallying in the baker rounds to post a final team total of 3,076 at least year's 3A girls state tournament.

Bakers will play an even bigger roll in determining the state bowling team champions this season. For the first time, the three state team tournaments will be decided in a baker tournament with eight teams battling through three rounds of heads-up best three-of-five baker games to determine the state champion

"Our regular season is going to be just like it always has been, but I think our practices are going to gear more and more to the baker side of things as we get closer to the postseason," Techel said. "In my mind, there are really only two meets that count. Substate and state are the only tournaments that matter, so we have to be trained both physically and mentally to endure that type of tournament."

The added physical preparation began on the first day of practice. Between the normal work on the lanes, Techel had his bowlers complete over 150 squats to prepare for a true endurance test with as many as 15 baker games, or 150 baker frames, required in a single day to potentially win a state title.

"It was pretty painful, but it's getting us in shape for the entire season," OHS senior Makenzie Fischer said. "In the past, it's been more about physical preparation. This year, we need to build up our strength. It's going to be a new test for everyone."

While the Ottumwa girls are looking for an 11th state team title, the Ottumwa boys are seeking to break through be bringing home the program's first sanctioned state championship. The change in format to a baker tournament might give the Bulldogs that opportunity having fallen short each of the past four years under the old format despite posting some of the top scores of the past four seasons at Cadillac Lanes.

Now, Ottumwa has a chance to go head-to-head with the best in the state. The Bulldogs hope they can advance through the bracket to bring home that elusive state championship trophy this year from Waterloo.

"I think it gives us a great chance. It's going to be a change that we are all looking forward to," Ottumwa senior Reiley Freeman said. "I feel like, especially with it being bakers, we've got an even better chance to win a state title. We're really good in the baker rounds and, if we practice all year to get to that point, I'm really excited to see what we can do."

Experience won't be a problem for either Ottumwa team. Freeman collected his first state medal last season, placing third individually in the 2A boys state tournament with a two-game average of 244 while Richard Garrett showed his growth as a player posting two consistent state games with a 204 opener and a 201 second game had a consistent day.

Freeman, Garrett and Mason Konrad all competed at state last season for the OHS boys while Olivia Pilcher, Liberty Welch and Fischer return after helping the Bulldog girls claim last year's state team championship. Ottumwa bowlers got to see exactly the legacy they are trying to live up to during the program's second annual 'Meet the Bowlers' night last Tuesday as the various championship trophies and medals were on display on several tables stretched in front of several lanes at Champion Bowl.

"Looking back on those accomplishments, it's something I'm so proud to be a part of," Fischer said. "I can see everything that people have done before me. I had no idea about the whole history of the program. It's pretty cool to look back on it. It definitely inspires me to do a little bit better each day to reach for that state championship goal."