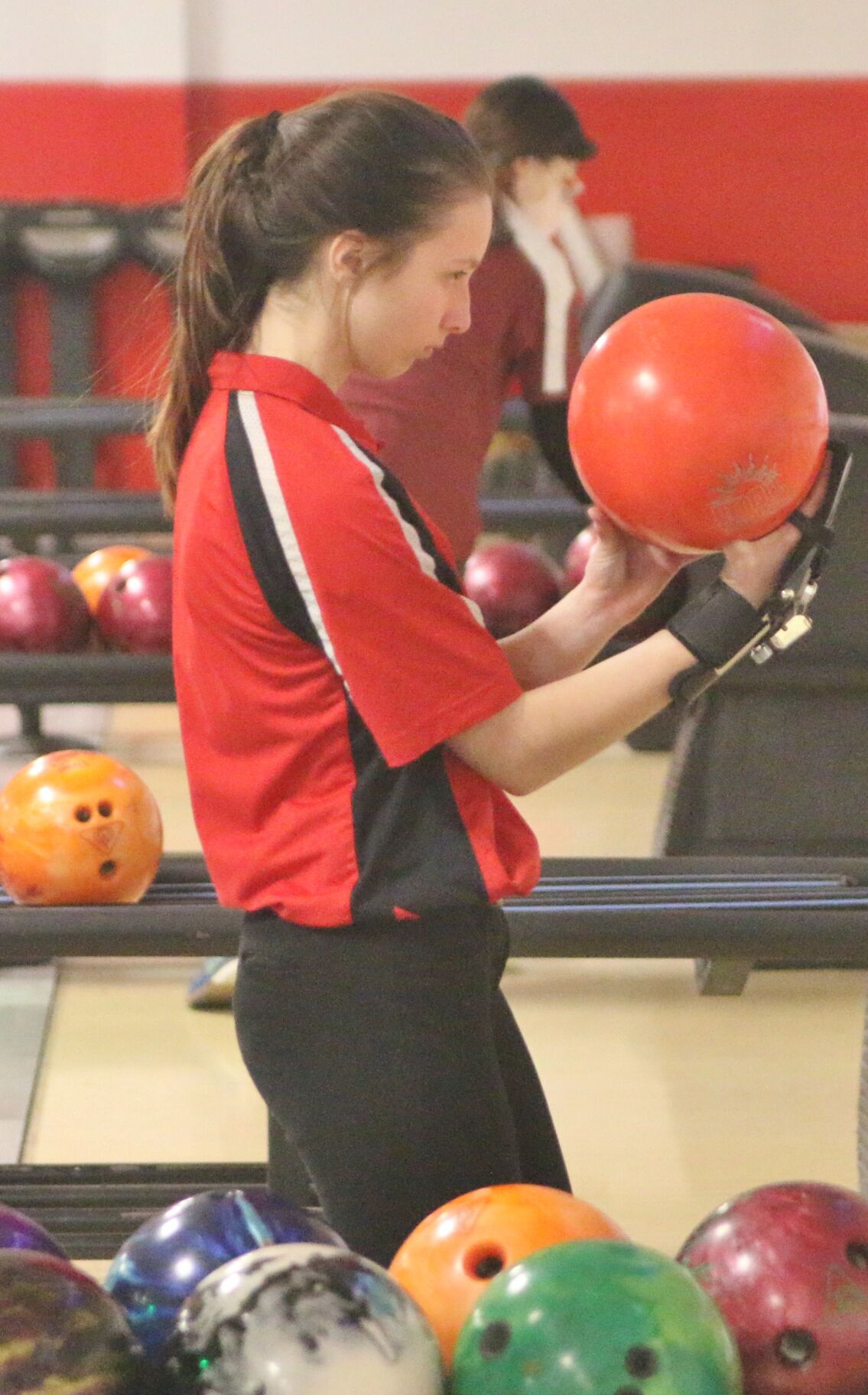 Ottumwa senior Olivia Pilcher focuses in on a shot during a CIML girls bowling dual with Dowling Catholic on Tuesday at Champion Bowl in Ottumwa. 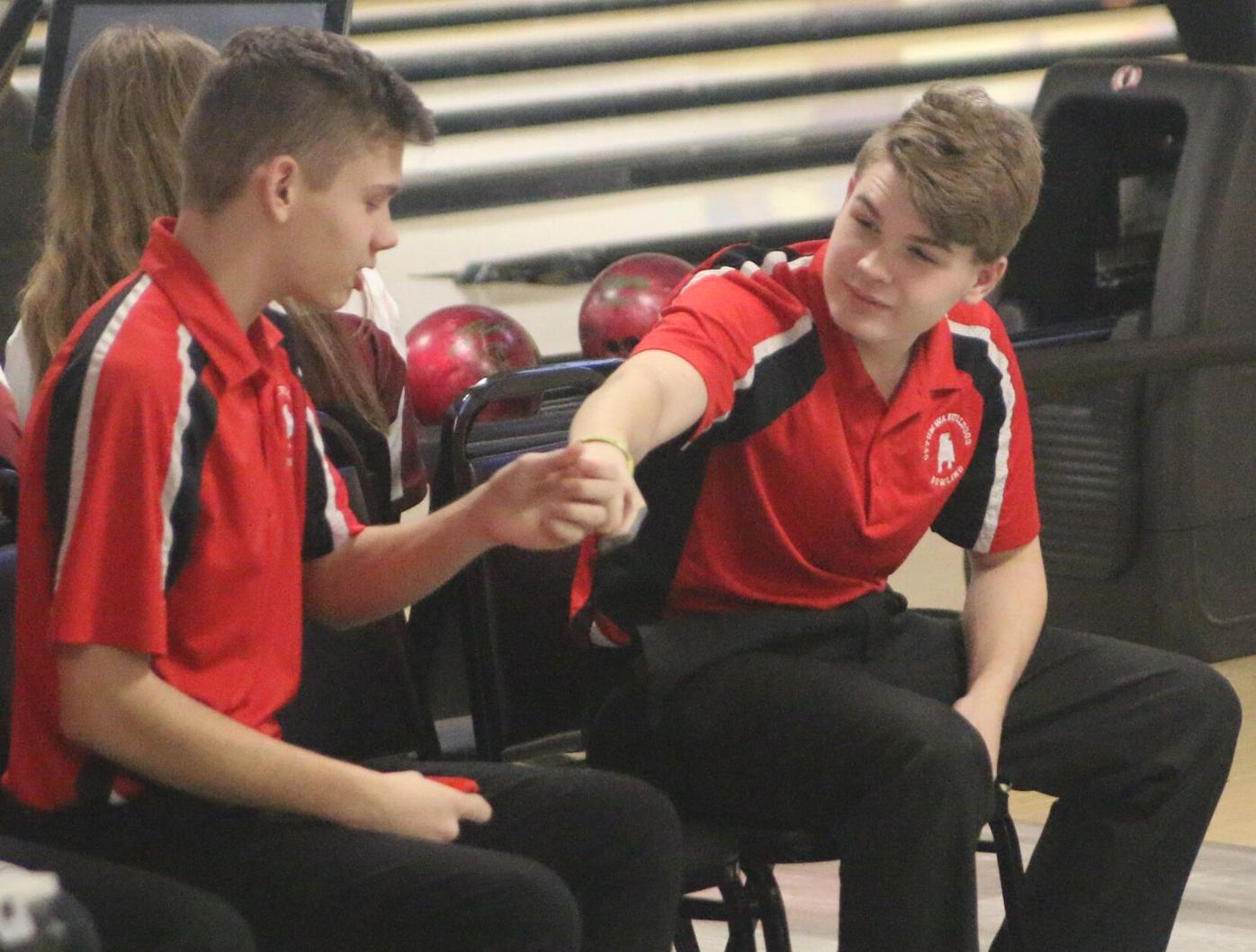 Ottumwa senior Reiley Freeman (right) is congratulated by Bulldog bowling teammates after making another bid for his second perfect game, rolling a 286 in the opening game of a CIML boys bowling dual with Dowling Catholic on Tuesday at Champion Bowl. Freeman rolled 10 straight strikes before leaving one pin standing on his 11th of 12 rolls in the game.

Ottumwa senior Olivia Pilcher focuses in on a shot during a CIML girls bowling dual with Dowling Catholic on Tuesday at Champion Bowl in Ottumwa.

Ottumwa senior Reiley Freeman (right) is congratulated by Bulldog bowling teammates after making another bid for his second perfect game, rolling a 286 in the opening game of a CIML boys bowling dual with Dowling Catholic on Tuesday at Champion Bowl. Freeman rolled 10 straight strikes before leaving one pin standing on his 11th of 12 rolls in the game.

OTTUMWA — Perhaps it's just a matter of time.

Reilly Freeman is certainly headed in the right direction to secure his second 300 game before the Ottumwa High School bowling season is over. For the second straight meet, Freeman made a deep run at a perfect game this time rolling 10 straight strikes in the opening game of a CIML dual win over Dowling Catholic on Tuesday at Champion Bowl.

"It helped taking a perfect game into the eighth frame (last Thursday against Des Moines Hoover), at least until the 10th frame," Freeman said. "It's tough to say that I choked, but I sat up there too long thinking about it. By the time I finally got up (for the 11th shot), I couldn't even feel my hand. I just dropped the ball straight into the lane."

Still that shot almost became Freeman's 11th straight strike. Just like the eighth frame Thursday against Hoover, just one pin failed to fall against Dowling as Freeman finished off a 286, coming seven pins closer to perfection. Freeman added a 183 in the second game for a meet-best 469 series score, five pins better than his series score rolled five days earlier.

"I just tried not to think about rolling a 300. I was literally trying to think about everything else other than that," Freeman said. "When you try to avoid that subject, it becomes the only thing on your mind. The hardest strike to get is that one in the ninth frame. It kind of feels like it's make or break.

"I felt pretty confident once I got that strike in the ninth. I just sat up there too long thinking about it during that 10th frame."

Overall, both Ottumwa bowling teams improved their scores from lackluster showings in CIML Metro conference wins over Hoover on Thursday in the first meet of 2022. Paced by Freeman, the Bulldog boys (10-1) cracked 3,000 for the fourth time this season finishing with a 224 baker game to clinch a 621-pin win with a final team score of 3,017.

"We bowled really well in the first set of individuals. We just had a bit of a let down in the second round of individual games," Ottumwa boys bowling coach Tom Maher said. "The lane changed a little bit and we didn't move with them quite quick enough, but it was more of a mental letdown. You could just feel the energy wasn't there like it was in the first games.

"We started out well in the baker games, then we hit a little bit of lull and missed way too many spares. We'll work on it, but it seems to be a common theme in the last couple of meets. Cover spares seem to be the issue."

The Ottumwa girls (10-0) improved their team score by 158 pins from Thursday's meet with Hoover, posting a score of 2,711 against Dowling. Most of that improvement came during individual play, which saw a revamped line-up produce a 1,792 total with a 401 series by Makenzie Fischer leading the way.

"This was probably my best round," Fischer said. "I haven't rolled back-to-back games of 200 ever. That's something I'm pretty proud of."

Fischer clinched the career milestone by following up a 200 opening game by rolling three straight strikes in the 10th frame to post a 201 in the second game. That clutch bowling earned Fischer a chance to anchor the baker rounds for the Bulldogs for the first time.

"It definitely made me more focused knowing that I needed those three strikes in the second game to get that second straight 200. It was stressful, but I didn't really think about it in that moment," Fischer said. "It was a big confidence boost for me to bowl anchor. I would have liked to have rolled a few more strikes, but I didn't miss any spares.

"Anchor is something you want to be at every time. To get that chance was really nice."

Mackenzie Clubb produced the third-best series of the day, leading the Ottumwa girls in the junior varsity dual with Dowling by matching Fischer with consecutive 200-plus games. Clubb rolled a 214 opening game, followed by a 209, to finish with a 423 series score. Only Freeman and Mason Konrad posted better scores in the meet with Konrad posting a 439 for the Bulldog varsity boys.

"We're still mixing and matching the line-up," Ottumwa girls bowling coach Doug Techel said. "It may be a little bit of a confidence issue. There's a lot of pressure bowling varsity. Our job as coaches is to keep the bowlers calm and help them continue the same routine whether they're bowling varsity or junior varsity."

Both Ottumwa bowling teams will compete at Air Lanes in Des Moines on Thursday in a CIML Metro conference dual with Roosevelt. Action gets underway at 3:30 p.m.