The Pekin boys and girls cross-country teams celebrated on Thursday at Wildwood Park after finishing first in the Class 1A state qualifying meet in Ottumwa. 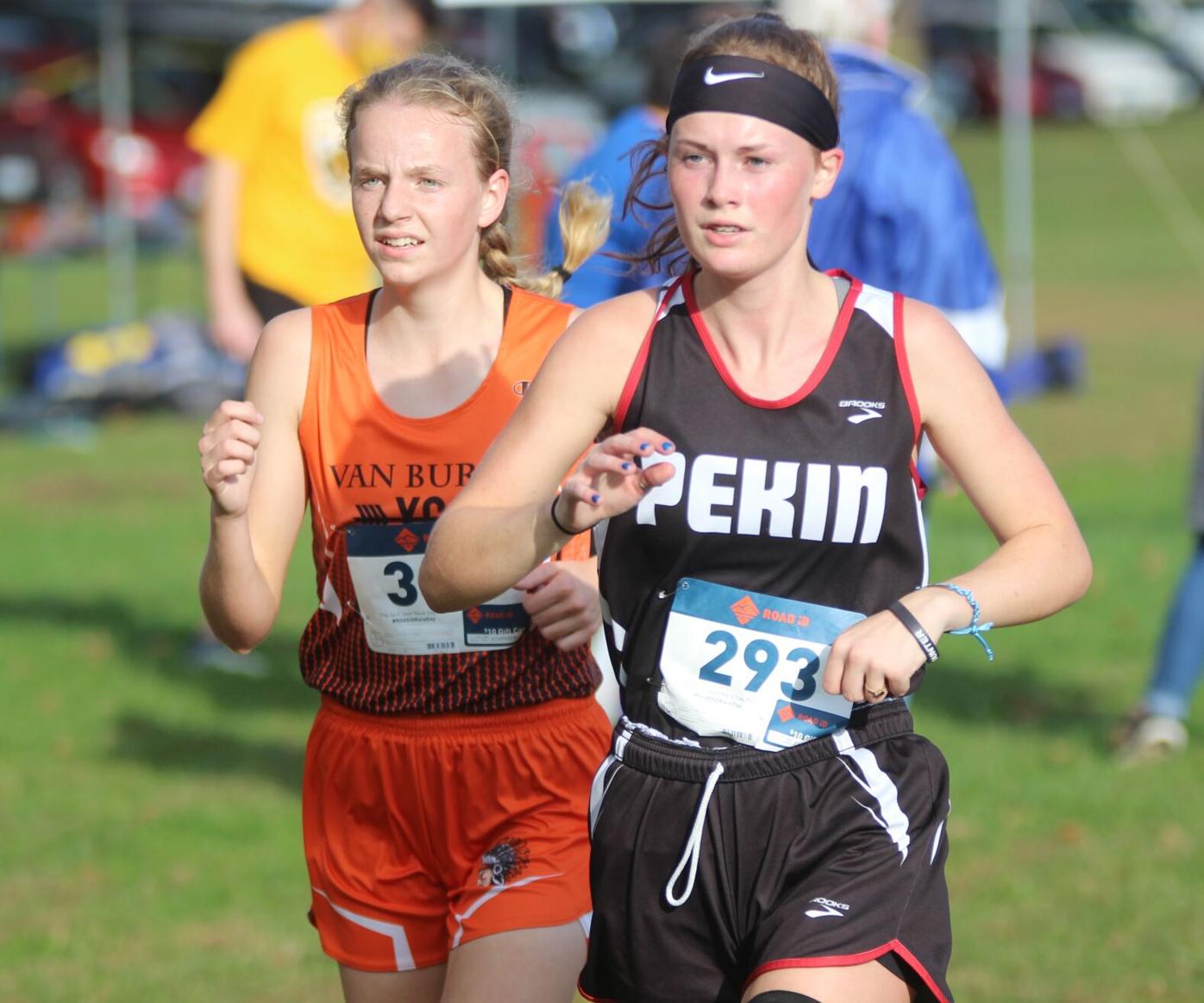 The Pekin boys and girls cross-country teams celebrated on Thursday at Wildwood Park after finishing first in the Class 1A state qualifying meet in Ottumwa.

OTTUMWA — Timing is everything. Location might have something to do with it too.

One day later or one day earlier, the Class 1A state cross-country qualifying meet would have been run on a day like many of the others over the past week with cool, crisp conditions waiting on the runners at Wildwood Park in Ottumwa.

On the day that runners in northwest Iowa were qualifying for state in 30-degree temperatures, however, the Panthers of Pekin were literally in the heat of competition as warm, muggy conditions made a one-day cameo for the week in southeast Iowa. The result was a scary scene as runners struggled to make it across the finish line with multiple runners being taken off in ambulances following the girls race on Thursday.

When it was all said and done, Pekin had what they came for. Two tickets to the Iowa High School State Cross-Country Meet. The second-ranked Panther girls held off top-ranked Iowa City Regina by 10 points (28-38) in a possible preview of next Saturday's clash for the 1A state team title while the sixth-ranked Pekin boys beat out Southeast Iowa Superconference north division rival Columbus by 21 points (56-77) for the district team title.

"The primary goal was to come in here and win the team title," said Pekin senior Brady Millikin after finishing second in the boys state qualifying race to Valley Lutheran junior Isaac Natvig. "The SEISC represented itself well. It's great for Columbus to make it. I don't remember them ever making it to state. They showed what they were worth, but our primary goal was to win the district title as a young team. I feel like this is only going to boost our confidence even more going to state."

Pekin and Columbus were joined in 2A by Danville-New London, the top-ranked team in the state, as SEISC squads to qualify for state on Thursday. The Bears scored 36 points to win the district title at Williamsburg with Mid-Prairie qualifying as the second-place team with 59 points while Williamsburg punched the third team ticket to state with 82 points on the day.

Cardinal finished seventh among the boys in the 2A state qualifier at Williamsburg with 191 points. Gavin Grove narrowly missed qualifying for the 2A boys state race, finishing 17th for the Comets in 18:03.2 falling 2.2 second short of catching Camanche sophomore Andrew Butt for the 15th and final individual berth into the state meet.

"I know some of the runners didn't achieve the individual goals they were looking for," Millikin said after finishing Thursday's run at Wildwood Park in 17:38. "Myself, my teammate Zach (Wise) both probably wanted to do a little bit better. That just motivates us more to get ready for next week."

Wise finished fourth in 17:46 as the Panthers had just two runners in the boys race place among the top 10. Freshman teammates Jaedon Wolver (11th in 18:44) and Isaac Gentry (12th in 18:52) helped solidify Pekin's team title, but could not track down Sigourney senior Mason Moore who clinched his third straight trip to state on Thursday by earning the 10th and final individual ticket to Fort Dodge in the boys race finishing in 18:34.1.

"I knew where I was in the race and I knew those Pekin kids wouldn't be too far behind me," Moore said. "I wasn't too worried about my time. I was more worried about placing and getting in to state."

That mentality might have come about after watching the carnage at the finish line that ensued in the girls state qualifying race. Twin Cedars sophomore Rylee Dunkin, a regional runner-up as a freshman and top-10 state placewinner last fall, will return to state as a regional champion in 2020 winning the girls race in 20:31.2.

"I keep improving. That was the goal this year, to try and win every meet," Dunkin said. "You just have to keep your eyes up and have the positive attitude throughout a race."

Dunkin seemed poised to return to state as a regional runner-up for the second straight year trailing Iowa City Regina senior Annalee Bartels for most of the race. Bartels set a quick pace despite the humid, windy conditions opening a 10-second lead over Dunkin and maintaining that lead all the way until the final lap.

"I always have that attitude I'm going to win," Dunkin said. "When we started up that final hill, I could finally see I was starting to close the gap."

Not only was Dunkin closing strong, but Bartels began to struggle mightily. So much so that the Regina senior would ultimately be disqualified after literally almost falling into the fans that lined the final stretch to the finish line.

Bartels would make it across the finish line just ahead of sophomore teammate Mya Whitaker, who would ultimately be awarded second place (21:36.3). Bartels immedately fell to the ground and was ushered to the side of the finish line where she would be joined soon by several runners including Pekin junior Mia Clark who's 15th-place finish helped clinch No. 2 Pekin's championship win over No. 1 Iowa City Regina.

"Some of the kids just didn't hydrate enough," Pekin head cross-country coach Davis Eidahl said. "The kids just were not used to this. It was hot and humid at the start of that race. We haven't had kids go down like that all year."

Joining the Panthers representing the SEISC will be the Danville-New London girls, who finished third at Williamsburg with 104 points in the 2A state qualifier. Van Buren County junior Faith Neeley will also represent the conference once again at state in 1A after finishing sixth in Ottumwa in 22:13.

"It's just mind over matter. Coming back from a hip injury this season and qualifying on a day like this proves that," Neeley said. "When I qualified as a freshman, I had no idea I was going to make it to state. You just have to believe you can do it and you'll do it."

The Cardinal girls could not join the SEISC party to state in 2A, finishing eighth at Williamsburg with 189 points. Alexia McClure's final run for the Comets ended with a 27th-place finish in 23:07.8.