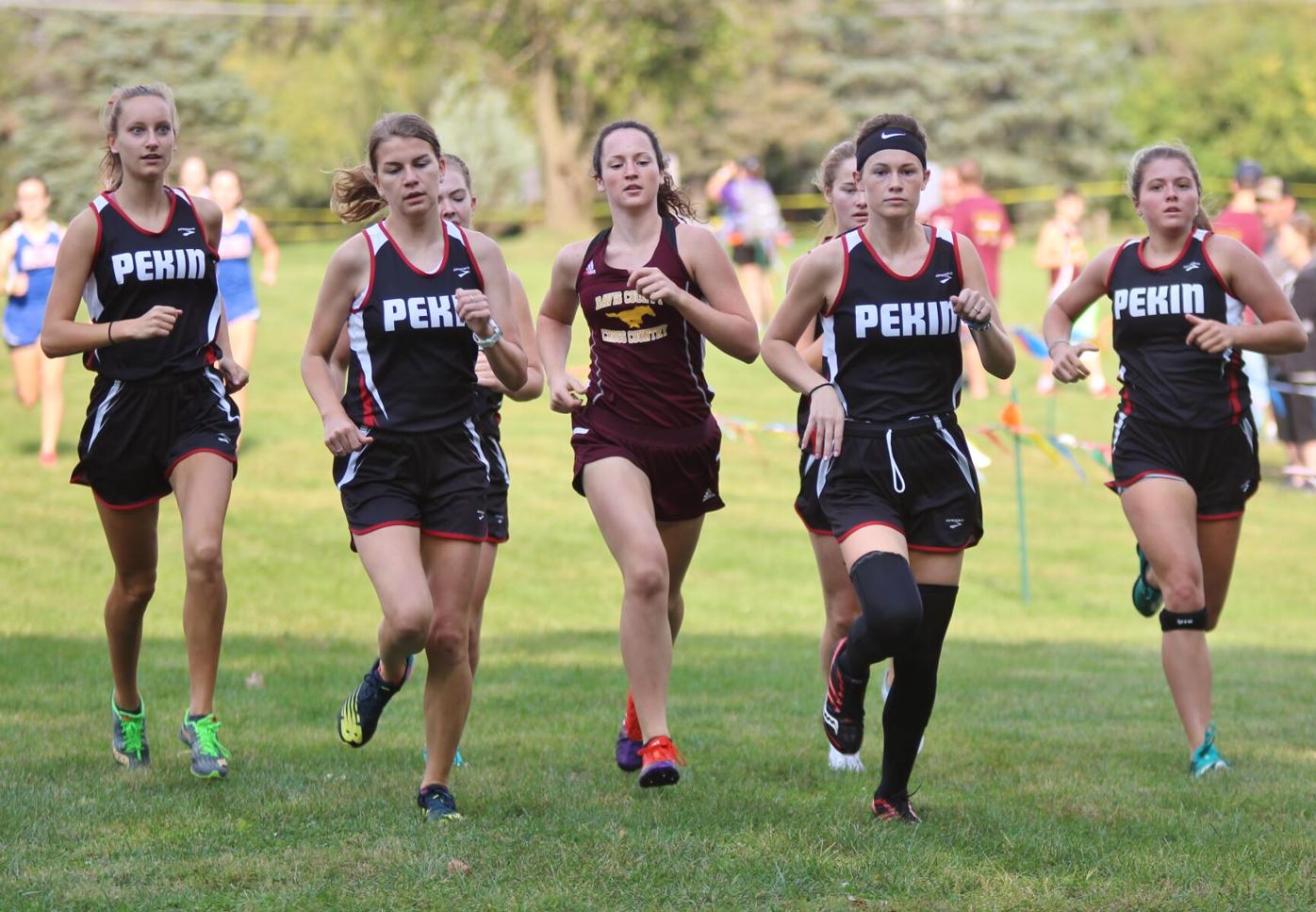 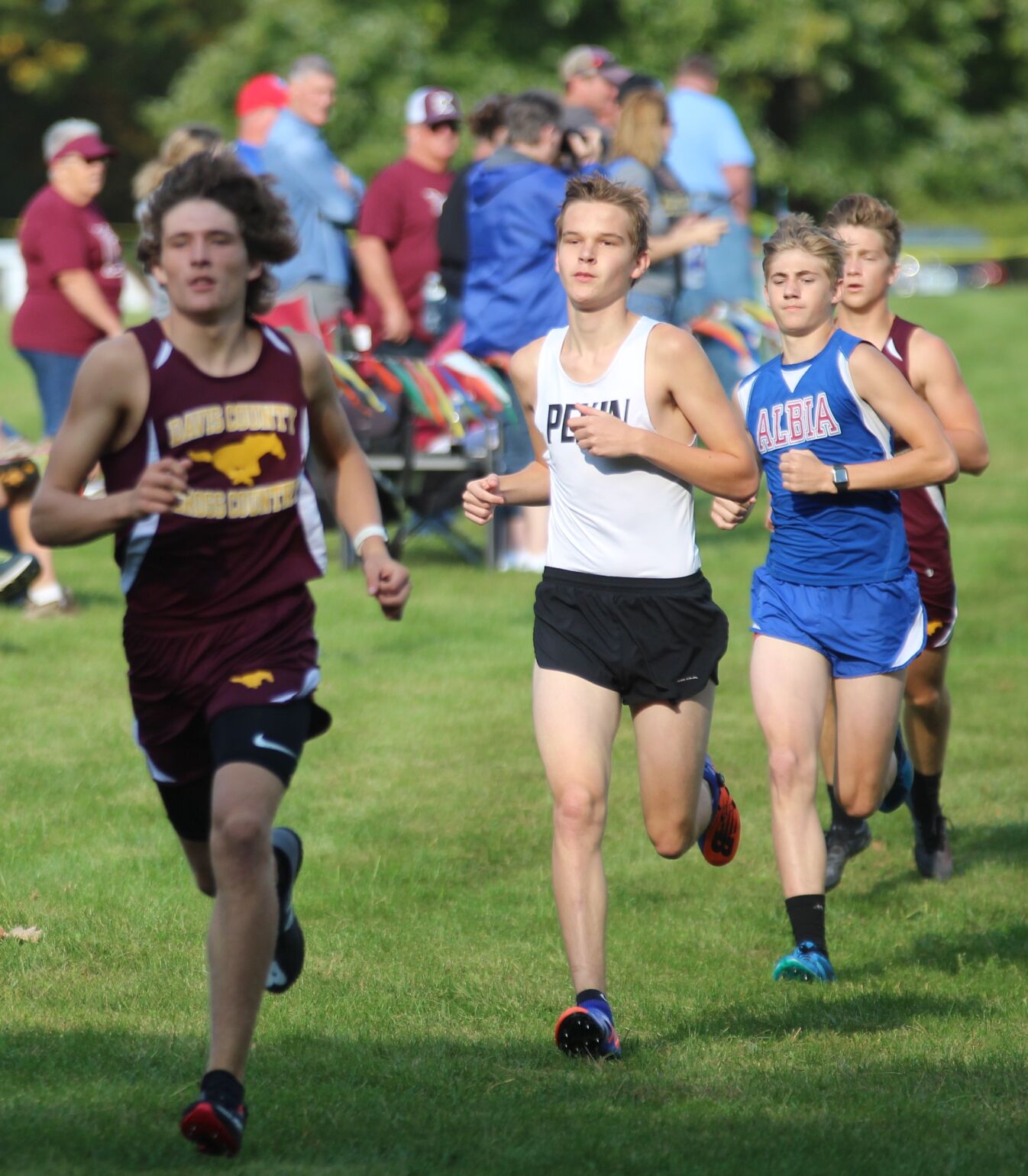 That's how Lauren Steigleder described Saturday's annual Grade Race hosted by the Pekin cross-country program. The Panthers welcomed in Davis County, Albia and Highland to Waterworks Park for the unique meet that pits runners in eight separate high school races and four different middle school races as male and female runners competed to see who was the fastest in each class from seniors to seventh graders.

Steigleder, who has been up near the front already in several races for the second-ranked (1A) Pekin girls, experienced a new feeling on Saturday by running out in front of everyone in the freshman girls race. The winning run of 21:46 was 49 seconds better than Panther teammate Audrey Fariss, the second-fastest freshman female runner on the day.

That didn't stop Strigleder from worrying that her first high school varsity win might slip away even with the finish line in sight.

"The most stressful part was worrying about someone passing me," Strigleder said. "Audrey is a really good runner. We push each other every day. It feels a little different to win a high school race."

Steigleder was hardly the only runner to experience a win for the first time on Saturday. Pekin finished the day claiming five team titles including a sweep of the boys and girls team titles among the seventh-grade and freshman classes with Isaac Gentry joining Steigleder as a first-time freshman winner for the Panthers, beating out teammate Jaedon Wolver by nine seconds in a time of 18:51.

"We've got a lot of really good runners in our class," Gentry said. "Jaedon really stepped it up last year and took over. This year, we've kind of been going back and forth. The girls also have a ton of great runners.

"This is one my favorite meets. I don't have to worry about Zack (Wise) or Brady (Millikin) and all the seniors and juniors on our team. I can focus on competing with all the kids I'm going to be running against for the next three years."

Millikin went out a winner in his final grade race, adding the senior boys title to wins in the freshman and sophomore races in previous years. The seventh-ranked runner in Class 1A opened the day beating Davis County teammates Weston Shively and Mike Amsden by well over a minute in a time of 17:20 to open a day that would end with Millikin's younger brother, Cole, winning the seventh-grade boys race over teammate Eric Derscheid in 10:58.

"I remember when I won this race the first time, it was a huge confidence boost for me," Millikin said. "I remember it helped carry me forward through that season, which has helped push me to work even harder at being even better each season after that. Hopefully, it will have the same effect on our younger runners."

Abby Guise added a win for the Panther middle schoolers in the seventh-grade girls race, edging Albia's MaKenna Montgomery by just four seconds in 11:16. The Pekin girls shined with its strongest class, winning the junior girls team title with five of the top six runners in the field.

"What I like the most about this meet is it gives a chance for the kids to run with everyone in their same grade and have a good time doing it," Pekin head cross-country coach Davis Eidahl said. "You don't have to do a lot of speeches to pump the kids up. You just want the kids to go out there and run, have fun and enjoy cheering for each other before getting things ramped back up again."

Lily Farris won the battle of talented junior girls beating out Davis County's Macy Hill by 15 seconds and Panther teammate Lauren Derscheid by 34 seconds. The winning run of 21:19 took a lot out of Farris, who collapsed after crossing the finish line to clinch her first career high school win.

"I always give everything I've got during the race. My body just gives out at the end," Fariss said. "Lauren and I usually always go back and forth. It's a pretty great sense of accomplishment because I'm always gunning for her. We're always racing."

Davis County, the only other area program with ranked boys and girls teams, had their share of success on Saturday. The sixth-ranked (2A) Davis County boys brought home team titles for producing the top eighth-grade sophomore, junior and senior scores while Addison Stuchel's first career win over teammate Makayla Bachman in 22:08 lifted the 11th-ranked (2A) Mustang girls to the sophomore girls team title.

"It's the same mentality going into every race that you have to go in and be competitive to try and get that win. I think you can get a little confidence boost knowing that you're going in to race against runners in your grade," Stuchel said. "In the end, it's the same 3.1 miles and you still have to do your best."

"This was another great meet for our team," Davis County head cross-country coach Josh Husted said. "They are like a train going through meets and getting faster and faster as they compete. We are 100-percent healthy right now and they are performing at top notch getting ready for (the South Central) conference (meet)."

Albia finished a busy week of action with three meets in five days bringing home the eighth-grade girls team title with Serene Thompson (11:30), Christa Grovewold (11:52) and Olivia Sheffield (12:09) providing the Lady Dees with a top-three sweep. John Pistek picked up the only win on the day for the Blue Demons, earning his first victory in the sophomore boys race in 19:28 beating Davis County's Drake Hamm by 62 seconds.

"It was different running out in front, having that cart out in front of you leading the way the entire race," Pistek said. "I didn't know I was that far out in front of everybody. I knew I had a chance to win. To show you're the best in your class is pretty exciting."

"I know these kids are exhausted right now, but I they've definitely improved this week," Albia head cross-country coach Todd Ratliff added. "We're hoping for another exciting finish to our season."