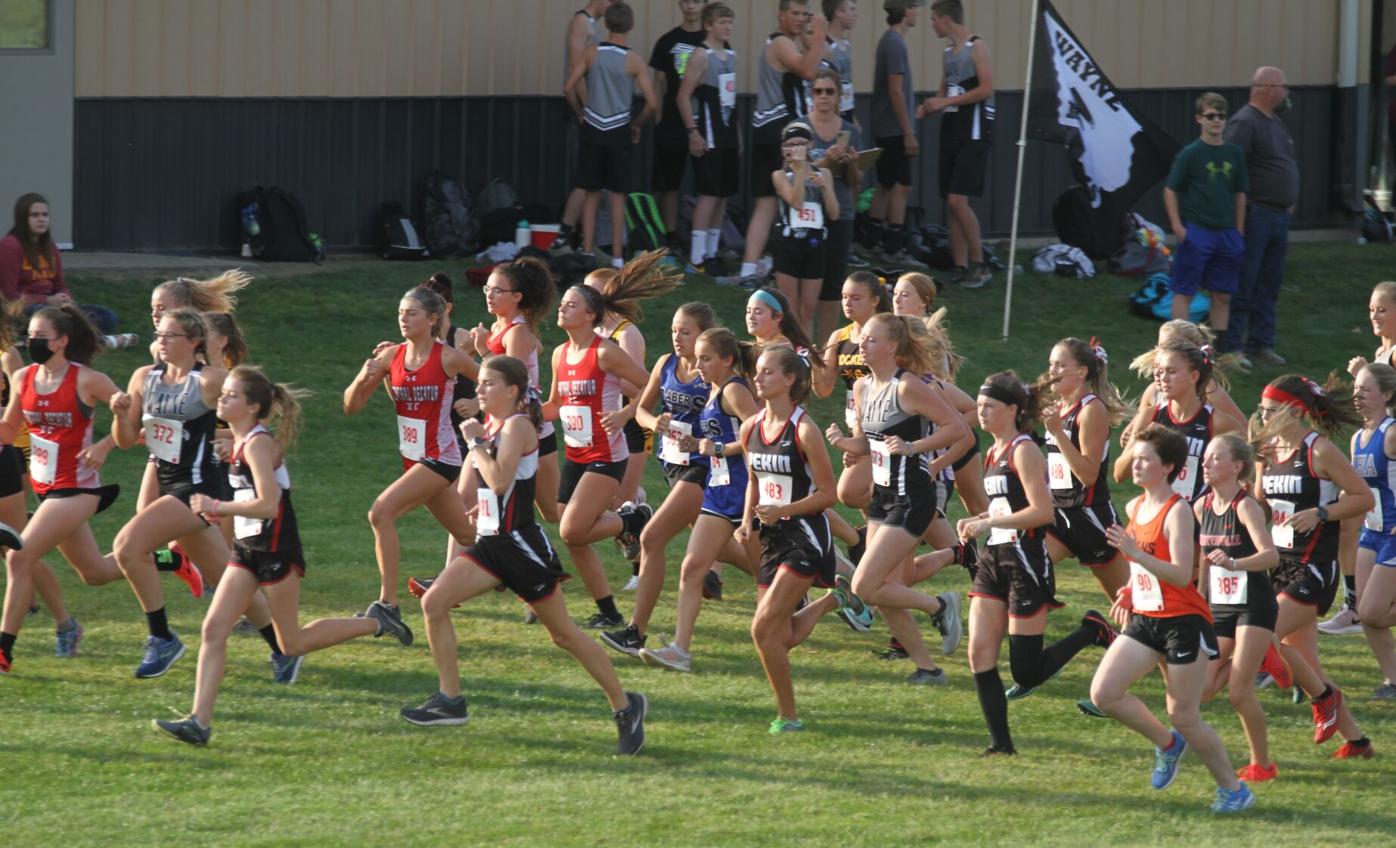 Runners take off at the start of the high school varsity girls cross-country race at the Eddyville-Blakesburg-Fremont Invitational on Tuesday. The second-ranked (1A) Pekin girls would join the fifth-ranked (1A) Pekin boys in winning the team championships at the meet in Eddyville. 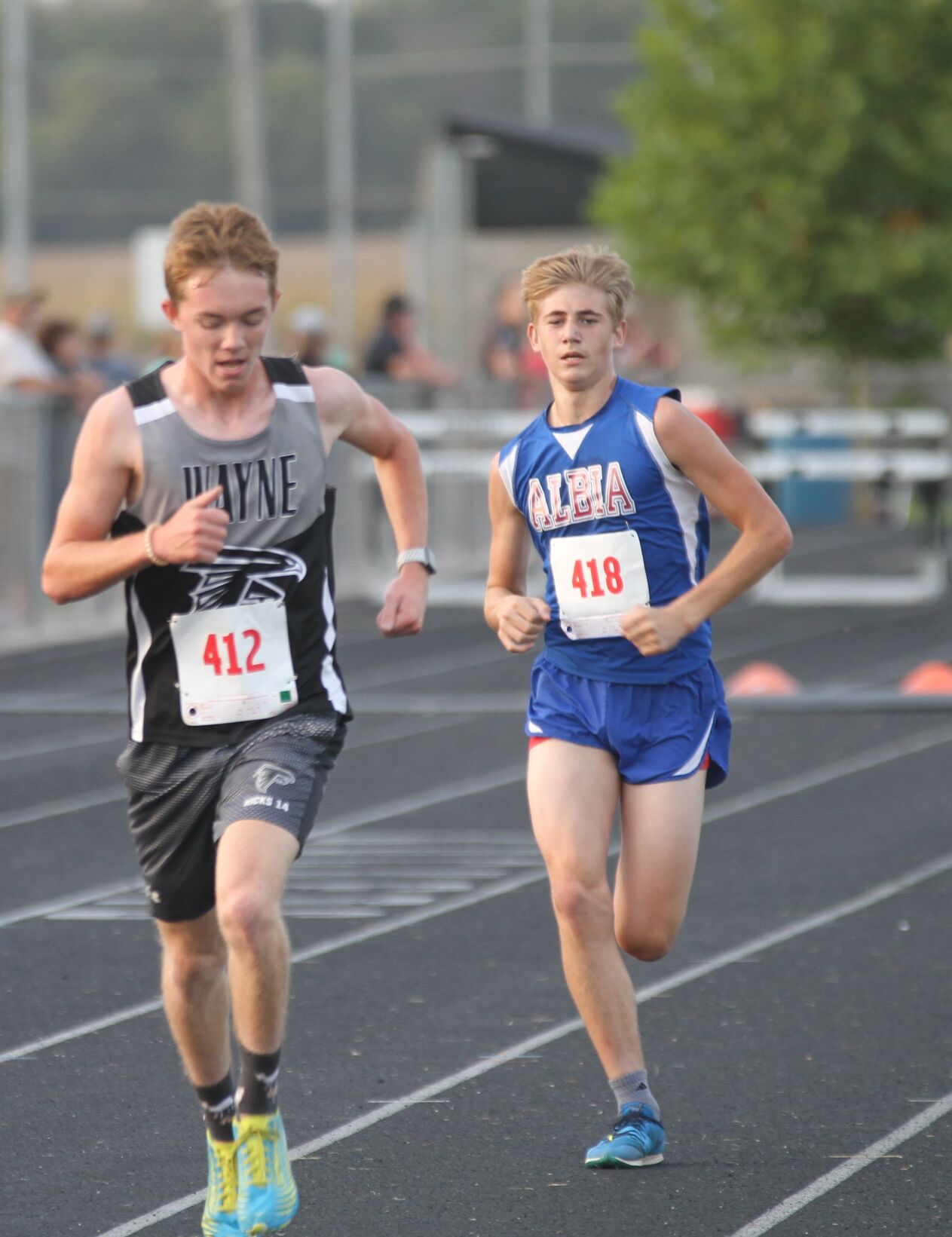 Runners take off at the start of the high school varsity girls cross-country race at the Eddyville-Blakesburg-Fremont Invitational on Tuesday. The second-ranked (1A) Pekin girls would join the fifth-ranked (1A) Pekin boys in winning the team championships at the meet in Eddyville.

EDDYVILLE — Alexis Kauzlarich is hopeful that there are even bigger cross-country meets to be held at Eddyville-Blakesburg-Fremont High School.

Davis Eidahl was certainly impressed with the invitational put on by the Rockets. The longtime head coach of the Pekin cross-country program watched his Panthers pick up a pair of championship trophies in their first trip to the EBF Invitational with nine runners crossing the finish line on the track at Ike Ryan Field in the top 10.

"It was a different type of meet, but I liked it," Eidahl said. "It was kind of a cross between cross-country and track. The kids like it really well. I thought our kids competed hard, and that's always what I look at when you come to a meet."

Kauzlarich, in her third season as head coach of the EBF cross-country program, has seen the development of the program run parallel with the development of a course to run on the grounds of the school. Athletes on Tuesday took off in the wide open space between the high school and Ike Ryan Field and ran around the outer perimeter of the school up the school's disc golf course that runs along the outside of the EBF baseball team's Ron Welsch Field before heading through a tree line, eventually running past the EBF football practice field and the EBF softball diamonds.

Runners than returned around the outside of Ike Ryan Field for a lap before heading on to the track, the same one that has hosted several state-qualifying track and field meets over the past decade. Kauzlarich wouldn't mind seeing the state look at Eddyville as a possible site to determine state cross-country berths in the future.

"We've had some quality programs come to our meets and the schools have really loved running the course," Kauzlarich said. "It's nice for our kids. They don't have to travel and get on a bus to practice. We saw a lot of community members out here supporting us. I couldn't ask for a better school and better community support. I'd love to have the state come down here and see how good a show we put on. It's because of those same community members that has allowed us to host so many state-qualifying track and field meets. I feel like we have the course and the support staff that could be a very good host for those district and regional cross-country meets."

Pekin will have the chance to host one of those state qualifying meets next month at Wildwood Park in Ottumwa. The Panthers figure to be heavy favorites to qualify for state as evidence on Tuesday with a 47-point win (15-62) over Central Decatur for the girls title and a 22-point win (50-72) over Albia for the boys title.

"We have the best balance of any team in the state on the girls side. We just need a couple of girls running in the 19-20 minute range, which we can do," Eidahl said. "It's still early yet. We've still got 30 days until the state qualifier."

"I've actually kind of been disappointed with my times in the last couple of meets," Derscheid said. "This felt good. It felt good to be back up there near the front once again."

Brady Millikin led the Pekin boys to a team title, leading four Panthers who placed in the top 10. Millikin, ranked seventh in 1A, finished third in 17:29.75 racing for the second straight meet against third-ranked (1A) Southeast Warren senior Randy Jimenez, who beat out fifth-ranked (2A) Central Decatur junior William Gillis by 18 seconds on Tuesday winning the EBF Invite boys race in 16:54.37.

"Seeing some of the best runners in the state gives me an idea of where I'm at right now and where I want to be at by the end of the season," Millikin said. "That's the bad and I need to get there."

Dawson Bonnett led Albia to a runner-up finish, working with Wayne runner R.C. Hicks to move into the top five. Hicks edged Bonnett in the end by less than a second with Hicks finishing fourth in 18:15.6 while Bonnett placed fifth in 18:15.96.

"It's not the first time I've run with (Hicks). We talked before the race and worked together to chase down a few runners during the race," Bonnett said. "When you can run together with someone, it helps you keep a pretty steady pace. It gives you someone you try to stay with and someone you can try to outrace at the very end."

The Albia girls finished third as a team with 83 points, led by Avery Major who placed 20th in 24:54.94 edging out Lady Dee teammates Juliana Brown by 8.34 seconds and Brooke Smith by 15 seconds. Abby Jager led EBF to a sixth-place finish as a team with 151 points, paced by freshman Abby Jager who finished 23rd in the girls race in 25:11.27.