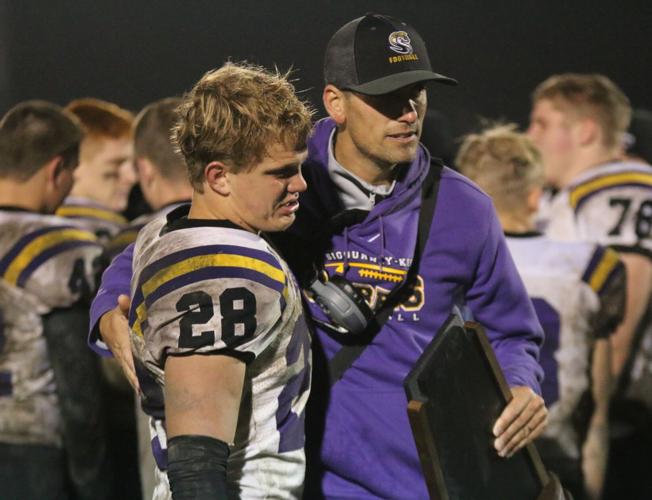 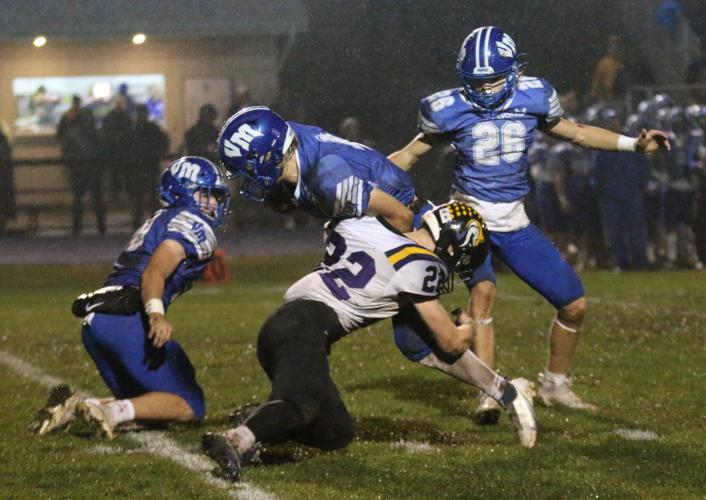 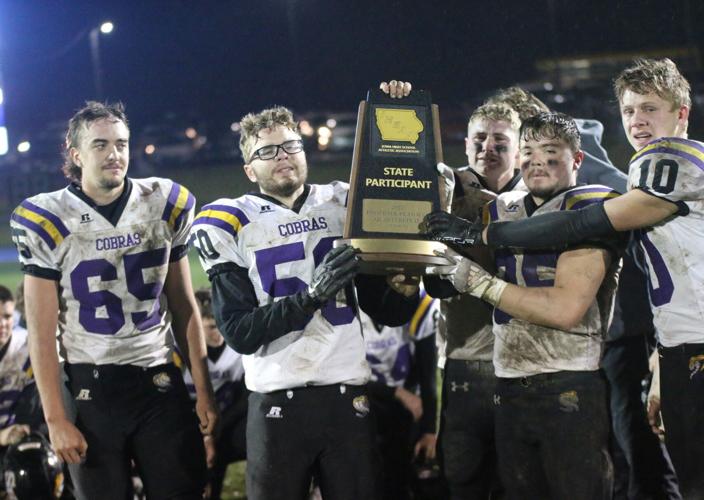 Members of the Sigourney-Keota football team hoist the state participant trophy in the air following the conclusion of the season on Friday in the Class 1A state football quarterfinals at Bulldog Field in Van Meter. 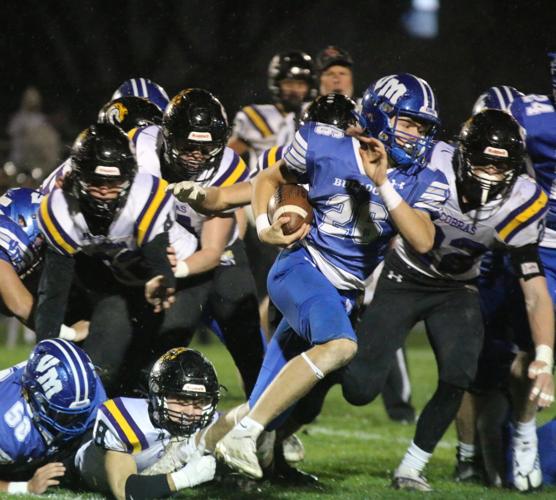 Ben Gordon (26) runs with the football for Van Meter during Class 1A state quarterfinal round against against Sigourney-Keota on Friday at Bulldog Field in Van Meter.

Members of the Sigourney-Keota football team hoist the state participant trophy in the air following the conclusion of the season on Friday in the Class 1A state football quarterfinals at Bulldog Field in Van Meter.

Ben Gordon (26) runs with the football for Van Meter during Class 1A state quarterfinal round against against Sigourney-Keota on Friday at Bulldog Field in Van Meter.

VAN METER — Before the season began, there were some that felt that Sigourney-Keota might barely make the playoffs.

"We heard there were people picking us to finish fourth in our own district," S-K senior Cole Clarahan said.

For the third straight season, S-K finished as one of the top eight teams in all of Class 1A. The Cobras finished one win short of the UNI Dome for the second straight year, however, falling on the road to second-ranked Van Meter as an early punt return for a touchdown by Carter Durflinger set the tone for a 54-0 win on a soggy night at Bulldog Field.

"That's not how we wanted to start, but you have to give them a lot of credit for making a play," Clarahan said. "These are just good. They just found a way to make plays. They're tough. They have the skill of a Class 3A team. They have size, they have speed and they're physical as hell."

As a result, Van Meter (10-1) would continue to methodically march down the field throughout the first half. While holding the Cobras without a first down throughout the opening 12 minutes, the Bulldogs needed seven plays on each of the next two possessions to reach the end zone twice more when a three-yard touchdown run by Ben Gordon and a 12-yard touchdown pass by Ben Gilliland building a 21-0 Van Meter lead heading into the second quarter.

"It says a lot about our coaches. They put in a great game plan for us every week," Durflinger said. "It lets every team left in the playoffs know that, we may have lost a couple guys from last year, but we're still here and we're ready to compete."

Gordon carried Van Meter the rest of the way, scoring the next three touchdowns on runs from nine, three and 70 yards out opening a 42-0 Bulldog lead 13 seconds into the second half. Gordon closed out the night rushing for 168 yards on 17 carries, doubling the total rushing yards of the entire Cobra team. S-K finished gaining just 91 total yards on 43 plays in the contest, rushing for just 84 yards on 36 carries led by a 23-carry, 58-yard rushing night for Clarahan.

"It just wasn't our night," Clarahan said. "I know Van Meter is going to be able to put up a hell of a fight with anybody else they have to face."

Fellow senior Jack Clarahan led S-K with 11 total tackles, including a game-high 10 unassisted stops against the physical Bulldogs. The season-ending loss snapped an eight-game winning streak for the 8-3 Cobras that started with a 35-7 win over eight-win 2A state quarterfinalist Centerville and was extended last Friday with a thrilling 20-14 overtime win over Mediapolis clinched on a fourth-down stop short of the goal line on the final play of the game.

"We could have fallen about after the first two weeks of the season, but we know what kind of kids we have," S-K head football coach Jared Jensen said. "They're talented. They're bought in. They're going to continue work. That's what they did all season long."

Van Meter will head to Cedar Falls on Friday to face West Branch (11-0) in the 1A state semifinals at 10 a.m. Sigourney-Keota will look to be back next year hoping to secure a trip to the UNI-Dome in the fall of 2023 while saying goodbye to nine seniors (Jack Clarahan, Cole Clarahan, D.J. Hammes, Karson Weber, Aidan Anderson, Clay Morse, Matt Brainard, Clayton Visser and Carter McCoid) that helped the Cobras find their stride after an 0-2 start to the season.

"I know it didn't end for the seniors, but they have a lot to be proud of this season," Jensen said. "They took those steps, took the younger guys and helped lead them to the promise land. I don't know if there were too many people that would have picked us to be playing in the state quarterfinals this year. It just goes to show that our kids are committed.

"It's not just about showing up when football starts. They're working all year long. That's where we're at as a program. These kids are committed to achieving that one goal. That's the culture of this program to meet and exceed the expectations we set for ourselves."

Big Reds fall to No. 1 Williamsburg in 2A quarterfinals

WILLIAMSBURG — Soggy conditions proved to be problematic for the Centerville football team as the Big Reds struggled to hold on to the ball against top-ranked Williamsburg on Friday in the Class 2A state quarterfinals.

The Raiders forced five turnovers and took advantage of four consecutive drives that started on Centerville's side of the field, building a 28-point halftime lead on the way to a 35-0 win preventing the Big Reds from making the program's first trip to the UNI-Dome for the state football semifinals.

Brody Tuttle led Centerville with 51 yards rushing on 21 carries, but completed just one of eight pass attempts for two yards. The Big Reds gained just 58 yards against the Raiders while quarterback Carson Huedepohl accounted for four of the five touchdowns scored by Williamsburg, rushing for three scores and 102 total yards on 19 carries.

Williamsburg (11-0) faces Wahlert Catholic (9-2) on Saturday in Cedar Falls in the Class 2A state semifinals at 10 a.m. Centerville ends the season with a final record of 8-3, including the program's first road playoff victory earned in a 28-27 comeback win at Monticello last week.