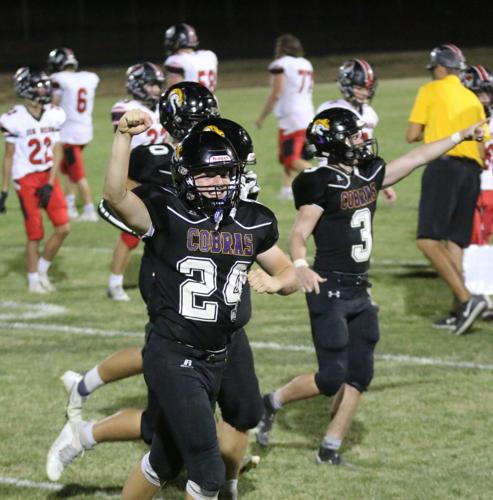 Sigourney-Keota junior quarterback Sawyer Stout (24) leads the Cobra football team off the field to celebrate a 42-7 win over Centerville on Friday night at 'The Snake Pit' in Sigourney. 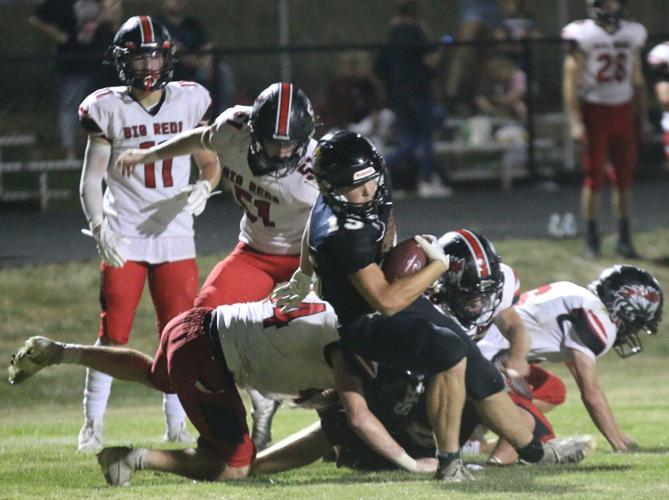 Sigourney-Keota junior Cole Kindred (15) looks to gain yards while attempting to avoid being tackled by the Centerville defense on Friday night during high school football action at 'The Snake Pit' in Sigourney. 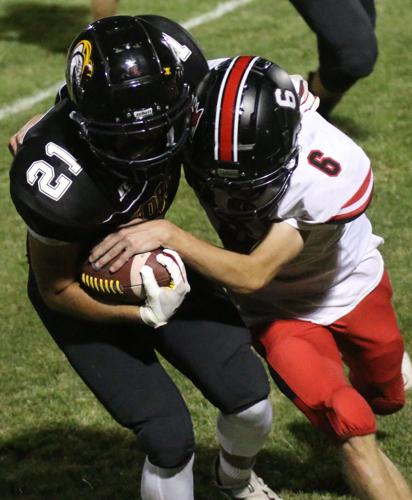 Sigourney-Keota sophomore Issac Bruns (21) looks to hold on to the football near the sidelines against the defense of Centerville senior Mark Susin (6) on Friday night at 'The Snake Pit' in Sigourney. 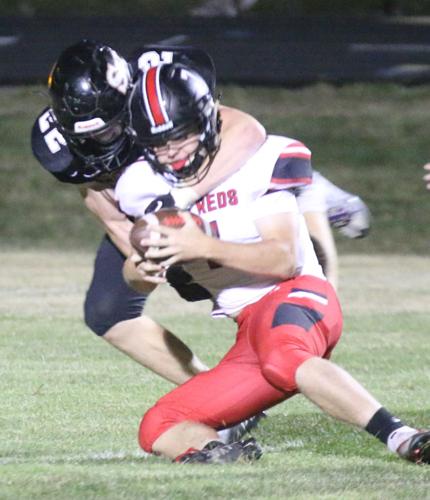 Sigourney-Keota junior quarterback Sawyer Stout (24) leads the Cobra football team off the field to celebrate a 42-7 win over Centerville on Friday night at 'The Snake Pit' in Sigourney.

Sigourney-Keota junior Cole Kindred (15) looks to gain yards while attempting to avoid being tackled by the Centerville defense on Friday night during high school football action at 'The Snake Pit' in Sigourney.

Sigourney-Keota sophomore Issac Bruns (21) looks to hold on to the football near the sidelines against the defense of Centerville senior Mark Susin (6) on Friday night at 'The Snake Pit' in Sigourney.

SIGOURNEY — Now you see it. Now you don't.

It wasn't magic that lifted Sigourney-Keota to its first win of the season on Friday, however. It was recognition and execution.

Facing third-and-14 early in the third quarter protecting a 14-7 lead against visiting Centerville, the Cobras ran just their fifth passing play of the game. What started out as a simple eight-yard pass out in the flat to Clay Morse, however, turned into a game-changing 59-yard touchdown pass that kicked off a dominant second half for S-K in a 42-7 win over the visiting Big Reds.

"We had been trying to press the downfield quite a bit. Some of the guys suggested it. They saw they (Centerville) were bailing out, so let's hit a cross. We had our tight ends cross, pressed one vertical, drew some bodies deep and Clay made a great catch."

Had been Morse been stopped in his tracks, or shortly after making the eight-yard catch, Centerville still could have stopped the play shy of a first down. The senior tight end, however, would not be denied taking off down the sidelines before receiving a key block from Aidan Anderson to clear the rest of the path for the run to the end zone that put S-K up 21-7 with 9:13 left in the third quarter.

"Clay doesn't look like he's fast, but that kid has some wheels," Jensen said. "We knew we needed something. We knew that (Centerville) was going to cover a little deep on that play. We just hit him underneath and Clay made the rest work."

S-K (1-2) would not look back after Stout's third touchdown pass of the game. The Cobras dominated up front throughout the remainder of the game, allowing just one total yard to Centerville's offense while racking up over 200 yards with a pair of touchdown runs by Cole Clarahan putting the game completely out of reach midway through the fourth quarter as S-K scored 28 unanswered points in the second half.

"I'm giving everything to my offensive line," Stout said. "They were great all night. They were physical. It was just an awesome game for us."

Stout made the most of six pass attempts in the contest, finding Anderson on a 36-yard touchdown pass midway through the first quarter before connecting with Cole Kindred on a 33-yard scoring toss early in the second quarter, giving the Cobras a 14-0 lead. All told, Stout finished 4-6 passing for 131 yards as S-K gained 166 total yards through the air while adding 266 yards on the ground running the single wing at the Big Reds.

"It's such a dynamic part of our offense. Aidan and I had talked about it all week. We knew that play is going to go long every single time we throw it because teams aren't ready for it," Stout said. "Teams are expecting us to just run it down their throats, but our passing game can work too."

S-K appeared poised to deliver a knockout shot in the second quarter after stopping Brody Tuttle on a fourth-down quarterback sneak on Centerville's own 35. The Big Reds defense responded, however, as Jax Mosley and Daniel George teamed up for an 11-yard sack of Stout on fourth down for S-K putting the ball back in the hands of the Centerville offense.

The Big Reds took advantage, driving 58 yards in 10 plays including a 29-yard catch by Griffin Weber and a seven-yard completion inside the S-K five-yard line by Conner Stephens. Tuttle would gain the final three yards on a quarterback keeper with 2:30 left in the first half, cutting S-K's lead to 14-7.

"For the most part, our effort was great. We played hard against a good football team that is a perennial playoff power," Centerville head football coach Matt Kovacevich said. "We just got a little gassed in the second half, but I'm proud of our kids and I'm proud of our effort. Bigger and better things are on the horizon for us."

Centerville (2-1) returns home seeking to regain the pennant from Davis County (2-1) next week at Paul Johnson Field in the Class 2A, District 6 opener for both teams. S-K opens Class 1A, District 6 play next Friday at home against Pleasantville.