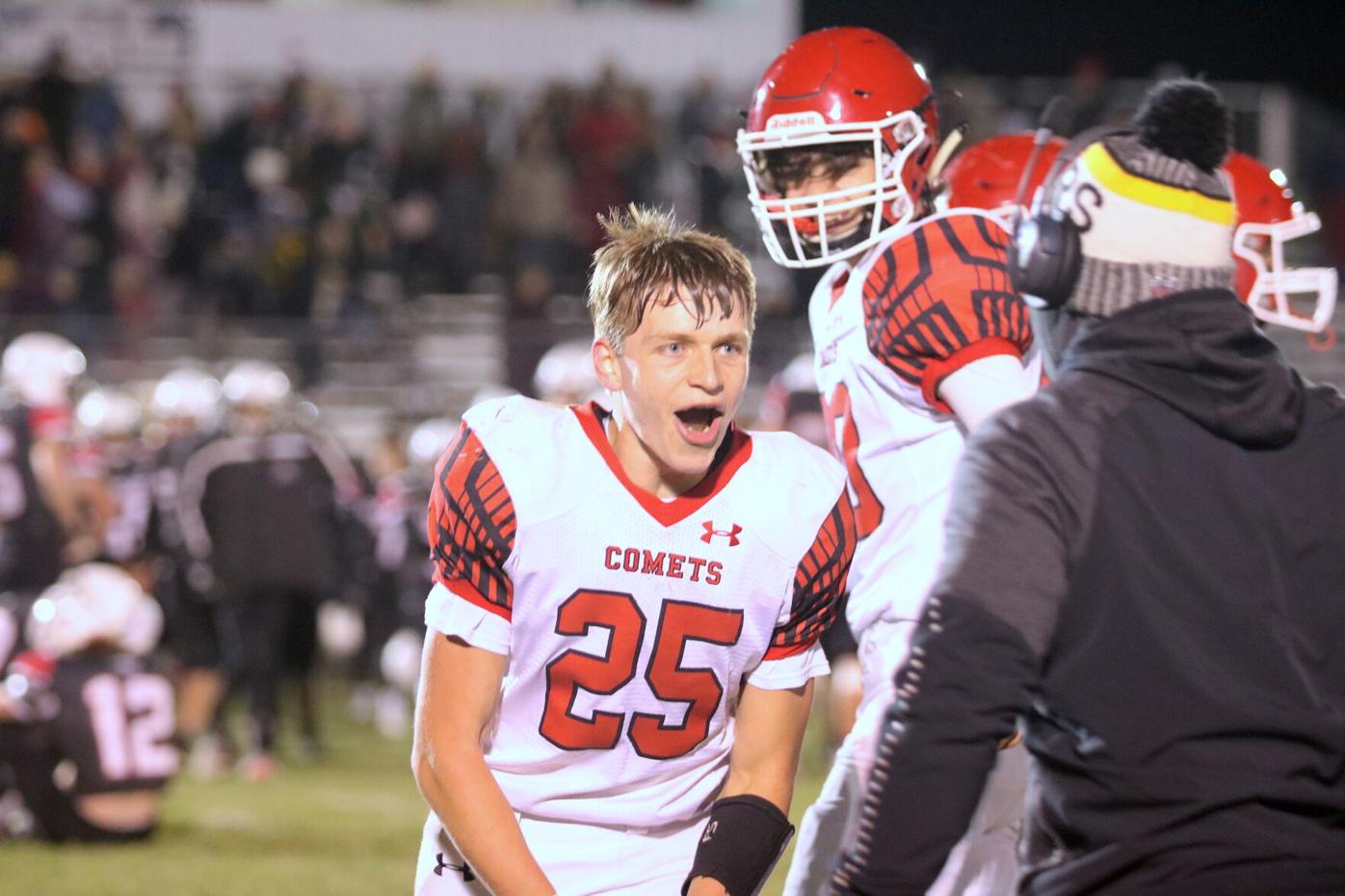 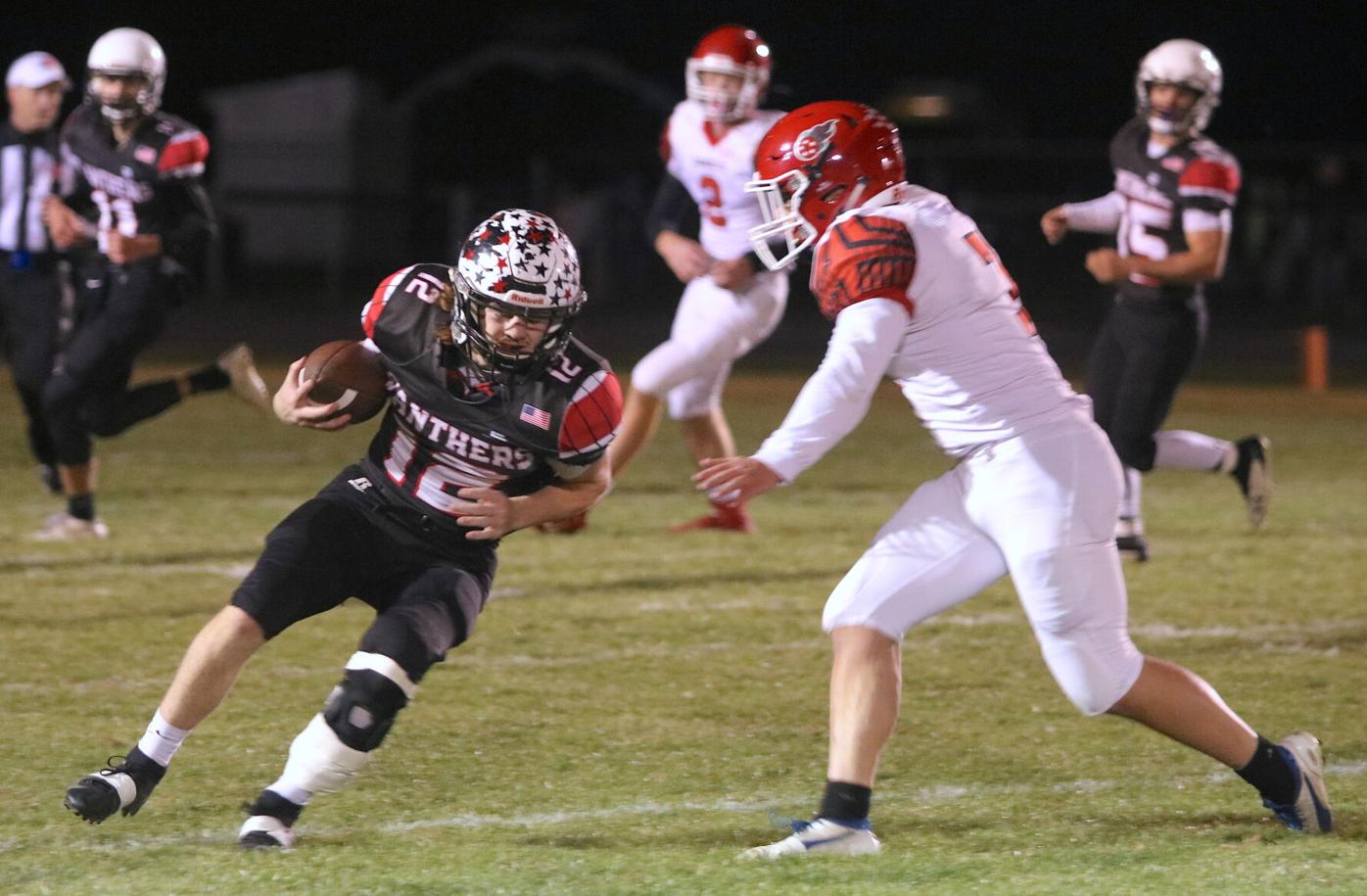 The Cardinal High School football team doesn't care how many years it was. The Comets finally vanquished their biggest foe.

Maddux Jones had a hand in five of Cardinal's six touchdowns, including a 21-yard score after Pekin came up short on a fake punt with the game in the balance late, and the Comets held off the Panthers 38-29 in a Class 1A first-round playoff game Friday at Tom Stone Field.

Not only was it Cardinal's first win over Pekin since the 1970s, the game also marked its first postseason win. The Comets (5-3) will visit No. 3 Sigourney-Keota (7-0) in next week's second round.

"(Coach) Landon (Miller) has pushed us in the summer from day one, that we have to be a bigger and better team," said Jones, threw for a pair of TDs, ran for two and had a 91-yard scoop-and-score touchdown. "Everyone on the team helped, the fans cheering us on, that really motivated us."

The teams did not play each other during the regular season as the contest was canceled because of COVID-19 circulating through Pekin's team. The Panthers (3-4) bookended their season facing spread offenses, which proved to be tough matchups.

"You could tell early in the game it would be a game of breaks," Pekin coach Brent Blakely said. "Both teams went through some adversity and we had them on their heels a little bit. You just hope you're on the right side of it at the end of the game, and it just happened to be them.

"Our best defense tonight was to keep their offense off the field."

The biggest swing in the game came with just under eight minutes left and Pekin inside the Cardinal 10. But the Panthers fumbled, Jones picked it up and took it all the way back, putting the Comets up 32-21.

"Someone had to do something, so I just ran as hard as I could," Jones said. "Our seniors didn't want this to be their last game."

Pekin quickly went back down the field, as Michael Jones' 5-yard run pulled the Panthers within a field goal. Cardinal then fumbled deep in Pekin territory on the next series, but the Comets' defense stood tall in the final four minutes, with an interception sealing the win.

"Anything can happen in any sort of time," Jones said. "We just pushed ourselves as hard as we could those last few minutes of the game. Pekin is a good team and they played hard."

The Comets opened the scoring on a 4-yard touchdown pass from Jones to Christian Bowman, then after Cael Baker's TD run put the Panthers on the scoreboard, Jones connected with Griffin Greiner on a short slant pass that went 53 yards for a touchdown as time expired in the opening quarter.

Pekin led 13-12 at halftime and the seesaw continued in the second half with three lead changes. However, Cardinal was able to get a defense stop between touchdowns to give itself an 11-point lead.

"When you get down by two scores, that can be a dilemma for us with our style of play," Blakely said. "We felt pretty good there with about four or five minutes left, but we weren't able to make the play when we needed.

"Too many penalties tonight, too many mental mistakes," he said. "But my kids played hard, and that's all I can ask."

Pekin's season was an adventure, but the ability to have a season at all when it was questionable early in the summer was a blessing.

"It's been the kind of year I don't want to have again," Blakely said. "But it's everyone. Your kids are your kids. We have first-class gentlemen coming out of our program, and that's our No. 1 goal.

"Cardinal has made improvement and that's a good thing, for all of us," he said. "We're better for it. They had a great game plan tonight."

Cardinal still has goals in front of it. The Comets will look for a different result against the Cobras, who blew them out 68-8 to finish the regular season. By halftime, Jones said, the Comets had their reserves in the game.

"I think we have a lot of confidence for that game, especially beating Pekin and winning our first playoff game," he said. "We're pretty much 100%."

SIGOURNEY [mdash] Larry Klein, 84, of Sigourney, died Sunday at his home. Public visitation 10:00 a.m. until 12:00 p.m. on Friday, October 30, at Powell Funeral Home in Sigourney. Mask and glove usage will be required. www.powellfuneralhomes.com.