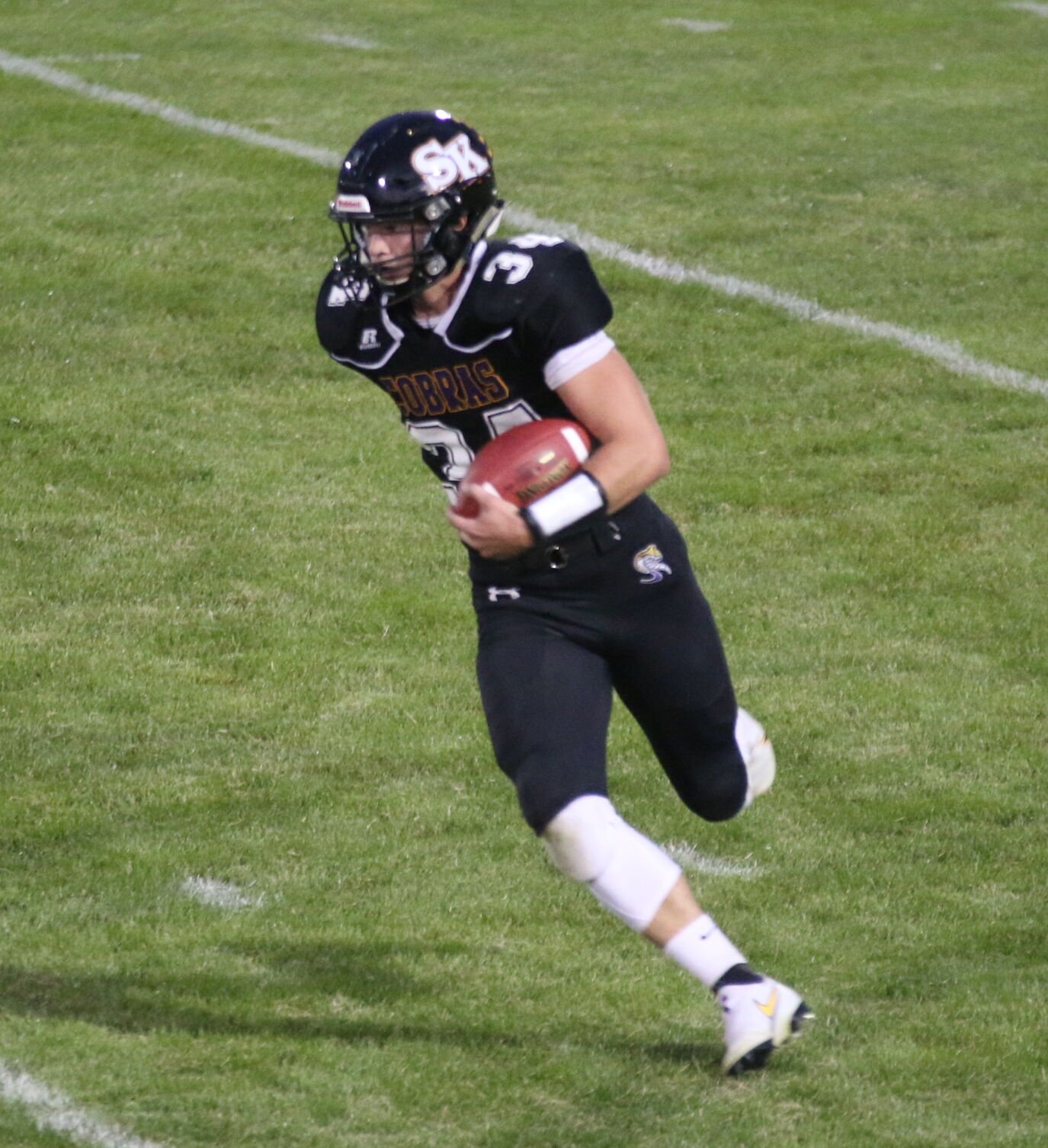 Brady Duwa looks for room to run with the football for fifth-ranked (1A) Sigourney-Keota. 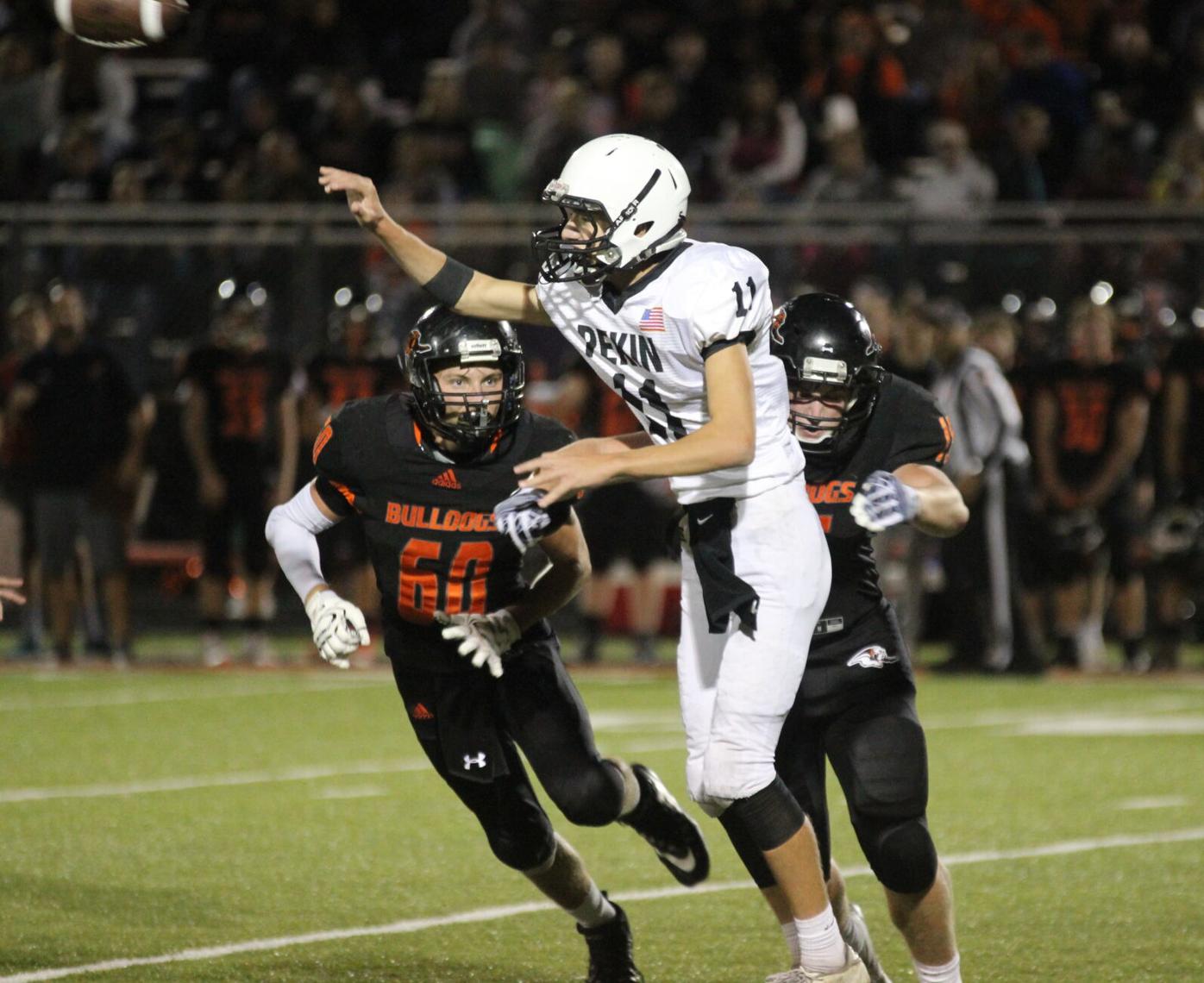 Colton Comstock (11) throws a pass while trying to avoid pressure during prep football action for the Pekin Panthers.

Brady Duwa looks for room to run with the football for fifth-ranked (1A) Sigourney-Keota.

Colton Comstock (11) throws a pass while trying to avoid pressure during prep football action for the Pekin Panthers.

PEKIN — One showdown in the books. One more to go this week.

Fifth-ranked (1A) Sigourney-Keota maintained a perfect record, improving to 5-0 for the second straight year by winning the annual Backyard Brawl against Pekin on Friday night at Tom Stone Field.

S-K has won two in a row against the Panthers, winning last year at Schafer Stadium in Ottumwa 34-14 to open an 8-0 start to the 2019 season for the Cobras. Next up for S-K (5-0, 3-0) is a chance to avenge that lone loss of last season, a 28-6 district championship and season-ending setback at home against Mediapolis, as the Bulldogs (4-1, 3-0) return to Cobra field in yet another battle for the top spot in Class 1A, District 6.

Sam Sieren became the latest running back to shine in the Backyard Brawl, following up the efforts in previous years of S-K's J.D. Stout and Pekin's Dayne Eckley. Sieren carried the ball 14 times, gaining 185 yards and scoring four touchdowns on the ground.

Brady Duwa caught touchdown passes from Cade Molyneux (55 yards) and Colton Clarahan (6 yards). Duwa added a 55-yard punt return for a touchdown, his fourth game this season with a return for a score.

Colton Comstock finished with a career-high 106 passing yards for Pekin (1-3, 0-2), including a 63-yard pass to Joseph Coates. The Panthers face Louisa-Muscatine next Friday before wrapping up the regular season on Oct. 9 at Van Buren County.

DONNELSON — Alex Garman secured a pair of interceptions, including the final pick late in the fourth quarter to secure a bounce-back win for the Rockets after being shut out at Mid-Prairie one week earlier.

MONROE — Andrew Mitchell's game-opening 24-yard interception return for a touchdown set the tone for a dominant night on the gridiron for the unbeaten Mustangs.

PCM's defense forced Centerville to lose a total of 23 yards in the contest on offense, including 22 yards lost on 18 rushing plays.

Aidan Anderson rushed for a 19-yard touchdown in the first quarter for PCM, but was lost for the season when he suffered a leg injury later in the frame. Gatlin Boell tallied 3.5 tackles, three tackles for loss and an interception while forcing a safety during a 36-point opening quarter for PCM.

August Stock was 6-8 passing for 104 yards and two touchdowns while also scoring on a 19-yard touchdown run for the Mustangs. Colby Tool capped the first-quarter scoring with a 1-yard TD run and Sage Burns had a 20-yard scoring run in the second quarter.

Lucas Henderson was a bright spot on defense for the Big Reds, leading Centerville with 8.5 total tackles including eight solo stops. Centerville (2-3, 2-1) returns home to face Clarke next Friday before wrapping up the regular season at Chariton on Oct. 9.

WASHINGTON — Isaac Harris threw a season-high three touchdown passes for the Trojans, including a pair of scoring tosses to Max Weaton in a district loss to the Demons at Case Field.

MONTEZUMA — Eddie Burgess completed 10 of 14 pass attempts for 223 yards and accounted for eight touchdowns, including six scoring passes as the Braves jumped out to a 40-0 lead after one quarter against the Mohawks.

Burgess rushed for 122 yards on eight carries, scoring two more touchdowns on the ground. Kaleb Templeton found Logan Johnson for a 56-yard touchdown pass to put Moravia (0-5) on the board.

The Mohawks host Lone Tree for Homecoming on Friday.

LETTS — Hayden Calvelage scored the first of three touchdown runs in the first half on a 75-yard game-opening dash for the Falcons, who secured the first win of the season while spoiling Homecoming night for the Warriors.

Van Buren County (1-3, 0-3) will head to Cardinal for the Comets' Homecoming game on Friday before hosting Pekin on Senior Night in Keosauqua on Oct. 9.