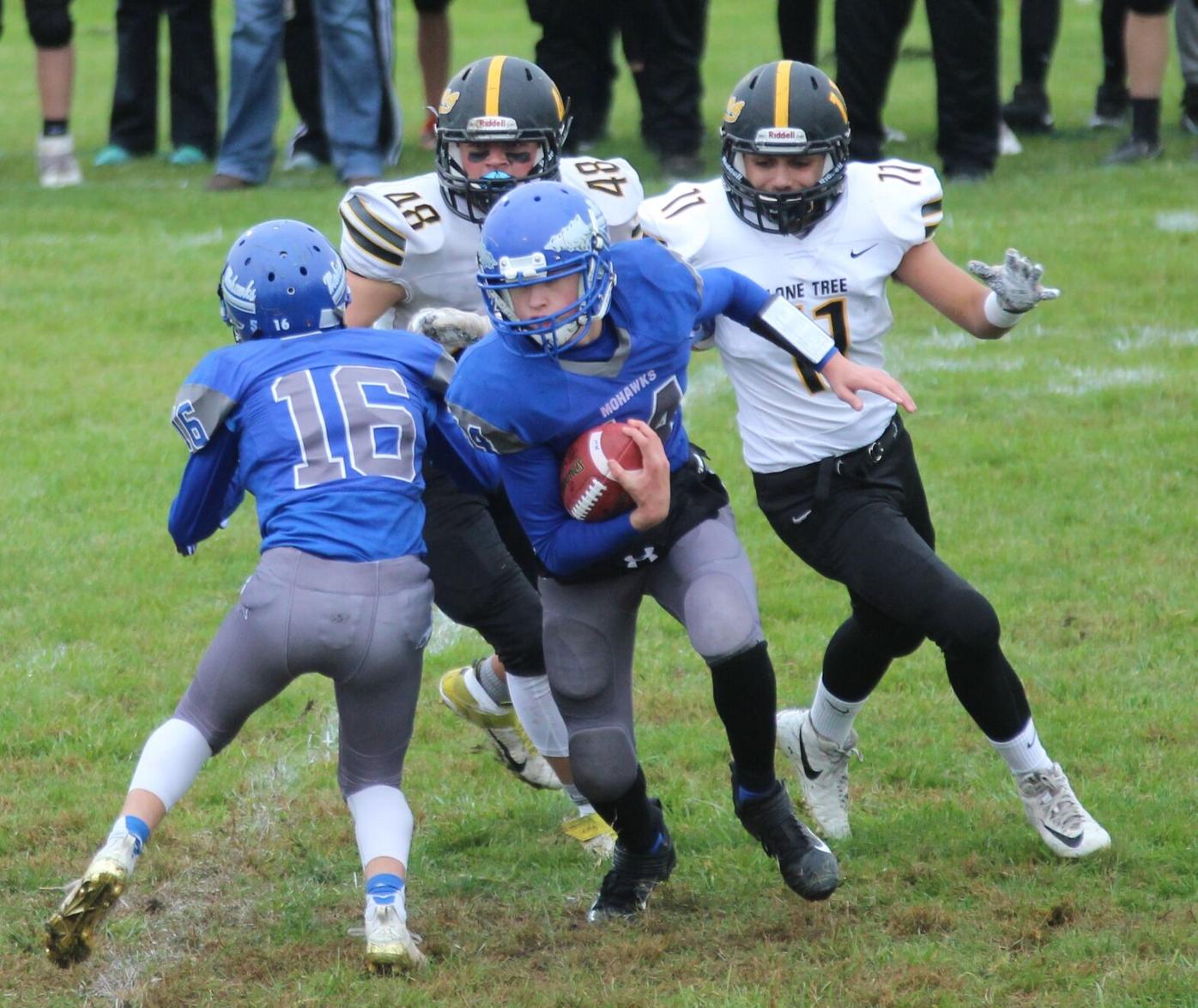 Moravia quarterback Gage Hanes (14) looks to avoid the pressure put on by Lone Tree teammates Tyler Bell (48) and Levi Sotzen (11) while Kaden Whitlow (16) looks to pick up a block during the first quarter of a high school football game on Saturday afternoon in Moravia. 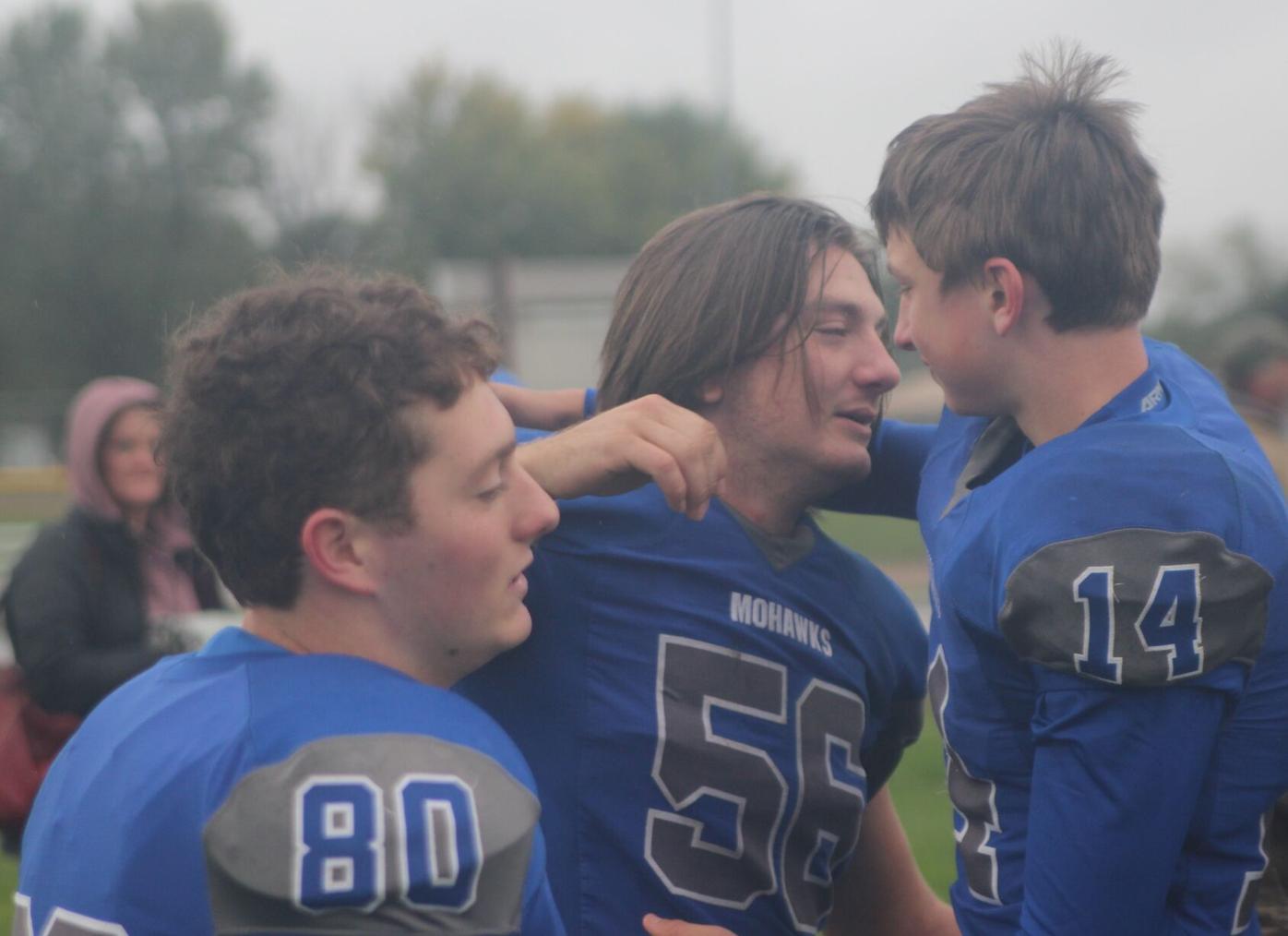 Moravia quarterback Gage Hanes (14) looks to avoid the pressure put on by Lone Tree teammates Tyler Bell (48) and Levi Sotzen (11) while Kaden Whitlow (16) looks to pick up a block during the first quarter of a high school football game on Saturday afternoon in Moravia.

MORAVIA — In a perfect world, the Moravia football team would have busted through their Homecoming banner on a bright, sunny Saturday afternoon before busting through Lone Tree to secure the first win of the 2020 season, sending seven seniors off in style.

Instead, busting through the banner before the game and honoring the seniors afterwards were the only things that matched up with the ideal version of Saturday's final home game of the regular season for the Mohawks. Alex Viner rushed for 182 yards on 17 carries, scoring five touchdowns for Lone Tree in a 52-14 win on a cold, soggy day on the border of Monroe and Appanoose County.

"Our kids battled and I'm proud of how the kids battled. They could have packed it in, but they fought throughout the second half," Moravia head football coach Denny Whitlow said. "We saw a couple of times in the first half that we'd make some big plays on defense, but we'd come right back and let (Lone Tree) have some big runs. That's kind of been the story of our season."

For the fifth time in six games, Moravia can look back to one bad stretch that ultimately allowed an opponent to pull away. Unlike other losses this season, it wasn't the second half that the game get away from the Mohawks on Saturday.

Lone Tree never looked back after scoring four touchdowns in the very first quarter, building a 36-point lead in the first half that would carry the day. The Mohawks matched the Lions with a pair of touchdowns in the second half with the only difference coming on a two-point run by Viner after his fifth score late in the fourth quarter following a fourth-down stop by the Lions.

"Our line is just so small compared to the teams we've been playing this year, so it's tougher for us to get anything going offensively," Whitlow said. "I think our kids kind of lost it mentally after giving up a couple of scores. That's happened at different times this year. They're 15-18 year-old kids. We need to work at getting mentally tougher, but this just hasn't been our year. It seems like it's been one step forward and two steps back for us all season."

Never was that more evident than the start of the contest as Lone Tree scored on the opening drive on Cade Shield's 19-yard touchdown run. The Mohawks gave up 24 of the 51 yards gained on the drive on a pair of critical penalties, including jumping offsides on a fourth-and-1 near midfield.

Still, despite the tough defensive start, the Mohawks responded by stopping Lone Tree's next drive on fourth down. Gage Hanes then found Logan Johnson on a 12-yard pass as the Mohawks moved the ball inside the Lone Tree 30 with hopes of driving for a tying or go-ahead touchdown.

Instead, a chop block on a long scramble by Hanes inside the Lion 20 backed the Mohawks up. Riley Hawkins eventually fumbled after making a fourth down catch, resulting in Lone Tree (3-2) taking over possession. Viner scored the first of his five touchdowns on the very next play, dashing in from 45 yards out as Lone Tree forced back-to-back three-and-outs on defense, blocked a punt and took advantage of short fields to score two more touchdowns before the quarter ended to open a 28-0 lead.

"It hasn't just been the mistakes. We've got a lot of kids that are out with injuries right now," Whitlow said. "I've got 31 kids on the team with eight out with injuries. We've got a big freshman class with 12 kids that are on the team, but they're not quite ready for varsity. Tanner Cormeny, who rushed for 1,000 yards last year, is out. Warren McLeod, another senior who caught some passes at tight end for us, is out. Kaleb Templeton, who has been our quarterback the last few weeks, was out this week. We lost a lot of experienced kids and had to replace them with younger players. With the talent in this district, that's tough to do."

Moravia (0-6) didn't give up easily scoring on the second play of the second half when Hanes found Hawkins for a 64-yard touchdown pass, giving Mohawk fans some hope for a magical second half comeback. Moravia, could not find the same success on the next three offensive possessions with Hanes throwing his only interception to end one drive before a sack of back-up quarterback Shane Helmick ended consecutive fourth quarter drives.

"It's tough to walk away, but I'm happy that we came out in the second half and didn't give up," said Johnson, who caught six passes for 50 yards on his Senior Day. "We played hard. We didn't give up."

Moravia ended the final home game of the regular season dialing up a trick play with Helmick catching a touchdown pass from Hawkins after initially handing off the ball. The Mohawks wrap up the regular season at Tri-County next Friday before opening the Eight-Player playoffs on Oct. 16.