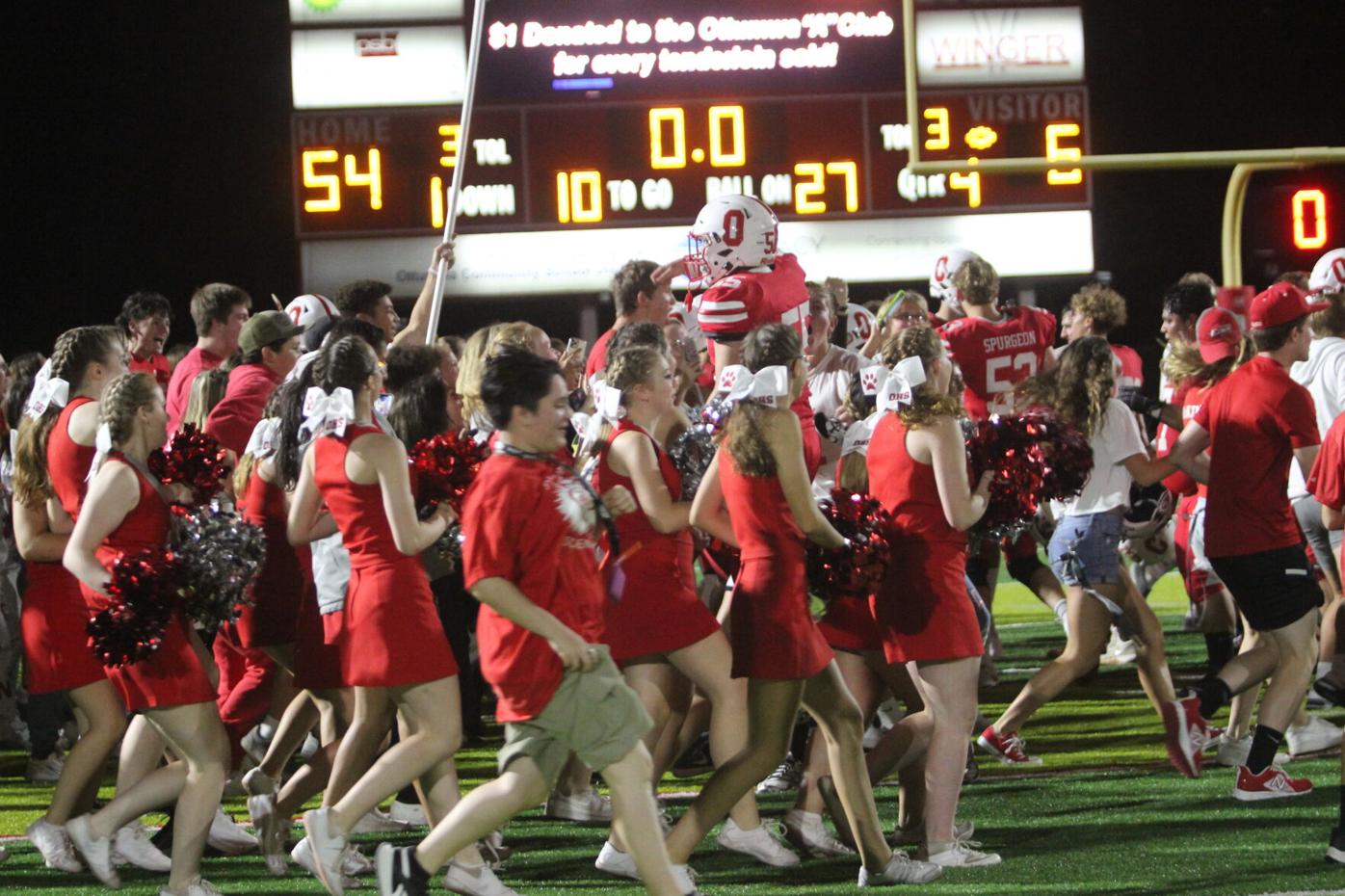 Ottumwa High School students rush Tom Kopatich Field to join in the celebration with Bulldog football players this past Friday night after a 54-6 win over Cedar Rapids Jefferson at Schafer Stadium in Ottumwa, snapping a 13-game losing streak for the Bulldog football program. 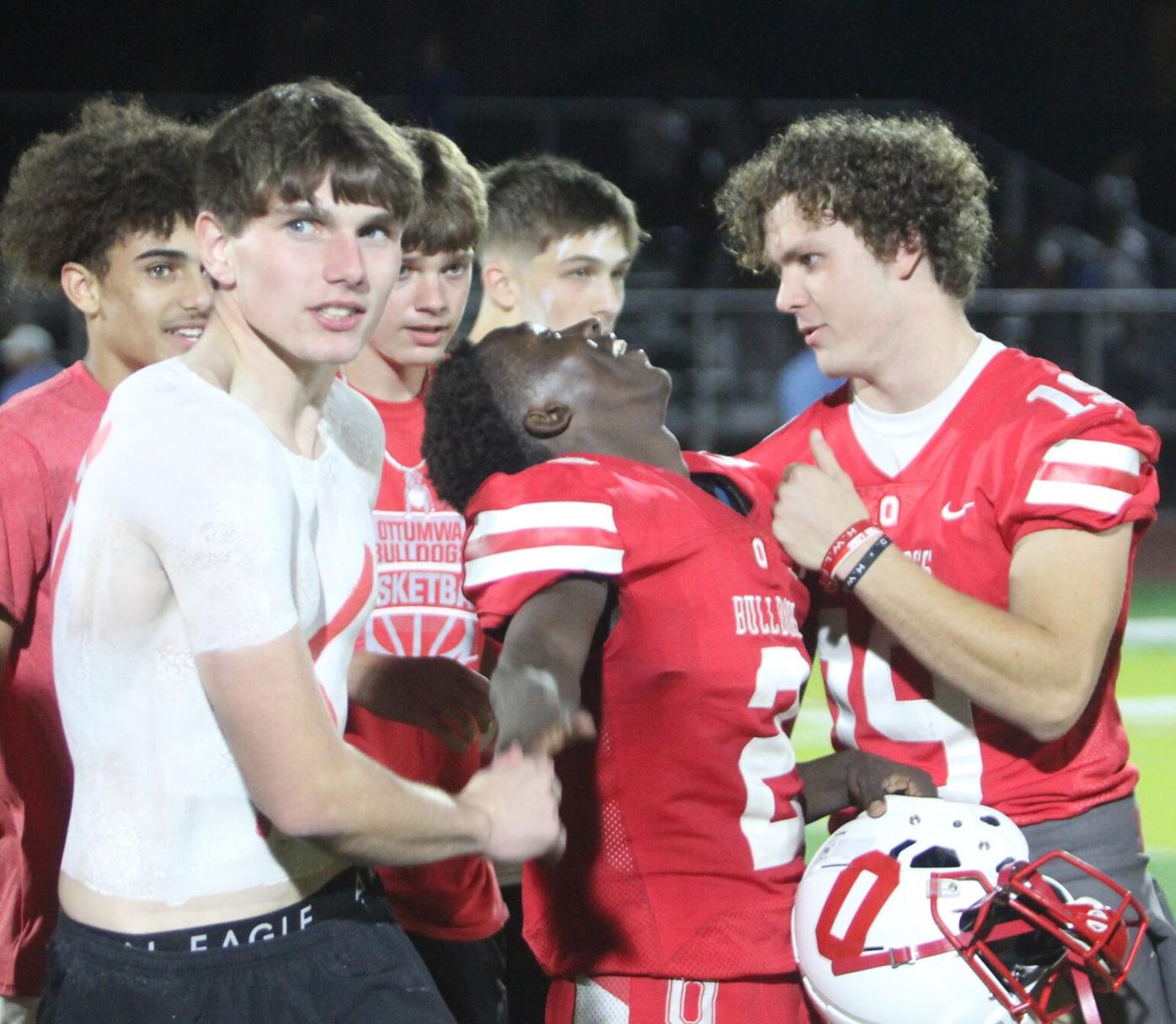 Ottumwa students and teammates, including Austin Fountain (25), celebrate with junior Abaya Selema (2) after Selema rushed for a school-record 380 yards last Friday in a 54-6 win over Cedar Rapids Jefferson at Schafer Stadium in Ottumwa.

Ottumwa High School students rush Tom Kopatich Field to join in the celebration with Bulldog football players this past Friday night after a 54-6 win over Cedar Rapids Jefferson at Schafer Stadium in Ottumwa, snapping a 13-game losing streak for the Bulldog football program.

Ottumwa students and teammates, including Austin Fountain (25), celebrate with junior Abaya Selema (2) after Selema rushed for a school-record 380 yards last Friday in a 54-6 win over Cedar Rapids Jefferson at Schafer Stadium in Ottumwa.

OTTUMWA — Officially, the number that will reside next to Abaya Selema's name will be 380 yards.

After reviewing the tape and going over all the plays, the junior running back was officially still three yards shy of cracking 300 rushing yards for the game with time winding down on Ottumwa's first win since Oct. 18, 2019.

On what proved to be his 14th and final carry of what was already poised to be a special night, Selema closed a memorable Homecoming night in memorable fashion. The junior dash down the far side of Tom Kopatich Field for his sixth touchdown run officially broke the program's 39-year single-game rushing record, giving Selema 380 yards to highlight a 54-6 win over Cedar Rapids Jefferson setting off a celebration that lasted from the end of his 83-yard touchdown run until the ensuing minutes after time expired as fans rushed out of the stands to meet the Bulldog football team for a wild postgame celebration.

"I think the guys had the chance to enjoy everything that happened on Friday over the weekend," Ottumwa head football coach Brian Goodvin said. "We've been able to look back to the game and see what worked as far as the blocking, tackling and running. Obviously, Abaya ran very well. He had that part locked down."

The end of a 13-game losing streak feels like it has injected some new life to a Bulldog football season that has been incredibly tough. Ottumwa has lost three players for the season due to injury, had to forfeit a game against Cedar Rapids Prairie due to a lack of healthy players and even had to deal with some adversity in the wake of their first win with more players dealing with health issues.

"We had a case of poison ivy where kids couldn't get their pads on," Goodvin said. "We've also had a case of player dealing with a fever and not feeling well. Fortunately, it wasn't COVID-related. It's minor things here and there, but when you're dealing with low numbers, it makes practice and preparation that much more difficult.

"Kids that are starting on offense are now the scout-team offense. They may get a few too many reps in practice in terms of keeping their legs ready for Friday night."

The reality is that Ottumwa will be running into a much stiffer challenge this week against 10th-ranked (5A) Linn-Mar, one of just two 5A schools (Iowa City High) to score at least 30 touchdowns so far this season. The Lions have proven to be dangerous on both sides of the ball, not only ranking third in 5A with 26 offensive touchdowns by producing a 5A-best 24 turnovers on defense.

"They really bring it defensively. They play fast and they play physical," Goodvin said. "They don't miss tackles. We're going to have been really fundamentally sound with our blocking and make sure we're hitting the correct holes throughout the course of the game to make sure we can have success moving the football."

Entering Friday night, Ottumwa had rushed for 413 yards as a team on 113 carries in four games. Selema had rushed 12 times for 62 yards, averaging 5.2 yards a carry.

Against Cedar Rapids Jefferson, Ottumwa rushed 447 yards on 31 carries. Selema now has 442 rushing yards on 26 carries, more than tripling his per-carry average to what is now a 17-yard average gain per run helping Ottumwa go from 615 total yards in four games (153.8 yards per game) of total offense to 1,103 in five games (220.6 yards per game).

"We talked a lot about what worked well for us on Friday and how we carry some of those positive aspects over into this week's game," Goodvin said. "We try to continue taking it one game at a time concentrating on one play at a time. I think we did a much better job of that this past Friday. We've got to carry that over to this Friday.

"Last week, there was really not a lot of adversity that we had to face where our kids were challenged to continue to focus on that next-play mentality. This week, it's going to be a challenge to make sure we're focused on the task at hand, focused on one play at a time and executing that play to the best of our ability."