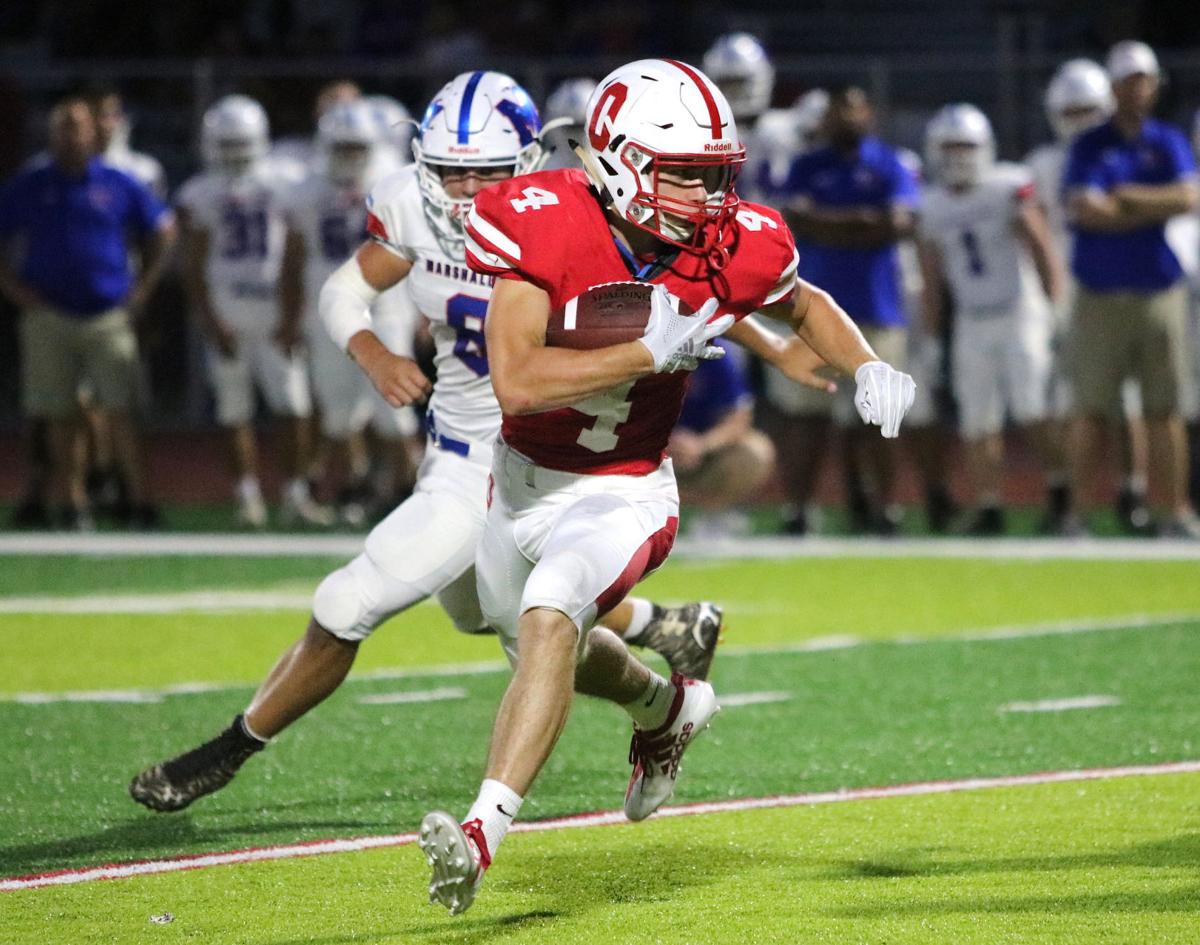 Ottumwa High School running back Kie Glosser runs away from a Marshalltown defender during a game last season. The Bulldogs will have five road games and four home games this season, with travel taking them to both the Davenport area and Des Moines area. 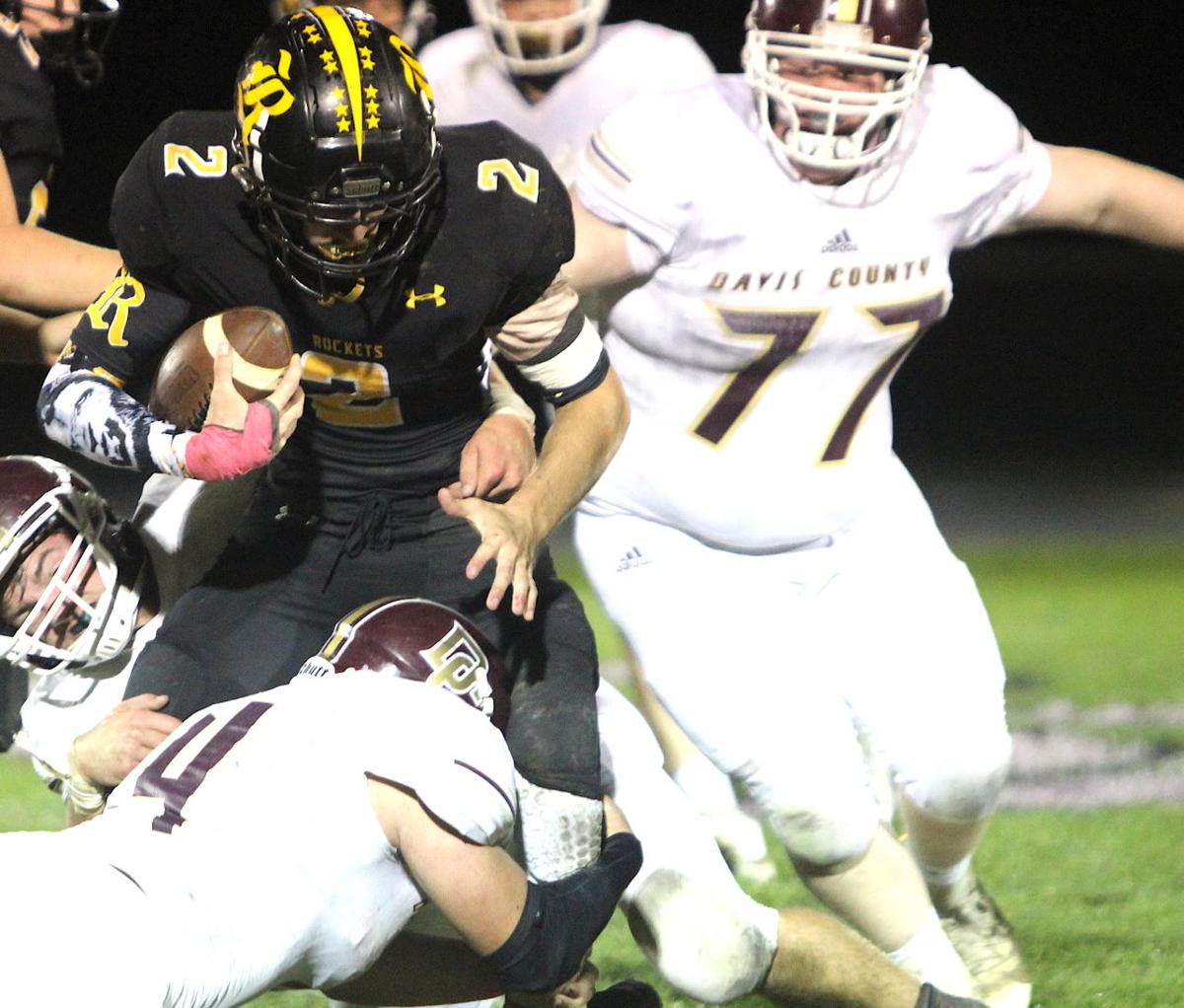 Eddyville-Blakesburg-Fremont quarterback Thane Alexander (11) takes the snap from center before with Rocket teammates Ian Roberts (2) and Alan Angle (6) preparing to run a play against the Davis County Mustangs during prep football action at Ike Ryan Field in Eddyville. The two teams will meet in the final game of the regular-season this year in Bloomfield on Oct. 23.

Ottumwa High School running back Kie Glosser runs away from a Marshalltown defender during a game last season. The Bulldogs will have five road games and four home games this season, with travel taking them to both the Davenport area and Des Moines area.

Eddyville-Blakesburg-Fremont quarterback Thane Alexander (11) takes the snap from center before with Rocket teammates Ian Roberts (2) and Alan Angle (6) preparing to run a play against the Davis County Mustangs during prep football action at Ike Ryan Field in Eddyville. The two teams will meet in the final game of the regular-season this year in Bloomfield on Oct. 23.

One could pretty much draw a large, upside-down triangle to get a sense of the Ottumwa High School football team's schedule this fall.

At the same time, the a few extra miles may also lead to a few extra wins for the Bulldogs.

The Iowa High School Athletic Association released its schedules for all six classes for the 2020 season Thursday. Ottumwa will play five road games and four at home, with two trips apiece to the Des Moines and Davenport areas.

"The travel for us is not that unusual, because ever since we've joined the CIML we've had road trips," Ottumwa coach Brian Goodvin said. "In district play we'd go to Cedar Rapids or Iowa City area, but play non-district games in the Des Moines area. The only difference this time is most of our group is out east."

The Bulldogs' schedule, like all other classes, is for just this year only as the IHSAA attempts to address measures to create more competitive balance, particularly in 4A. Ottumwa could see none, some, or all of these teams next year.

For this year, however, the schedule sets up well for a program looking to generate momentum. Four of the teams on the schedule were winless or had one win a year ago, and only Oskaloosa was a playoff qualifier. Davenport North (6-3) is the only other team had had a winning record last year.

The nine foes had a cumulative 24-58 record.

Also, the Bulldogs will face teams they haven't faced in some time. Though Oskaloosa and Ottumwa played in a two-year non-district cycle in 2014 and 2015, they were rivals in the old Southeast 7 Conference. Fairfield and Ottumwa haven't played each other since the 1990s, before the Bulldogs left for the CIML.

Burlington expressed interested in playing only a 3A schedule this year because the Grayhounds dropped a class, but added Ottumwa to the schedule late in the process. Davenport West was another school that asked the Bulldogs for a game.

"It's nice to have three of the non-district games pretty close by," Goodvin said. "Fairfield and us have been rivals in the past and the kids know each other. The schedule offers us a chance to be competitive every game.

"Yeah it's exciting for us, but it also is for the teams we're playing. A lot of the teams have struggled since 4A went to district football," Goodvin said. "It's our job to make sure we pick up our end of things."

Pekin coach Brent Blakely, who also is the school's athletic director, had mentioned in the offseason the difficulty of finding non-district opponents because of both location and playing level.

Still, he is happy with the way the non-district season broke, considering the difficulty of Class 1A District 6 this year.

"A lot of the teams we'll see non-district will help us in the district," he said. "Our schedule has teams that play a lot of power football."

The Panthers will make road trips to Central Lee and Wayne, and host Belle Plaine and Davis County before the district season begins.

"One of the reasons we wanted Belle Plaine was we're going to get a good look at north-south football," Blakely said. "And even Davis County is a big, physical team. We know our district is going to be physical, and I don't even know if we've ever seen three single-wing offenses in one district."

The Panthers are coming off a rare losing season, but will have a chance to get out of the gate quickly heading into a district that will offer contrasts, and several teams with a track record of success.

"Our schedule is a good fit for us with where we are as a program," Blakely said. "Ultimately, you win the district, you get in the playoffs."

Fairfield's schedule consists of the other five Southeast Conference schools, and the Trojans' won't have to go far outside the district either. Trips to West Burlington and Ottumwa will be the farthest journeys for the Trojans, as both Knoxville and Centerville will visit Trojan Stadium.

Albia, Davis County and EBF were split into two different Class 2A districts; the Blue Demons will face Davis County in a non-district rivalry game, but won't play longtime rival EBF this year.

Davis County and EBF will meet the final game of the regular season.

Sigourney-Keota, which missed the playoffs despite an 8-1 record last year, loaded up its non-district schedule with Mid-Prairie, West Branch, Wapello and EBF to go along with the other schools in 1A District 6.

The Cobras may have the toughest non-district schedule in the area, with four teams who were a combined 24-14. Should the Cobras miss the postseason by not winning the district, a good schedule with the RPI as a factor could boost their resume.

"That was 100 percent in the equation," S-K head football coach Jared Jensen said. "On paper, our schedule the last couple of years has been really good. Last year, it just dropped off and hurt all of us. We didn't want to get ourselves in that situation again. We knew we wanted to go look for quality teams that are going to get quality wins throughout the entire season. That was our goal for finding non-district opponents.

"We're happy with what we got. It will be an exciting time getting ready for the season this summer."

Ottumwa series records against 2020 opponents (since 1907)

The area high school football schedules for the 2020 season, arranged by week: