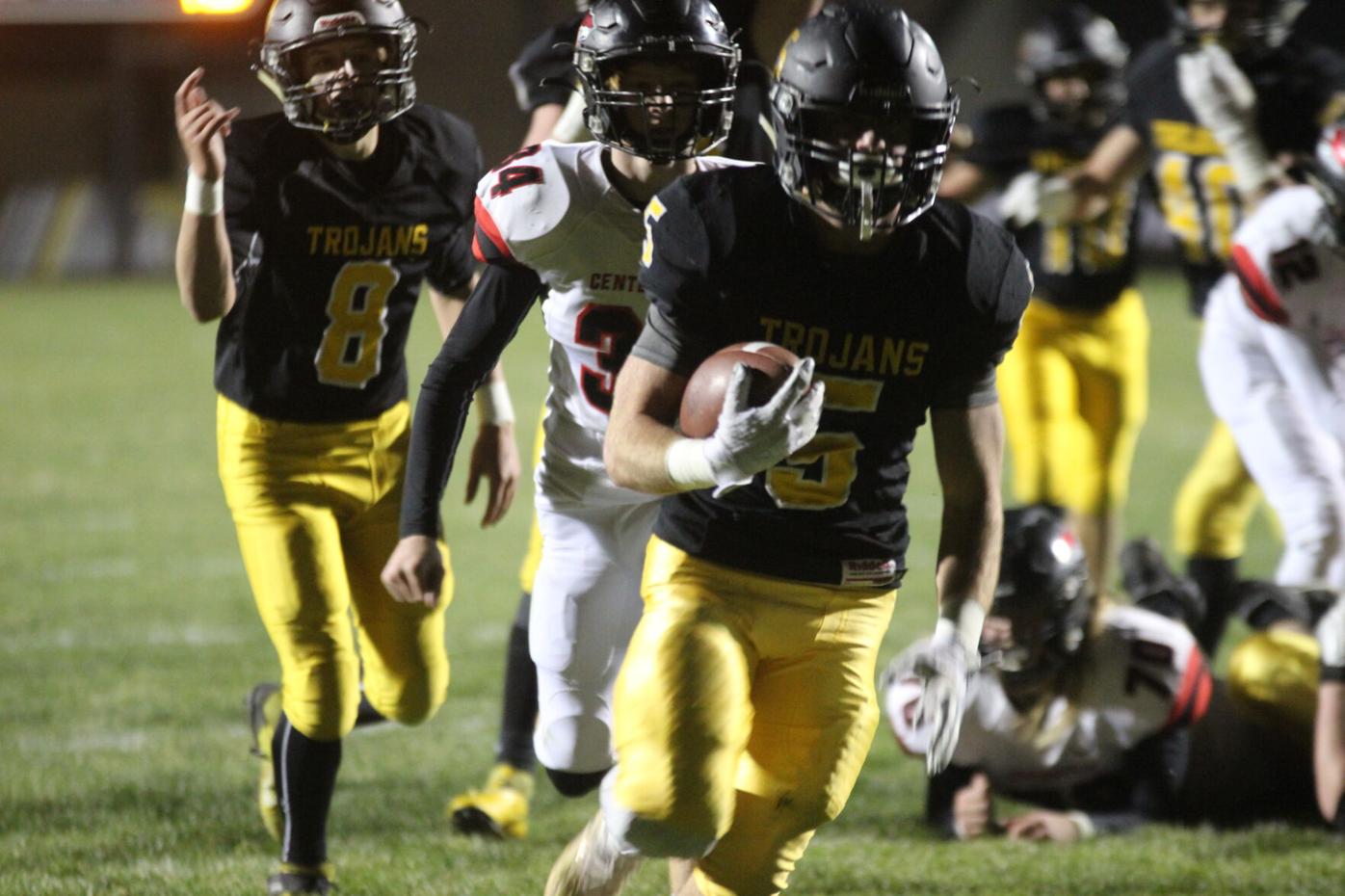 West Marshall senior Jarrin Goecke (5) rushes into the end zone while being pursued by Centerville sophomore Jax Mosley (34) on Friday night during a Class 2A second round state football playoff contest at State Center. 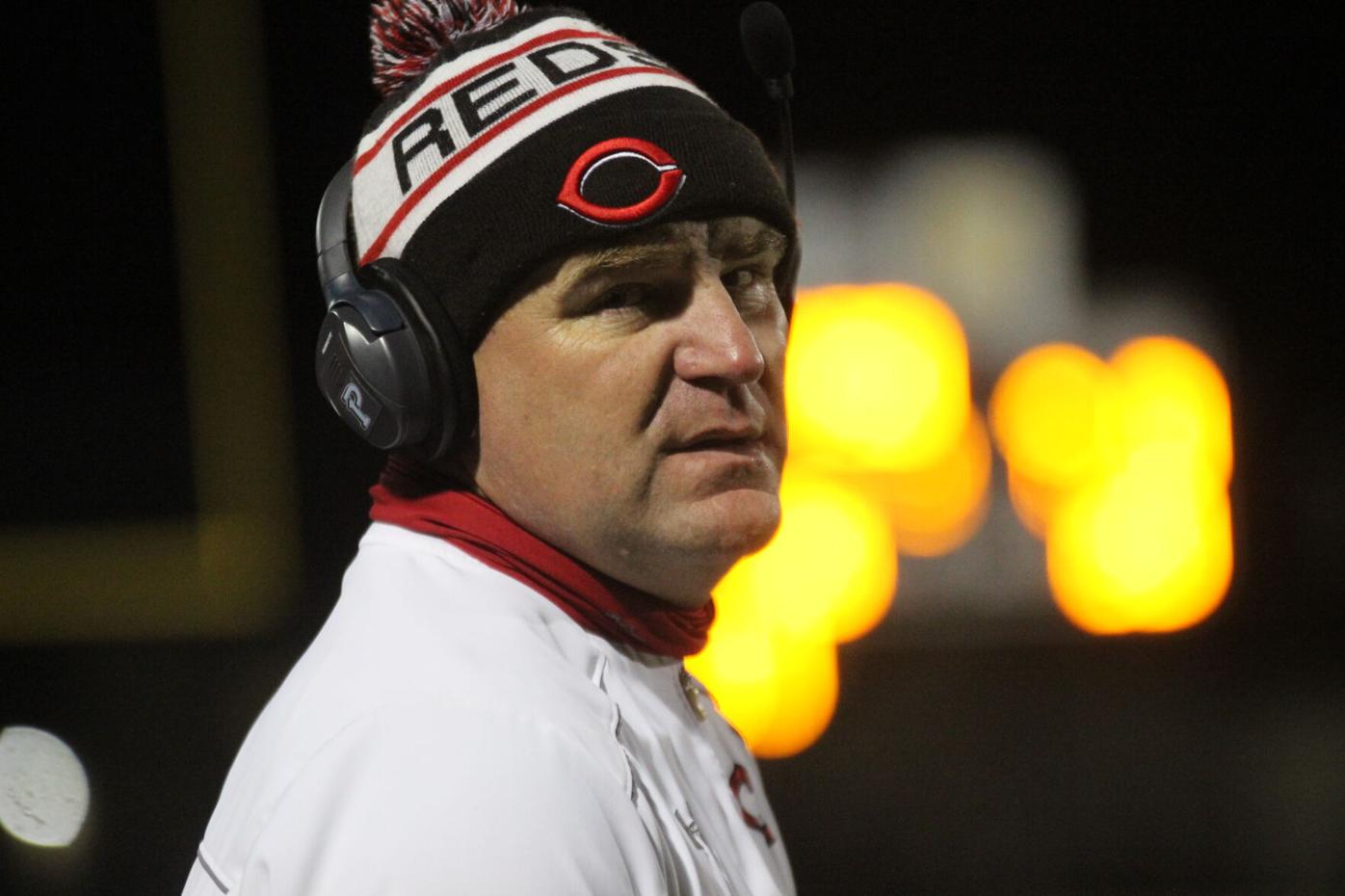 Centerville head football coach Matt Kovacevich looks on from the sidelines during the Class 2A state football second round postseason contest at West Marshall High School in State Center on Friday night.

West Marshall senior Jarrin Goecke (5) rushes into the end zone while being pursued by Centerville sophomore Jax Mosley (34) on Friday night during a Class 2A second round state football playoff contest at State Center.

Centerville head football coach Matt Kovacevich looks on from the sidelines during the Class 2A state football second round postseason contest at West Marshall High School in State Center on Friday night.

STATE CENTER — It might as well have been a target that was draped around Sawyer Wardlow's arm for the past month.

Since returning from a wrist injury sustained on Sept. 25 during a district loss to top-ranked PCM, the Centerville junior quarterback has played his position passing and running with the football all while wearing a soft cast around his non-throwing hand. That didn't stop Wardlow from racking up nearly 400 total yards of offense in the final three games of the season.

The guts of Wardlow and the guts of the Big Reds, along with a winning record, will have to serve as what endures for Centerville heading into the 2021 season. In the end, Class 2A's top rushing attack was too much to overcome in the bid to extend the 2020 season by the Big Reds this past Friday night.

Preston Pope added 192 yards to his 2A-leading total of rushing yards on the season, pacing West Marshall in a 60-0 win in the second round of the Iowa High School statewide football playoffs on Friday. The Trojans finished with 469 total yards rushing on the night, leaving West Marshall with the most rushing yards for the season thus far by any 2A team as the Trojans will carry 2,647 yards gained on the ground into their third-round contest next Friday at home against Atlantic.

As for Centerville, a final record of 5-4 with all five wins coming in the final seven weeks of the season will give head coach Matt Kovacevich something to build on heading into the offseason. Centerville's only two losses in the final two weeks were to PCM and West Marshall, two teams that very well may be on a collision course to meet in the Class 2A state championship game next month.

"We learned that it takes a lot more to play with a team like that," Kovacevich said. "If you want to be in the top 10 and you want be a rated team, there's a lot more of the things we need to do individually and as a team to get to that point."

The fight was there all night as Centerville shook off a 48-yard touchdown pass on the second play from scrimmage and a 25-yard touchdown run on the fourth play by West Marshall quarterback Peyton Hart. Centerville drove 72 yards down the field, mixing in four completions on five pass attempts by Wardlow for 38 yards with a 20-yard dash by Bradley Watts that eventually helped the Big Reds drive inside the Trojan 5-yard-line with a chance to get right back in the game.

Wardlow's throw to the end zone on fourth down, however, was too low for Kellen Johnson to dig out. It would be Centerville's deepest drive of the night and was the calm before a second quarter storm from the Trojans.

"When you get those type of opportunities to move the ball and be able to score against a team as good as West Marshall, you have to capitalize and punch it in," Kovacevich said. "If you need one yard, you have to get that one yard if you want to have the chance to be in a game like this."

Centerville would stop West Marshall for the first time after being stopped on the goal line before special teams would helped the Trojans kick off a scoring spree. The Big Reds went three-and-out after getting the ball back and had a punt blocked with a return by Kaden Davis setting the Trojans up inside the Centerville 10.

Two plays later, Pope would score his first touchdown running in from seven yards out. West Marshall would need just 11 plays in the second quarter to find the end zone four times with Jarrin Goecke's 10-yard run, Brayden Evertson's 82-yard dash and a five-yard scoring run by Pope in the final minute lifting the Trojans to a 39-0 halftime lead.

"We had a great game plan offensively that we were executing really well. There were just some self-inflicted things like penalties in the wrong spots and a couple of dropped balls that put us too far behind the sticks," Kovacevich said. "Teams like West Marshall thrive on that. We kind of shot ourselves in the foot. We had opportunities to keep possession of the football early knowing how high-powered their offense is.

"Would cashing in earlier have made a difference how competitive the rest of the game turned out? Who knows? I sure would have liked our confidence a little better had we punched in those opportunities."

Centerville finished the night gaining 175 yards of offense with Wardlow throwing for 72 yards while rushing the ball 16 times for 22 more yards gained. All told, Wardlow was involved in 34 plays on Friday against a stout West Marshall defense either throwing or running all while battling through with a wrist that was clearly not fully healed.

"It's been about four weeks I've had this cast on," Wardlow said. "The seniors have been giving it their all throughout the season. You couldn't sit it out when you see those guys giving the type of effort they give every day."

Centerville had 10 seniors that contributed one final time on the gridiron for the Big Reds. Wardlow, who threw for 1,060 yards and 12 touchdowns while scoring seven more times on the ground on 94 rushing attempts for 387 more yards, will look to continue building off the success that allowed Centerville to rally after an 0-2 start to the season.

"This football team faced a lot more adversity than a lot of people realize," Kovacevich said. "We got hit with COVID right out of the chute with starters out for the first game (at Davis County) and we ended the season with a few starters out for this game with some quarantine issues. There were also other adversities that we had to face throughout the year. The team fought through it and fought for a full nine weeks. You're always proud of your team when you win more games than you lose.

"We've been in these big games late in the season each of the last four to five years. The playoffs have been on the line. For Centerville football, that's pretty good. We think we're headed in the right direction. Hopefully, we can continue to work on getting bigger, faster and stronger to continue to play in these big games going forward."