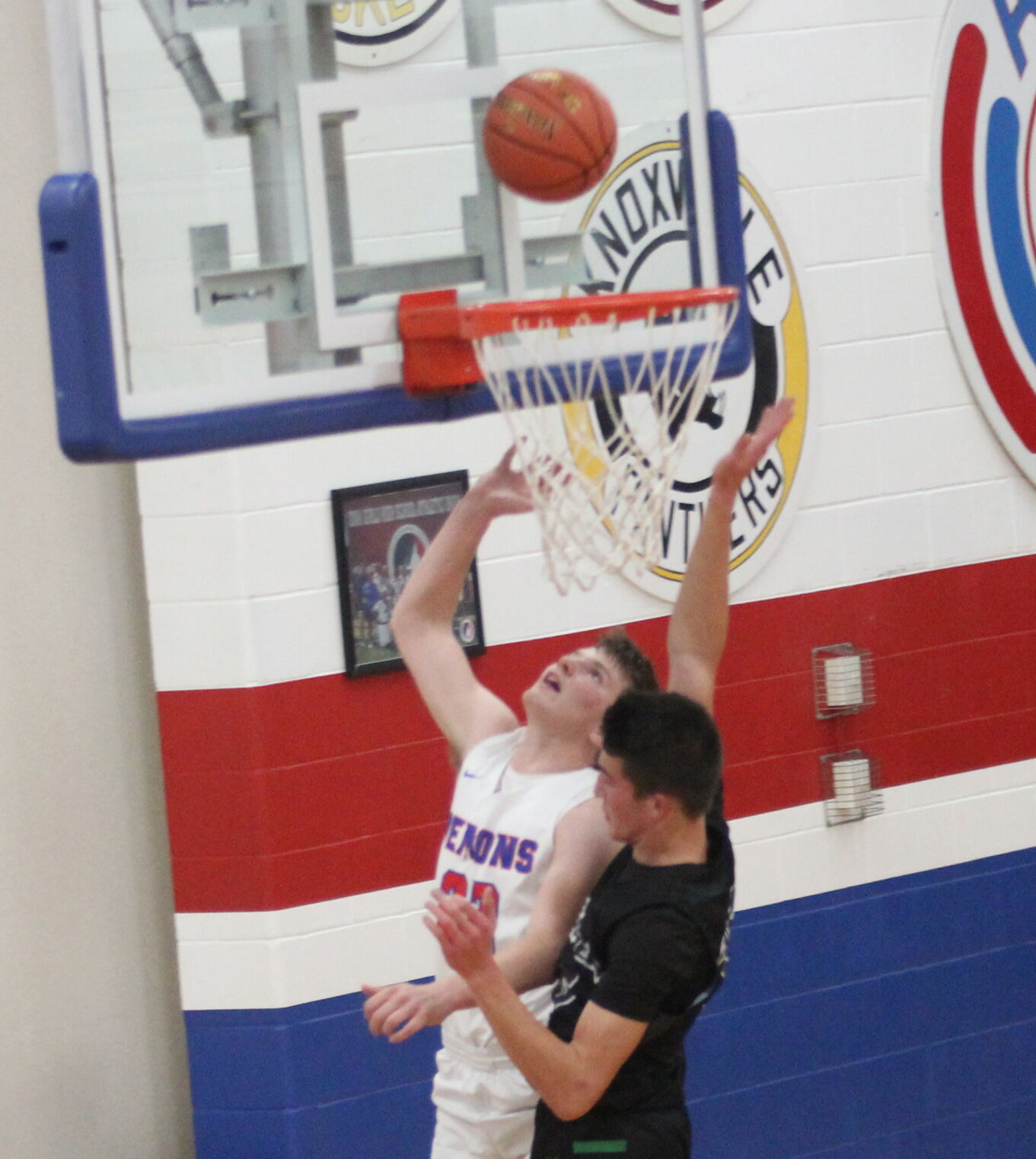 Albia senior Nathaniel Wynn goes up for a lay-up during high school boys basketball action against Grand View Christian on Nov. 30. The Blue Demons returned to the court for the first time in nearly a month on Tuesday, winning in overtime at Washington. 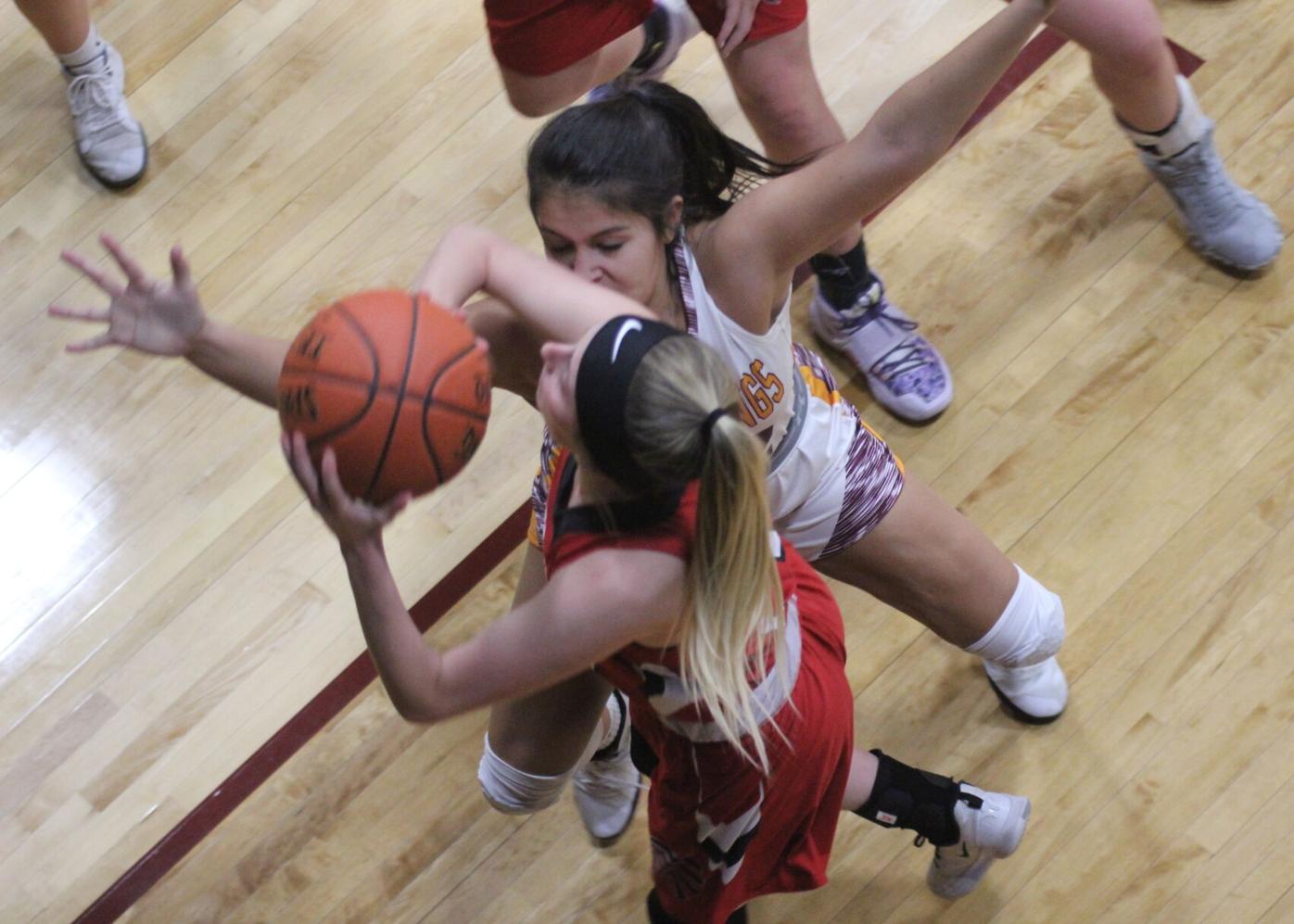 Mickey Stephens drives to the basket for the Centerville girls basketball team at Davis County on Dec. 4. The Redettes remained unbeaten on Tuesday with a 60-52 South Central Conference win at Knoxville.

Albia senior Nathaniel Wynn goes up for a lay-up during high school boys basketball action against Grand View Christian on Nov. 30. The Blue Demons returned to the court for the first time in nearly a month on Tuesday, winning in overtime at Washington.

Mickey Stephens drives to the basket for the Centerville girls basketball team at Davis County on Dec. 4. The Redettes remained unbeaten on Tuesday with a 60-52 South Central Conference win at Knoxville.

WASHINGTON – After almost a full month without a game, the Albia boys basketball team battled beyond regulation in the first game of 2021.

Drew Chance scored 26 points, including a game-tying 3-point play with 27 seconds left in the fourth quarter as the Blue Demons erased a nine-point deficit with five minutes left in regulation to earn a thrilling 64-59 non-conference win. Drew and Blake Chance combined to score 21 of Albia's 26 points in the first half to keep the Blue Demons within two at halftime.

Albia (4-1) returns to South Central Conference action on Friday against Knoxville. The two teams battled for the conference title last season with Albia prevailing with a pair of late-season wins over the Panthers.

BLOOMFIELD – Dalton Reeves led the Mustangs with a game-high 17 points, making 11 of 17 shots from the foul line to help put away a South Central Conference win.

Jake Cooley led all scorers with 10 points in the first quarter, helping the Indians open a 17-15 lead. Noah Zmolek added 15 points to led the Mustangs back in the second half while Caedyn Glosser scored 11.

PACKWOOD — Brady Millikin scored a game-high 18 points while adding 10 assists for a double-double, and the Panthers raced away to a SEI Superconference North Division victory.

EDDYVILLE – Brooks Moore posted a career-high 26 points for the Rockets, including 17 points in the first half, as EBF dominated on both ends of the court in a South Central Conference victory over the Chargers.

Ethan Davis added 16 points for EBF while Thane Alexander and Ethan Olivas each scored 10. The Rockets outscored Chariton in the second half 44-7, including a 20-0 run that lasted throughout the fourth quarter.

SIGOURNEY – Ethan Shifflett led the Savages with 22 points as Sigourney overcame a double-double from Jake Nichols, who scored 17 points and grabbed 13 rebounds, to pull away for a South Iowa Cedar League win.

FORT MADISON — Max Weaton followed up a 35-point night against Centerville with 28 points for the Trojans in a return to Southeast Conference play.

Dayton Davis led the Bloodhounds with 20 points, who opened a 22-9 lead after one quarter and led 30-18 at the half. Tate Allen drilled a trio of 3-pointers late in the third quarter to help pull the Trojans within 47-37.

Ben McDermott added 15 points and nine rebounds for Ankeny Christian, who jumped out to a 23-4 lead after one quarter and never looked back. M-U could only muster two points in the second half.

MOULTON – Jessica King had 17 points, seven steals and six rebounds for the Eagles in a Bluegrass Conference win.

"This was our best game of the year so far from start to finish," M-U head girls basketball coach Jason Ogden said. "The kids did a good job of working on some things during break and it showed. We also had some big minutes from our bench tonight as we were missing two kids due to illness."

"I have been telling the kids all year that at some point this season, we might have kids missing games and someone will have to step up," Ogden said. "I thought Zoey Hackathorn, Daisy Bradley and Stephanie Leager gave us some valuable minutes and that is huge if we can get deeper."

PACKWOOD — Kerrigan Pope led all scorers with 28 points while Erika Coleman had a double-double with 14 points and 11 rebound to lead the Pekin High School girls basketball team to a SEI Superconference North Division victory.

The Panthers held the Huskies to just eight points in the first half, opening a 25-point halftime lead.

BLOOMFIELD – Briley Lough scored a game-high 15 points, snapping a tie from the free throw line with 15 seconds left as the Mustangs won a South Central Conference thriller on Tuesday.

Sophia Young added 12 points for Davis County. Morgan Petefish scored seven of her 10 points in the third quarter, helping the Mustangs open a 34-31 lead heading into the fourth.

SIGOURNEY – Kaylee Weber followed a 20-point effort against unbeaten Winfield-Mount Union by scoring 26 points for the Savages in a South Iowa Cedar League win over the Tigerhawks.

EDDYVILLE – Emma Rector led a balanced attack for the Chargers, drilling five 3-pointers to finish with 15 points in a South Central Conference win over the Rockets.

FAIRFIELD – Payton Cline and Blake Sobaski picked up falls for Fairfield in a 54-24 win at home over Chariton, earning a split in a triangular dual with Bondurant-Farrar and the Chargers.

Cohyn Roach (138), Teddy Metcalf (182) and Cesar Smithburg (285) accounted for three falls for Fairfield in a 55-18 loss to Bondurant-Farrar. Roach pinned Gavin Lyman in 5:08, Metcalf scored his fall in 68 seconds against Jackson Hill and Smithburg needed 3:28 to pin Eric Bitters.

Cline pinned Chariton's Zach Young in 1:25 at 152 pounds. Sobaski picked up a fall against Tyler Govaert in just 25 seconds.

Fairfield (2-2) heads to Wright Fieldhouse on Thursday to wrestle Keokuk in a Southeast Conference dual.

KEOKUK – Paige Worrell led the Chiefs with a 221 average, including a 243 high game to lead all bowlers in the Southeast Conference dual at Arrowhead Lanes.

Fairfield (2-2) will host Davis County on Monday at Champion Bowl in Ottumwa starting at 2 p.m.

KEOKUK – Gavin Moeller's 214 average, including a 237 high game, led the Chiefs in a close Southeast Conference battle with the Trojans.