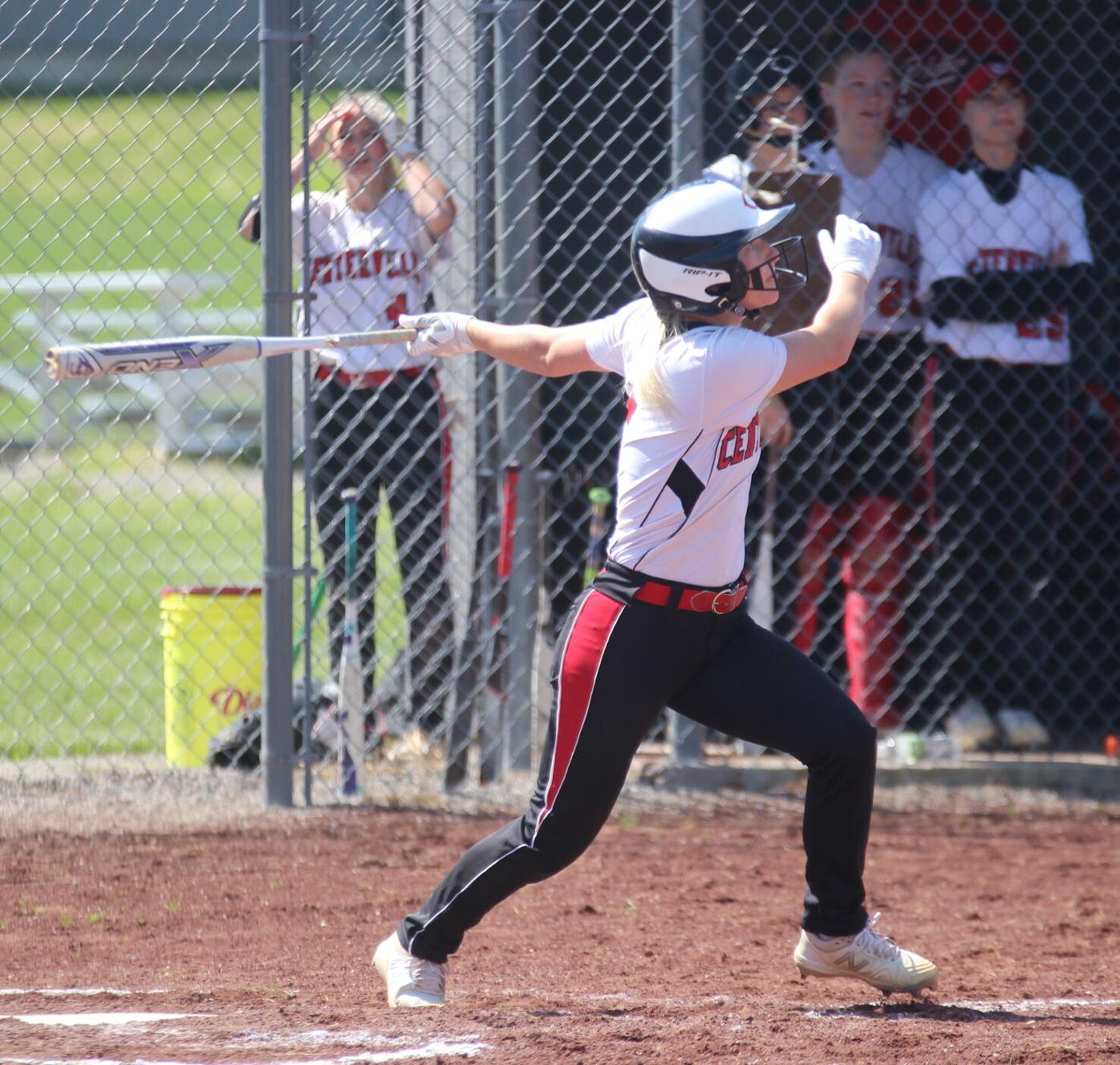 Clarie Mathews swings for a hit during high school softball action for the Centerville Redettes earlier this season against Moravia. Mathews scored three runs on Monday, including a tiebreaking steal of home in the fourth inning of a 15-5 win over Moulton-Udell. 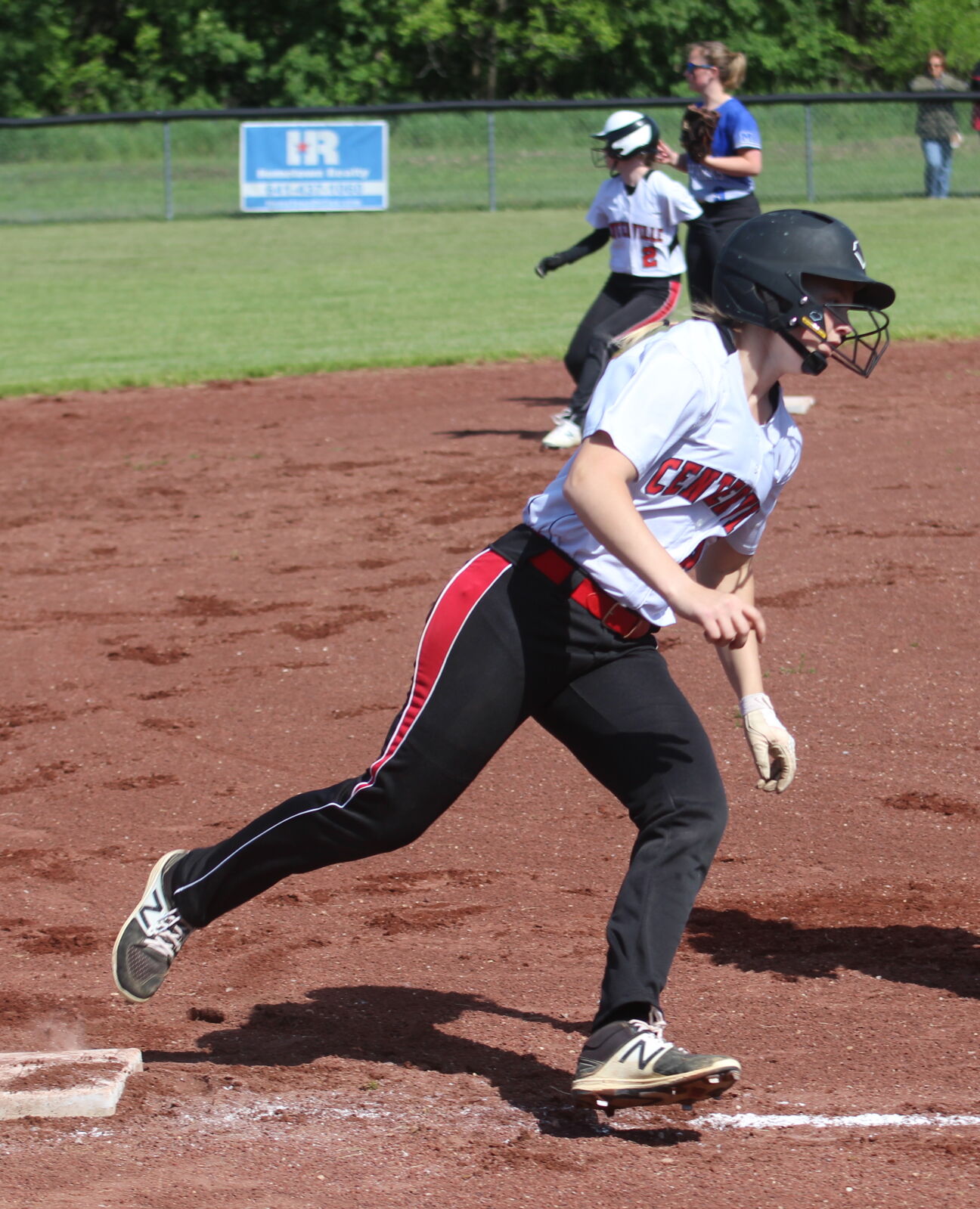 Sarah Lewis dashes around third base on her way to the plate during high school softball action for the Centerville Redettes earlier this season.

Clarie Mathews swings for a hit during high school softball action for the Centerville Redettes earlier this season against Moravia. Mathews scored three runs on Monday, including a tiebreaking steal of home in the fourth inning of a 15-5 win over Moulton-Udell.

Sarah Lewis dashes around third base on her way to the plate during high school softball action for the Centerville Redettes earlier this season.

CENTERVILLE — With one dash to home plate, Claire Mathews and the Centerville Redettes were off to the races against Moulton-Udell.

Mathews dashed home from third base with two outs in the fourth inning, scoring on a steal of home on a play that brought home the first two of 10 unanswered runs over the final two innings. After seeing an early 4-0 lead erased by the Eagles, Centerville finished the game early scoring eight runs in the fifth to clinch a 15-5 victory in a battle of Appanoose County rivals.

Centerville created havoc on the bases throughout the contest, stealing seven bases against the Eagles. Kiera Klum scored the first of four runs for the Redettes in the opening inning by drawing an errant throw while stealing third base, setting up the rally.

Breckyn Carney added a two-run single to center before the inning was over, giving Centerville (3-5) a quick 4-0 lead. Moulton-Udell (1-5) rallied back in the third, tying the game on run-scoring hits by Rachel Ogden and Grace Wood, who stole home to tie the game.

Carney singled and scored on a wild pitch in the bottom of the third, lifting Centerville to a 5-4 lead. Adriana Howard and Hannah King singled in the fourth, setting up Wood for a game-tying RBI groundout that again brought M-U back to even with Centerville at 5-5.

Mathews picked up the win in the pitching circle after drawing a one-out walk in the fourth and moving to second on a single by Sarah Lewis. After moving to third on a wild pitch, Mathews stole home as part of a double steal with Lewis, who scored from third on a passed ball two pitches later giving the Redettes a 7-5 lead.

Centerville put the win away with six hits in the bottom of the fifth. Carney finished a three-hit night with an RBI single that scored Mathews, who led the Redettes with three runs scored while striking out nine batters over five innings.

BUSSEY — Sophia Young struck with a clutch two-out RBI double in the fifth, lifting the Mustangs to a thrilling win in the first of two games against the Sabers that featured stellar pitching perfomances.

Sydney Henderson won the opening-game dual over Ali Mockenhaupt for the Mustangs, allowing just one run on four hits and four walks while striking out five batters. The Sabers (12-5) threatened to tie the game in the bottom of the seventh, putting two runners on before Kisha Reed was picked off at third after a sharp single to left by Jetta Sterner.

Grace Bailey got the best of Madison Dunlavy in the second game, shutting out Davis County (9-2) on four hits and two walks on eight strikeouts. Dunlavy struck out 14 batters in six innings for the Mustangs while Macy Hill doubled and matched Young with two hits in the nightcap.

MOUNT PLEASANT — Hannah Simpson homered and drove in four runs in each game of a Southeast Conference doubleheader sweep for the third-ranked (4A) Trojans.

Simpson finished with six hits, eight RBIs and scored six of Fairfield's 31 runs against the winless Panthers. Delaney Breen added three hits in the second game for the Trojans, matching Simpson with four runs driven in.

NORTH ENGLISH — Macy Fisch and Amiya Smallwood drove in Kaylee Weber and Courtney Hemsley in the top of the fourth inning, lifting the Savages to a South Iowa Cedar League road win over the Bears.

Goodwin pitched a complete-game, three-hit shutout for the Savages (6-3, 4-0 SICL). The freshman ace allowed just one walk and struck out 16 batters.

COLUMBUS — Nicoa McClure tripled and drove in two runs at the plate while pitching a four-inning complete-game shutout in the pitching circle, snapping a six-game losing streak for the Comets.

Alexia McClure helped back up her younger sister at the plate, going 2-3 for Cardinal (2-7) with a double, a triple and a run scored in the Southeast Iowa Superconference crossover contest. Caitlyn Reber added a single and drove in two runs for the Comets.

Brooke Miller collected two hits and drove in three runs at the top of the batting order for the Panthers (2-3, 2-2 SEI north) while striking out six batters in the pitching circle. Alex Parsons singled and scored twice.

MORAVIA — Lauren Long singled twice and scored one of three runs for the Mohawks, who fell just short in a non-conference battle with the Cardinals.

Hallee Hamilton hit a solo home run while adding a triple for Central Decatur, who built leads of 3-0 and 4-1 before holding on as Moravia (5-7) scored twice in the sixth but couldn't push the tying across home plate in the final two innings.

DES MOINES — The state tournament may not be played in Des Moines this summer. That didn't stop two state tournament hopefuls from getting together on the home field of Grand View University.

Max Burt pitched a two-hit shutout for the perennial 1A state championship contender Newman Catholic out of Mason City, who jumped out to an early 8-0 lead and never looked back. Bennett Suntken collected three hits to lead the Knights at the plate, matching five teammates with two RBIs and six teammates by scoring two runs in the four-inning victory over the Big Reds.

MOUNT PLEASANT — Nate Woodburn led a breakout night at the plate for the Trojans, going 3-4 in game one with a triple, two RBIs and two runs scored in a long slugfest to open the Southeast Conference doubleheader at the Mapleleaf Athletic Complex.

NORTH ENGLISH — Bo Schmidt capped the most explosive night at the plate for the Savages in nearly two years with a fifth-inning grand slam. Sigourney drew 18 walks in the victory, including six in an 11-run first inning.

MORAVIA — Kale Rockhold collected three hits, including a double, while driving in two runs for the Cardinals in a postseason rematch that snapped a four-game winning streak for the Mohawks.

Moravia jumped out to a 3-1 lead after just one inning, shades of last year's Class 1A regional semifinal contest between the teams. The Mohawks (4-3) scored five runs in the first inning last July before the Cardinals rallied, scoring three runs in each of the first two innings before catching the Mohawks with a tying run in the third and went ahead for good with four runs in the bottom of the fourth earning an 11-7 victory.

PEKIN — Chandler Stull and Brady Latcham each collected a pair of hits and scored a pair of runs for the Panthers in a Southeast Iowa Superconference north division win.