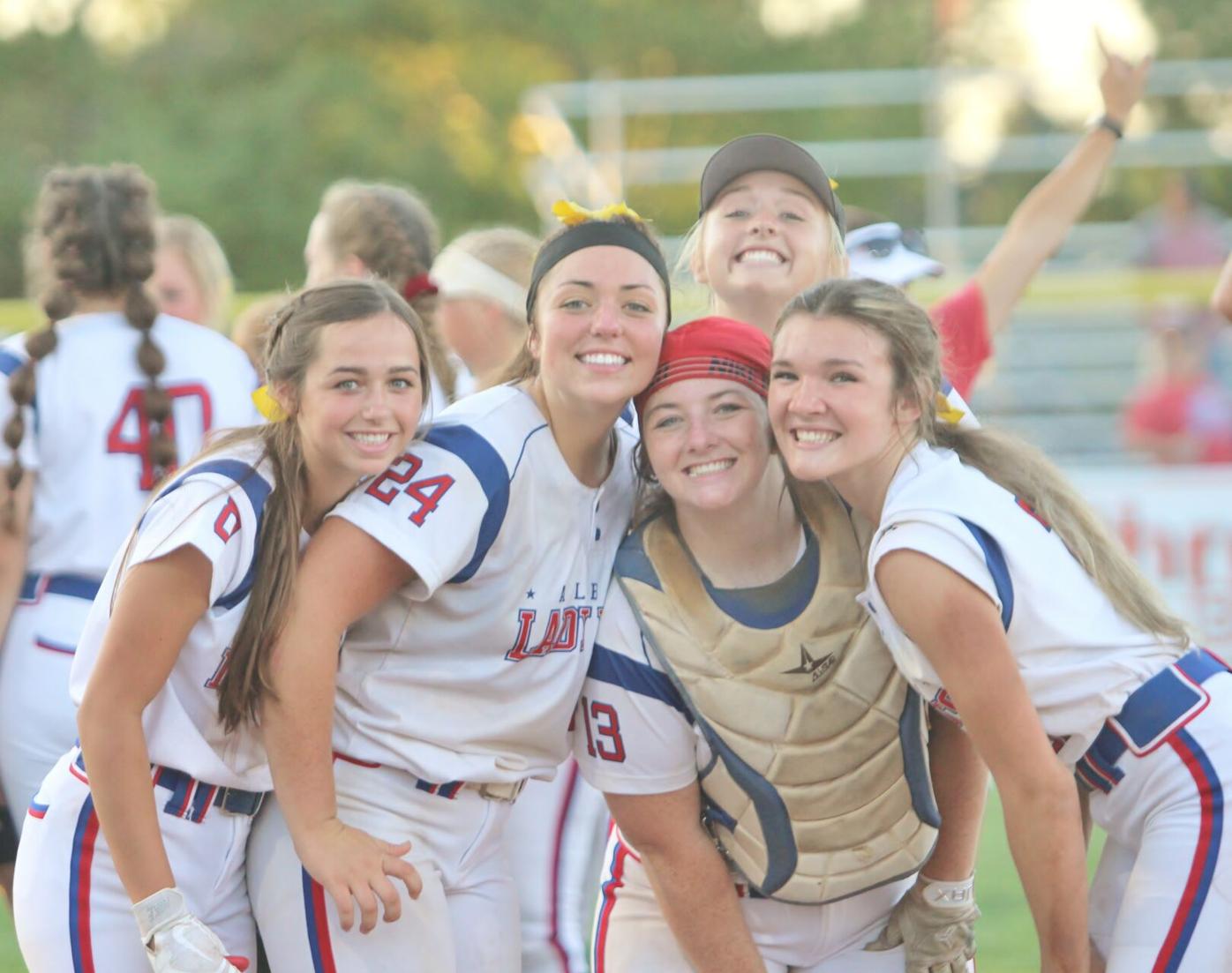 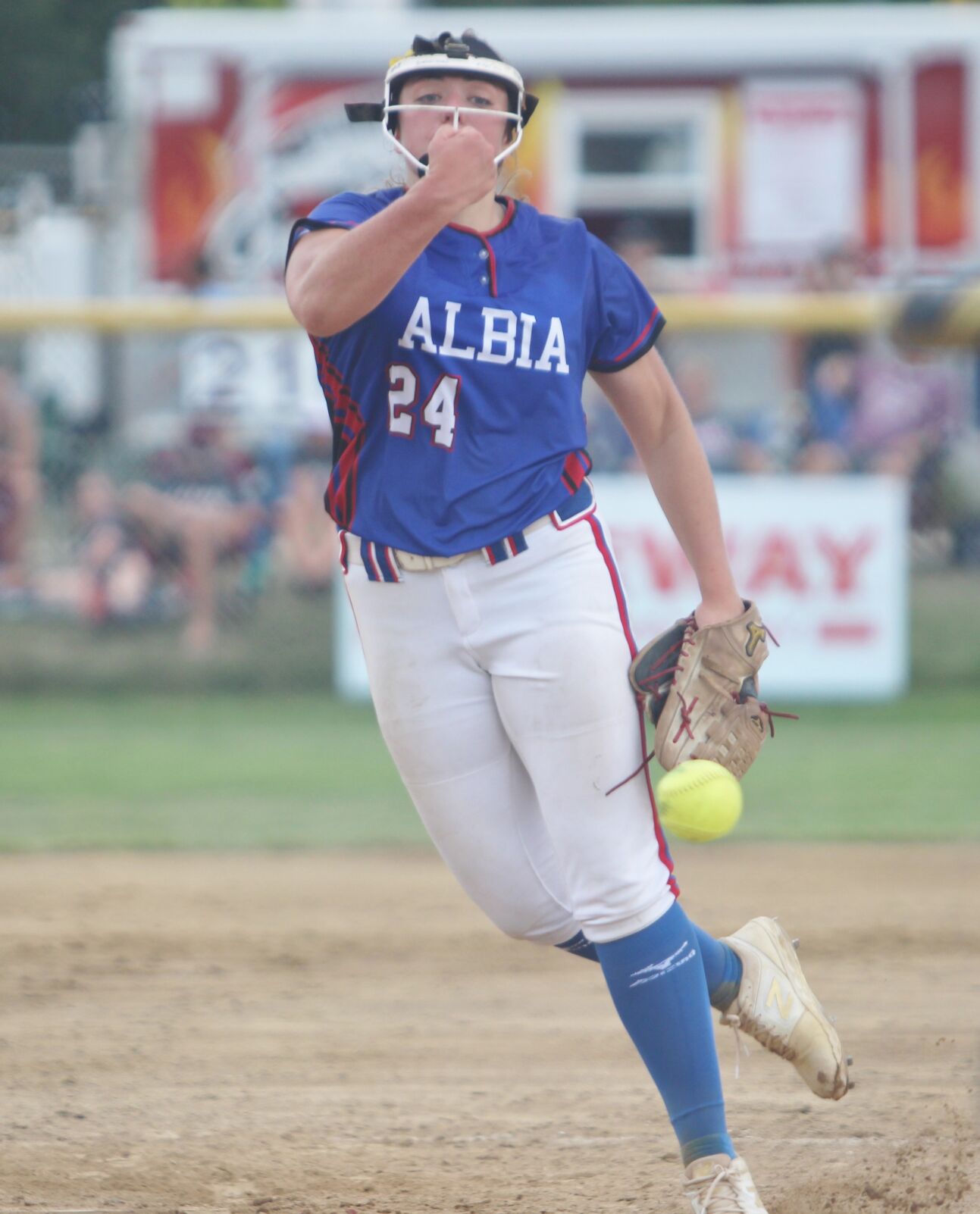 Albia senior pitcher Jena Lawrence fires home a pitch during Wednesday afternoon’s Class 3A state softball semifinal contest against Mount Vernon on the Dodger Diamond at the Harlan and Hazel Rogers Sports Complex in Fort Dodge. Lawrence earned her 100th career pitching win in a 2-1 victory over the fifth-ranked Mustangs, sending the top-ranked Lady Dees to the Class 3A state softball championship game on Friday against third-ranked Williamsburg. 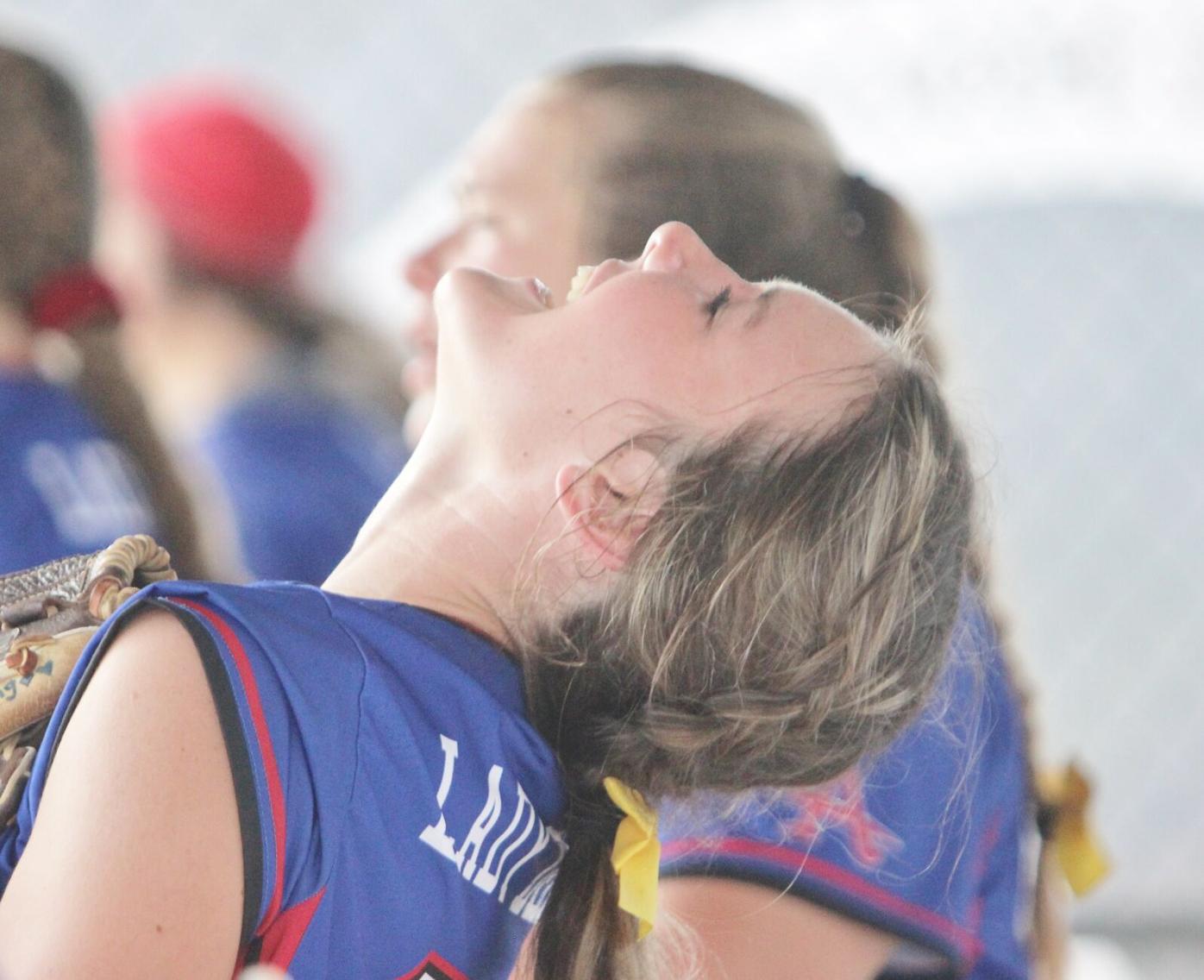 Albia senior pitcher Jena Lawrence fires home a pitch during Wednesday afternoon’s Class 3A state softball semifinal contest against Mount Vernon on the Dodger Diamond at the Harlan and Hazel Rogers Sports Complex in Fort Dodge. Lawrence earned her 100th career pitching win in a 2-1 victory over the fifth-ranked Mustangs, sending the top-ranked Lady Dees to the Class 3A state softball championship game on Friday against third-ranked Williamsburg.

FORT DODGE — They came in together winning a state championship as Monroe County Little League teammates.

On Friday, they can go out together as state champions. The script simply needs the perfect ending to be written.

Albia High School seniors Jena Lawrence, Alex Beard, Abbey Griffin, Abigail Martin, Makenna Ross, Ellie Spurgin and Jade Boland will all play their final games in the red, white and blue of the Lady Dees. It will be the second time in program history that Albia has played for a state softball title with the same upperclassmen helping guide the program to a surprising championship game appearance in 2017.

Three years later, the Lady Dees have accomplished a lot. Winning a state title is all that remains on the check list for the Albia seniors of 2020.

“We’ve been chasing that goal every since our eighth-grade year,” Albia senior pitcher Jena Lawrence said. “Me, Alex and Jade going to be fortunate enough to go on and play college softball, but for a lot of the girls this is going to be their last game. I know they want to go all the way.

“We’ve been chasing this. We’ve been working so hard. We’ve put in so much effort in the batting cages and out on the field throughout the offseason. It means everything to us right now.”

Lawrence officially secured a milestone win on Wednesday, earning her 100th career victory in the pitching circle, an honor that will earn the future Creighton Blue Jay a return to the 2021 state softball tournament next year to take her place in the Iowa Girls High School Athletic Union Hall-of-Fame. Over the past six years, Lawrence has pitched in almost every big game possible from the state championship game against Davenport Assumption in 2017 as a freshman to a Central Regional championship game as a member of the Monroe County Little League team three years earlier with a ticket to the Little League World Series on the line.

While there have been some big wins along the way, Lawrence has also had to deal with some tough losses including back-to-back postseason losses to Assumption in the 2016 regional final and the 2017 state title game. The team has also had to deal with heartbreak off the field during their run, including the tragic death of classmate Pete Sarver right before opening regional tournament play against Davis County in 2018.

All those experiences, according to Lawrence, have made the Lady Dees ready to step up on the grandest state of Iowa high school softball.

“We’re a lot older. We’re a lot wiser. We’re much more experienced and we know a little more what we’re doing,” Lawrence said. “We’re the old guys on the team now. We should know what we’re doing. It’s weird to think we’re the veterans now after being the young kids on the team for so many years. Now, we’ve got eighth graders and freshmen that are learning from us when we were just in that same position not that long ago.

Albia had figured to be facing Davenport Assumption one last time in Fort Dodge. The Knights not only beat Albia in the 2017 state finals, but have won three straight state tournaments all of which featured the Lady Dees in the eight-team field.

While Albia did their part, winning 2-1 over Mount Vernon on the strength of a sixth-inning home run by Abigail Martin, Assumption did not. Williamsburg scored in the top of the seventh on a two-out error and held on in the final inning for a 5-4 win, setting up a rematch of the 2018 regional final won by Lawrence and Lady Dees over the Raiders 2-0 in Albia two years ago.

The two teams were supposed to wrap up the regular season against each other earlier this month, but the threat of possible season-ending exposure to the coronavirus led to both teams agreeing to cancel the game. Now, the Raiders and Lady Dees will wrap up their respective softball seasons with one final showdown at Kruger Seeds Field.

“I guess it’s good because they haven’t seen us this year. They can’t say they’ve seen me pitch this year and know what to expect,” Lawrence said. “We just have to be prepared. We can’t get too high. We can’t get too low. We just need to be focused and have fun while we’re doing it.

“There’s going to be a lot of emotions going out there. We just need to give it all we’ve got.”